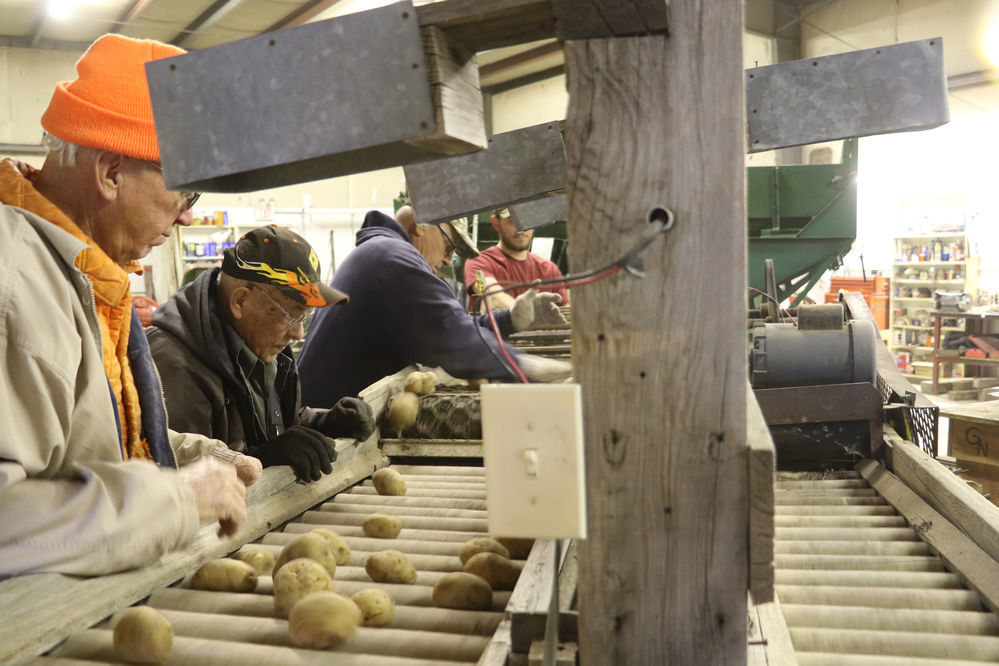 Legacy of the plains volunteers, (left to right) Gery Warner, Alvin Kuxhausen, Dale Mahnke and Nate Holloway assist in the sorting process, putting to use a potato sorter manufacture in the 1940s. 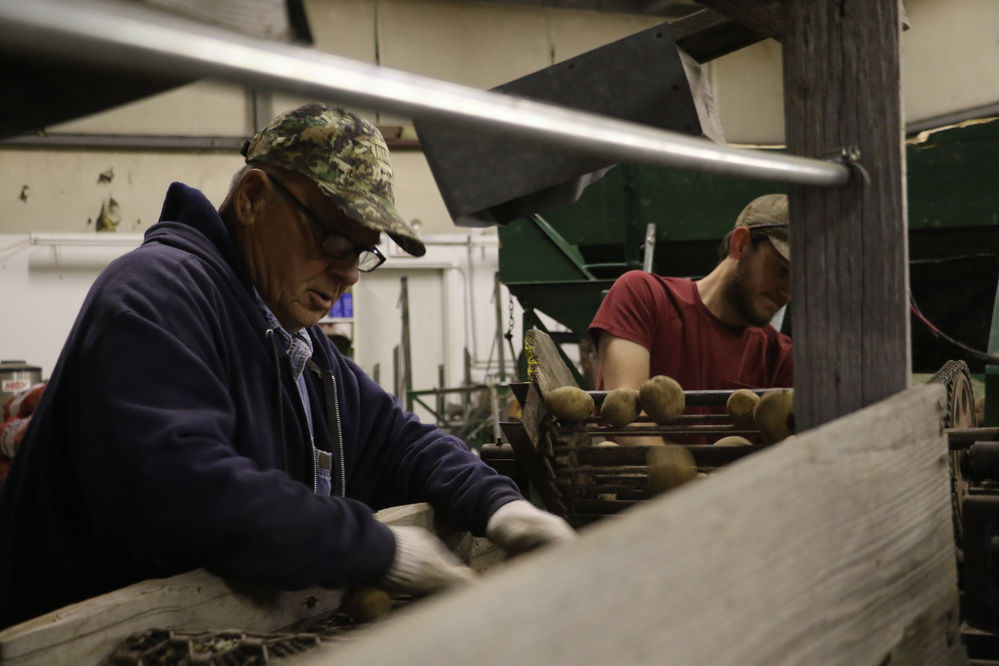 Legacy of the Plains volunteer, Dale Mahnke (left) and Nate Holloway (right) help sort potatoes through a 1940's piece of equiptment , allowing the smaller seed potatoes to fall through the conveyer. 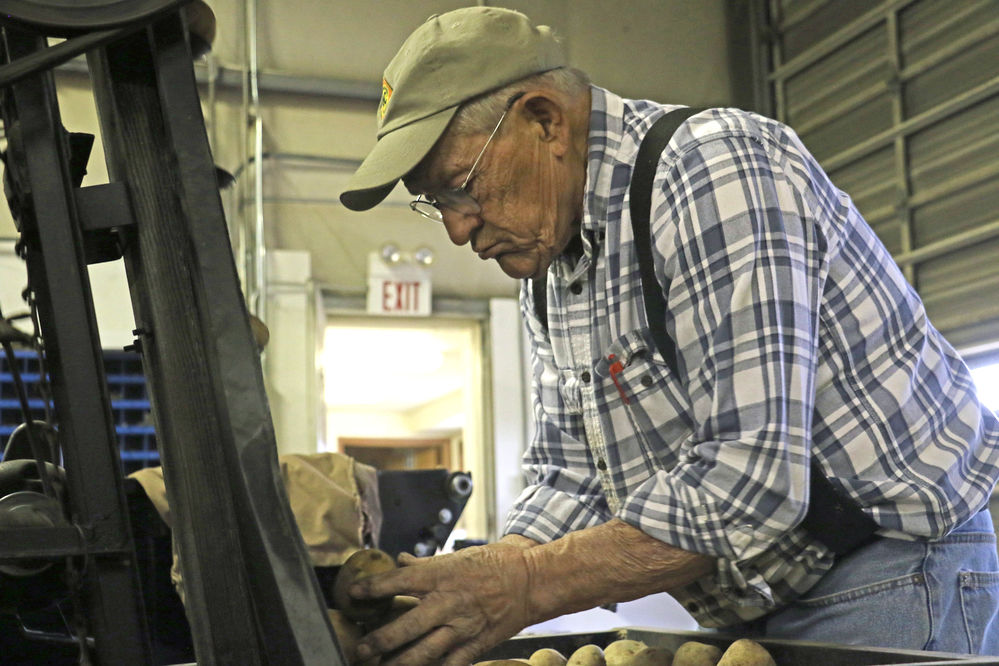 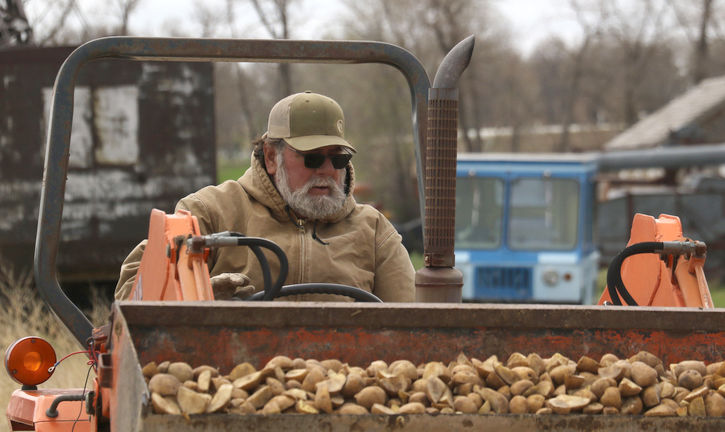 Legacy of the plains volunteers, (left to right) Gery Warner, Alvin Kuxhausen, Dale Mahnke and Nate Holloway assist in the sorting process, putting to use a potato sorter manufacture in the 1940s.

Legacy of the Plains volunteer, Dale Mahnke (left) and Nate Holloway (right) help sort potatoes through a 1940's piece of equiptment , allowing the smaller seed potatoes to fall through the conveyer.

Legacy of the Plains museum volunteers took a step back in time as they put a restored 1940s potato sorting, cutting and planting equipment to use in the early production phases of the museum’s annual potato crop.

Equipment dating back more than 70 years is put to use every growing season at Legacy of the Plains, but most interestingly, it is put to use by volunteers who recall a time when this equipment worked the ground of farms across the panhandle.

“This was the equipment we used as a kid,” Dick Kuxhausen museum volunteer said.

Getting involved in the agriculture production and education process is what keeps himself and other volunteers coming back year after year, Dick said.

Dick said he often gets asked whether the museum will be growing potatoes.

“At the Harvest Festival, the people get to come and pick potatoes right out in the field,” Dick said, “People ask me all the time if we will have potatoes this year, because they look forward to it so much.”

A unique event, allowing community members to get involved in the agricultural process that brings food to grocery stores across the nation, is an important part of what goes on at Legacy of the Plains, he said.

Operating solely on donations, potatoes grown in the fields of Legacy of the Plains are a possibility due to annual seed potato donations from Thompson Seed, a family operation in Alliance, volunteer Bill Vaughan said.

“Without Joe and Dan Thompson, we wouldn’t be able to do this and they deserve all the credit,” Bill said.

All of the machinery used at Legacy of the Plains has also been donated by community members, then refurbished and maintained by the volunteers, allowing proper function of the equipment for ongoing crop production, Dick said.

This years early phases of potato production began differently than years in the past, starting off with the potato cutting process. A process which is not always necessary, Dick said, as new planting equipment has the ability to plant seedling potatoes that range in size.

However, the 1940s two-row international planter put to use at the museum can only handle smaller seedling potatoes, Dick said.

“The new planters can plant practically any size of potatoes, but the old ones will break unless we split them down to size.”

The cutting process used is something that many of the volunteers remember from their early years of potato production in the Panhandle, when they spent days cutting potatoes by hand, volunteer Gary Warner said.

Dick said, the 1940s equipment used for the sorting, cutting and planting process originated in Gering and continues to hold a unique historical value.

Educating the public about the agricultural process proves to be the most rewarding aspect that Dick and the other volunteers take away from donating their time at Legacy of the Plains, who have hopes of continuing this tradition for generations to come.