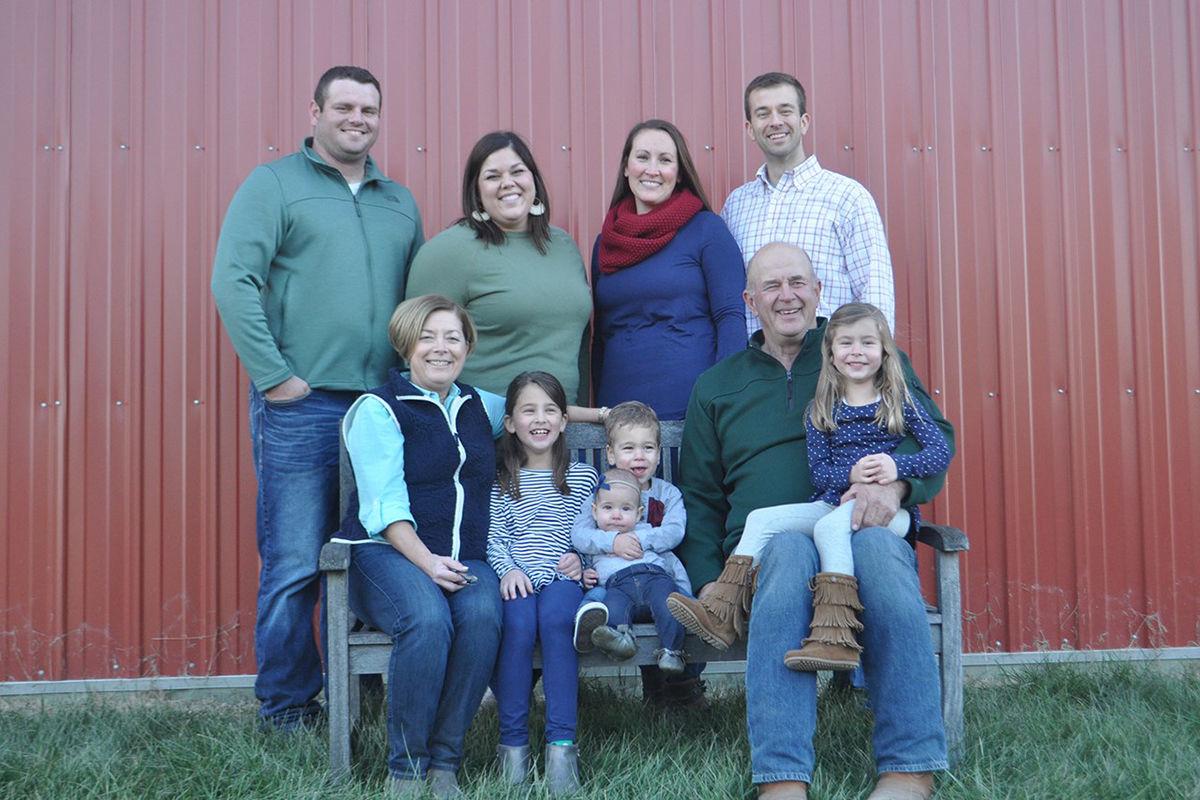 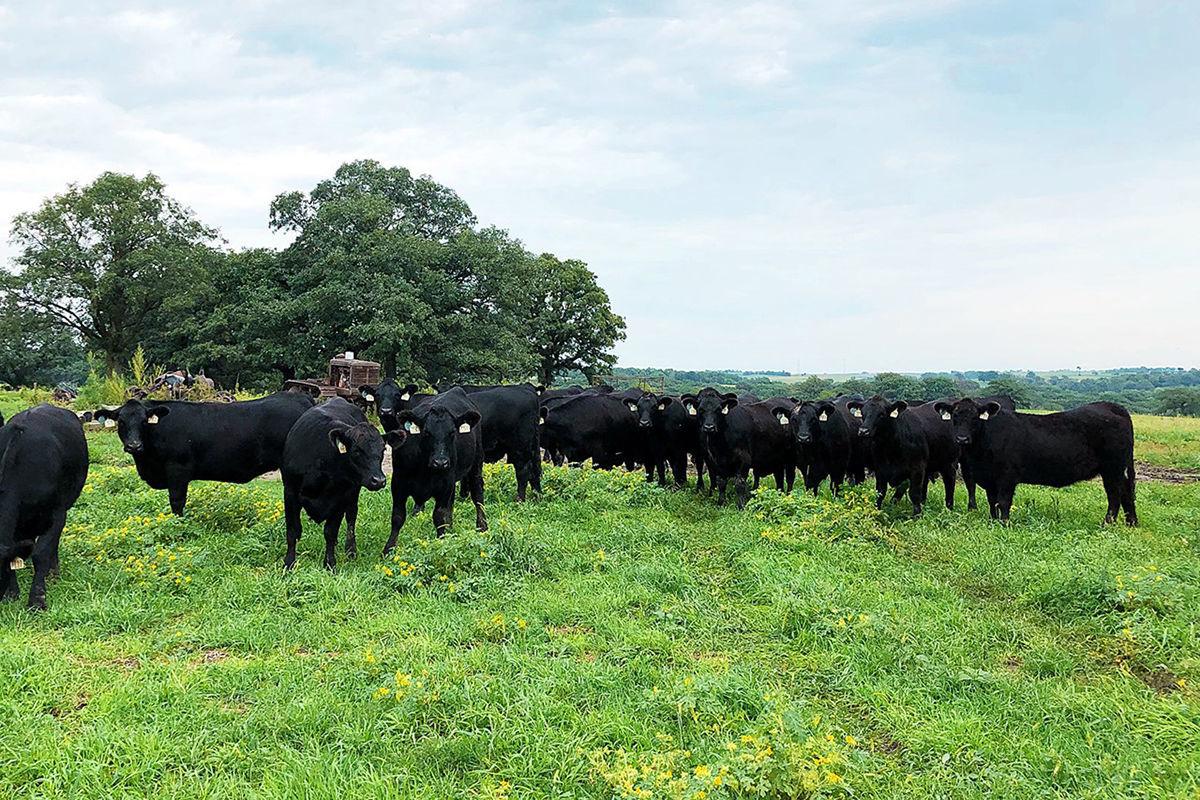 Cattle mill about on land farmed by the Euken-Myers family of Cass County. The farm, which is going through a generational change, earned the Iowa Cattlemen’s Association 2020 Iowa Environmental Stewardship Program Award for the family’s dedication to working to leave the land better than they found it.

Cattle mill about on land farmed by the Euken-Myers family of Cass County. The farm, which is going through a generational change, earned the Iowa Cattlemen’s Association 2020 Iowa Environmental Stewardship Program Award for the family’s dedication to working to leave the land better than they found it.

The line of succession continues on a family farm in Cass County.

Since the late 1980s, Randy and Jill Euken have farmed a swath of land outside Lewis, 10 miles south of Atlantic, raising cattle and growing corn and soybeans. Randy and Jill are moving to Atlantic while their daughter Michelle Myers and son-in-law Steve Myers take over the homestead.

“We feel very blessed that our daughter and son-in-law want to farm,” Jill Euken said.

Jill Euken’s great grandfather, grandfather and his brothers purchased the farmland in 1912. Both Eukens grew up with cattle on family farms and showed cattle as 4-H members, according to information provided by the Iowa Cattleman’s Association.

“We got married and we knew we were going to farm and try to make the best of it,” Randy Euken said.

“We had the advantage of legacy,” Jill Euken added.

Over the past 40 years, they have continued to grow and improve their cattle herd by carefully selecting replacement heifers and bulls, keeping and utilizing an extensive set of records, implementing the best practices for environmental stewardship and carefully tending to beef nutrition and herd health, the Iowa Cattleman’s Association said.

Throughout that time, the farm has included both row-crops and cattle. The land is utilized with erosion and water quality in mind, with the highly erodible ground growing pasture or hay.

Now, the family has put in place a farm transition plan that is transferring management and operation of the beef and farming enterprises to their daughter and son-in-law. Over the past three years, Michelle and Steve Myers have purchased and improved their own farm and purchased half of the Eukens’ cow herd. They are retaining ownership of their calves in the family feedyard and are carrying on the legacy of environmental stewardship in their farming and cattle enterprises.

Randy added: “They’re more prepared than we were.”

And the Myers are moving to the homestead. They’re the fifth generation in the family to earn a living from the farm.

The Eukens and Myers currently have approximately 165 cows and 30 head of replacement heifers, the Iowa Cattleman’s Association said. They also feed out their own calves and others in a 400 head feedlot, and purchase feeder cattle that are custom fed elsewhere.

The family manages pasture and hay ground in addition to row-crops. The row-crop acres are farmed with an extended rotation including alfalfa hay.

And while they’re moving to town, Randy and Jill Euken aren’t retiring.

“I told them they needed to be there, and I’ll commute,” Randy Euken said. “I’m not quitting. I’m far from quitting.”

“Retiring is not a goal right now,” he added, chuckling, “That’s down the road.”

The farm earned the Iowa Cattlemen’s Association 2020 Iowa Environmental Stewardship Program Award for the family’s dedication to working to leave the land better than they found it.

“A lot of times, if you make the extra effort it pays you back dividends. Maybe not in your lifetime, but for the next generation,” Randy Eucken said. “We tried hard to keep the soil in place. Upgrade it with nutrients and management. And hopefully leave it better than when we found it.”

Reducing emissions has become front and center for the agriculture industry today, the association said. The Eukens and Myers utilize many practices on their row-crop operation to reduce emissions, including improvements to their grain-drying systems and reduced tillage. Increased yields over the years have also reduced emissions on a per acre or per unit level.

The land has an incredible ability to store and utilize carbon, but certain farming practices can increase or decrease carbon sequestration. Through cover crops, minimum tillage and application of manure, the Eukens and Myers have been able to increase soil organic matter, according to the association. This increase in organic matter has made their land more profitable and healthy, and has increased its ability to store carbon.

The family has been able to utilize these healthy soils to more sustainably grow crops, feed cattle and help keep the carbon in the soil and out of our atmosphere. Cover crops have become a big part of no-till, organic, and livestock production the last couple of years. A big part of this reason is due to the efficiencies and unique tools that cover crops provide. Feed, bedding, tillage, and increased organic matter are just a few of the examples of what cover crops provide, including various ways for a farmer to be more sustainable, the association said.

“Sometimes the rain doesn’t always fall when you want it,” Randy Eucken said. “If you can keep the water there, all the better.”

The National Cattlemen’s Beef Association’s Environmental Stewardship Awards Program began 28 years ago. The regional winners for the national award will be announced in late July, with the Eukens and Myers competing against nominees from Missouri, Minnesota, Illinois, and Wisconsin.