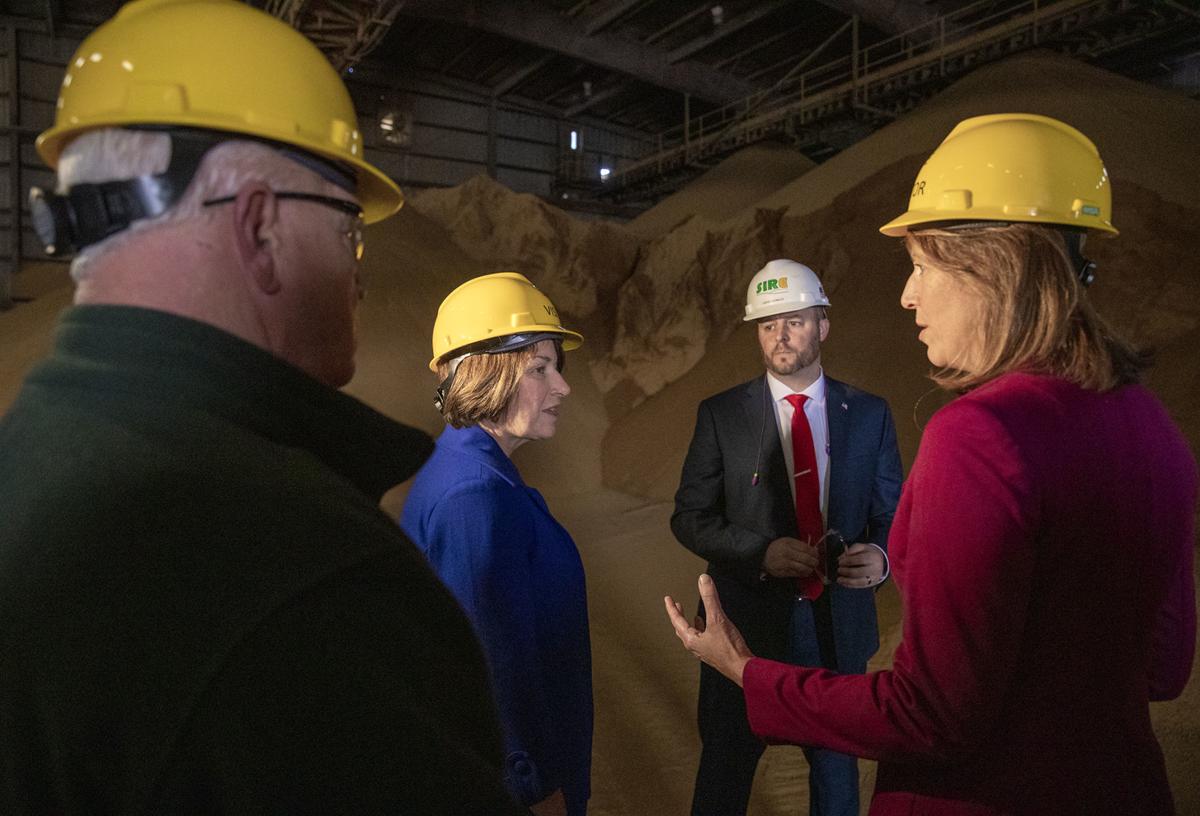 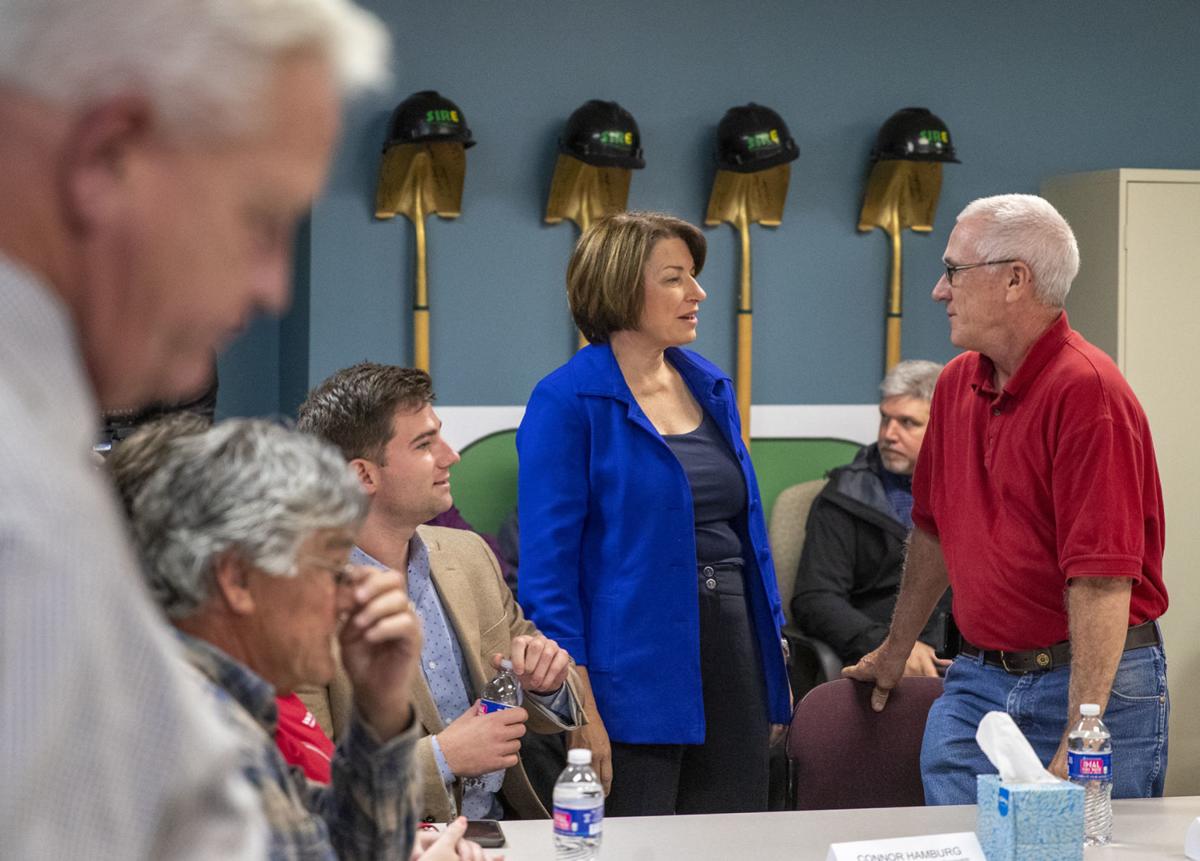 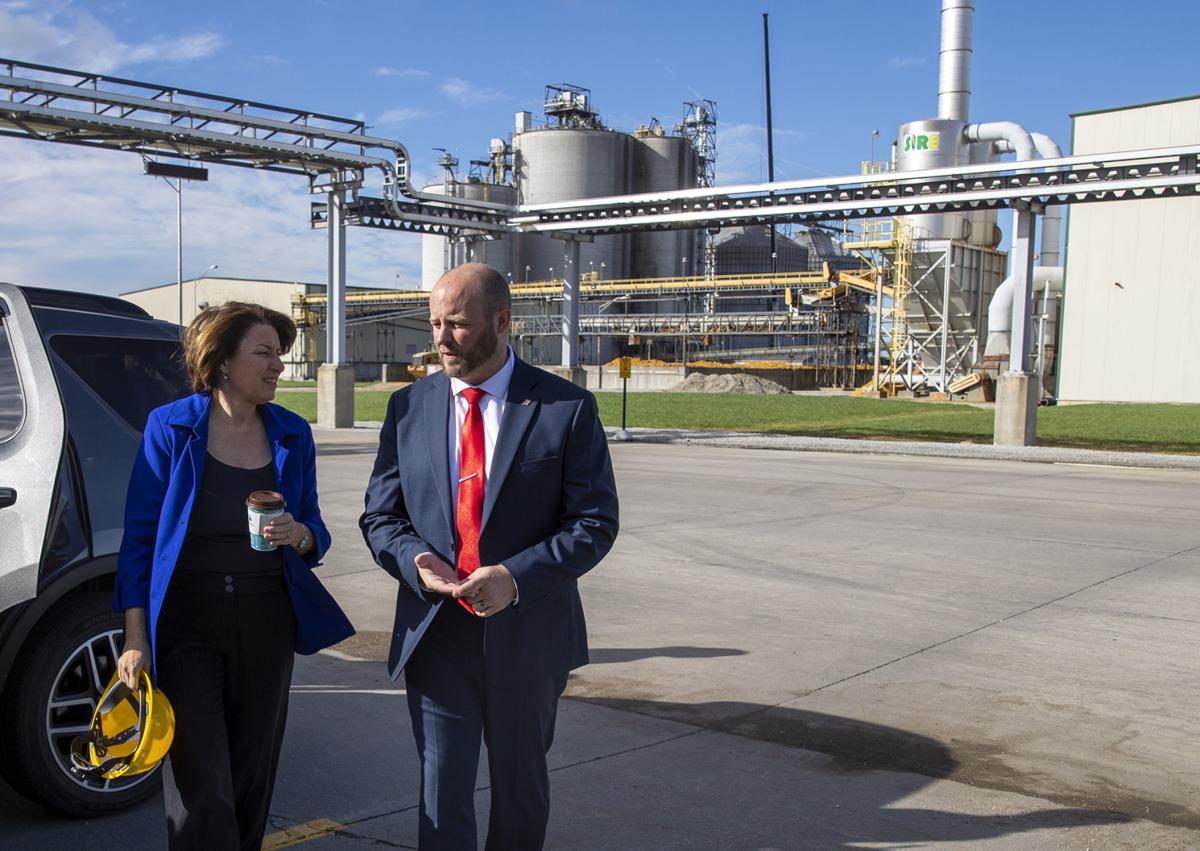 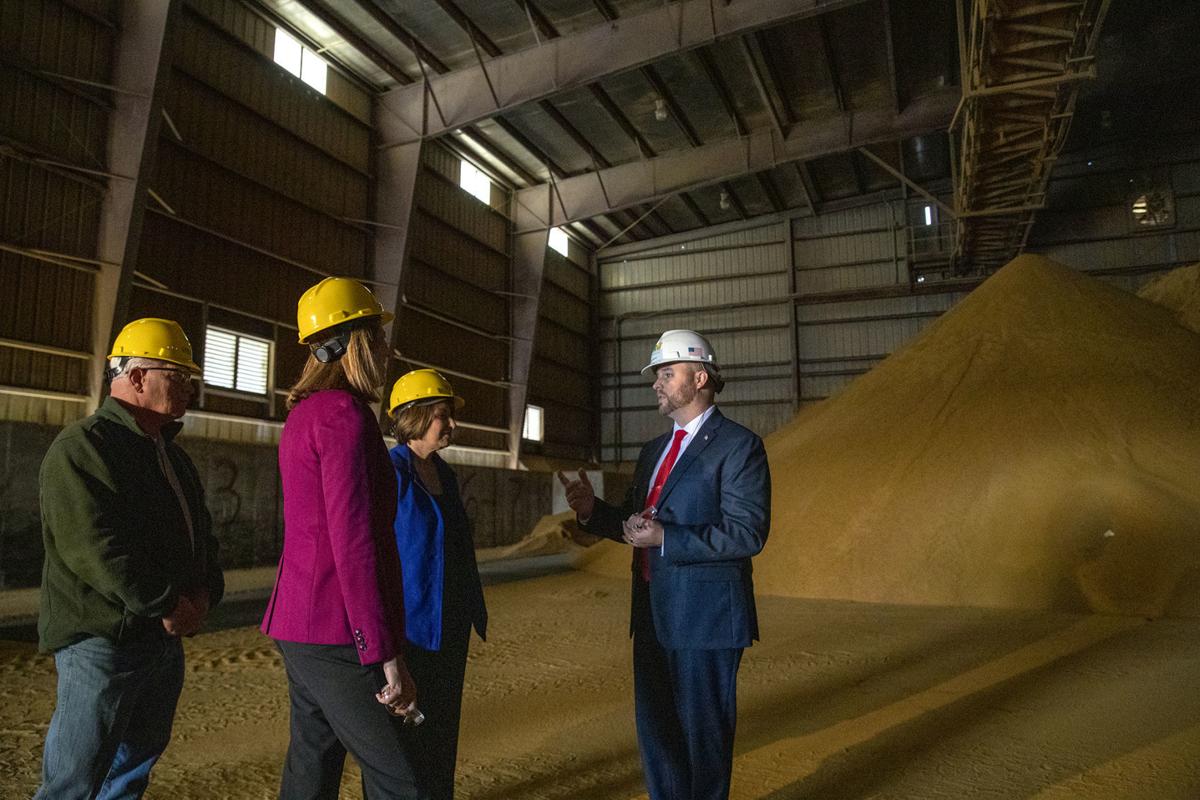 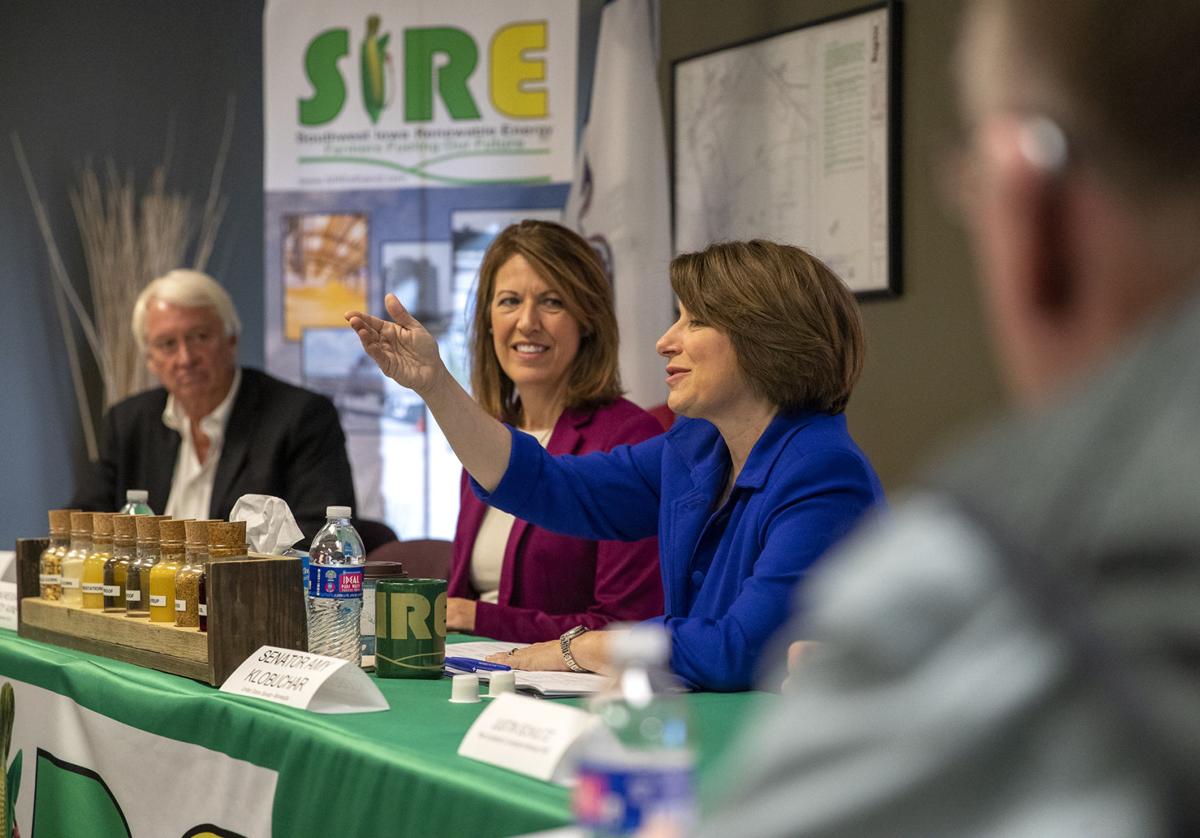 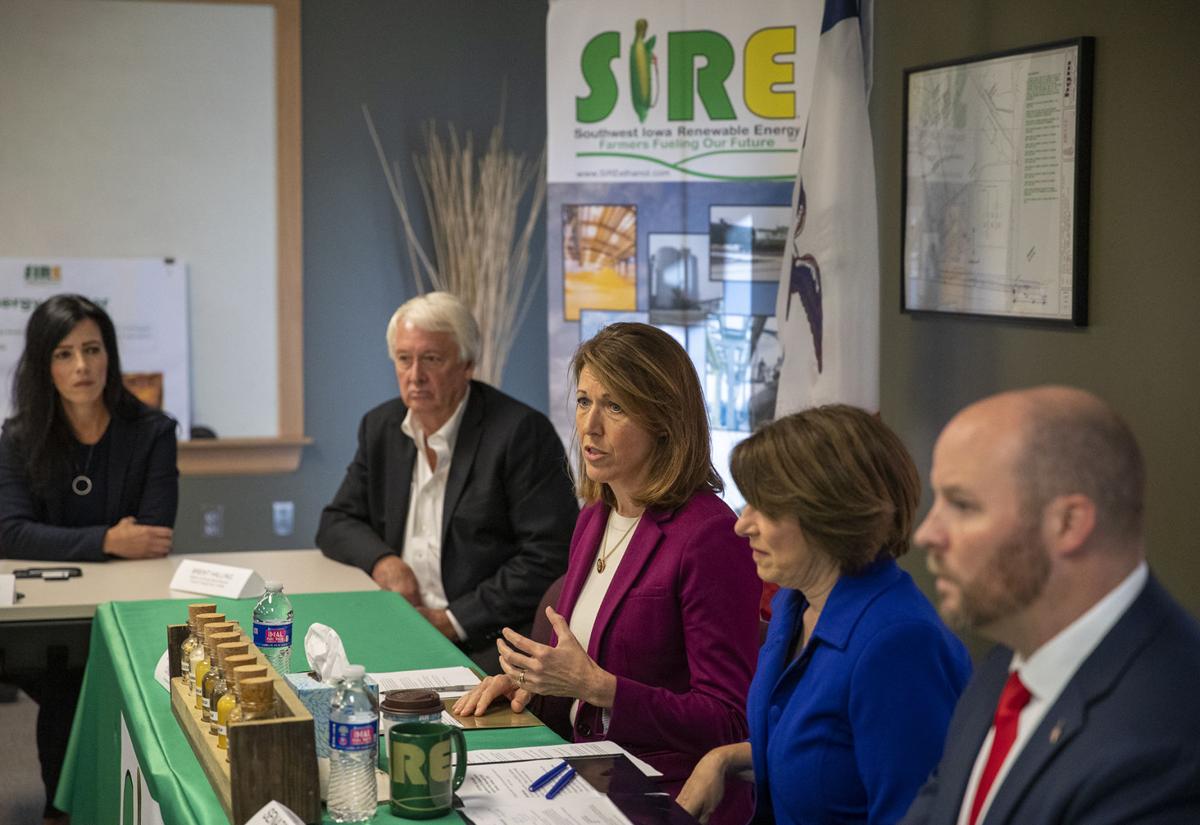 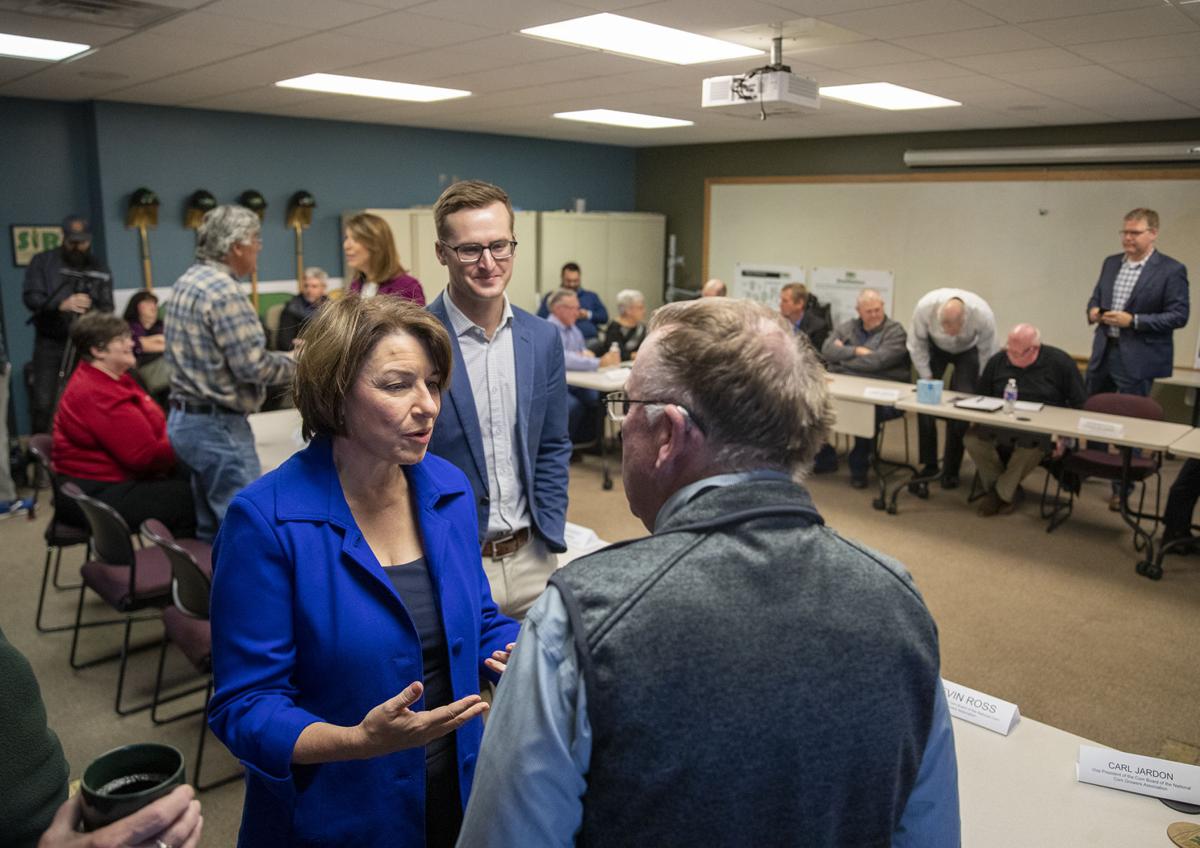 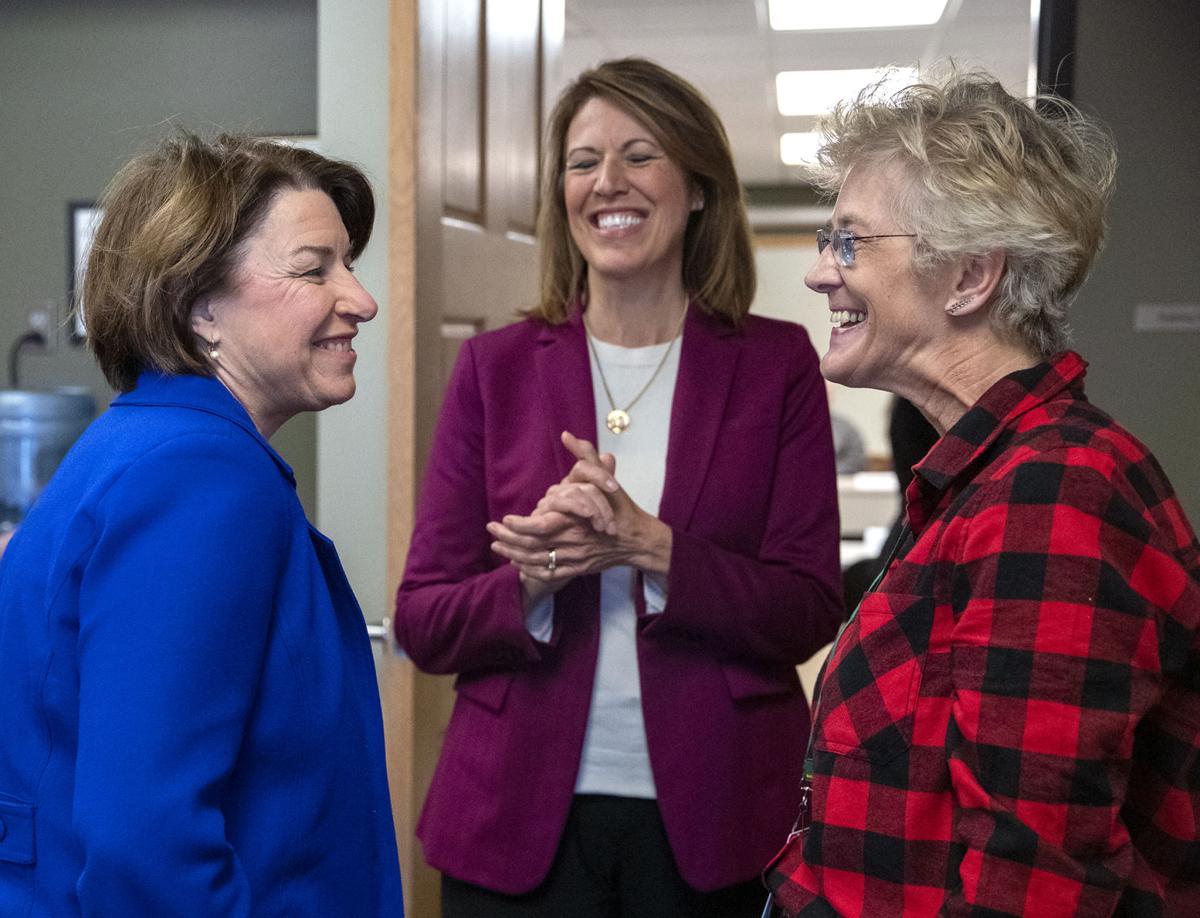 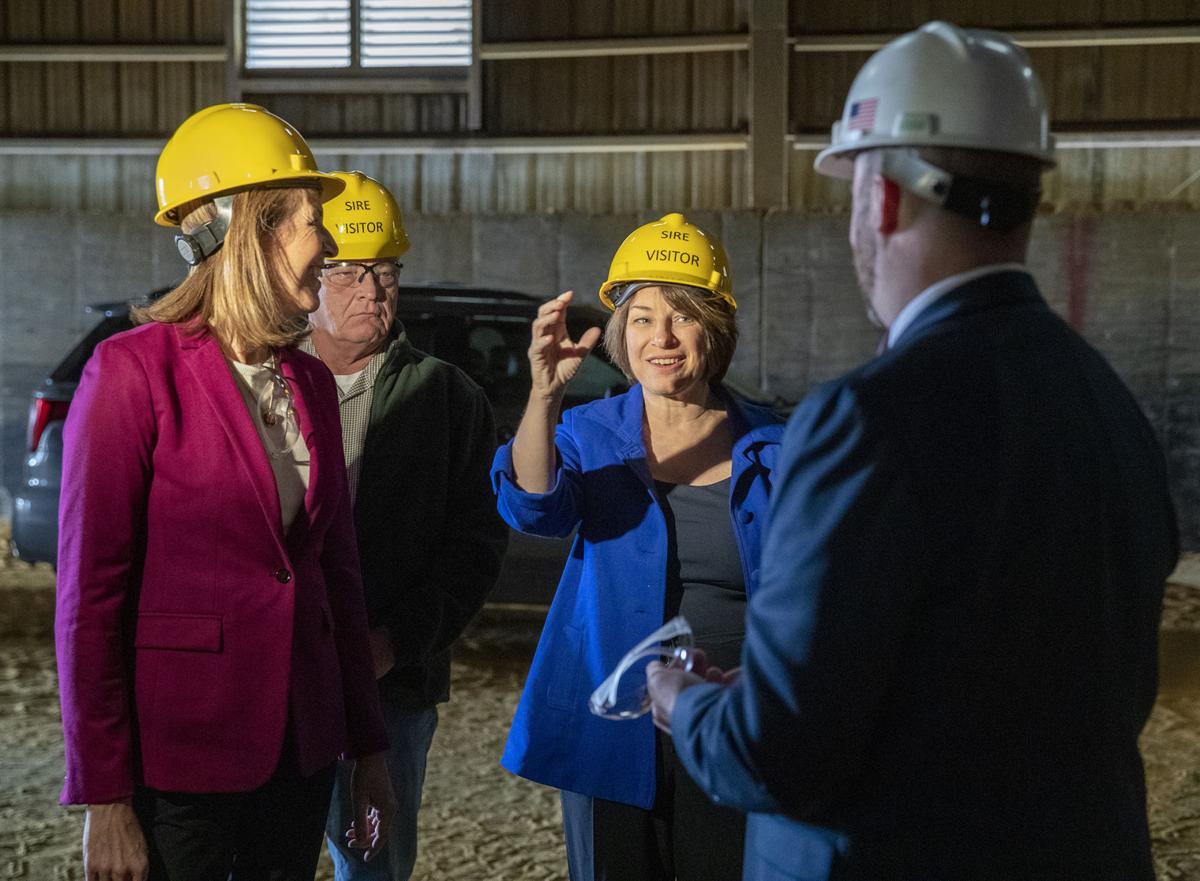 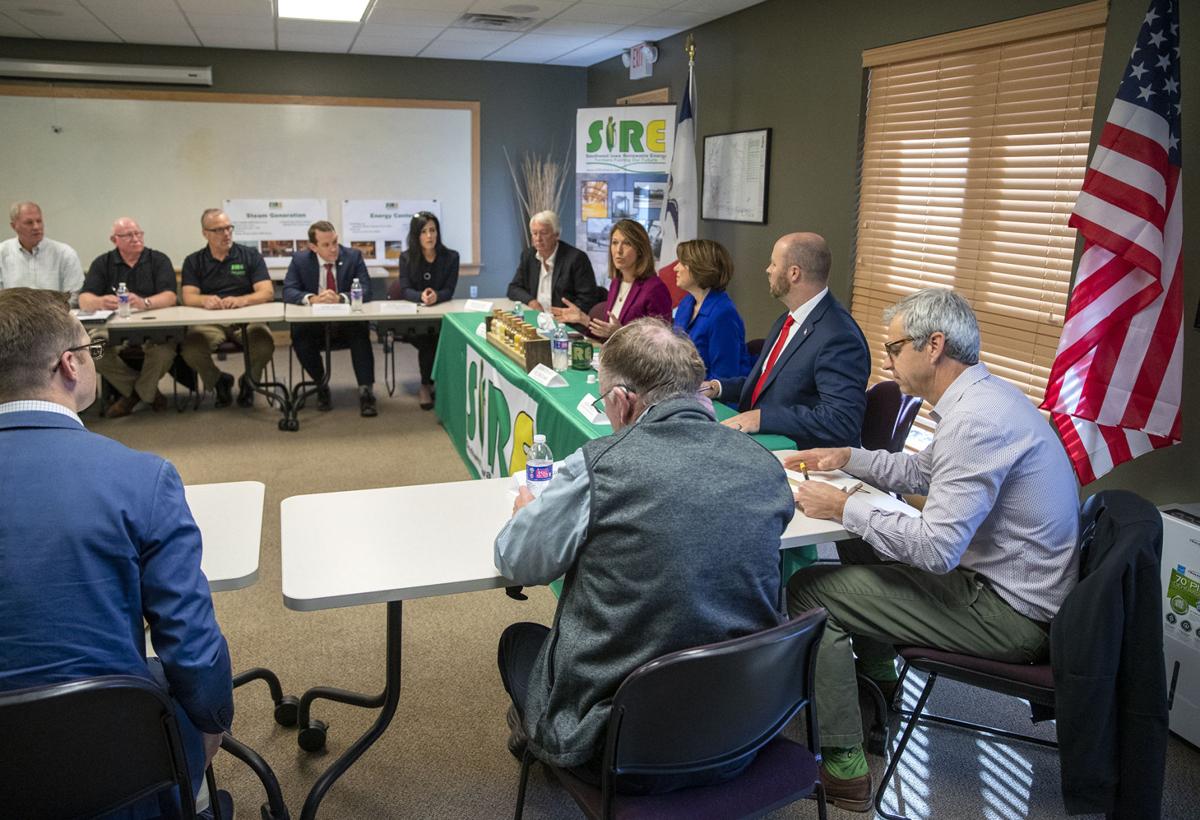 Both assured attendees they would continue to advocate for the agriculture industry.

“We’re going to be out there fighting every day,” said Axne, a member of the House Agriculture Committee.

Excessive small refinery exemptions, a weak Renewable Fuel Standard, delays in extending the biofuel tax credit – and, for some southwest Iowa farmers, flooding – have combined to put the squeeze on farmers and the biofuels industry.

Axne has called for a federal investigation into the Environmental Protection Agency’s biofuel waiver process – specifically, what she says is the misuse of the EPA’s small refinery exemption, which has been granted to some large companies.

As a result, the demand for ethanol and corn have decreased and prices have fallen. Less blending of ethanol in fuel has added to more greenhouse gas emissions, since ethanol burns more cleanly, she said.

The small refinery exemption has been used in a way not intended by Congress, Klobuchar said.

“The whole process was designed for a handful of waivers, and I found out there have been dozens and dozens of them – and some have gone to big companies, including ones like Exxon,” she said.

“It was a gut punch to our industry,” said Justin Schultz, coordinator of the SIRE plant.

Said Klobuchar, “The 31 SREs alone negated the E-15 benefit for this year.” She was referring to the Trump Administration’s approval of the year-round sale of gasoline that is 15% ethanol.

“We’ve lost roughly 2 billion bushels of market for these biofuels,” said Carl Jardon, vice president of the the Iowa Corn Growers Association Board and a Fremont County farmer. “That equates to about 50 cents a bushel in price.”

Soybeans are also down because of reduced demand, said Michael Dolch, public affairs director for the Iowa Soybean Association. One reason is uncertainty about renewal of the tax credit.

“We’ve had farmers on the brink, and we’ve had biodiesel plants close,” he said.

“If waivers keep coming and ethanol plants keep shutting down and laying off, those are small towns that are dying,” said Daniel Heady of the Iowa Farm Bureau.

Green Plains has sold $75 million in assets, closed an ethanol plant in Virginia and laid off more than 100 employees, said Michelle Mapes, an executive with Green Plains, a commodity-processing business based in Omaha that produces ethanol.

“We’re doing what’s necessary to restructure and move forward in a very different environment,” she said.

Klobuchar has teamed up with Chuck Grassley and other farm-state senators to advocate for a strong renewable fuel standard, which is set by the EPA and mandates how much ethanol is to be blended with gasoline each year.

“The farm economy is the backbone of this country,” she said. “And I’m talking about food, but I’m also talking about energy. I’ve always said we want to invest in farmers in the Midwest and not oil cartels in the Mideast.”

“It actually takes away from our national security not to produce our own energy,” Axne said.

Once plants close, there’s less demand for corn, corn prices decline further and risk increases for banks that provide operating loans to farmers, said Brett Frevert, chief financial officer at SIRE. That, in turn, can lead to more foreclosures. That has a “ripple effect” on communities and the farm economy, he said. Addressing the problems next year will be too late for some farmers and agribusinesses.

The EPA only sees part of the picture, Schultz said.

“They see what’s on the paper, but they don’t see the people,” he said.

“I think that human focus has to be there,” Klobuchar said. “There are people of all kinds of biofuels who are on our side. Hawaii is on our side.”

“I’m worried not only about our farmers, but I’m worried about our climate with all the fossil fuels,” said Alice Hodde, who farms with her husband, Lyle, in Fremont County.

Lyle Hodde suggested agriculture interests should team up with conservationists and market ethanol more aggressively as a clean fuel.

“What I would like to see is every vehicle being a flex-fuel vehicle,” he said.

One concern is the tax credit blenders get for blending ethanol into gasoline. Axne said she has talked to House Speaker Nancy Pelosi about extending the credits and believes the House will extend them. She said ethanol should also be looked at as an export opportunity.

Schultz said SIRE is exploring the possible use of higher blends of ethanol, such as E-30.

“A lot of their equipment is not covered for flooding,” he said. “They lost a lot of tractors and combines and grain bins.”

Hodde said they lost their home in the flood of 2011 and moved into the town of Sidney. They lost 620 acres of farmland in Missouri that year.

“We were right in front of the levee that broke,” he said. “Now, it got our Iowa side.”

Karol King, chairman of the SIRE Board, farms on bottomland in southwest Iowa and was also affected this year.

“We only got one-third of (their cropland) planted this year,” he said. “We did go ahead and plant oats on the marginal land this year, and we’re hoping to harvest hay off of it – but right now, it’s got water standing on it.”

Axne encouraged everyone to forward her their stories about the effects of SREs and tariffs, as well as low prices and flooding, to help her personalize the ag downturn when talking to policymakers in Washington.