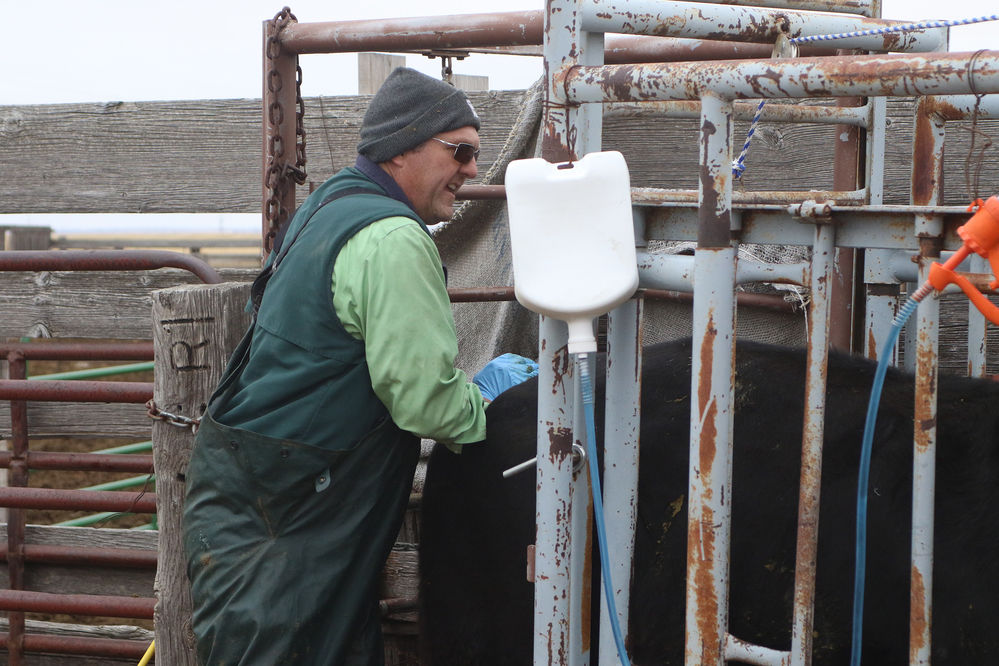 Veterinarian Travis Van Anne encourages a cow to move forward into the chute so he can preg check her on Wednesday. Preg checking can help producers make money-saving decisions about their herd. 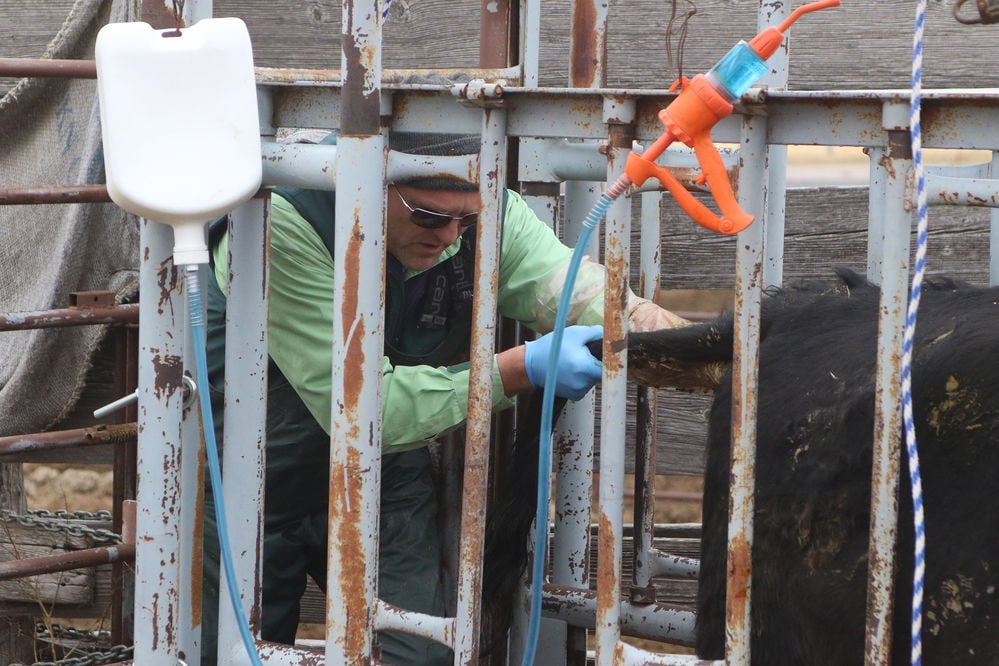 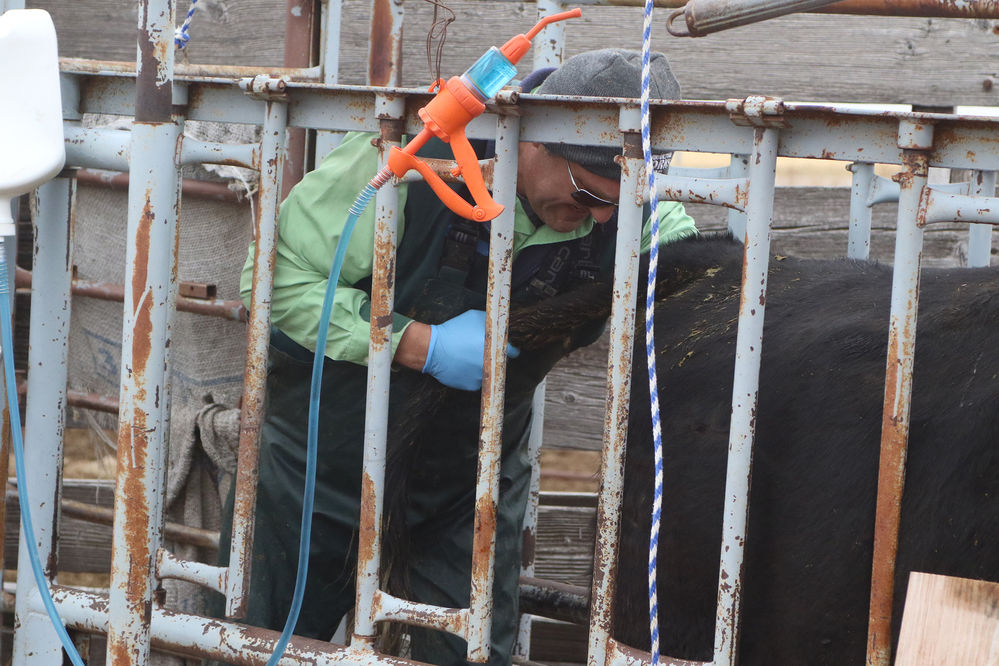 Veterinarian Travis Van Anne encourages a cow to move forward into the chute so he can preg check her on Wednesday. Preg checking can help producers make money-saving decisions about their herd.

Travis Van Anne knows cattle. As a veterinarian, he spends his days helping others keep their cattle healthy. As a producer, his free time is dedicated to keeping his own herd in tip-top shape.

“Preg checking is a good idea,” Van Anne said on Tuesday as a cow moved into the chute next to him.

He explained that knowing which cows are open and which are bred allows producers to make decisions about their herd that may help them financially.

“It costs about $1000 to keep a cow for a year,” Van Anne said. “If she isn’t bred, you’re putting that money into her and not getting anything back.”

As Van Anne spoke, he continued to check one cow after another, using the rectal palpation method. Each time, he would attempt to either feel the calf’s head or the cotyledons, which are soft, button-like nodules on the fetal membrane that attach to the uterine lining during development.

“If I can grab their heads, then I can be really accurate with how far along they are,” Van Anne said. “These cows will be calving sometime between February 15 and March 15 — at least, that’s what my hand has said so far.”

As the temperatures drop, Van Anne has also been helping producers with determining when to wean their calves.

He said weaning can be challenging, because for many operations, the health of newly weaned calves is poor.

“Most calves have some level of illness in the first 30 days on feed and a few even die in the first 45 days at the yard due to Bovine Respiratory Disease,” Van Anne said.

He said the biggest thing producers can do to help ensure cattle stay healthy post-weaning is to wean calves at home before they are sent to the feedlot.

In this method, calves are allowed to see, hear and smell their mothers but are still separated from them.

“Labor is a problem in every area of ag and most folks can’t deal with calves getting out (of the fencing) and being able to feed them every day,” Van Anne said. “But keeping cattle in their home environment eating grass across the fence from their moms is the best method to use for this.”

Ideally, calves would be weaned over the course of about 45 days, but for most producers, this isn’t viable, said Van Anne. The risks to the calf are reduced, but unfortunately, the risks to the ranch increase and returns could decrease.

Van Anne weaned his February/March calves for a week in September and then hard weaned his 801 weight steer calves the day they were taken to the feedlot.

That seven day period can be enough time for calves to learn to eat from a bunk, drink from a waterer, and share bugs with each other through the pathogens in their saliva. Calves can also establish a pecking order and learn that people aren’t predators, Van Anne said.

He said there are a number of factors outside the producers control when it comes to whether weaning is a positive or a negative experience.

First, is the weather. Extreme cold, especially with rain or snow, that is followed by heat stress can be more than many calves can handle, he said.

“Second, are the risks of transportation and commingling,” he said.

He explained that it’s preferable to sell calves close to home, so they have a shorter trailer ride and less water loss.

If calves are mixed with outside calves, they could end up sick due to the transfer of pathogens between the animals. This leads to more calves being treated in their first 30 days on the yard.

The calves genetics can also play a role in determining how the weaning process goes. Calves that are sick or have a poor genetic structure may have a reduced ability to eat and gain weight.

“My calves typically eat three percent of their body weight in this critical time frame,” Van Anne said. “Calves that eat also drink and furthermore, don’t get sick as often.”

When calves are weaned prior to arriving at the feedlot, the chance of them being treated with antibiotics when they get there is dramatically less, he said.

Mass treatment, or giving all of the calves an antibiotic on arrival, is generally discouraged and gives the industry a bad name, Van Anne said.

“Management prior to feedlot arrival if changed even slightly, such as weaning the calves for as little as a week at the ranch, can create a better environment for the calves at the feedlot and eliminate the need for mass treatment,” he said.