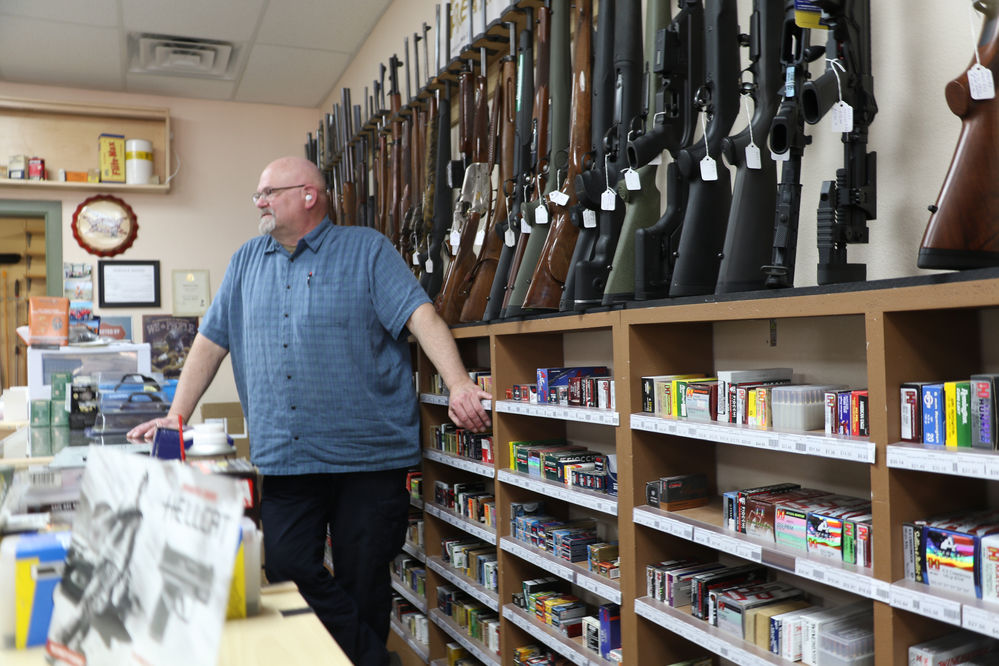 John Erickson stands behind the counter and speaks to a customer at his Bridgeport business, Flatwater Arms. 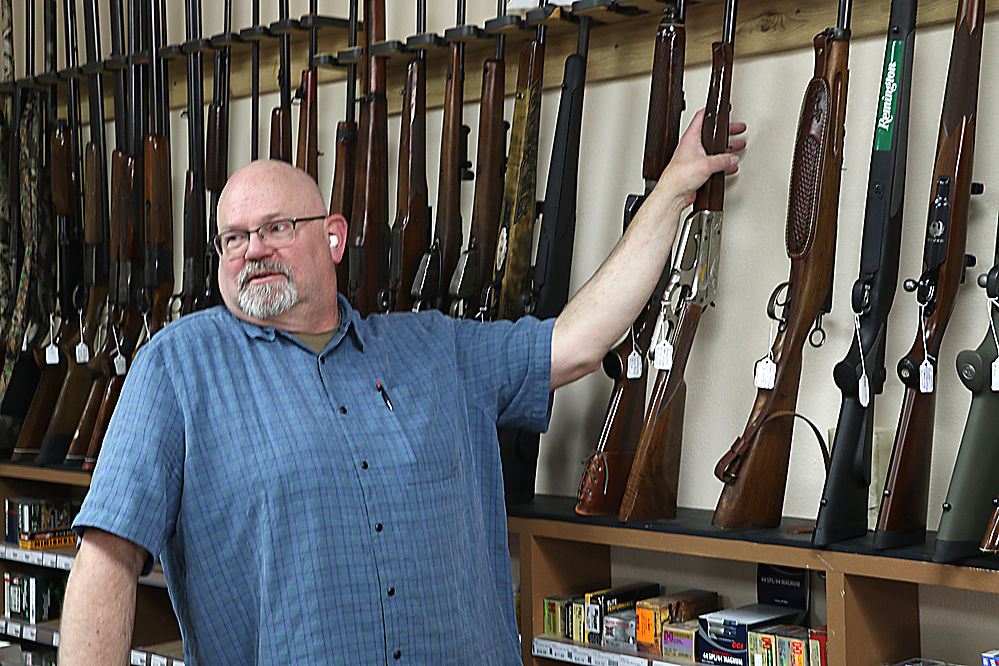 John Erickson stands behind the counter and reaches for a gun to display to a customer at his Bridgeport business, Flatwater Arms.

John Erickson stands behind the counter and speaks to a customer at his Bridgeport business, Flatwater Arms.

John Erickson stands behind the counter and reaches for a gun to display to a customer at his Bridgeport business, Flatwater Arms.

At first glance, John Erickson seems as if any other pleasant small town business owner would, possessing a cheery, outgoing and expressive personality. He loves the community of his hometown, Bridgeport.

He graduated from graduate from Bridgeport High School in 1978 and he began his military career soon after graduation. He proceeded to spend his first few years in the military, receiving an education from the Navy Nuclear Power School.

“The technical schooling itself was about two years, including the engineering lab tech school, practical training . . . then I reported to a submarine in Charleston,” he said.

After a few active years in the Navy, he said he made the decision to continue his education after being a recipient of a Navy ROTC scholarship, through which he received a bachelors of science degree from Pennsylvania State University.

Erickson is not just a businessman, or even a decorated military man. Over the course of his 33 years of service, he began to venture into a variety of careers, ranging from his work as a sales consultant, railroad conductor, a nuclear plant health physics technician, state health program manager, epidemiology/bioterrorism coordinator, senior policy adviser to the Nebraska Governor’s office of policy research and finally, current owner of Flatwater Arms and Bridgeport’s weekly newspaper, The News-Blade.

Erickson’s resume is filled with a long list of military positions, ranging from his years of work on the USS Sierra in 1989, after completing Surface Warfare School and Communications Officer School.

His 11 years of active duty commanding officer positions, years of work with FEMA, deployments to Iraq in 2008 as a Civil Affairs officer and the position of Deputy of Operations during his last deployment to Djibouti, Africa in 2011, is just a short summary of Erickson’s successful military career.

His’s experience while on deployment brought him a long list of unique encounters, most strikingly his most recent work in Djibouti, Africa while on his final deployment in 2011.

“Planned and executed 300 counter-terrorism, civil affairs, humanitarian mine action and civil engineering missions in 13 countries; Led watch team during numerous contingency and crisis response actions to include medical and casualty evacuation of United States and coalition personnel, transfer of suspected pirates, and the critical recovery of a U-28 aircraft” Erickson said.

Before his last deployment, he spent nine years as a senior policy adviser to former Nebraska governors, Gov. Mike Johanns and Gov. Dave Heineman. While working as a policy adviser, he specialized in public health and agriculture issues, as he assisted with the creation of the 2004 United States Farm Bill.

His career experience within agriculture policy and governmental communications brought him to a civil affairs officer role of the Multi-National Corps in Iraq during his 2008 deployment, he said, where he earned a Bronze Star award for coordinating efforts in governance and agriculture.

“I was in the governance section, trying to help the (United States) military understand and interface with the Iraqi government . . .I was trying to bring reality into the discussion so they (the Iraqi government) could revise their expectations and be better leaders,” Erickson said.

He spent his time during his 2008 deployment aiding in the development of Iraqi agriculture and civil affair policy.

To accompany his work with the military and state government policy, Erickson assisted in the establishment of health safety plans, he said, which included bringing together emergency response members, law enforcement and medical professionals to form the first emergency preparedness task force in the state of Nebraska.

His experience of putting together state emergency measures, along with his multinational governance roles, he became a part of FEMA. While he spent his time working with FEMA, he assisted in the response to Hurricane Katrina as a region seven Navy Emergency preparedness liaison officer.

“Well, we got this hurricane coming toward New Orleans (Hurricane Katrina) ... they could tell it was gonna hit New Orleans. ... So I got the phone call, asking how quickly I could get down there. I said, 'I could leave tomorrow, just give me orders." I went down there and I was there for three or four weeks,”  he said.

Erickson’s extensive list of career experience continues on, and once he made the decision to retire from the United States Navy, he had officially settled down in Bridgeport, the small town he calls home.

Erickson said he now focuses on owning and operating his two businesses, Flatwater Arms and the Bridgeport News-Blade.

His first business venture as an owner of the Bridgeport News-Blade, led him to his second business, Flatwater Arms.

“All because I couldn’t find ammo” Erickson said.

He said he stumbled upon the idea of opening a gun and ammo retail shop, after he started his work as an owner of the Bridgeport News-Blade.

A number of years in the past, he said, ammo was a difficult thing to find. This lead him to the idea of buying ammo from small retailers and selling it in the back of the News-Blade office, Erickson said while he laughed.

From there he made the decision to officially form his business, Flatwater Arms, which conducts business through their website and business space on Main Street of Bridgeport.

Erickson said he looks forward to the upcoming years, which he hopes to spend more time pursuing his hobbies and other business ideas while residing in Bridgeport with his wife and other family members.