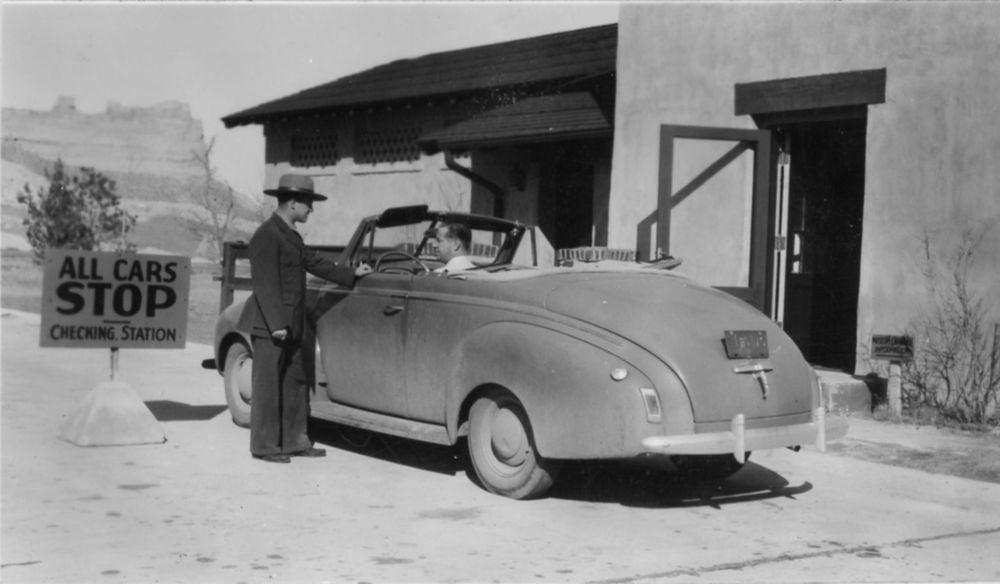 A park ranger talks with a visitor to the Scotts Bluff National Monument in this photo taken in May 1941. 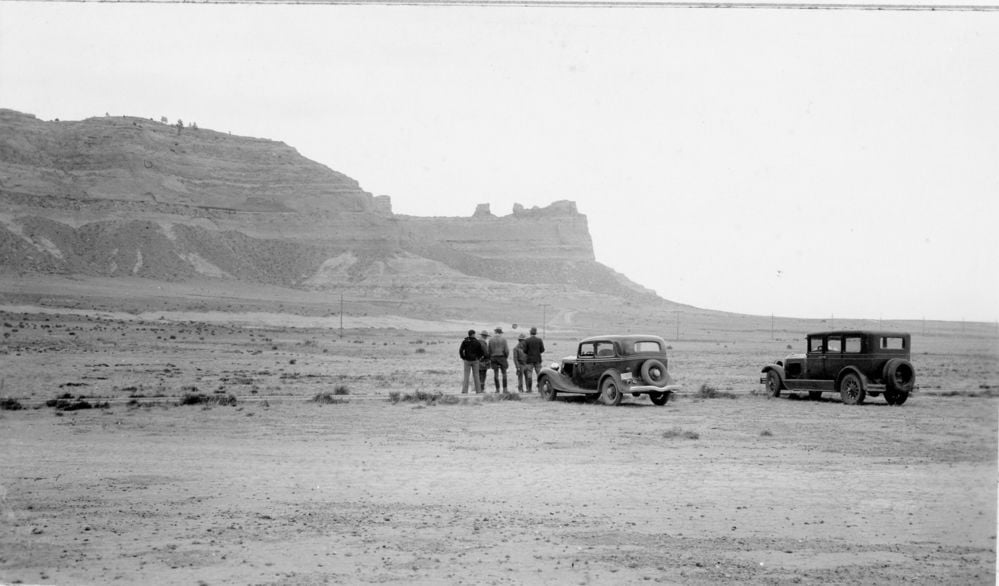 Men look at the monument on Feb. 20, 1935, prior to the construction of the museum and visitors center.

A park ranger talks with a visitor to the Scotts Bluff National Monument in this photo taken in May 1941.

Men look at the monument on Feb. 20, 1935, prior to the construction of the museum and visitors center.

It started with a letter. Of course, making Scotts Bluff Mountain a national monument had been discussed for years by the people of the valley, but it was a letter by G.M. Hitchcock that officially began the process.

The American Antiquities Act of 1906 gave the President of the United States the power to declare historic landmarks, historic and prehistoric structures and other objects of historic significance on land belonging to the government as national monuments.

On March 28, 1914, Hitchcock mailed a letter to the Department of the Interior requesting the designation of Scotts Bluff Mountain as a national monument.

Included in the letter was a statement signed by Scottsbluff’s mayor F.S. McCaffree and city clerk G. L. Shumway, who also requested that the department consider the designation.

If there was a reply, records of it do not exist, according to the National Park Service. Still, the citizens of the valley persisted. They knew the significance of their mountain.

They knew how it had guided pioneers on their journey west, making its way into diaries as wagon trains passed and cementing its role in history as much more than just a formation looming over the valley.

For those who settled here and the generations who came after them, the bluff was an integral part of their lives visible from nearly everywhere they went.

They were not going to give up.

The second letter arrived at the Department of the Interior in early 1916. This time, congressman Moses P. Kinkaid was requesting information from the Assistant to the Secretary of the Interior, Stephen T. Mather, about how Scotts Bluff could be made a national monument or a national park.

Around that time, another letter arrived at Mather’s office. The editor of the Scottsbluff Daily Star-Herald, H. J. Wisner, was requesting the same information.

The men received replies but department officials seemed indifferent. In many cases, a reply like that would probably lead to a reduction in effort — it seemed as it just wasn’t going to happen — but this isn’t most cases.

A petition dated Oct. 5, 1916, was signed by Nebraska’s senators and representatives in Washington and sent to the Secretary of the Interior Franklin K. Lane. It yielded no results.

In March 1918, another petition came across Mather’s desk, although this time it was addressed to him as the director of the National Parks Service.

“It is historic and the most rugged mountain in the state,” the petition said.

They wrote about the hundreds of people who’d climb the bluff every summer and expressed their desire that somewhere within the monument, there would be a place for “the public to spend a pleasant day.”

The editors of the Scottsbluff Daily Star-Herald, Gering Courier and Gering Midwest ran pieces giving credit to the petition and building more interest among locals — and federal officials.

A BUMP OF LAND

The National Parks Publicity Chief, Robert L. Yard, told the assistant director Horace Albright that he didn’t think Scotts Bluff was important enough for the designation. At one point, Yard sent Mather a memorandum stating that he was against the establishment of the monument, according to NPS.

Although Yard eventually changed positions and became an avid supporter of the monument, his initial hesitation was shared among other staff members.

In Oct. 1919, another memorandum circulated, this time from J.J. Cotter, an administrative assistant.

“I don’t know what has led you to thinking that Scotts Bluff should be a National Monument. It seems to me to be but a bump of land,” Cotter wrote. He continued, “Have you given it your personal attention? If you have, won’t you let the Secretary have a memorandum as to just why you think it should be withdrawn.”

In a response, Mather seemed a irritated with Cotter.

“Yes, I have personally considered this matter. It is true Scott’s Bluff (sic) is only a bump of land, but it is some bump,” Mather wrote.

He said that the “bumps” historical associations and the fact that it could be developed as a spot for tourists, it was attractive for national monument purposes.

Like the people of the Valley, Mather could see that the Bluff was more than just a small mountain in middle of the rural America — it was history and it should be preserved.

In December 1919, a proclamation had been drawn up and set before President Woodrow Wilson. Since this proclamation had the support of the director and the department, the president didn’t hesitate to sign it, according to the NPS.

At the time, the parks service was financially limited and couldn’t establish positions for regular employees, instead opting to look for responsible, interested citizens who could keep an eye on things, according to the NPS.

The first person to watch over the monument in an official capacity was the editor of the Gering Midwest, Willie Major Maupin.

In a few days, it will be 100 years since the proclamation was signed and more than 105 since that first letter from Hitchcock in 1914, and the monument has seen a lot of changes.

In 1933, construction began on the summit road which would allow cars to traverse the landmark that was once traveled by pioneers.

In 1935, the original visitor center was built at its base. It was expanded in 1937 to include the tower, Landmark Room and restrooms. In 1948, the William H. Jackson Memorial Wing was added.

Currently, the visitors center is under construction again to make room for the more than 100,000 tourists and locals that visit the monument annually.

The project is on track to be completed in April, with a tentative grand re-opening set for April 25.

“One of the most dramatic effects which may be viewed and experience in the park is that of erosion,” wrote Lucas.

During the creation of the summit road and hiking trails, a marker was placed in a capstone on top of the bluff. Now, more than a foot of it is visible to visitors.

It’s safe to assume that the wind will continue to blow over the next century, chipping away at the beloved landmark, but it likely won’t face destruction from man.

Instead, it will continue to interrupt the flat horizon solely because for the people of the valley knew that it was more than a bump — it was a monument.

The Scotts Bluff National Monument will be part of yet another moment in history — and there will be cake.