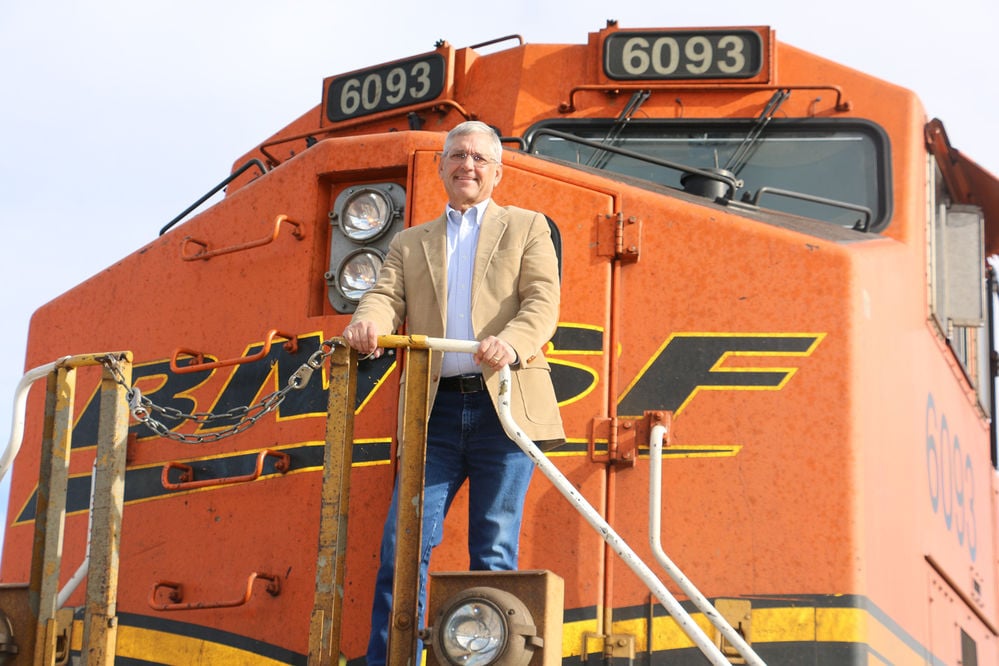 Alliance Mayor Mike Dafney spent 41 years as an engineer for Burlington Northern before retiring in 2011. He is serving as mayor for the second time. 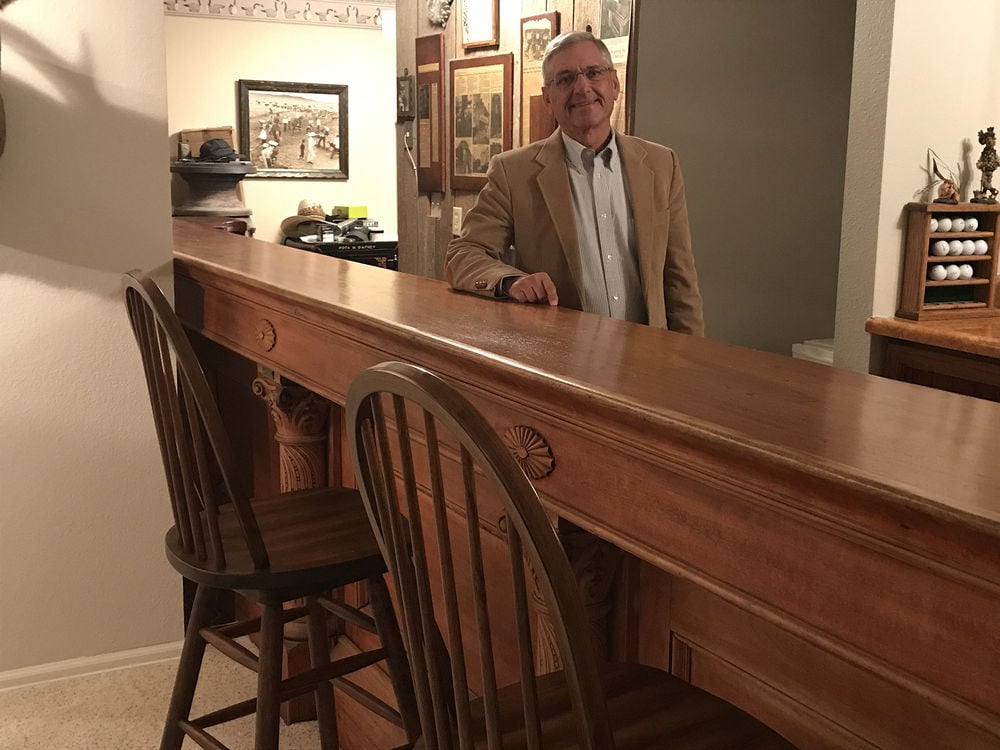 An 18-foot solid top highlights a bar in the home of Alliance Mayor Mike Dafney. Dafney’s grandfather owned the oldest bar in Hartville, Wyoming, and Dafney obtained the original bar from the establishment. 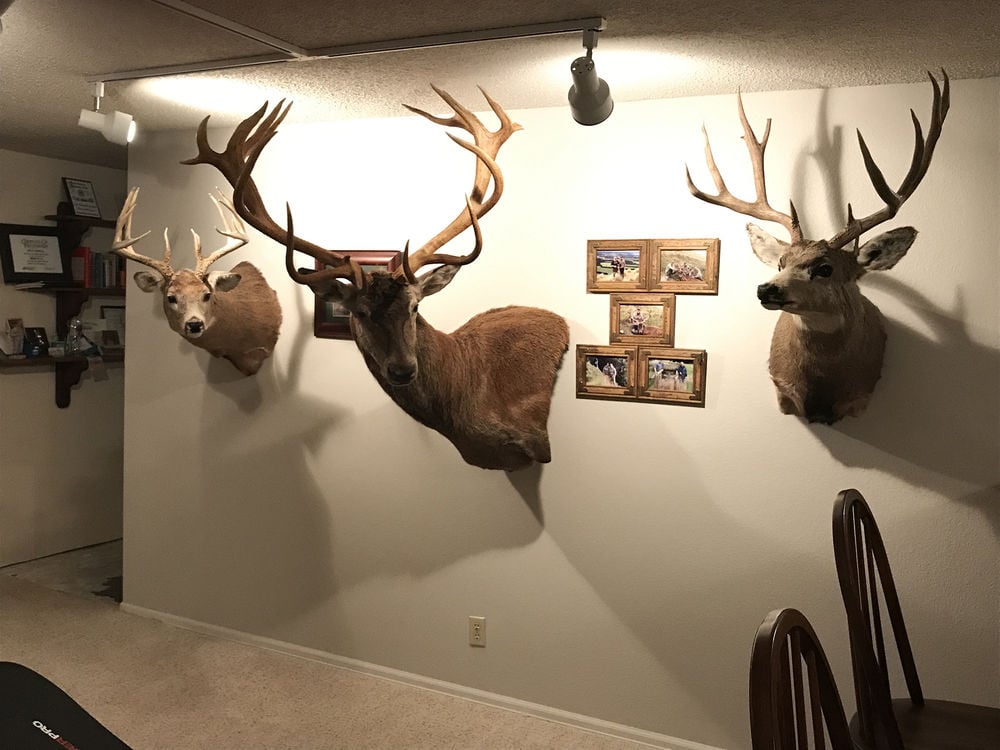 Some of the hunting trophies of Alliance Mayor Mike Dafney.

Alliance Mayor Mike Dafney spent 41 years as an engineer for Burlington Northern before retiring in 2011. He is serving as mayor for the second time.

An 18-foot solid top highlights a bar in the home of Alliance Mayor Mike Dafney. Dafney’s grandfather owned the oldest bar in Hartville, Wyoming, and Dafney obtained the original bar from the establishment.

“I like to tell people I’m like an old tree, my roots are pretty deep here,” Alliance Mayor Mike Dafney says.

Mike and Helen (Percival) Dafney, his wife of 48 years, were both born and raised in Alliance and graduated in 1969. After a year of college at Chadron State, Mike Dafney returned to Alliance and found that the railroad was hiring. He signed on with what would become the Burlington Northern/Santa Fe Railroad and spent the next 41 years as a locomotive engineer before retiring in 2011.

In 2018, he began his second go-round on the Alliance City Council, having served 18 years previously from 1988-2006 before choosing not to run again. He was mayor for 10 of those years, learning from mentors such as former mayors Don Overman of Scottsbluff and Bob Unzicker of Gering. In 2018, a push from community members led Dafney to run again.

By the end of his current term, Dafney will have spent nearly a quarter of a century on the council, at least 12 as mayor, and will be 71, so he says this will be his last term.

Dafney said he very much appreciates the assistance he has had from City Clerk Linda Jines, who has 41 years of experience as “one of the most knowledgeable and respected city clerks in the state.” He was also influenced by his first City Manager Lyle Lacy.

Dafney has served on numerous state and national boards and committees, including his current position on the National League of Cities’ Transportation and Infrastructure Committee.

At BNSF, Dafney was a member of the Precision Execution Team and was a candidate for the Presidential Award for the Alliance division in 1994.

When Dafney hired on with BNSF, it was an exciting job as coal traffic had just begun to hit big. He said rolling down the track with 118 cars and several tons of coal behind you “makes you feel like you’re really doing something.

Nick and Leila (Hawley) Dafney raised Mike around their businesses, a Packard dealership and a building that was home to Sears downtown, and a Phillips 66 station and a mobile home park on the east side of town. Nick Dafney’s father had emigrated from Greece to the iron-ore mines near Hartville, Wyoming. He also purchased the oldest bar in the state, Miner’s and Stockman’s Steakhouse and Spirits and brought a piece of that bar with him, a piece that now rests in Mike Dafney’s basement.

“(Grandpa) got money enough that he bought out a general store in Antioch, and he had a general store and gas pumps that served the ranchers in the area,” Dafney said. “Grandpa owned (Miner’s and Stockman’s and when he moved to Antioch, he brought the front bar with him. It’s 18-foot long, all mahogany and cherry wood. It had a back bar that’s 10-foot tall and they just couldn’t move it, so it’s still in Hartville.”

The Dafneys raised their three children, Nick, Adrianne and Dana in Alliance. All three attended the University of Nebraska and have found jobs outside of Alliance, so opportunities to see their eight grandchildren are valued by the Dafneys.

“I envy those of my friends that have kids here and they get to see them every day,” Dafney said. Not getting an education was not an option for the kids, and their schooling and subsequent job opportunities took them in different directions.

Growing up in Alliance, Dafney said was a simple life.

“I think it was like any rural town. It was real easy,” he said. “At night, our parents didn’t worry about us. No cell phones or tablets, so we were outside enjoying the environment. ... The City Hall had an auditorium in it where there were teen dances on Friday. One of the joys of that, the dance got over at midnight and we walked across the street and in the back door of the bakery and got the doughnut holes. ... Our parents didn’t worry about us. Same for me, if my kids were out and about, I didn’t have to go but one mile in either direction to find them.”

With a long past in the community, Dafney will continue to do what he sees as best for the future of Alliance.

“Two things, what’s common sense and what’s the right thing to do, they go hand in hand,” he said. “When it comes to the taxpayers, I’m real conscious of what I do to them. I tell people that $300-400 push mower to the taxpayer, it’s the same as the $50,000 greens mower because they’re the ones paying for it. When it comes to businesses, I’m one of those that says let’s not put obstacles up to keep them from being successful. If there’s an obstacle or hurdle there, let’s take it down and help them go.”

SPOTLIGHT ON LINGLE: Community working to maintain in changing times