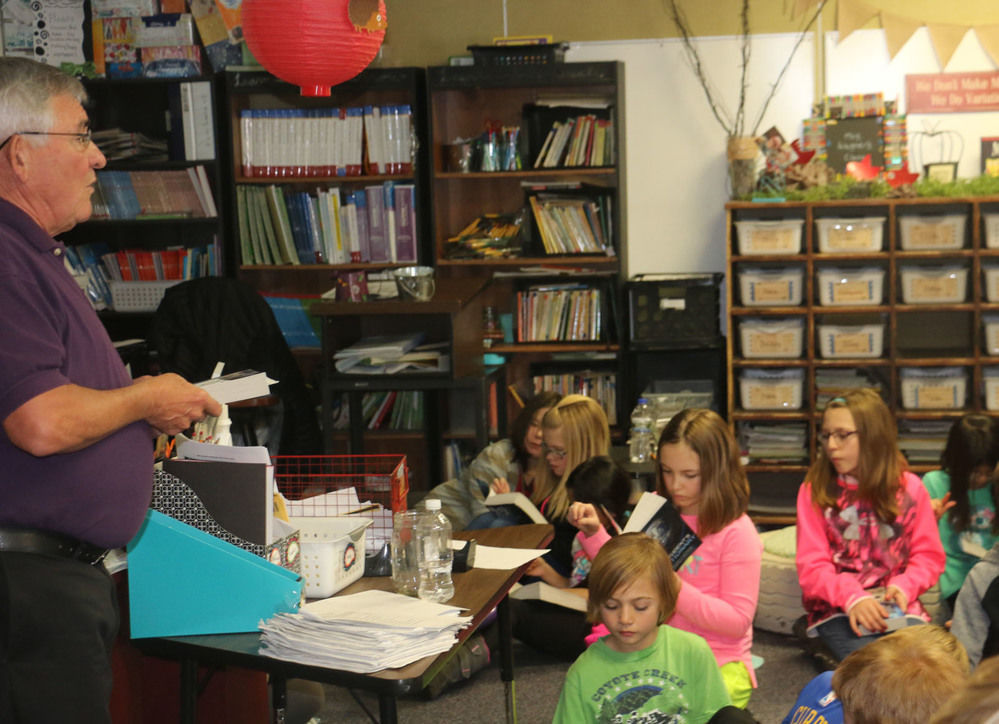 In January 2017, George Schlothauer, Scottsbluff/Gering Rotary Club member, talks to fourth graders about what the Rotary Club does before passing out dictionaries. 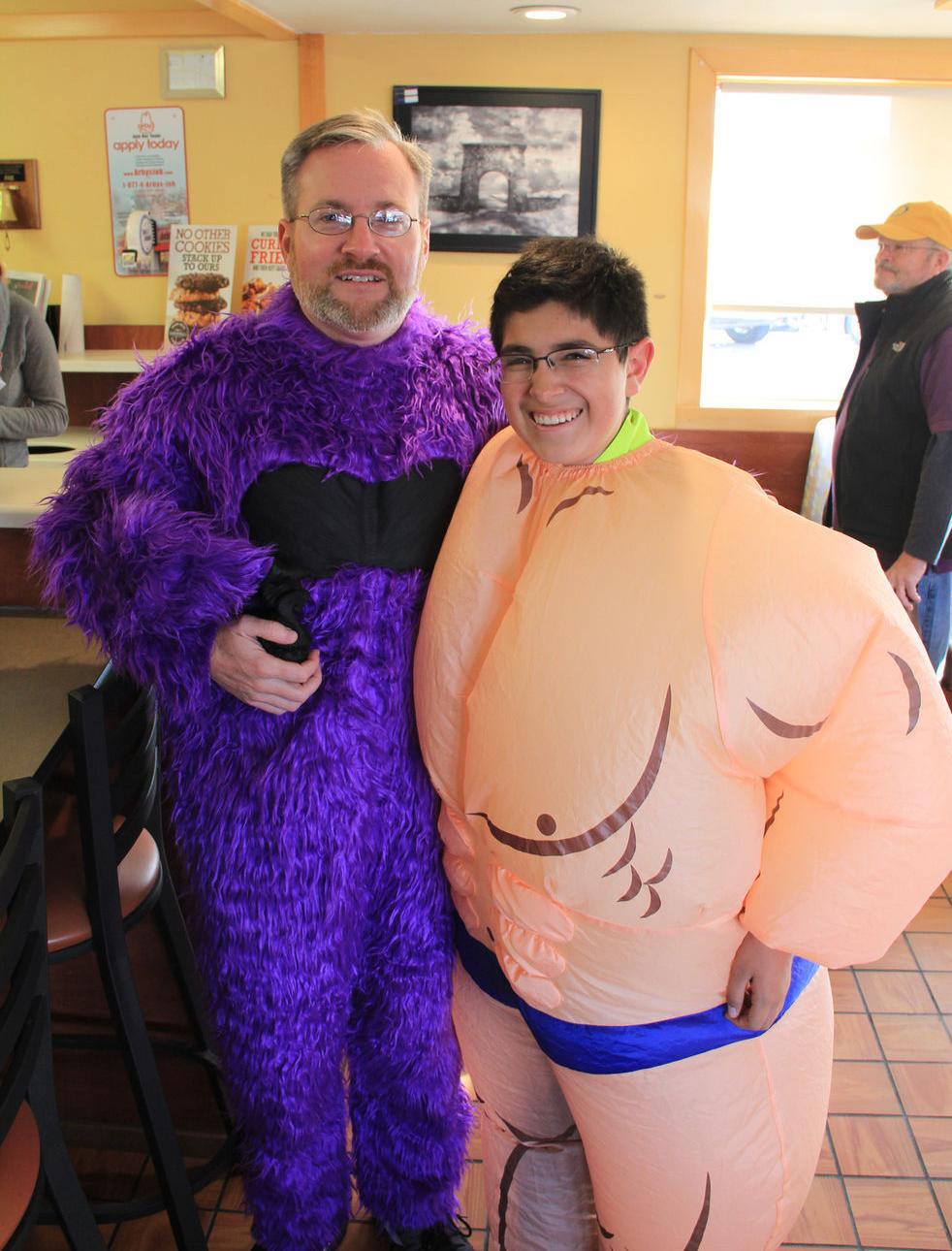 In November 2016, Zac and Mark Karpf got dressed up for the occasion and stood out by 27th Street, flagging down passers by to entice them with purple pancakes for a good cause. 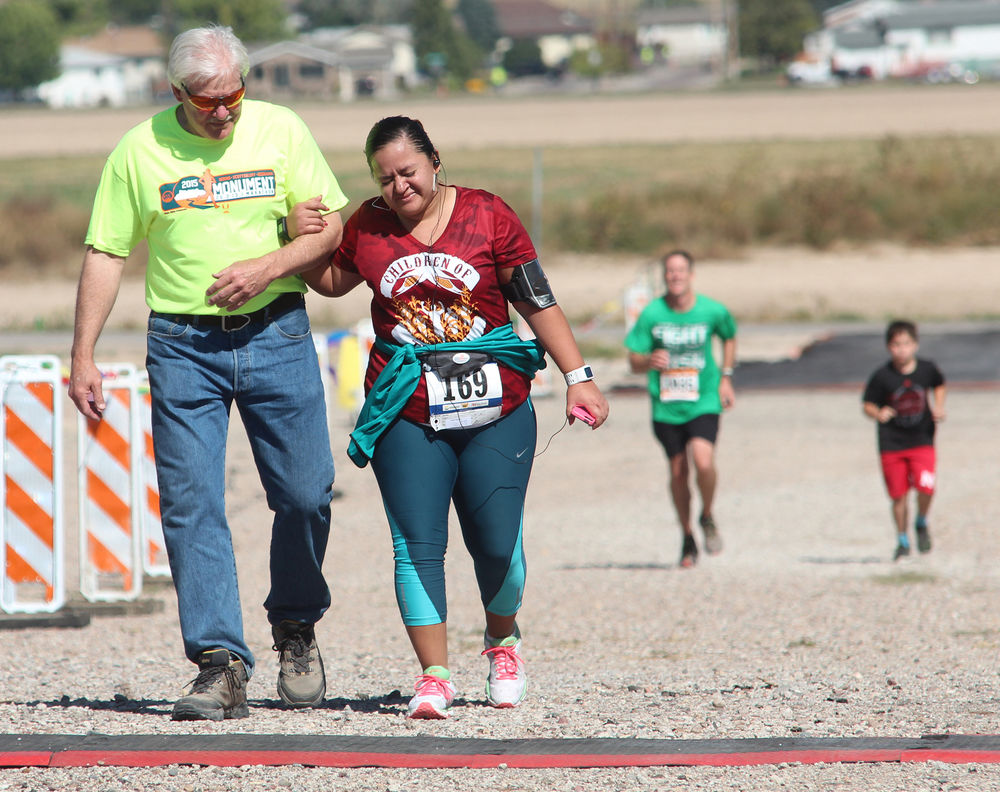 Rotarian Hod Kosman helps a runner make it across the finishline at a recent Monument Marathon. The Rotarians help out at the marathon each year. 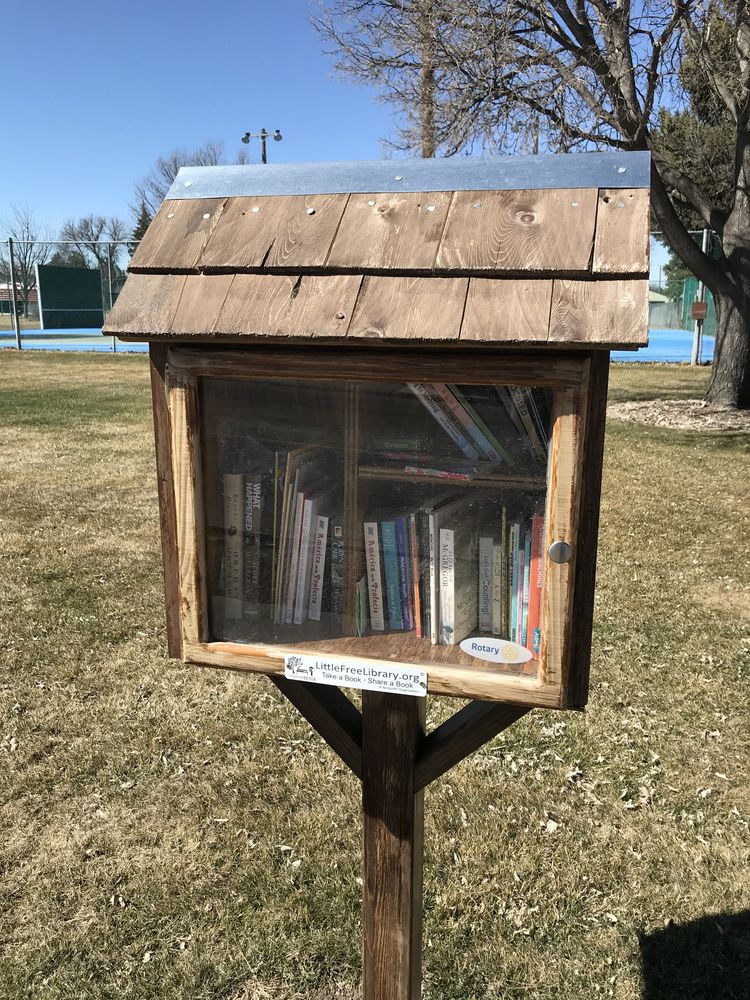 The Scottsbluff-Gering Rotary club established Little Free Libraries such as this one at Westmoor Park in Scottsbluff. The libraries are free to use and are at multiple locations in Scottsbluff and Gering.

In January 2017, George Schlothauer, Scottsbluff/Gering Rotary Club member, talks to fourth graders about what the Rotary Club does before passing out dictionaries.

In November 2016, Zac and Mark Karpf got dressed up for the occasion and stood out by 27th Street, flagging down passers by to entice them with purple pancakes for a good cause.

Rotarian Hod Kosman helps a runner make it across the finishline at a recent Monument Marathon. The Rotarians help out at the marathon each year.

The Scottsbluff-Gering Rotary Club reached its 100-year anniversary Tuesday, forging a legacy of giving, both locally and internationally.

Rotary Foundation donations from the Scottsbluff-Gering club and all others like it around the globe go to help fund local, regional and national projects. One of the main goals for Rotary International for the past 30 years has been to eradicate polio throughout the world, and the organization has contributed more than $1.8 billion to the cause and helped immunize more than 2.5 billion children in 122 countries. Polio remains endemic in only Afghanistan, Nigeria and Pakistan, but there is still work to be done.

“We’ve done a lot of special fundraisers just for (the polio program) because there’s been a real push,” Scottsbluff-Gering Rotarian Zac Karpf said. “Once you can eradicate a disease like polio, then all of the money that is going towards doing that can be focused on something else, so there’s really this last push to get that out. There’s also some other health issues our club is passionate about.”

Rotarian Joe Schonn has worked on a project to bring clean water to Kenya to improve hygiene for school children in the country. Closer to home, the Scottsbluff-Gering club has helped with regional projects to bring parks to communities in Wyoming and Colorado. A tree planting project was completed in Scottsbluff and Gering a couple of years ago.

“Being involved in Rotary and the Rotary Foundation gives you that engagement at all different levels, locally, regionally and globally so you really do feel like you’re contributing to something that makes a difference,” Karpf said.

“I think these projects give opportunities to people who may not have books to have them,” project coordinator Megan Hayward said. “It gives them stories to read. It gives them information. I think it allows individuals to connect to the community a little bit better.”

As the Scottsbluff-Gering Rotary Club celebrates 100 years, President Mike Downey said there is much more the club can and will do to make it viable for the next 100 years — whether it be fundraising, planting trees, organizing parking at the Old West Balloon Fest or helping out with the Monument Marathon.

“Rotary meets a lot of generations,” Downey said. “They meet the youth and young business people and the older business person and the retired person. They can all do something in Rotary. You have people that have been active for 50 years plus. And you have people that are brand new, like Megan Hayward is a pretty new member, but she got right in there and started her project. ... If the club wasn’t doing things that are real and make a difference, people wouldn’t be staying in the club.”

For Bob Kelley, a Rotarian for 46 years, the appeal hasn’t gone away.

“I joined Rotary in 1974, and I could certainly ride off into the sunset, but I thoroughly enjoy going to the weekly meetings, the fellowship, and you find out what’s going on in the community and stay connected and be involved,” he said. “It’s great. I enjoy it very much.”