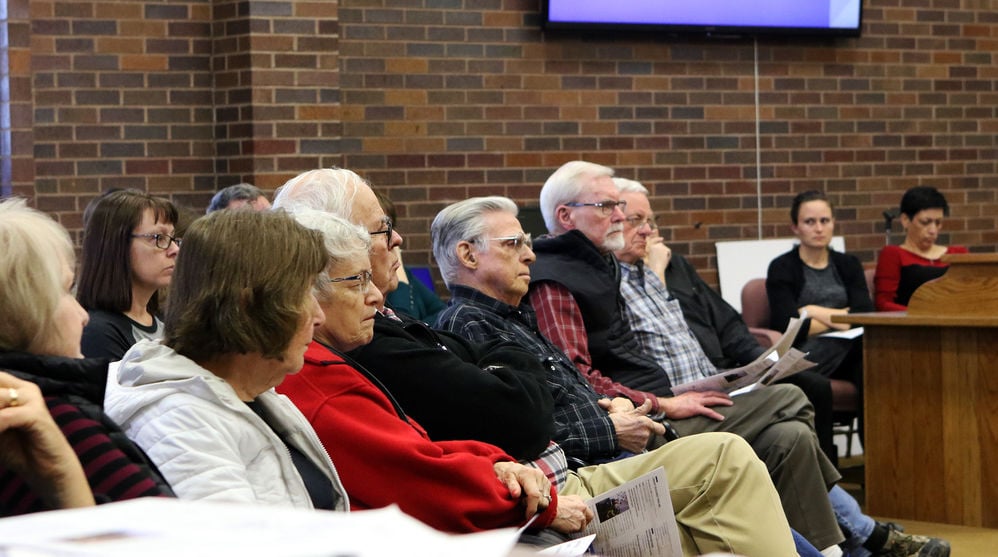 A crowd listens to remarks from Bill Peters, vice chair of the Gering Public Library Foundation, during the organizations annual meeting at City Hall on Tuesday. The community was encouraged to attend the meeting to share their thoughts, ideas and concerns about building a new library. 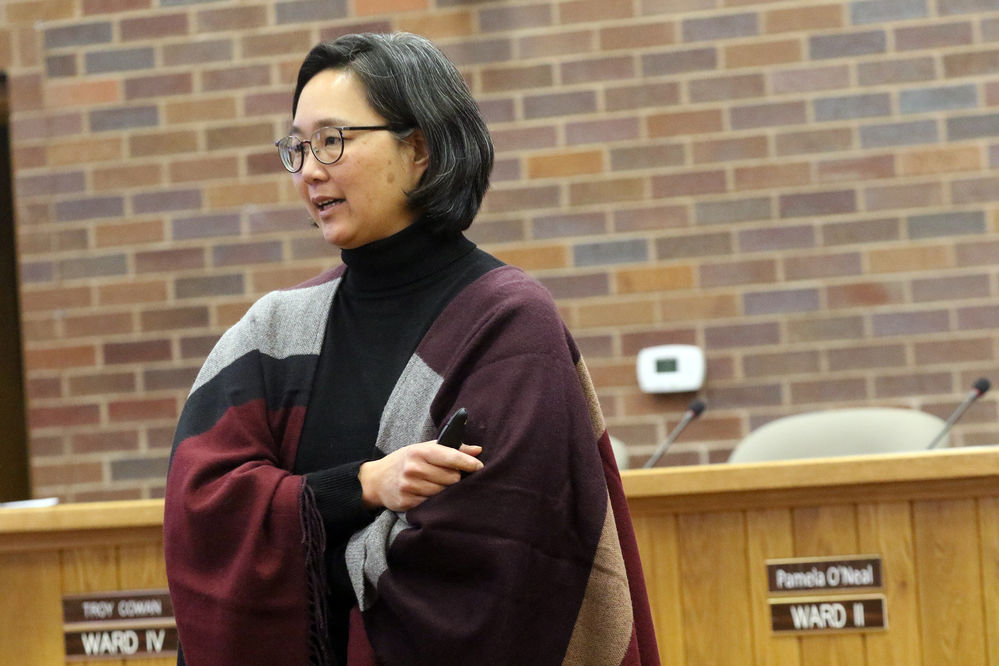 Kamie Stephen/Gering Courier Leann Sato shares what the Gering Public Library Foundation has accomplished in the last year and what they hope to do in 2020 during the annual meeting at City Hall on Tuesday. In the coming year, they hope to have a location for a new library secured, she said.

A crowd listens to remarks from Bill Peters, vice chair of the Gering Public Library Foundation, during the organizations annual meeting at City Hall on Tuesday. The community was encouraged to attend the meeting to share their thoughts, ideas and concerns about building a new library.

Kamie Stephen/Gering Courier Leann Sato shares what the Gering Public Library Foundation has accomplished in the last year and what they hope to do in 2020 during the annual meeting at City Hall on Tuesday. In the coming year, they hope to have a location for a new library secured, she said.

The Gering Library Foundation revealed their 2020 objectives on Tuesday during its annual meeting at City Hall. At the top of the list? “Designate a site and come up with a plan for a new library.”

The public was encouraged to attend and share their thoughts. Library Board member Suzanne Meyers said that city officials had also been invited.

In total, about three dozen people were at the meeting between community members, those involved with the library and representatives from some city departments and the parks board. One city council representative, Susan Wiedeman, was present.

Foundation chair Charles Lieske opened the meeting by sharing some background about the foundation and its hopes for a new library. He said the foundation is aware that the project would require a “serious financial commitment,” and they don’t take it lightly. They want to provide “a library that is a destination for generations and transforming our library from a book depository to a true community center.”

There are a number of issues with the current library building. An architectural study of the building suggested that to meet the needs of the community, it would need to be at least 18,000 square feet. Right now, it is less than 12,000, library director Diane Downer said in a previous interview with the Courier.

In 1995, the city’s comprehensive plan mentioned the need for a new library, saying it would need to be expanded within the next five years.

“We knew we outgrew our library 25 years ago,” said Leann Sato, foundation secretary. “It’s like leaving a kid in shoes that are too small.”

The foundation has explored renovating the current building, as well as possible locations for a new library. The building was constructed out of concrete to serve as a storm shelter, which will make renovating it difficult.

Because of structural issues, the building cannot be expanded upward. It can be expanded outward toward the street, but there is only enough room to come out about 15 feet.

Even if the building is remodeled, accessibility will remain an issue, said foundation member Penny Businga. There is a chairlift that goes down to the basement, but it hasn’t worked consistently in over two years. Downer said they hope to have it fixed this year, but even when it is repaired it will not be able to transport modern, motorized wheelchairs because of their weight. Walls would likely need to be knocked down so a whole new lift could be installed, which would take up additional space.

The impact of inaccessibility goes beyond checking out books, said Businga. With the basement being inaccessible, the use of the community room and the ability to attend youth programming downstairs is limited to those who are able-bodied. A new building would feature universal design, which means it is accessible to everyone.

Lieske said the foundation feels it would be more cost effective and better for the community overall to build a new library, because although it is an investment, a new building wouldn’t require more updates in the near-future.

“When you’re looking at $5.1 million to redo what you’re sitting on, versus the $6 million range on a new facility,” he said. “At that point, it doesn’t seem to the foundation that it makes a whole lot of sense to dump another $5 million into that building.”

Of more than a dozen spots that have been proposed, most have been eliminated for various reasons, leaving two sites: One on 17th Street and one at 13th and K Street.

Several community members voiced support for the 17th Street location during the meeting. Among them was parks board member Don Gentry who said the location could help improve Northfield Park. Currently there is not an estimated cost for the project at the 17th Street site, but Lieske said it will probably line up with the $5.5-6 million estimate that was figured for the K Street site.

The tone of the public comment period was positive and hopeful, with several people expressing excitement for a new library. No one spoke out against the foundation’s vision. Lieske encouraged the community to continue sharing their thoughts.

“We do ask this: Partner with us and actively participate as we discuss and evaluate the needs and options,” he said. “Don’t let others do the heavy lifting and then come in at the 11th hour without the knowledge and the benefit of our discussions, and the analysis and the thought that went into shaping our final proposals.”