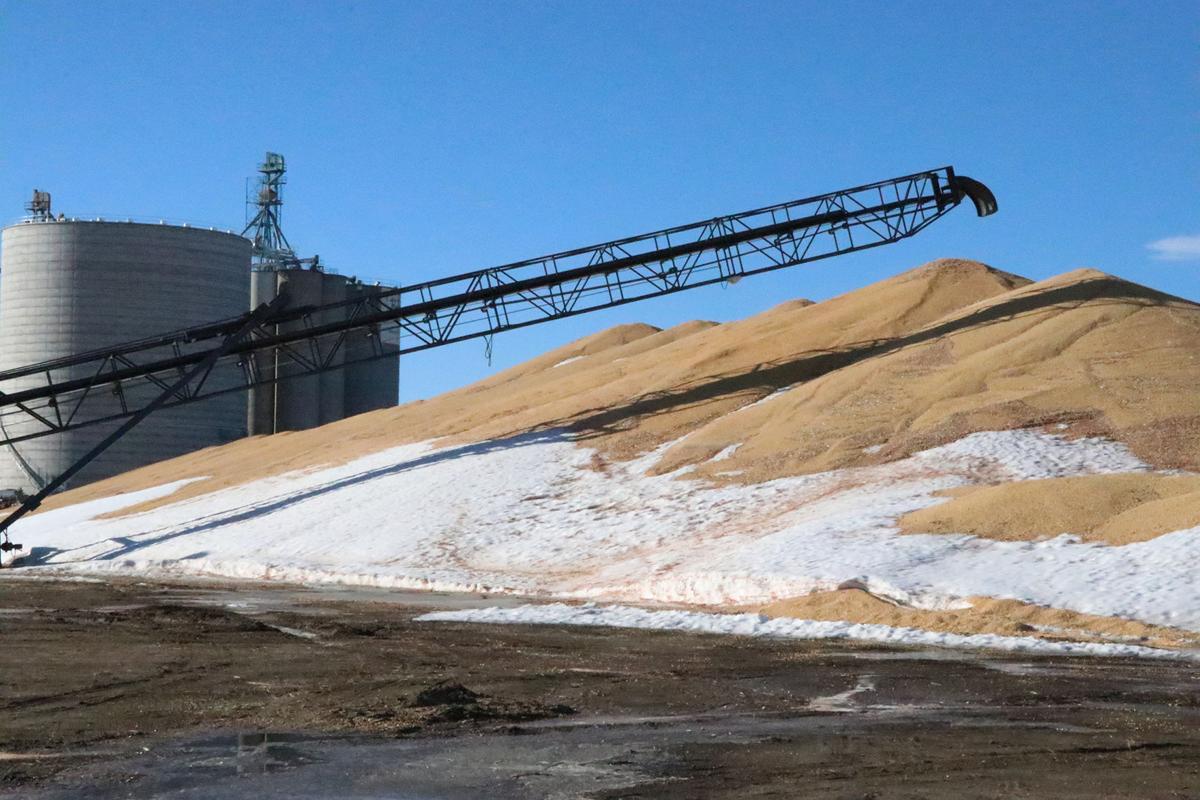 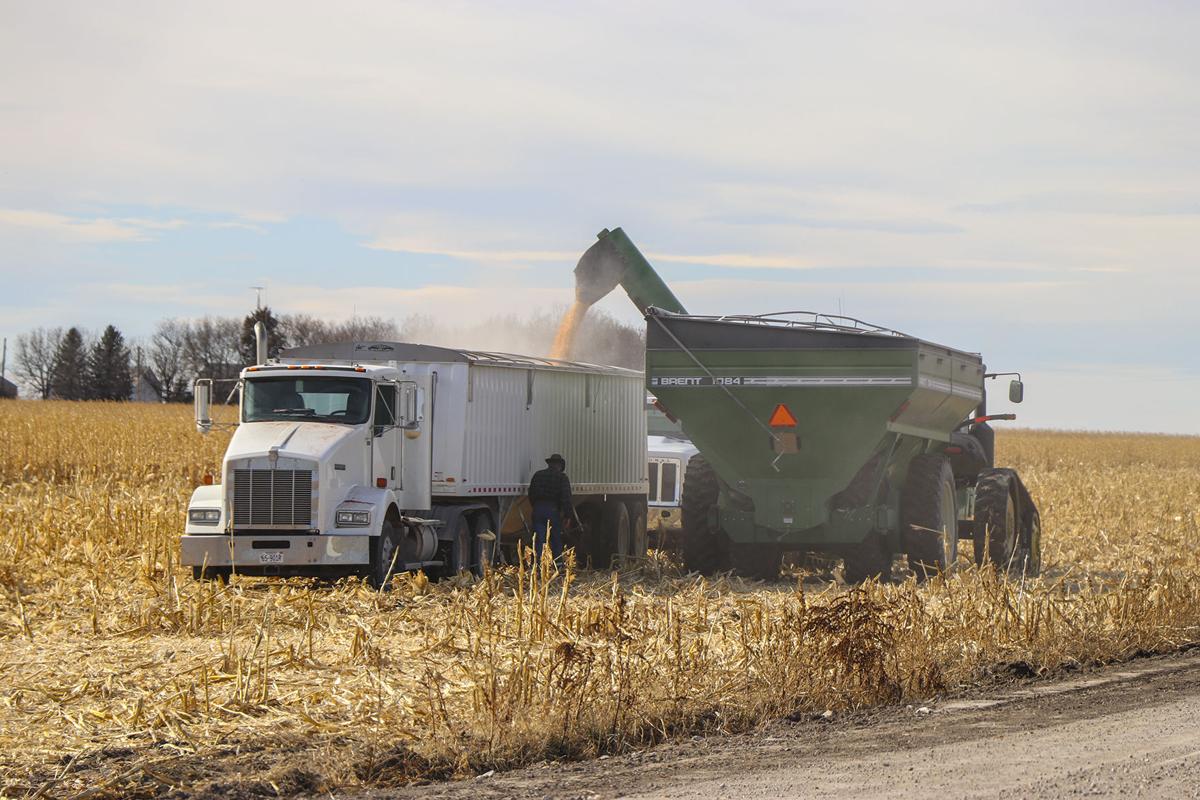 As corn from a Cullan Farm’s field was harvested back in November, Jim Elder walks back to check on the progress as a load is being dumped in his truck.

“It was a long and never ending harvest for sure,” said Elder. 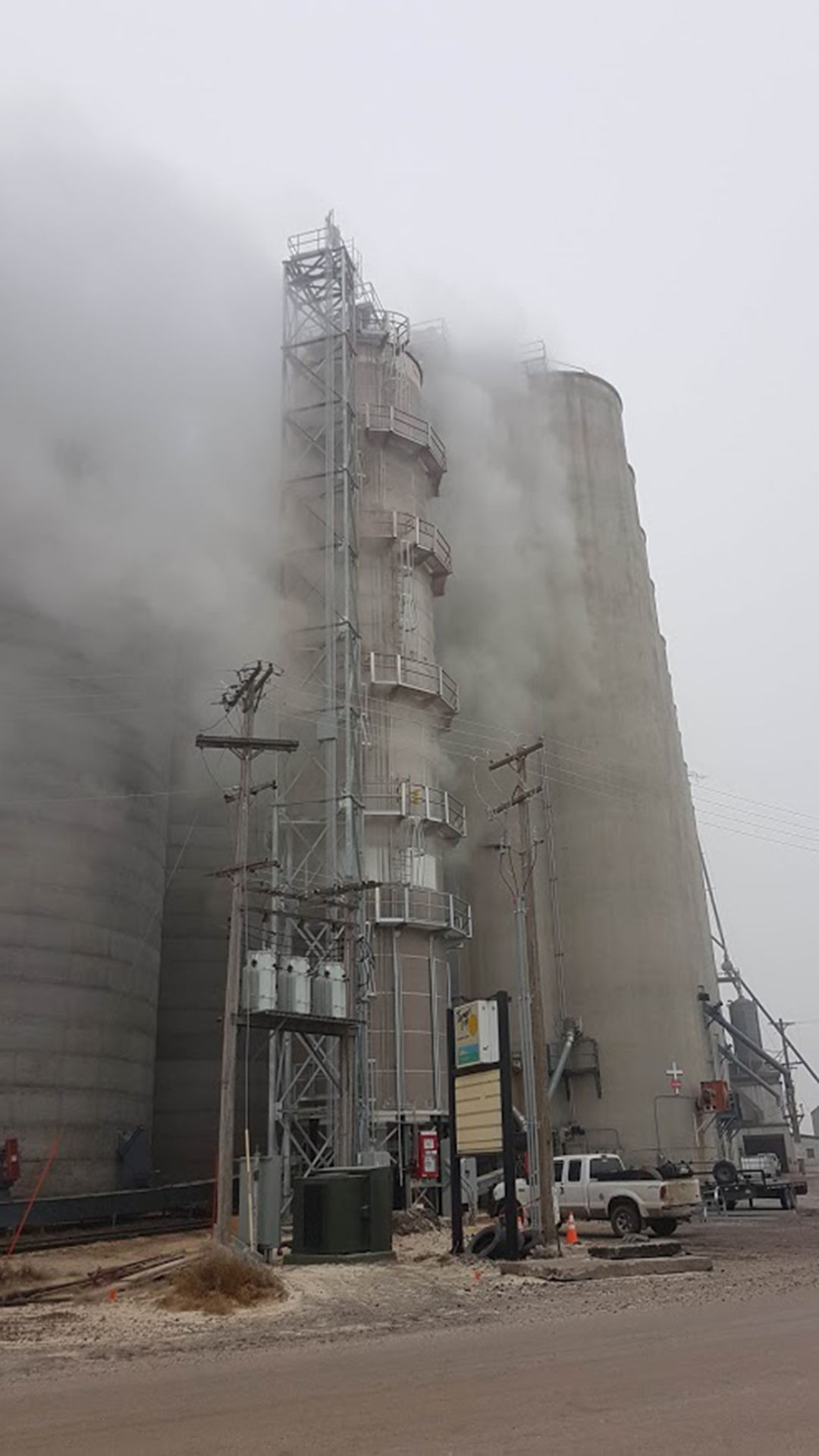 Steam rolls off the Farmer's Co-ops new dryer on a recent cold morning.

As corn from a Cullan Farm’s field was harvested back in November, Jim Elder walks back to check on the progress as a load is being dumped in his truck.

“It was a long and never ending harvest for sure,” said Elder.

Steam rolls off the Farmer's Co-ops new dryer on a recent cold morning.

The 2019 ‘Never Ending Harvest’ continued on well into the middle of December with trucks still bringing in loads to Farmer’s Co-op.

“There was 1,400,000 bushels of corn on the ground in Hemingford and the new bin is full,” said Farmer’s Co-op General Manager Bart Moseman.

He estimated that they’ve probably picked up 400,000 of that and still have around 1 million bushels left on the ground just north of Hemingford.

The weather in 2019 was less than cooperative for area farmers and ranchers as wet, harsh, and cold weather played a part when crops could be planted, how they grew, and then when they could be harvested.

“Overall quality is not where we would want to see it,” Moseman said. “Merchandising this crop is going to be challenging throughout the year.”

“Each of our regions has the same story where the crop that was put in at the right time and had the time to mature was a good quality crop. The stuff that was planted later just didn't get the heat units to finish. The spring weather made it so difficult for the farmer to get the crop planted in time.”

Although our area also saw a late harvest in the year 2018, the average completion date should be the middle of November for Box Butte County and end of November for Sheridan County.

“Our Mirage Flats location is just about wrapped up with a few guys still needing to get the crop out,” Moseman said. “Quality there has also been lower than we would want to see. The earlier harvested crop was heavier than the later.”

He noted that the Gordon area is probably just over 95% done.

“The weather has made it so difficult for guys to get this crop out,” Moseman said. “The Swett location in South Dakota is probably 5% complete. Again, winter weather playing havoc for guys trying to get this stuff out.”

“Quality has been an issue in our area this year,” Moseman said. “As harvest went along and the later planted corn came to town we saw lower test weights and higher damage levels.”

Average test weights are less than 54 pounds per bushel, which makes for a sub #2 grade. Not having #2 corn makes merchandising challenging as rail destinations have steep discounts for #3 grade corn.

“Quality in southern Box Butte County was OK with test weights above 55 pounds there but in the northern area of the county test weights averaged sub 54 pounds,” added Moseman. “This has made it more difficult for Farmers Coop to merchandise into rail markets because we cannot guarantee a #2 Yellow Corn grade.”

If you have ever driven past the new dryer at Farmer’s Co-op on a cold morning then you might have noticed the steam rolling from it.

As of now they have ran nearly 1.5 million bushels of corn through the new dryer.

“It has really helped us get dry corn into position to load on shuttle trains and one of the primary reasons we invested in the project,” Moseman said.

“Given the late plantings that took place this spring, and the early frost, the corn crop has been slow to dry down, thus a larger need for this tool than in the recent past,” said Chris Cullan of Cullan Farms located just south of Hemingford.

The new dryer was completed last year along with the massive new grain bin.

“We took the old dryer out a couple of years ago, I believe the last time it was used was maybe the mid ‘90s. There just hasn’t been really a need for a dryer,” Moseman said. “With the climate we are in and with the amount and variety of corn there just hasn’t been a need for a variety. The last five years or so we always thought that we maybe could have used one then the last couple of years we really felt that we needed one so we decided to go ahead and put one back in.”

Moseman went on to explain the market side of things:

“Hard Winter wheat has been going higher since the beginning of September. Cash price at the elevator has gone from $3.40 on 9/3/2019 to $4.45 today. Crop conditions have been a concern and one reason for the price support.”

“Corn has been relatively flat. The farmer really wanted a big rally thinking that the crop wasn't there in many places throughout the corn-belt. We still might get some price support after the market is able to digest all the information about the crop. Still acres to harvest in the Dakotas.”

“Commodity markets today or hinged more on geopolitical issues that cause different money flows in or out of commodities. We've had this ongoing trade issue with China that has affected many US agricultural exports to China. Trade is starting to improve some with promises of trade deals being signed but there needs to be caution in the market until it really is all resolved.”