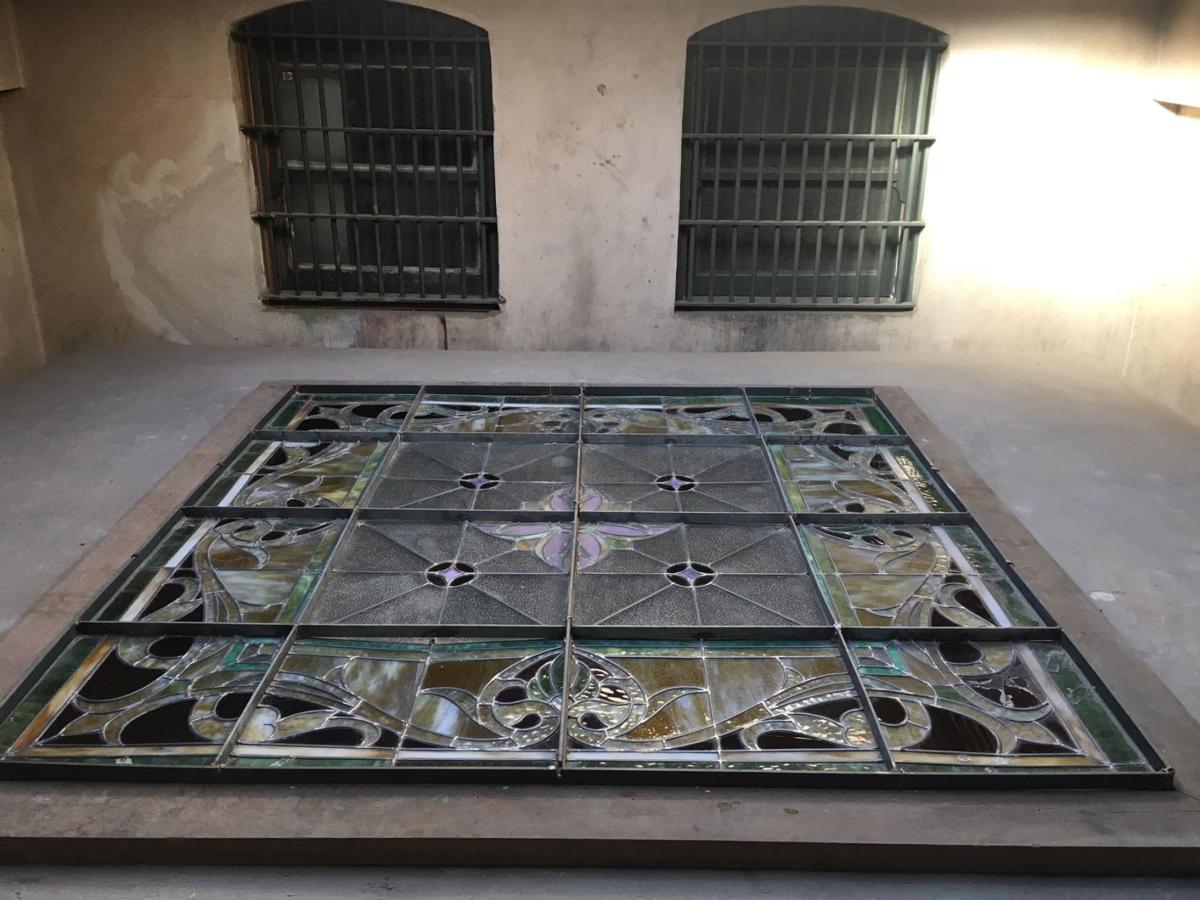 From above the beautiful stained glass sky light at the courthouse it is clear that the weight and age of the window has began to take a toll on the art work. Also notice the bars on the window on the fourth floor where the jail was formerly located. 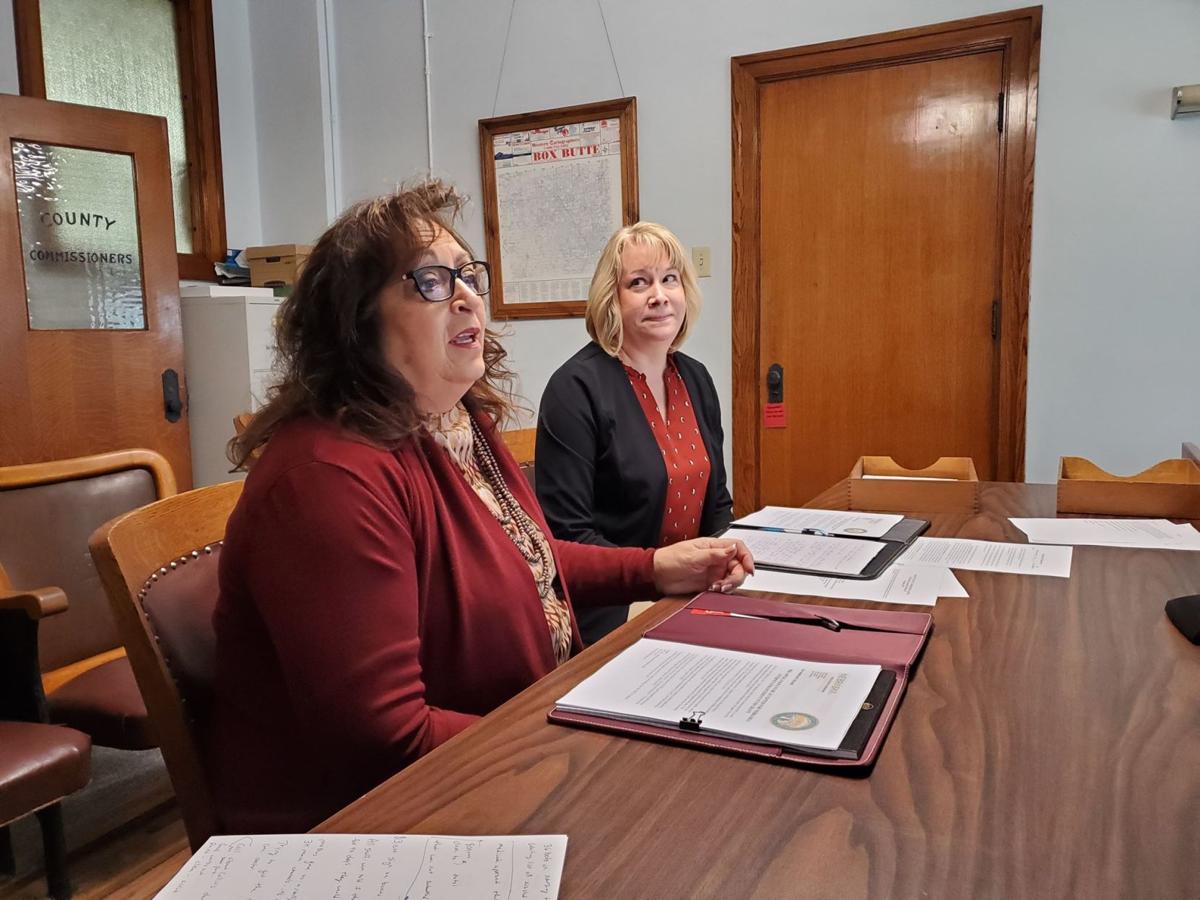 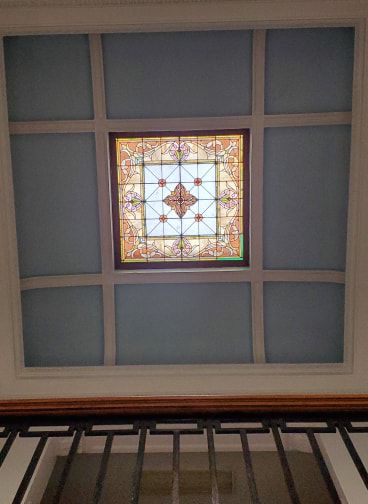 From below the now clean stained class sky light is much more vibrant. 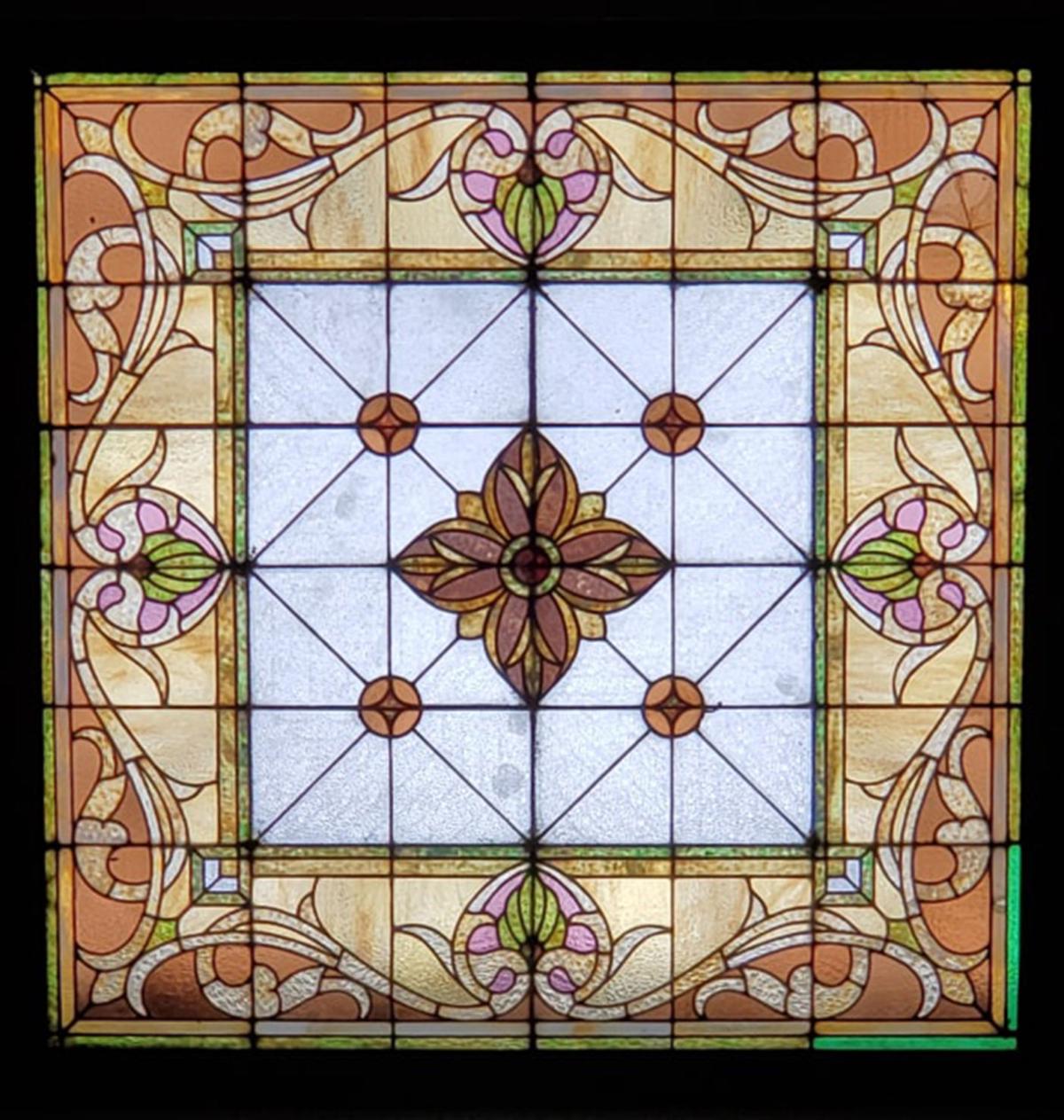 A close up picture shows the beautiful colors but also the cracks and flaws. 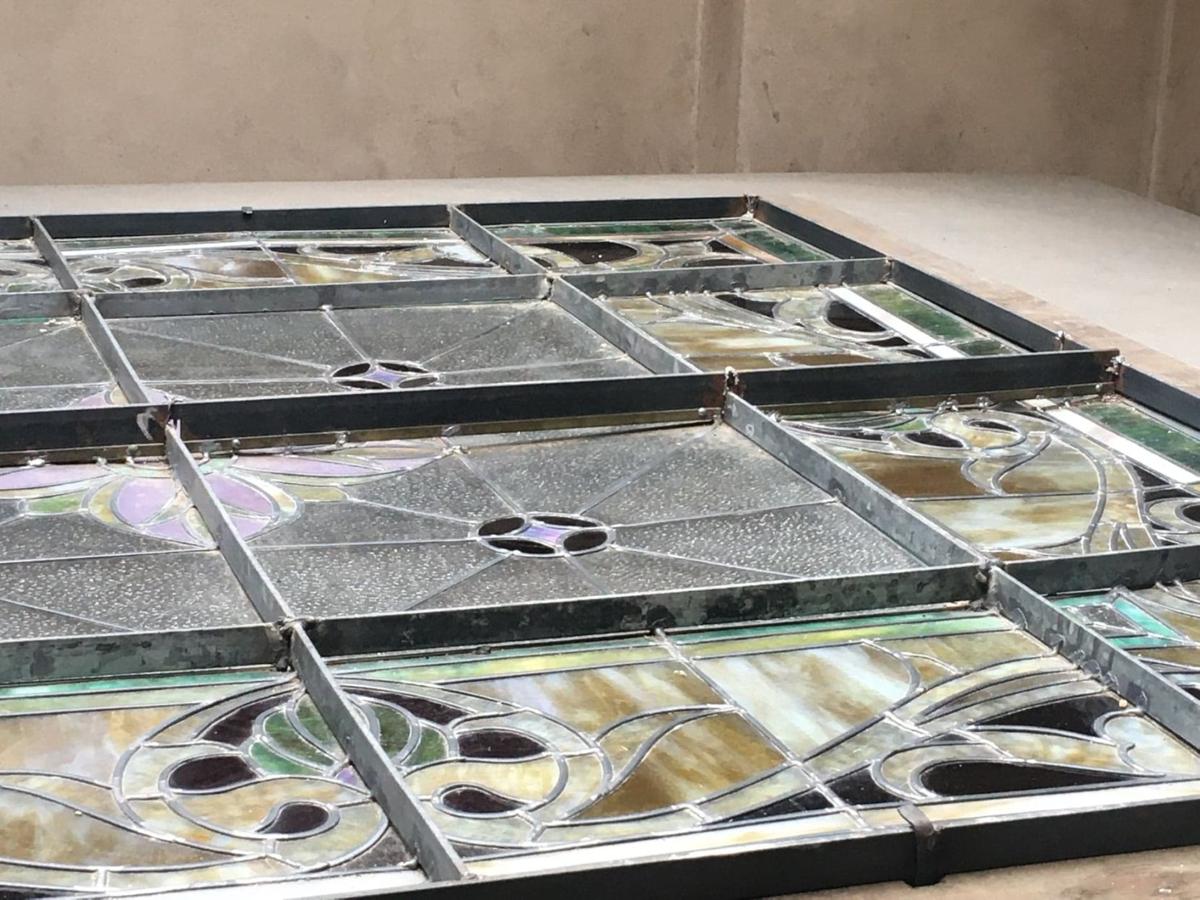 A close up of the stained glass window shows the beauty and damage of the antique piece of artwork. 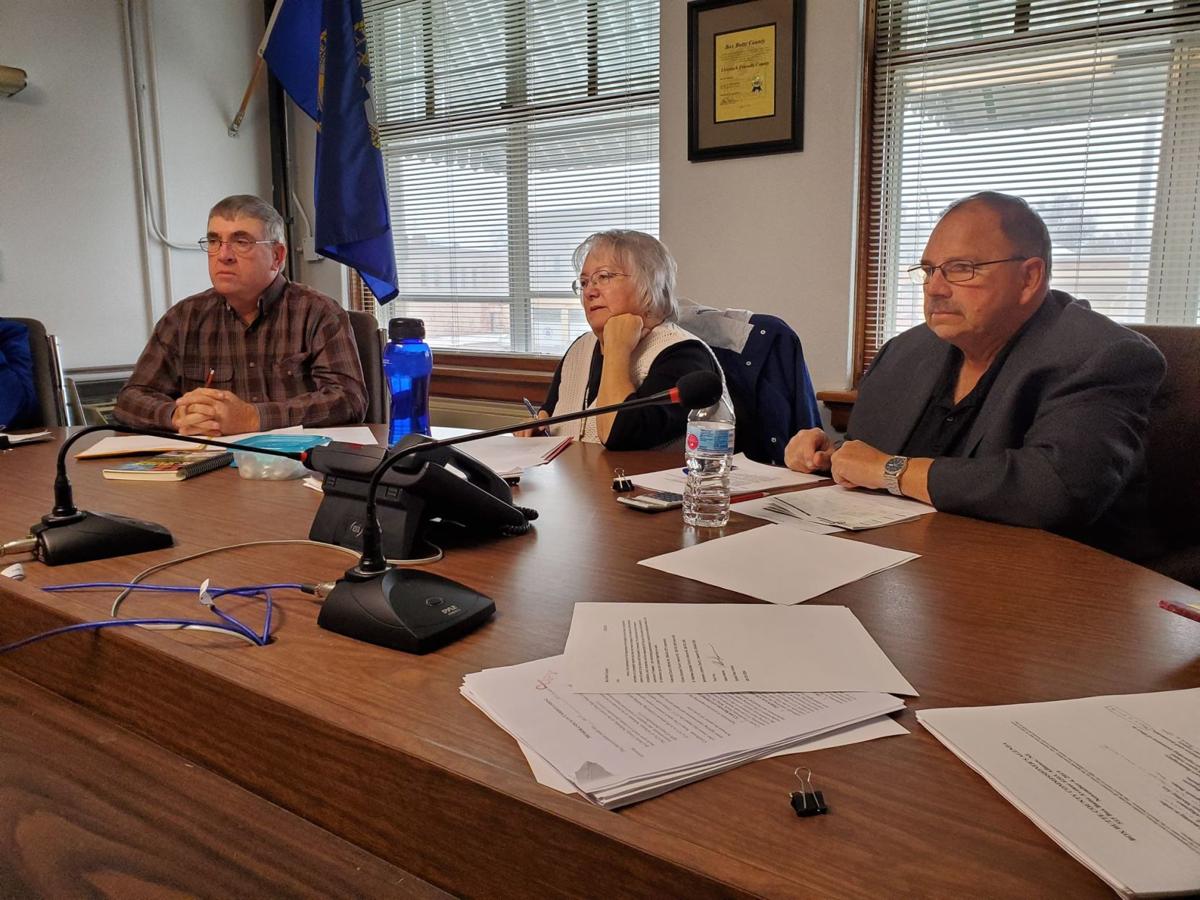 From above the beautiful stained glass sky light at the courthouse it is clear that the weight and age of the window has began to take a toll on the art work. Also notice the bars on the window on the fourth floor where the jail was formerly located.

From below the now clean stained class sky light is much more vibrant.

A close up picture shows the beautiful colors but also the cracks and flaws.

A close up of the stained glass window shows the beauty and damage of the antique piece of artwork.

Courthouse renovations and updates are underway at the Box Butte County Courthouse. During the first Commissioners Meeting for the month of November held on Monday, November 4th the board discussed that the roof had been refinished and employees of the courthouse noted that they had already felt a difference in temperature in the fourth floor storage area.

The cost of the project is estimated at $3.2 million but as with any renovations there are unexpected costs that can occur.

"After we uncovered the atrium on top they got a good look at the stained glass and realized that it needed repaired," said Chairman Doug Hashman. "You always find something besides what you originally look at."

"When you get up there and look out over the stained glass some of the lead is broken and crumbling but because of the weight of that and the weakness I would say it has dropped an inch/inch and a half away from the main canes that hold the glass up there," Lore said. "It's not something that needs to be done tomorrow but it needs to be done within the next couple of years."

In order for the repairs to be made, the stained glass piece could either be taken out in one piece through the top or in sections through a window in what used to be the old jail located in the fourth floor.

Local stained glass worker Val Keenan took a look at the 68x68 inch window with Lore and White. She gave a quote stating that the price for repair would never go higher than $6,240 if she were to do the project.

"The glass all has to be cleaned in order to put the lead back into the edges," Lore said. "It would really be like making the window all over again."

"There are several pieces of cracked glass that would have to be replaced and several places where it looks like someone had repaired the glass with pieces of microscope slides," White added. "She also said she could redo that rebar that is holding it all together and make it out of something more light weight." s

"I didn’t realize it was in as bad of a shape that it was until we got up there and really looked at it," Lore said.

Both Commissioners Hashman and McGinnis thought that it was a good idea to communicate with Berglund Architects specialist to see if they had someone that they recommend for this type of work. The subject was put on the agenda for the next meeting.

While they were up there inspecting the stained glass, White cleaned it as best as she could and it looks remarkable. So take a look up next time you stop by the Courthouse.

“I’m really excited to be able to bring our General Manager Tonya Mayer in front of the Commissioners,” Jespersen said.

“Recently we were informed that the Nebraska Internet Enhancement Fund is going to roll out another grant,” Mayer said. “That was a surprise to us as we didn’t think they were going to do that again… so we are kind of under an extremely tight deadline to get some things put together. Pre-applications are due December 6th so we have just a month to figure out where and what we want to do exactly. We are just coming to you ahead of the game to ask for your support. You’ve been very supportive about expanding fiber into the rural areas of Box Butte County and that’s what we want to continue to do. We have four or five projects in mind but have to narrow it down to just one.”

The maximum you can ask for is $75,000. Last year they were given $25,000 for the Otto Road project. That project is not complete yet. My goal is that the entire rural Box Butte County has fiber.

The Commissioners were excited and after asking some questions they gave their full support.

“When you read all of the farm magazines I’ve noticed that there’s still a big push to get rural up to speed and I think we’re doing quite well,” Hashman said. “Your percentage of fiber optics that you offer to customers has to be higher than other phone companies in the state no matter big or small.”

“In the country,” noted Jespersen. “That’s why when the first project went in, however many years ago, CNN came out; because it’s not happening outside of cities. That’s the piece that we get to continue on with. We may not get it but we’re going to try and we’re very excited that this happened.”

Panhandle Blocks Among Those Awarded at Alliance Chamber Banquet