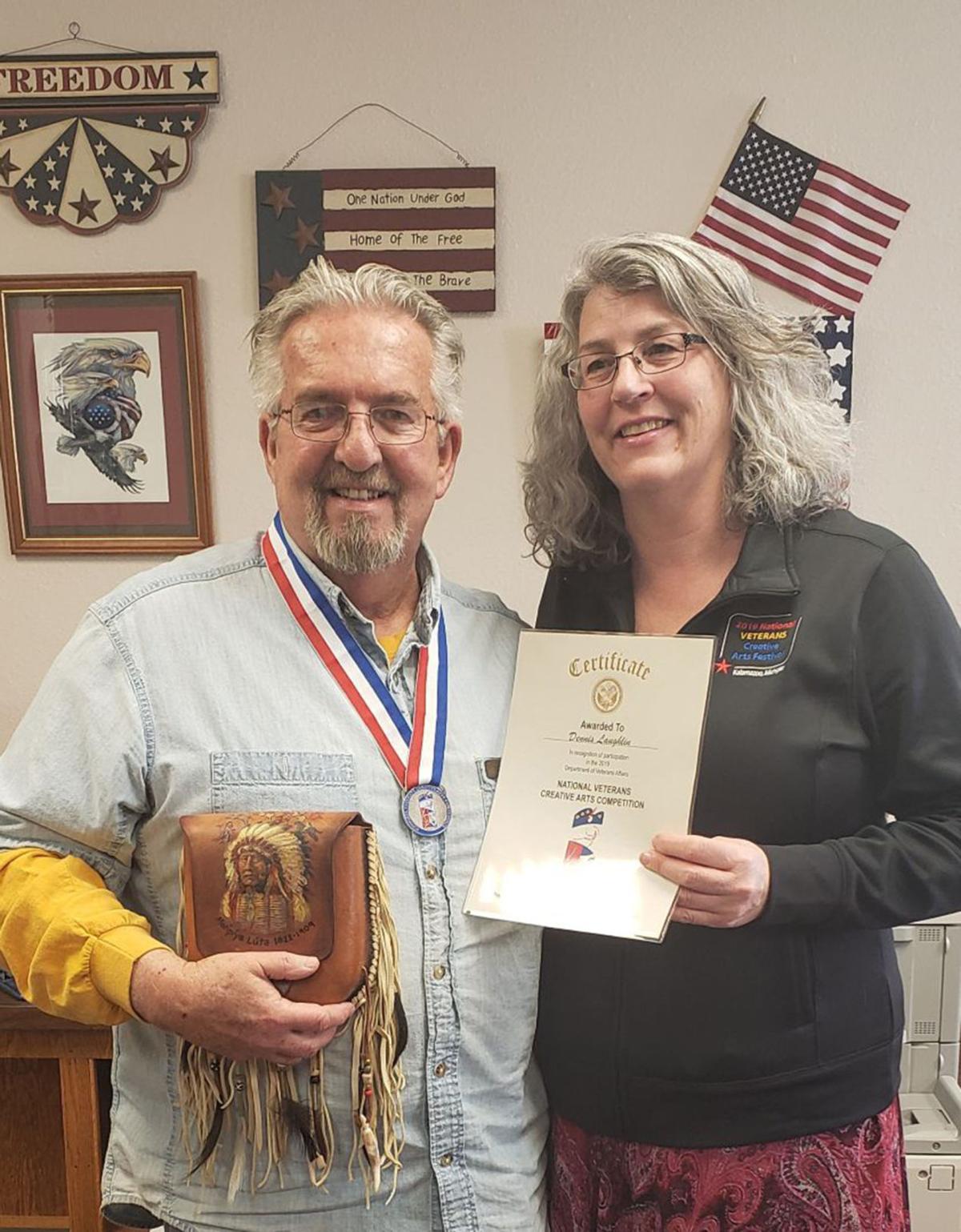 Dennis Laughlin with Mary Culbertson, Recreation Therapist, from the Black Hills Health Care System in Hot Springs. Culbertson presented Laughlin with a medal and certificate of his Art Entry into the National Veterans Art Show. 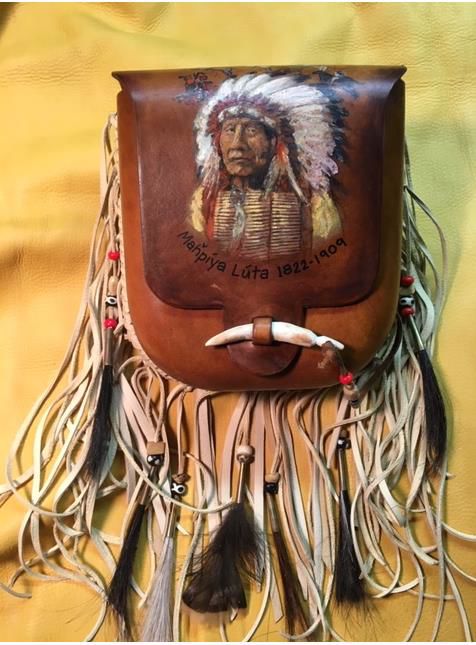 Dennis Laughlin with Mary Culbertson, Recreation Therapist, from the Black Hills Health Care System in Hot Springs. Culbertson presented Laughlin with a medal and certificate of his Art Entry into the National Veterans Art Show.

His entry into the Mixed Media Category is titled, “Chief Red Cloud Tribute”. To qualify for the mixed media category the single piece of art must contain the distinct use of two or more applied or fine arts techniques in the creation.

“The project was accomplished my making a wooden mold and ‘wet-forming’ the leather around the wood mold,” said Laughlin. “The leather is vegetable-tanned tooling cowhide leather, the lacing is buckskin, and the beads are made from buffalo bone. The horse hair is from a local Paint horse, similar to those ridden by the Lakota. The turkey feather is from a turkey I hunted several years ago.”

“The cover flap portrait of Red Cloud was done with oil paints. The inner part of the bag is done with ink, and the white hair is accomplished by using a scalpel blade to scrape the fine lines. The "circle" is 24K gold, symbolic of "Red Cloud's War" to stop the migration across sacred territory to the gold fields in Montana.”

“The printing is from words spoken by Red Cloud after the massacre at Wounded Knee on December 29, 1890,” Laughlin added.

“While I was stationed in Vietnam, I read the book by Dee Brown, ‘Bury my heart at Wounded Knee’, which affected me greatly. Growing up with Native American friends in my neighborhood, I became very interested in the culture and spirituality. I saw the damage and destruction caused by alcoholism and abject poverty. As a kid, I was always amazed by the pride and fortitude of my friends, no matter the circumstance. During the summers, they would travel back and forth from the Pine Ridge Reservation. ‘Chief Red Cloud’ always stayed in my mind, as one of my friends said his family were descendants of Red Cloud.”

Laughlin spent eight and a half years in the United States Air Force as an artist/illustrator. His last assignment was a two year tour with the USAF Thunderbirds, creating their airshow and publicity materials.

“During my career as an artist and graphic designer, I spent several years in Ohio,” Laughlin said. “One great opportunity was to design and fabricate interior and exterior Native American based displays for a resort on Lake Erie. I did extensive study on the Northern tribes and their influence on the culture of the Northern states and through the Midwest. I had the opportunity to track down and talk to one of the Native Americans I grew up with. I asked her about all her family and how they were doing. She said they were all dead as a result of alcoholism or murder occurring on the Pine Ridge Reservation. She said her only means of "survival" was to leave the reservation, relocating to Santa Fe, NM, and immerse herself into Native American spirituality. She is an artist, married to an artist, and doing well.”

The National Veterans Creative Arts Festival is co-sponsored, on the local and national level, by the US Department of Veterans Affairs and the National American Legion Auxiliary. In 2019, over 3,500 Veterans from 130 VA medical facilities entered the art, music, drama, dance, and creative writing competitions. The National Festival is held a different city each year. In 2006, it was held in Rapid City, SD and to date it hasn’t been held in Nebraska. It began in 1989 when it was held in St. Louis, Missouri. 2019 marked the 20th Festival where the American Legion Auxiliary co-sponsored the Festival.

To be eligible for the 2020 National Veterans Creative Arts Festival you must to be a Veteran that is enrolled to receive medical care at a VA Medical Facility before submitting an entry into a local competition. Eligible Veterans can submit entries through one VA Facility per year, and work with a VA Staff person throughout the process. At BHHCS VA-HS this means working with Recreation Therapist Mary Culbertson 605 890-2781.

The deadline to enter the local competition at BHHCS VA-Hot Springs is Feb. 29, 2020. Entries may be submitted into five different divisions: Art (50 categories), Creative Writing (13 categories), Music (44 Categories), Drama (21 Categories) and Dance (12 Categories). Each eligible Veteran can enter in 3 categories per division.

Panhandle Blocks Among Those Awarded at Alliance Chamber Banquet