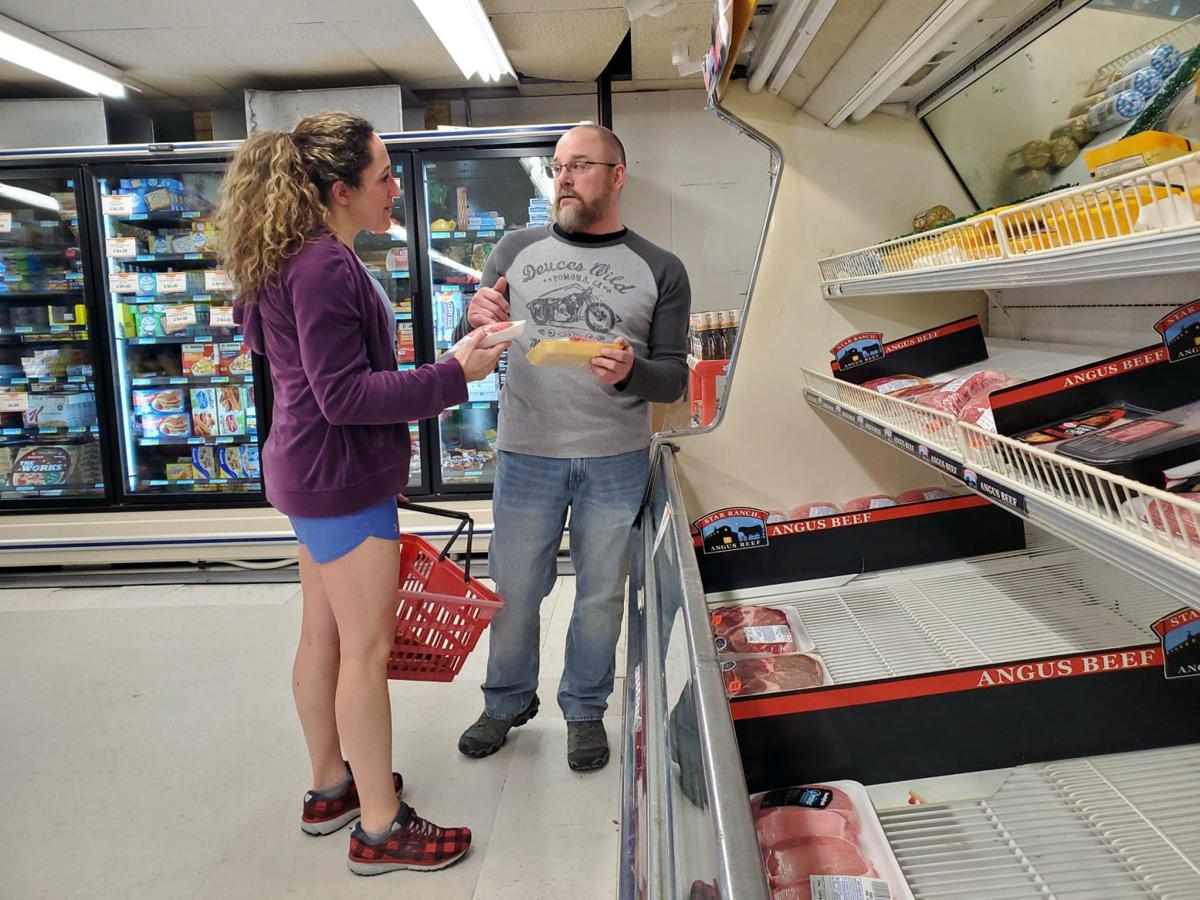 Raben’s owner Mike Raben discusses meat with local customer Riki Hunter. Raben ground a record amount of beef on Monday and again on Tuesday. Keeping up with the demand of people stocking up due to social distancing and also the incoming blizzard has been a challenge. 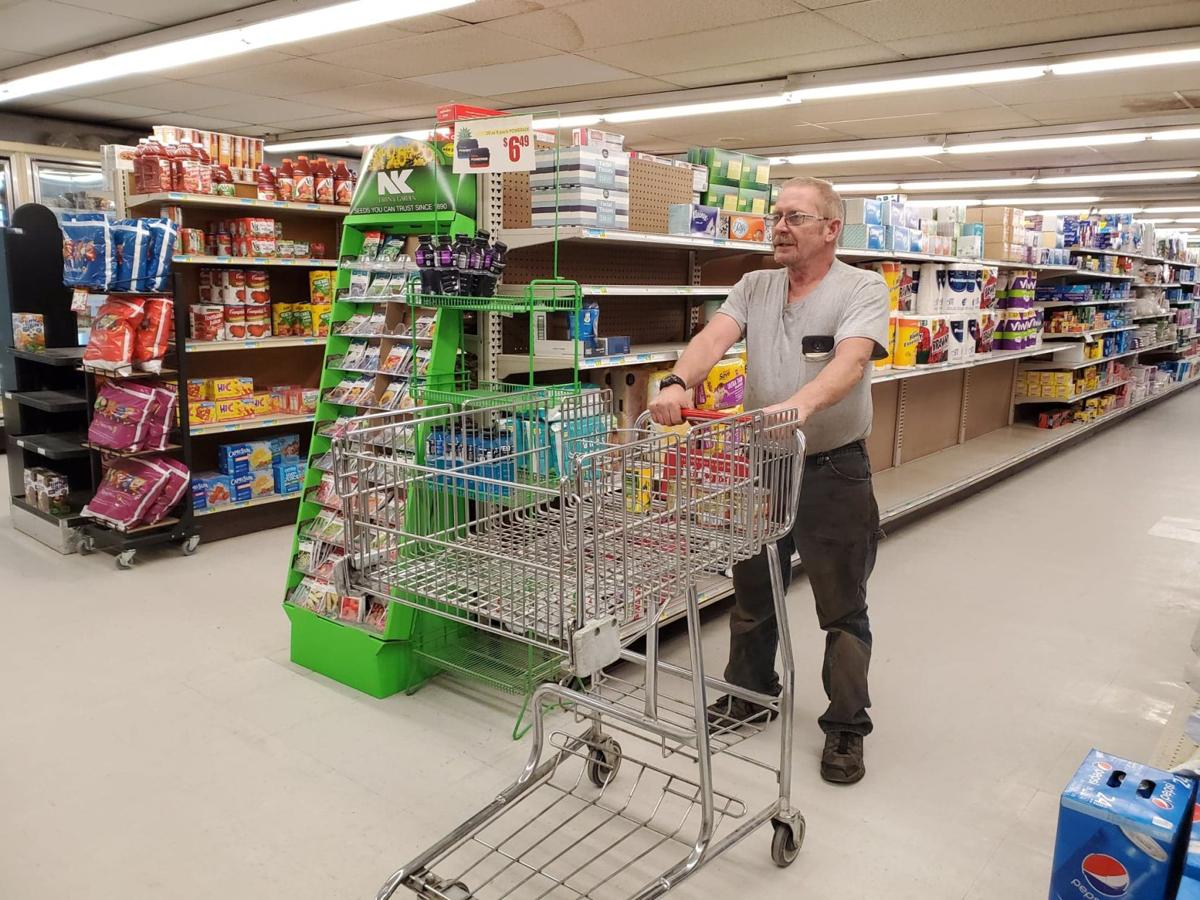 The empty toilet paper shelves in the background is just one area of the store that was visibly bare due to the high demand.

Raben’s owner Mike Raben discusses meat with local customer Riki Hunter. Raben ground a record amount of beef on Monday and again on Tuesday. Keeping up with the demand of people stocking up due to social distancing and also the incoming blizzard has been a challenge.

The empty toilet paper shelves in the background is just one area of the store that was visibly bare due to the high demand.

Since we will be socially distancing ourselves for at least the next couple of weeks, there's no doubt that everyone has been trying to prepare for quarantine. On top of that a big spring snow storm should be hitting right about now which always sends people into a panic about stocking up.

Last week the shelves with items like toilet paper, hand sanitizer and sanitizing wipes were pretty picked over if not sold out at our local stores. Then milk, bread, eggs, and flour weren't far behind.

"Eggs were gone by Friday," said Raben's owner Mike Raben. "I ran out of milk this morning."

Monday morning a panic struck in Alliance when certain items were nowhere to be found. One of those just happened to be ground beef.

Raben made a post on Facebook that he just happened to have ground beef which sent a crowd of people into his store.

"I ground at least 350 pounds of burger today," Raben said. "I have never done that much burger in one day in my eighteen years of doing this. Not even close to that much!"

"Hands down more than I've ever done in one day," said Rabin. "I've done maybe 100 in a day during the fair but nothing like this."

Whitney Baldwin with the Community Table in Alliance called in a panic because she could not find ham in Alliance. Raben came to her rescue too and said he would even slice it for her.

"I would slice some ham, then I'd grind burger, then slice ham, and grind burger... it was insane!" Raben said.

Some of the shelves are noticeably empty but it is completely unknown as to which items will be short on the orders that he places. "This morning I got an email with three pages of allocated items and it’s all paper products, cleaning supplies, laundry supplies, sanitizer, and wipes. What they are going to do is go off of a percentage of your past six weeks of purchases and give you a percentage of what you've ordered. So I bet I get maybe a quarter of what I ordered," Raben said.

The allocated items list was updated to include meat, milk, eggs, bread, and other food items.

"The virus still has to run its course," Raben said. "Eventually people will get stocked up and it'll calm down. Then it will be like crickets in here."

Currently a lot of items in the store are being rationed.

“It’ll eventually settle down but right now we’re in trouble,” said Raben. “Yesterday (Tuesday) was busier than Monday and I didn’t think that was possible.”

Another 220 pounds of beef were ground on Tuesday and 160 pounds of chuck roast were sold. He is currently not taking custom orders.

Taelar Krause at Table Top Meats said that they have had lots of phone calls and lots of people coming into the store.

During the panic on Monday they took orders for over 700 pounds of ground beef.

"Two of the big orders were from families that regularly order a large amount of ground beef so it's hard to tell how much of that was people trying to stock up or normal orders," Krause said. "But that is definitely more ground beef than we've seen ordered in a while."

"Typically, January is a relatively slow retail month for everybody so the extra business has been much needed," Krause said.

Right now they are trying to restock some of their regular products to be ready for more walk-in customers.

“We’ve had lots of foot traffic and lots and lots of calls,” said D’Ann Krause. “We’re starting to sell out of steaks and there have been lots of roasts purchased. We’re completely out of ground beef but we’ll have more on Friday.”

“The month of March has definitely picked up, which is great because February hurt us,” D’Ann said as she credited the low sales in February to people fighting the flu.

On another positive note, three customers that walked into Table Top Meats before noon on Wednesday alone mentioned that they had not been into the store before.

They are still taking custom orders.

Interestingly enough... "Currently we have a custom order ready but the customer is stuck in Australia in quarantine so we have to find extra freezer space until they can make it back to pick it up," Krause said.

She noted that they were a little worried with how far the government was going to take the quarantines.

"We have beef carcass hanging in the back right now so if we were to go into a lock-down situation completely I'm not sure what we would do," said Krause.

If you are trying to limit or avoid trips to the grocery store, you may be wondering what foods you should be buying when you know you're going to be stuck at home. You may be one of the ones that has stocked up already, but if not here are some that you may want to include on your future shopping lists.

Don't forget some frozen foods for meals, fun foods for snacks, drinks, hygiene supplies, and medications; oh and don’t forget about supplies for your little ones and for your furry family members too.

Please try to keep in mind that there's no need to buy out the stock at your local grocery store. It's also important to consider the needs of others and not overbuy.

So only purchase what you actually need! These items will last you awhile, which is convenient when you're unable to leave your home.

Box Butte Dam near spilling over