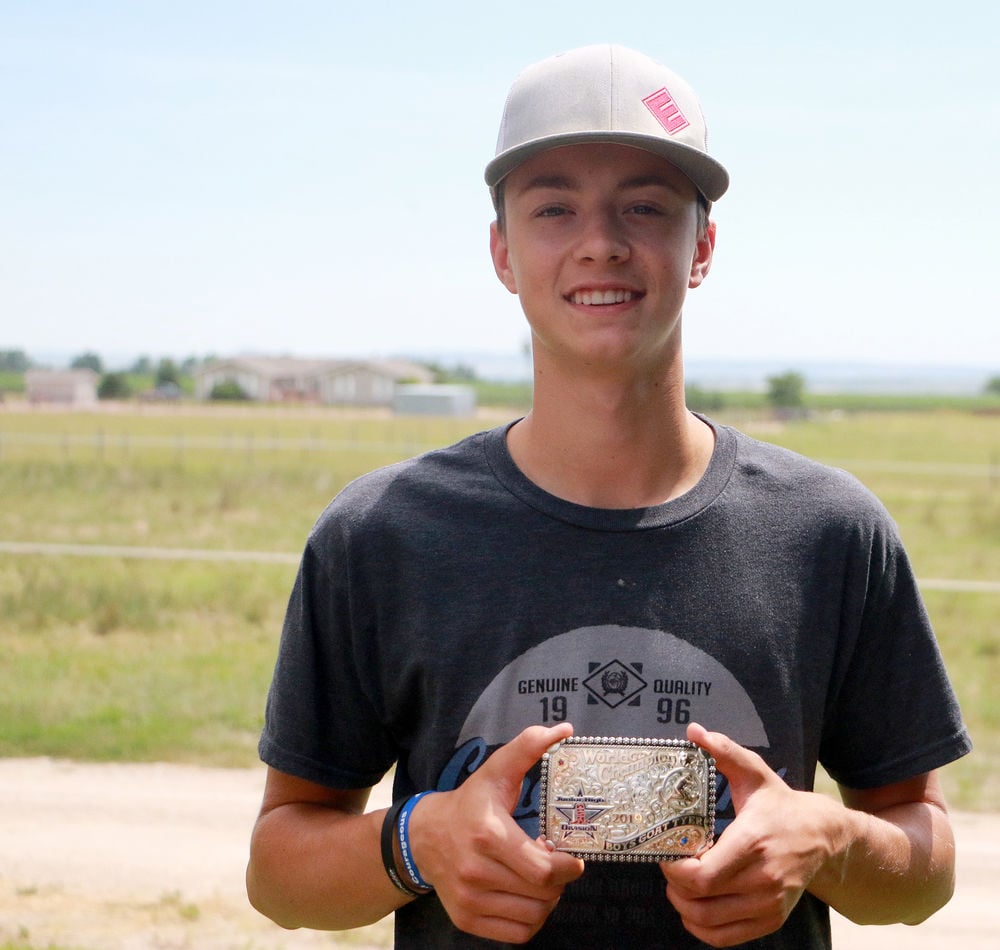 Tate Talkington smiles as he holds his World Champion Boys Goat Tyer buckle. He won the event in the junior high division in late June. 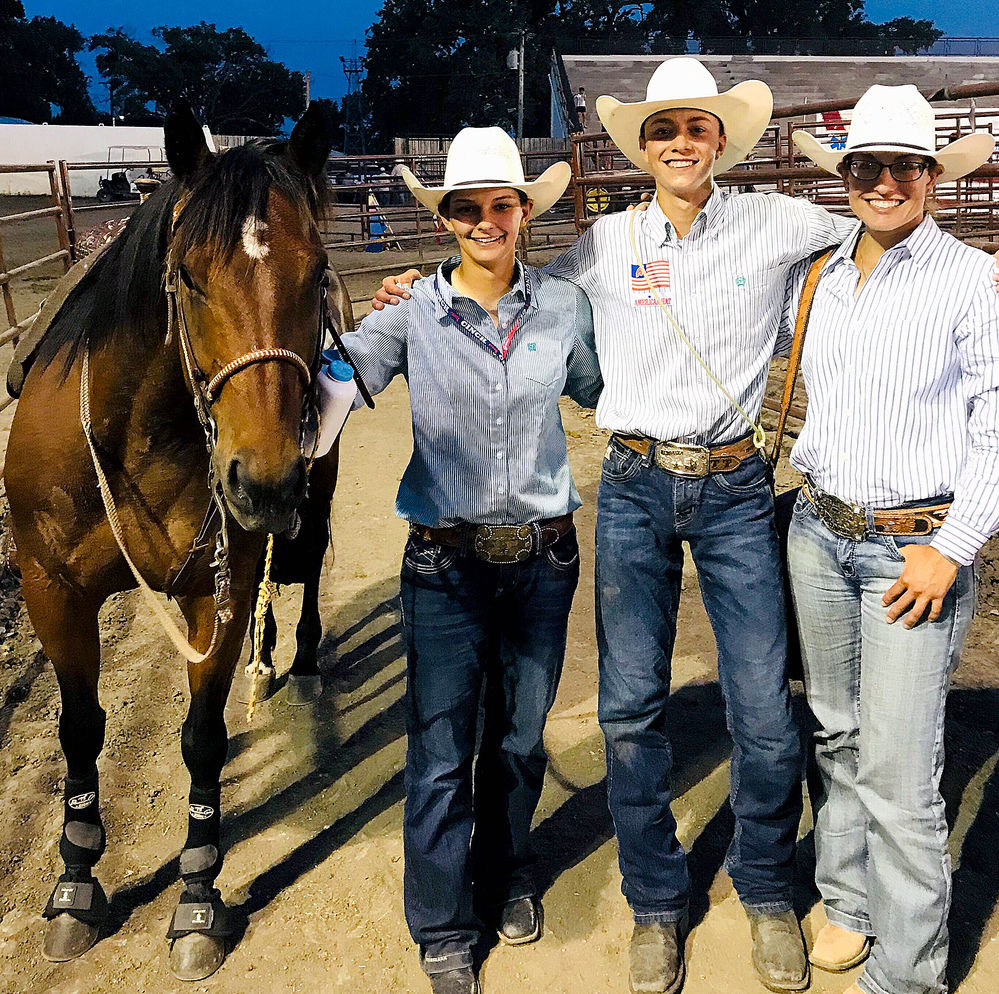 Tate Talkington stands with Libby Winchell, left, and Shelby Winchell, right after being named the world champion goat tyer. Libby raised the horse, Hardy that Talkington rode to the win. 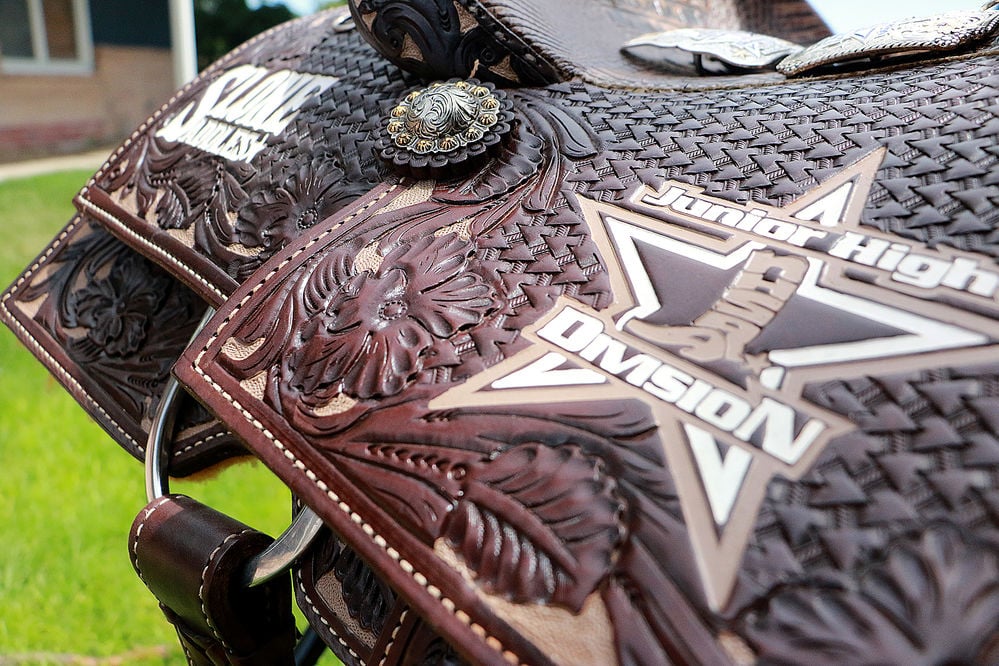 Tate Talkington's custom Slone Saddles features intricate details of craftsmanship and is a trophy he received after winning the goat tying event in the junior high division. 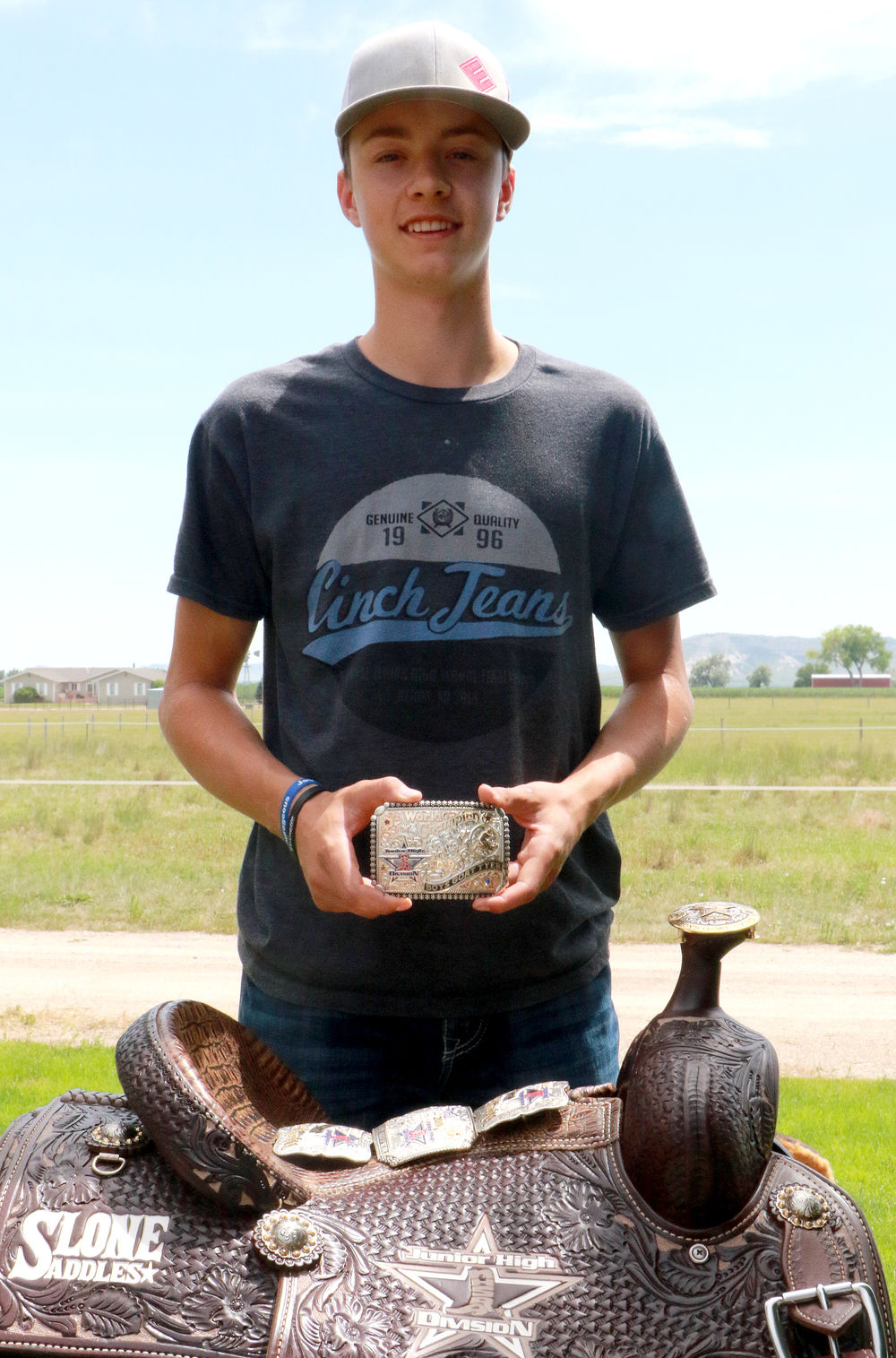 Tate Talkington holds his Junior High Rodeo belt buckle after being named the World Champion boys goat tyer. Talkington received a saddle and several other buckles for his rodeoing success. 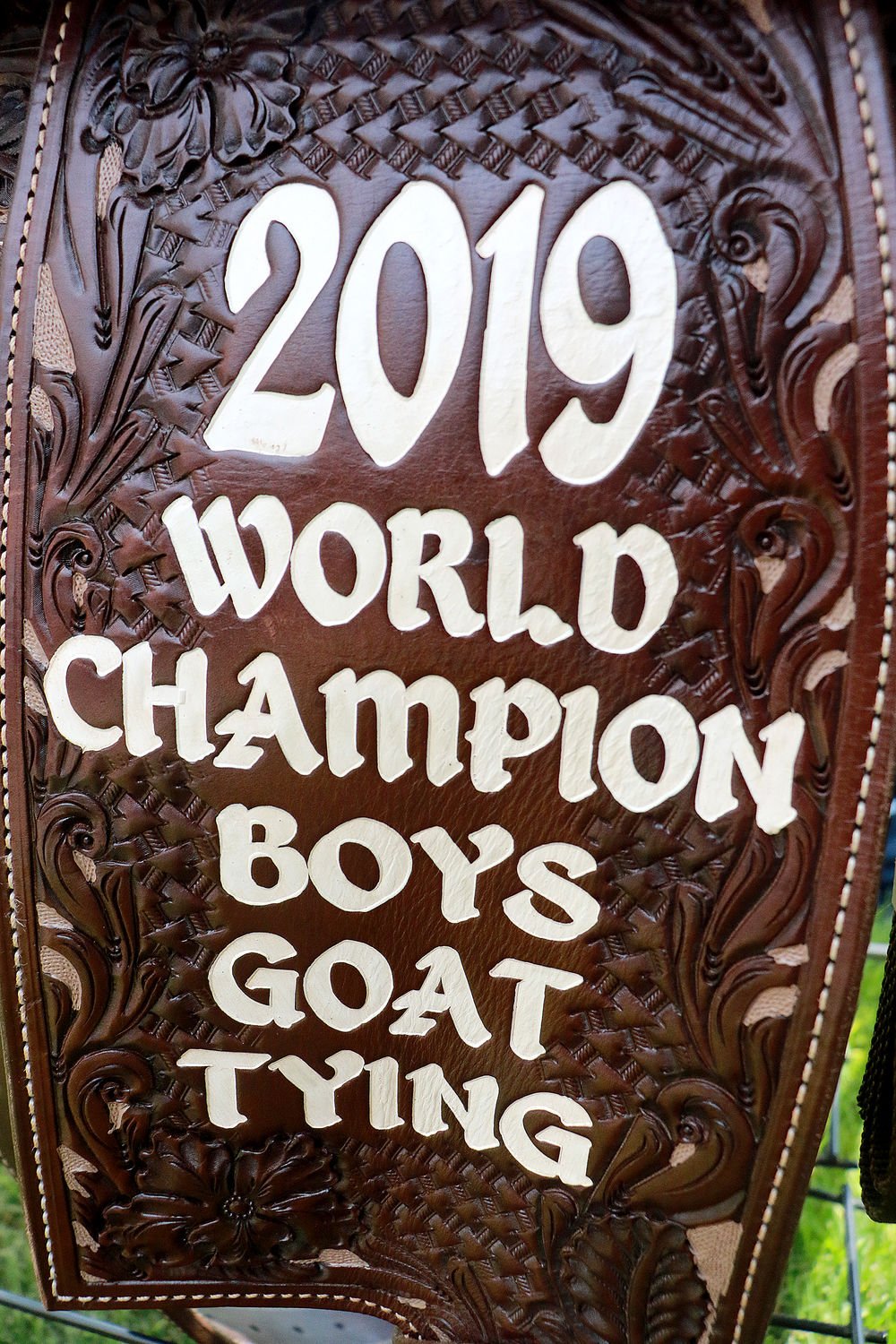 Tate Talkington of Scottsbluff received a custom saddle after winning the 2019 World Champion boys Goat Tying event. The saddle detail is handcrafted and will become a trophy saddle.

Tate Talkington smiles as he holds his World Champion Boys Goat Tyer buckle. He won the event in the junior high division in late June.

Tate Talkington stands with Libby Winchell, left, and Shelby Winchell, right after being named the world champion goat tyer. Libby raised the horse, Hardy that Talkington rode to the win.

Tate Talkington's custom Slone Saddles features intricate details of craftsmanship and is a trophy he received after winning the goat tying event in the junior high division.

SCOTTSBLUFF — As a 15-year-old who has dedicated his time outside of school to rodeo since the age of 6, Tate Talkington of Scottsbluff achieved his dream of competing on the world stage.

When Tate was growing up, he became involved in junior rodeos as he followed the path of his idol, his father, Shane.

“I wanted to be like him on a horse,” Tate said of his father. “I’d like to attend the same college as him, too.”

Tate’s mother, Brooks, recalls how “he always had a rope in his hand.”

As his junior high rodeo career came to a close, Tate dedicated several hours every day for months to be prepared to compete on the world stage. In the midst of spring training, his goat tying horse became injured, so he had to find another one. Mike and Shawna Winchell also had a family interest in rodeo and were good friends with the Talkingtons. When they learned about the injury, their daughter, Libby, allowed Tate to use her horse, Hardy.

The Winchells have worked with Tate for the past three years on the fundamentals of goat tying with the motto of "Smooth is fast." As Brook watched her son work with Hardy ahead of competition, she said having success spoke to how special Hardy is and the work Libby put into training.

“Libby actually raised and trained Hardy herself. That was very special I think because Tate’s competed in goat tying for years, but when he got on (Hardy), it was clear she’s a pretty special horse.”

Tate competed with Hardy in three rodeos by the time nationals arrived, which was four months.

During the 2018 nationals, Tate had the second fastest time, so he was hopeful this year he would have similar luck. After finishing in the top four in the state finals in May to advance to nationals, having family and friends there with him helped Tate stay focused.

“It calmed me down knowing that Libby and Shelby were there,” he said. “It helped with my nerves and confidence.”

As the arenas became bigger and the fans became louder, Tate found himself at the World Championship Rodeo Competition. The World Championship took place in Huron, South Dakota, and for 10 days, Tate competed against the best from America, Canada, Australia and Mexico.

“The crowd is huge,” Tate said. “I was more than excited to compete at that level finally.”

The top 10 finishers in each event would receive a buckle and the fastest of three head would win several prizes, including scholarship money.

After competing in the ribbon roping and finishing ninth in the world, Tate had about 15 minutes to get another horse and make it to a nearby arena for the goat tying contest.

As the goat tying event got underway, around 125 teen competitors ran two head, trying to dismount off the horse and tie three of the goat’s legs together in the quickest time. The goat has to stay tied for six seconds.

“I was the fastest on two head and I went last in the short round.”

He went into the short round with a 2.5 second lead with the time to beat of 11.1 seconds for the championship.

Sitting on Hardy looking into the arena, Tate could sense Hardy’s energy.

“Any horse that is at that level, I think they can feel when the stakes might be higher,” Tate said. “The announcer and the crowd during those events really pumps her up, so I could tell she was going to go fast.”

As Hardy bolted out of the gate toward the goat, Tate took a running step off her. With the goat flipped onto its side, Tate remembered the Winchells' motto and slowed down.

“Under pressure, he does well,” said Brooks. “I don’t worry because he always rises to the occasion.”

After hearing the announcer read off his time, Tate took off running out of the arena to hug Shane, Libby and Shelby. He had become a world champion in goat tying.

As Tate completed multiple interviews and was fitted for a custom jacket, his parents loaded the horses back into the trailer. That’s when it hit both of them what there son had just accomplished.

“Shane and I just looked at each other in awe,” Brooks said. “We stood at the trailer realizing what he did and Shane got teary-eyed.”

Tate’s world title came just after two other Nebraskans won the World Championship in team roping, which made this year’s rodeo championships special for Nebraska.

Tate finished ninth in the world in ribbon roping.

The 2020 high school rodeo fall season begins in August and will be eight weekends of competition.

Tate’s goal is to have a successful high school rodeo career and attend Tarleton State University in Stephenville, Texas, so he can continue following in his father’s rodeoing footsteps.