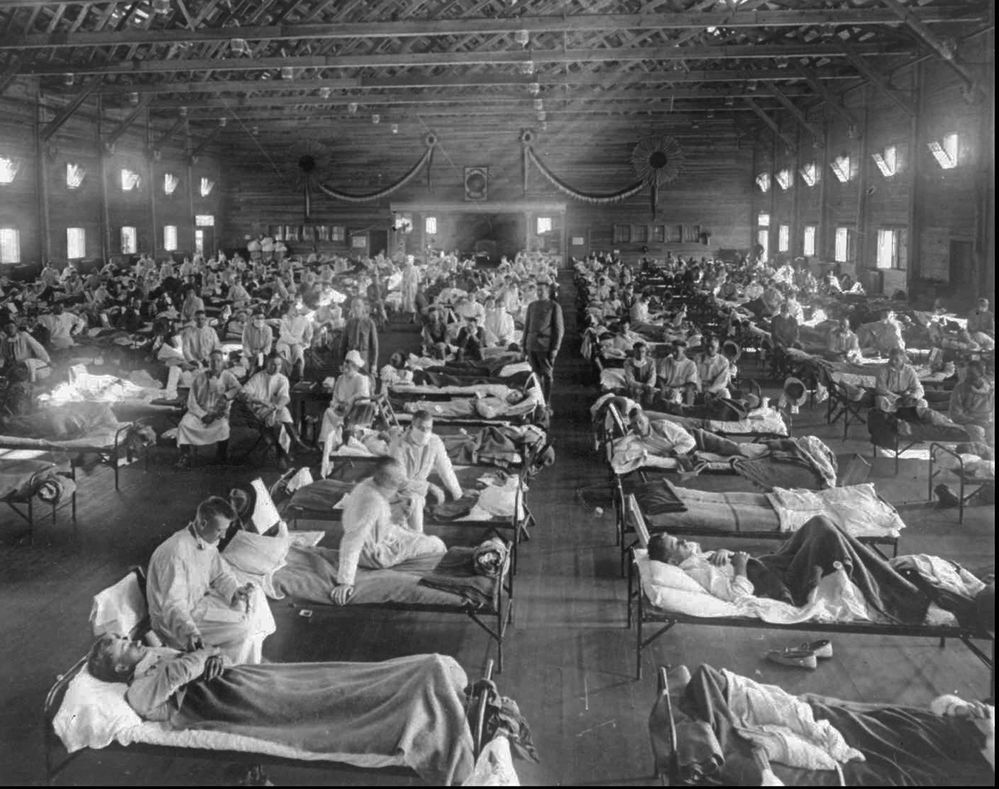 Influenza victims crowd into an emergency hospital near Fort Riley, Kansas, in this 1918 file photo. The 1918 Spanish flu pandemic killed at least 20 million people worldwide and officials say that if the next pandemic resembles the 1918 Spanish flu, 1.9 million Americans could die. 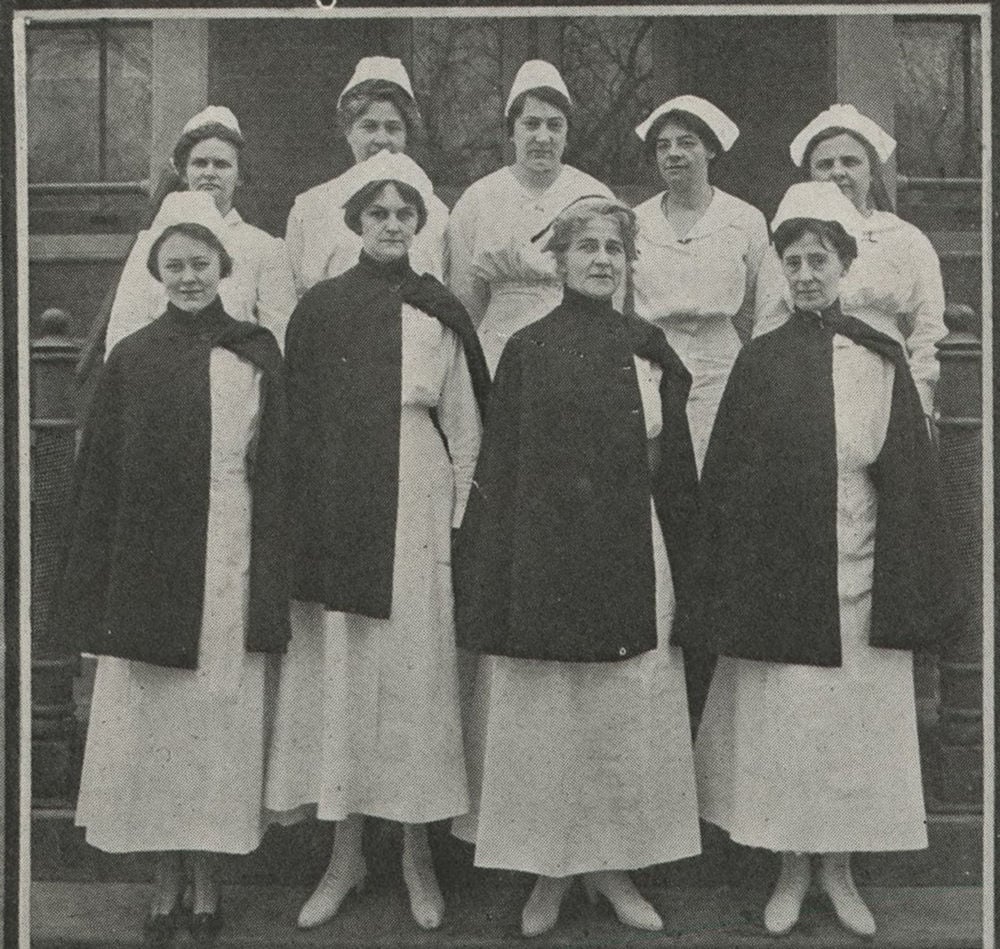 Nurses at Fort Omaha treated hundreds of soldiers at the base’s hospital, which at one point overflowed with military patients. Armistice Day coincided with the peak of the Spanish flu pandemic, which killed an estimated 675,000 Americans. 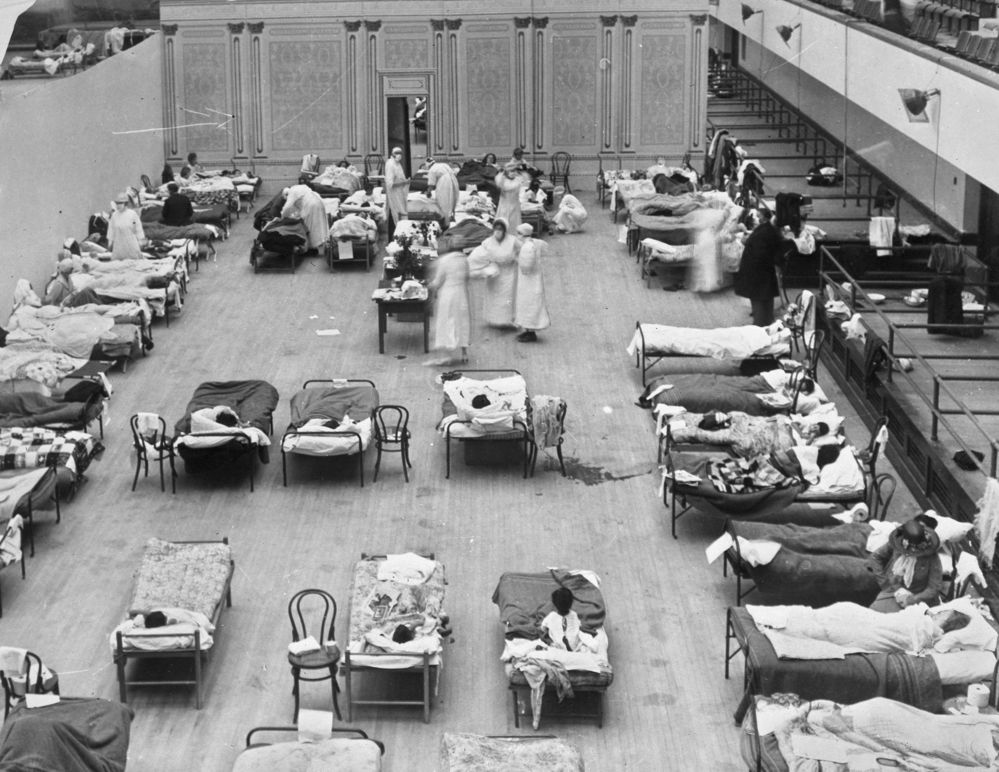 In this 1918 photo made available by the Library of Congress, volunteer nurses from the American Red Cross tend to influenza patients in the Oakland Municipal Auditorium, used as a temporary hospital. As scientists mark the 100th anniversary of the Spanish influenza pandemic, labs around the country are hunting better vaccines to boost protection against ordinary winter flu and guard against future pandemics, too. 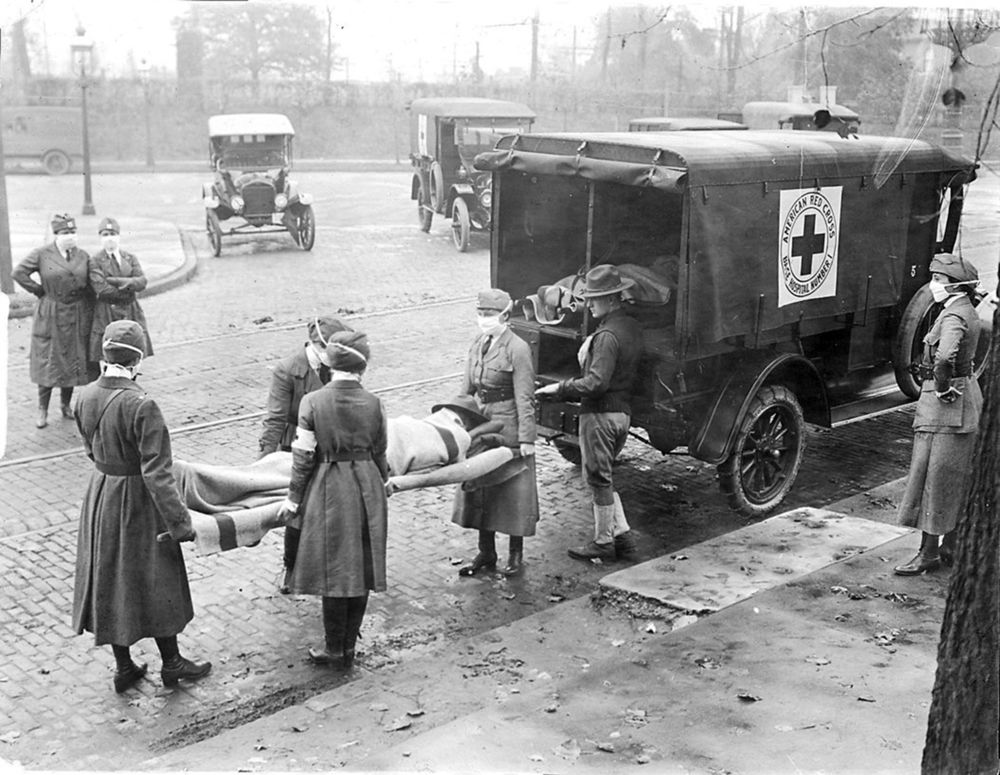 Influenza victims crowd into an emergency hospital near Fort Riley, Kansas, in this 1918 file photo. The 1918 Spanish flu pandemic killed at least 20 million people worldwide and officials say that if the next pandemic resembles the 1918 Spanish flu, 1.9 million Americans could die.

Nurses at Fort Omaha treated hundreds of soldiers at the base’s hospital, which at one point overflowed with military patients. Armistice Day coincided with the peak of the Spanish flu pandemic, which killed an estimated 675,000 Americans.

In this 1918 photo made available by the Library of Congress, volunteer nurses from the American Red Cross tend to influenza patients in the Oakland Municipal Auditorium, used as a temporary hospital. As scientists mark the 100th anniversary of the Spanish influenza pandemic, labs around the country are hunting better vaccines to boost protection against ordinary winter flu and guard against future pandemics, too.

The last time a pandemic stuck the Panhandle, Santa Claus got arrested.

The first reports of what would eventually be called Spanish Flu, or Spanish Influenza, came in the spring of 1918. As the year went on, cities across the country shut down in an attempt to stop the disease, which was killing thousands. At one point, Scottsbluff was seeing 100 new cases daily.

By the time the pandemic would come to an end, it would kill more people than World War I, including civilians. The war likely played a large role in the spread of the disease, as massive troop movements led to increased exposures around the world.

Symptoms of the virus included pneumonia, high fever, cough, dizziness and excessive sweating, according to History Nebraska. While most flu strains seem to affect the very young and the very old, the Spanish Flu seemed to be knocking out young adults who were otherwise healthy.

The Beginnings of a Pandemic

Despite being called the ‘Spanish Flu,’ it likely didn’t begin in Spain. During the war, countries involved, including the United States, made efforts to censor bad news so they wouldn’t encourage their enemies, according to History Nebraska. Spain was neutral in the war and chose not to censor press reports about the illness.

Although Spain was stuck being the virus’ namesake, researchers believe it likely began in a military camp — possibly in the United States.

According to the Centers for Disease Control and Prevention, the first outbreak was detected in March 1918 when more than 100 cases were reported at Camp Funston in Fort Riley, Kansas. Within a week, the number of cases had increased by five times.

In April 1918, a weekly public health report makes the first mention of the disease and mentions 18 severe cases and three deaths in Haskell, Kansas.

In May, hundreds of soldiers began to travel across the Atlantic as they went to war, likely causing the worldwide spread of the virus.

A second wave of the virus struck in the fall of 1918, adding Nebraska to the list of states battling the infection. Red Cloud reported the first two deaths on Oct. 2, and the first case in Omaha was announced the next day.

On Oct. 7, the state ordered all “schools, churches, places of entertainment or public congregation, pool halls and other places of amusement,” be closed.

Residents had to follow quarantine rules, including one stating that any resident who had contact with a diseased person would need to stay home until the quarantine was lifted. Necessities for those who were quarantined were left outside their door.

Only doctors and nurses were permitted to enter and leave quarantined homes, and there weren’t many medical professionals in rural Nebraska.

According to an issue of the Star-Herald published on Oct. 11, 1918, business transactions were to be quick, and buyers were expected to leave the store and return to open air as quickly as possible.

Much like what is happening today with the COVID-19 pandemic, Scottsbluff and Gering had essentially shut down prior to Scottsbluff’s first reported case on Oct. 15, 1918.

Within a few days, the Star-Herald reported five deaths caused by the virus, and it began to spread rapidly.

On Oct. 22, the Star-Herald featured one of several ominous headlines that were published during the pandemic: “Angel of death visits many Scottsbluff homes: epidemic of influence and consequent pneumonia responsible for saddening of city.”

In the beginning of the pandemic, the Gering Courier focused on it’s society section, choosing not to say anything about the virus.

By Oct. 18, seven people in Scotts Bluff County had died. Upward of 70 cases had been reported in Scottsbluff, and with between 25-30 in Gering and by the end of the month, the Courier had to acknowledge the virus. Four more people died between Oct. 23-24 in Scottsbluff.

Efforts were made to close down Scottsbluff’s business district, and more than 30 local business owners signed a petition to stop the closure. Instead, they suggested, a more strict quarantine should be put in place.

The city council agreed to allow the businesses to stay open, as long as they agreed to move transactions along as quickly as possible.

Illness on the rise

As the number of sick and dying grew, the energy of the women who’d been taking care of patients began to dwindle. It is believed that between 15-18 women were responsible for caring for all of Scotts Bluff County’s flu cases.

On Nov. 1, the Star-Herald published a plea on the front page asking people to volunteer for the Red Cross and become nurses. Along with the plea, the newspaper published something else: More than 1,200 cases were reported in the county, with 256 of them occurring in the week before publication. There had been at least 14 deaths.

By Nov. 5, more than 100 new cases were being reported daily. Churches became makeshift clinics and the Red Cross created another hospital.

So many people were dying that local newspapers had to limit obituary sizes, saving large spaces for the citizens with stature in the community, including Clark Robinson who was the superintendent of schools in Mitchell.

According to the Nov. 5 edition of the Star-Herald, citizens in the county requested more stringent quarantines. That paper also included the announcement of nine new deaths and the creation of a make-shift hospital in Gering.

Even in the height of the virus’ spread, media outlets had different takes on the illness. According to a doctoral thesis published in 2014 by University of Nebraska student Kristin Watkins, headlines from the Courier and Star-Herald carried very different tones.

On Nov. 15, the Courier’s headline read: “Quarantine not to be lifted as yet.” The Star-Herald was a little more grim, with the headline over its coverage stating, “Death continues its grim harvest.”

When that edition published, there had been nine new deaths in Scottsbluff and three in Gering. The spread of the disease was beginning to slow for Panhandle residents, but the tragedies continued rolling in.

Among the news coverage was the stories of a family who lost two sons in one day. Another family lost two daughters.

The two local newspapers seemed to trade stances on the virus, with the Dec. 6 Courier running a headline that said, “Grim Reaper is harvesting many.” The Star-Herald’s headline that day was “Flu situation greatly improved.”

The Grim Reaper wasn’t the only visitor to Gering — Santa showed up too, and then went to jail.

According to History Nebraska, Santa arrived in the valley via Union Pacific Train on Dec. 2. Davidson’s, a local store, had advertised the visit for weeks.

As Santa got off the train, he was swarmed by children. Unfortunately, that was against the public gathering rules which had been put in place.

The chief of police approached Santa on his way to the store, placing him under arrest about half a block away from his destination.

He was stripped of his mask and beard, revealing to the children that he was not, in fact, Santa Claus. According to a Courier article on Dec. 6, 1918, the children quickly came together and began taking up a collection to pay Father Christmas’ fine.

The Valley finally began to get relief from the virus in mid-December. Scottsbluff’s city physician reached out to state officials asking to lift the ban on business operations, according to a Star-Herald article on Dec. 10.

The physician was instructed to wait a week, so the state health directors could make a decision. Local business owners lasted two more days before forcing health officials to repeal the ban on public gatherings.

Fewer cases were reported daily and obituaries no longer filled the pages of local newspapers.

State health officials recommended reenacting the ban, but local citizens didn’t see the point, according to a Courier article published on Dec. 20.

Part of the ban was still in place in Scotts Bluff County, requiring people who were sick or exposed to remain quarantined. Anyone who violated the quarantine rules would be fined $100 and/or 30 days in jail. According to the Bureau of Labor Statistics, that $100 fine would be more than $1,550 today if it was adjusted for inflation.

On Dec. 31, the Star-Herald would publish it’s last edition for the year. The paper included a large advertisement placed by the local Japanese community, expressing how grateful they were for the Red Cross and local citizens for caring for them.

By the time the spread of Spanish Flu began to slow down in 1919, more than 500 million people around the world became infected. About 10 percent of them — 50 million — died from the disease, making it the deadliest pandemic in history, according to the Centers for Disease Control and Prevention.