Jennifer Schwartz, Westmoor Elementary fifth grade teacher,works on math equations with her student Whitney Arellano after school on Monday, Jan. 13. Schwartz was recently recognized by the Scottsbluff Schools Foundation for her teaching impact. 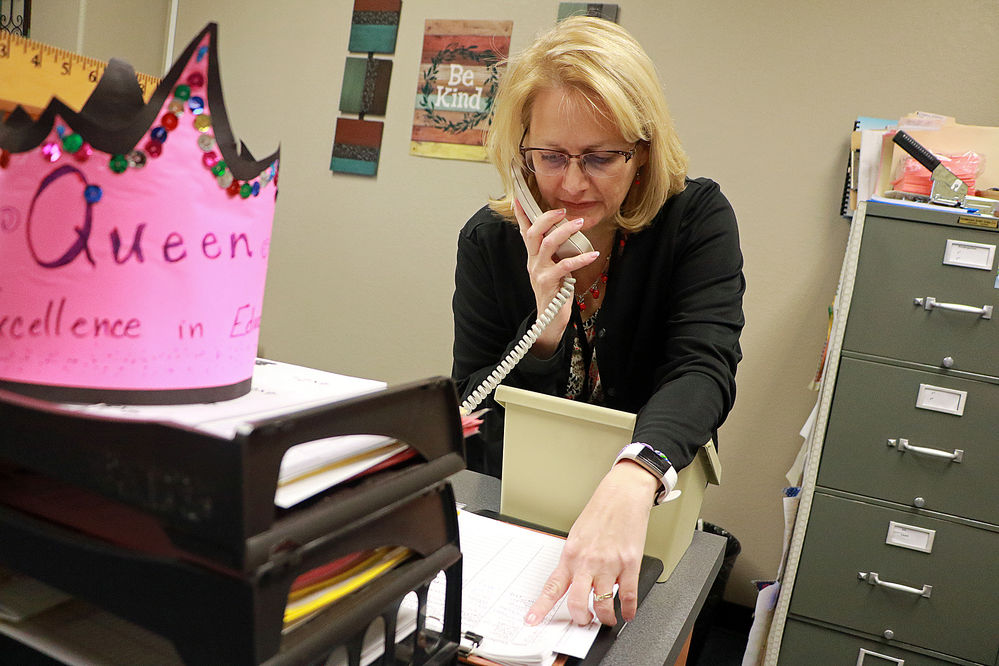 Jennifer Galindo, Lincoln Heights secretary, goes through the end of the day announcements at Lincoln Heights Elementary on Monday, Jan. 13. Galindo was one of four district staff recognized for Excellence in Education. She received a crown following the announcement.

Jennifer Schwartz, Westmoor Elementary fifth grade teacher,works on math equations with her student Whitney Arellano after school on Monday, Jan. 13. Schwartz was recently recognized by the Scottsbluff Schools Foundation for her teaching impact.

Jennifer Galindo, Lincoln Heights secretary, goes through the end of the day announcements at Lincoln Heights Elementary on Monday, Jan. 13. Galindo was one of four district staff recognized for Excellence in Education. She received a crown following the announcement.

On Friday, Jan. 10, four Scottsbluff Public School staff members were honored for their efforts in the new program called “Excellence in Education.”

Alyssa Harvey, with the SBPS Foundation, said the program is another way for them to celebrate success in the district.

“The Excellence in Education recognition provides an opportunity for people to recognize our staff who do more than their job description and go above and beyond to make a positive difference,” Harvey said.

As the program continues, Harvey is hopeful to discover more examples of staff excellence.

“We hope this boosts moral in our district and community and that our staff sees this as a way to celebrate one another,” Harvey said. “So often, these great examples go unnoticed and recognized.”

Jennifer Galindo, school secretary at Lincoln Heights Elementary, was one of the staff members honored. Galindo has worked in the district since 2008 and as she completed her regular morning tasks helping students get to class, her routine was disrupted when Crystal Sandberg came into the office saying principal Kraig Weyrich needed her help urgently.

“I actually thought something was possibly wrong with Mr. Weyrich the way Mrs. Sandberg insisted he needed my help in the gym,” Galindo said. “I thought about bringing the AED with me since the health office staff was out today (Jan. 10) and I only play a nurse on T.V. when they are out. I hurried down there and he does not make eye contact with me. I finally catch him and motion to see if he is OK. He obviously was because he kept talking.”

Realizing he was OK, she returned to her duties of helping late students get into the gym for the morning assembly. In that time, they announced Galindo was being recognized for her excellence in education. Despite missing Weyrich make the announcement, she soon realized why she was called down into the gym.

“I truly did not know I had received the recognition until afterward as I did not hear my name announced,” Galindo said. “There seemed to be some confusion on my part as they waited for me to respond and I just stood there. This is probably a good thing actually, otherwise, I would have cried. I really was speechless for once as I was trying to process and fill in the blanks.”

As the school’s secretary, Galindo said she loves her job that gets better every day.

“I learn something new or different every day and I look for ways to connect to the students and their families,” she said. “In a world that is often heavy and confusing and negative, it is my goal to bring a little sunshine.”

Even though her job requires her to complete several secretarial duties, a picture hanging in the front office helps her stay focused.

“I have a picture in the office that says, ‘They may forget what you said but they will not forget how you made them feel’ by Carl Buechner and I read it every day to remind me that my job is more than just paperwork, scheduling, phones and attendance, but to connect with people and uplift them.”

“I will spend my time making sure that those who thought of me and wrote in to nominate me, receive the best that I have to give along with all those I come in contact with, especially our Lincoln Heights Lions,” she said.

Westmoor fifth grade teacher Jennifer Schwartz was also recognized Friday for her influence in education. After Schwartz learned of her nomination, she became emotional.

“It’s special to be recognized for your efforts and it means a lot that someone took the time to fill out the application,” Schwartz said.

In her 21st year of teaching, Schwartz said she is blessed to be in a profession she loves.

“I love being with kids and spending time in the classroom even on the weekend,” she said. “I’m blessed to find a profession that I feel like I was meant to do.”

While Schwartz does not know who nominated her, she said the nomination will serve as a reminder she is making a difference and doing the right thing even on the most challenging days.

“In education, everybody goes above and beyond,” she said. “I don’t know I’m any more deserving. Although I might have been recognized, the culture and staff has a role to make things work.”

“Alyssa Harvey came to my classroom door and asked if she and the administrators could come in,” Celli said. “I was a little nervous at first because I didn’t know what was going on, but then, when she started reading the wonderful comments that Mr. Griess had sent her, I started to cry.”

Celli has been in education for 17 years and still the profession is rewarding.

“I enjoy working with kids and there are many different outlets through education that let you do that, whether it’s in the classroom as a teacher, coach, and tutor,” she said. “Not only do I get to teach some pretty awesome sixth grade kids, but my colleagues and administrators are amazing as well.”

The four educators received a Bearcats mug and a $50 Target gift card. They will also be recognized on a plaque.

Within the nomination forms, Harvey said Galindo was nominated for spending extra time with students before and after school to help them get ready for their school day and help them with their homework. She also is known to help teachers set up or rearrange their classrooms. Schwartz’s nomination discussed how she goes out of her way to make time for her students and colleagues, often helping students during lunch and plan times so they all get the support they need. Celli was nominated for her outstanding work organizing the BMS Krispy Kreme Fundraiser. According to other BMS staff, Celli worked extra hard to make sure it was “easy” for her colleagues, and the students broke their previous record of sales. Hadenfeldt was recognized for organizing and delivering donations for a student and their family whose home was lost in a fire.

The foundation is still accepting nominations from students, parents, colleagues, former students and staff members for the April recognition. The nomination form, found at https://bit.ly/2NlSLSo, asks for specific and current examples of how the nominee has done something outstanding to make a positive difference.