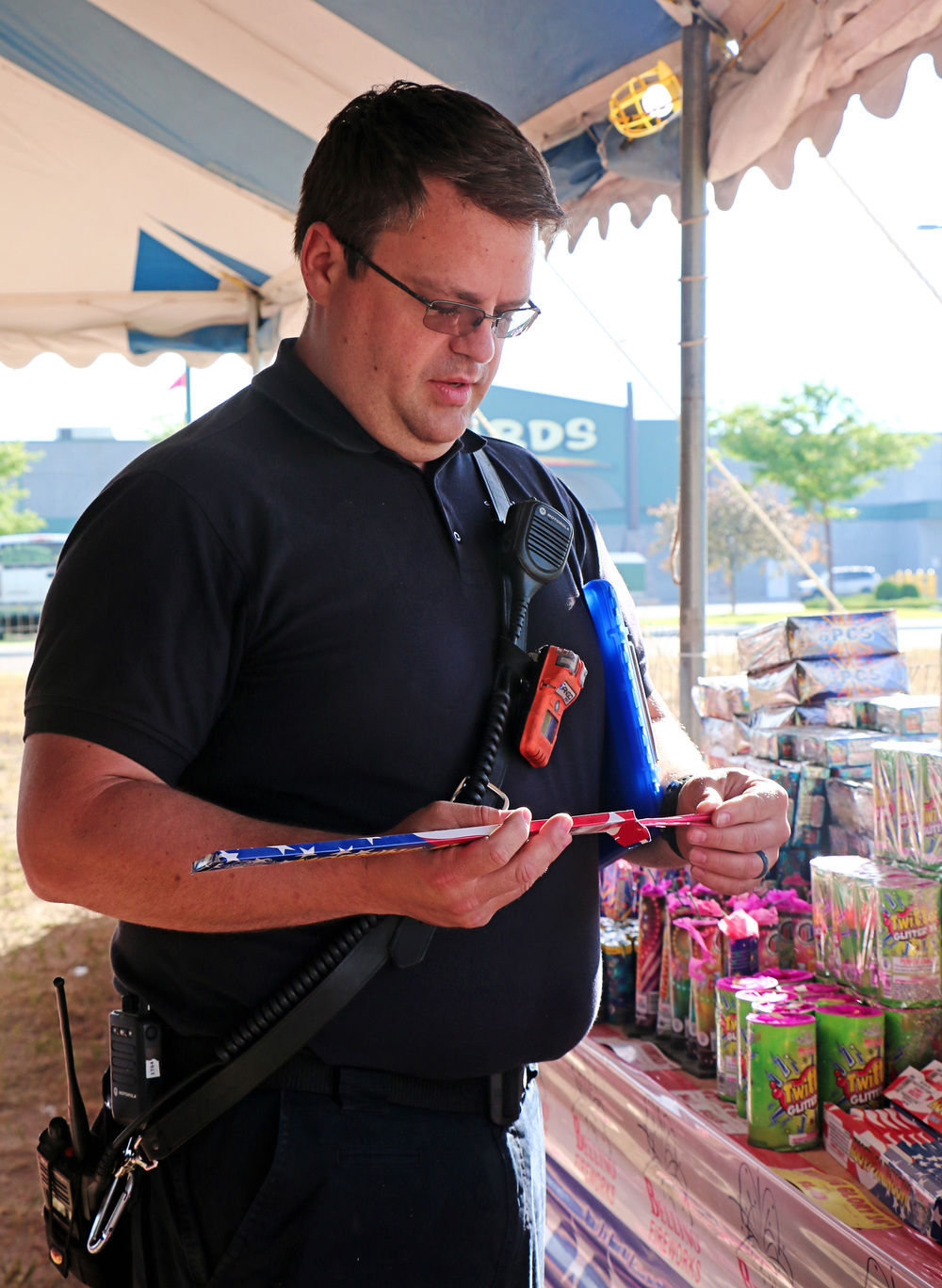 Anthony Murphy, fire marshal with the Scottsbluff Fire Department, checks a box of sparklers at the Turning Point Apostolic Church stand on Thursday. He explained that sparklers are required to be made of bamboo, not metal. Metal sparklers are prohibited in Nebraska. 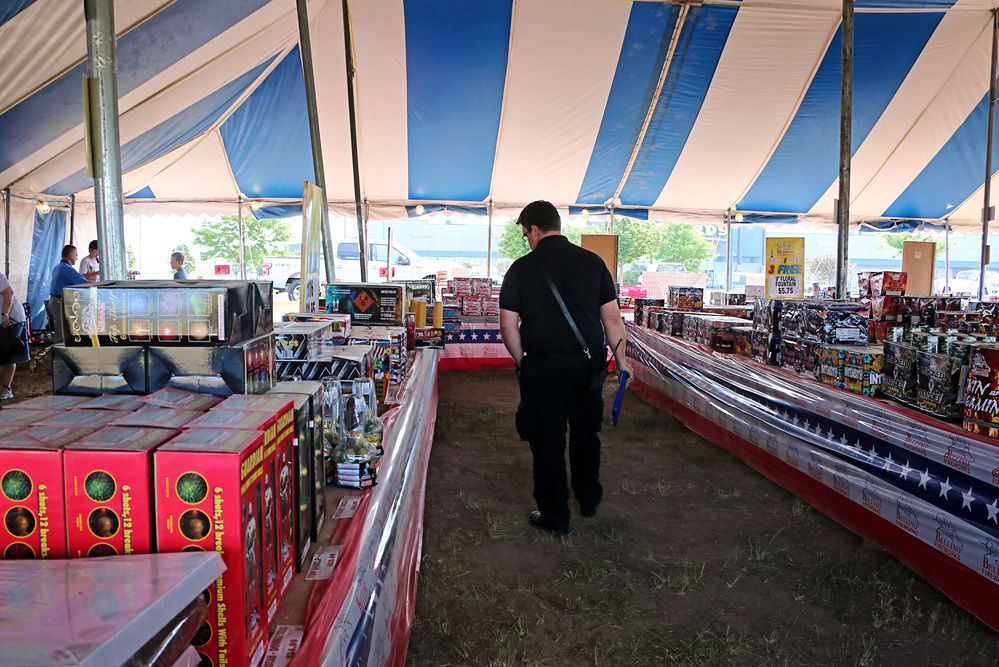 Scottsbluff Fire Marshal Anthony Murphy walks the aisles at the Turning Point Apostolic Church's fireworks stand in Scottsbluff. Evaluating the fireworks is one of the first things he does when he visits a stand. 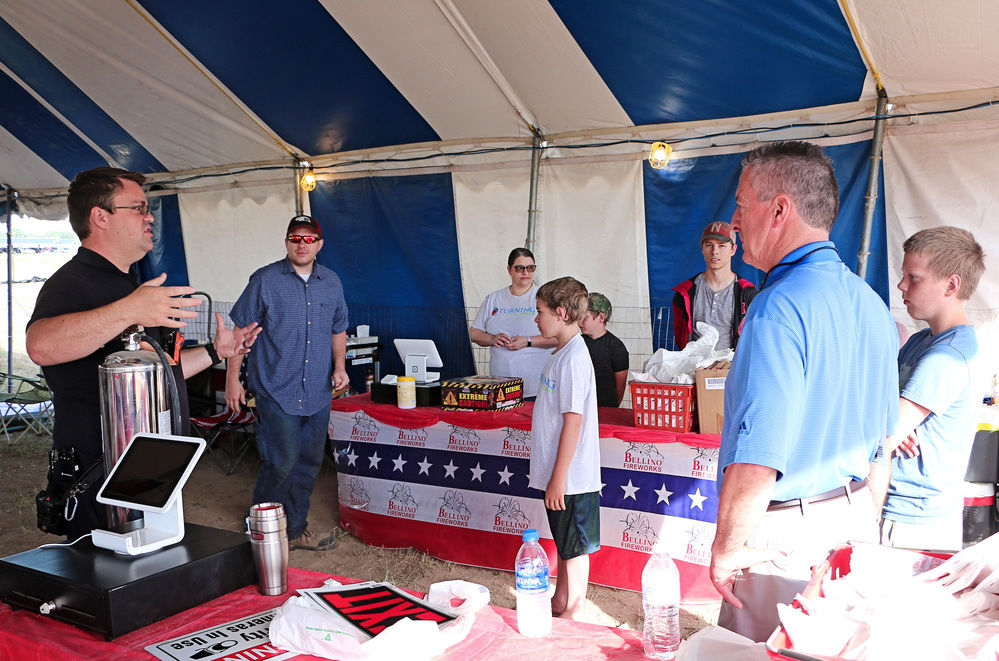 During an inspection at the Turning Point Apostolic Church stand, Scottsbluff Fire Marshal Anthony Murphy gave an impromptu lesson on operating a fire extinguisher to youth who would be helping man the stand. 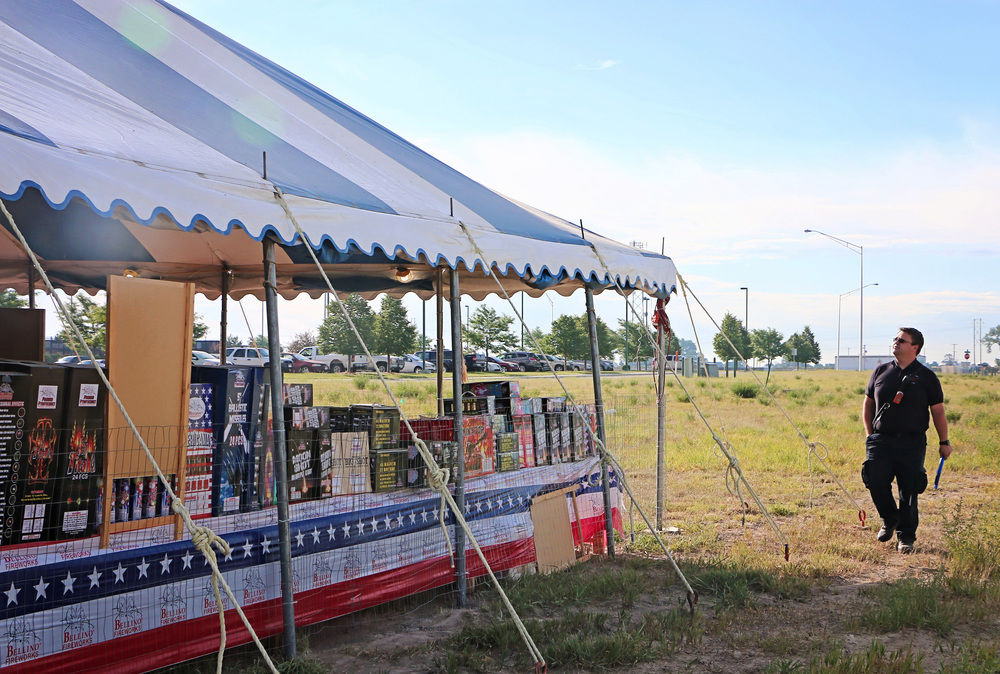 During inspections, Scottsbluff Fire Marshal Anthony Murphy doesn't just evaluate a stand to check for prohibited fireworks. He also looks for safety aspects, such as ensuring vegetation is mowed near and in the stand, lighting and other requirements.

Anthony Murphy, fire marshal with the Scottsbluff Fire Department, checks a box of sparklers at the Turning Point Apostolic Church stand on Thursday. He explained that sparklers are required to be made of bamboo, not metal. Metal sparklers are prohibited in Nebraska.

Scottsbluff Fire Marshal Anthony Murphy walks the aisles at the Turning Point Apostolic Church's fireworks stand in Scottsbluff. Evaluating the fireworks is one of the first things he does when he visits a stand.

During an inspection at the Turning Point Apostolic Church stand, Scottsbluff Fire Marshal Anthony Murphy gave an impromptu lesson on operating a fire extinguisher to youth who would be helping man the stand.

During inspections, Scottsbluff Fire Marshal Anthony Murphy doesn't just evaluate a stand to check for prohibited fireworks. He also looks for safety aspects, such as ensuring vegetation is mowed near and in the stand, lighting and other requirements.

Fireworks sales began in Nebraska on Thursday and will continue until July 4. Before each of the Scottsbluff fireworks stands opens, Scottsbluff Fire Marshal Anthony Murphy stops by each of them, conducting required inspections. On Thursday morning, he toured each of the stands set up in Scottsbluff before they opened to begin the ten days of sales.

One of the first things he does when he visits a stand is walk through the aisles, looking at the fireworks.

“The packaging has been interesting,” he said. “Overall, a lot of the companies do the same thing, but they invest a lot in their packaging.“

With Nebraska being close to other states, such as Wyoming, there can be confusion about fireworks that aren’t allowed, such as bottle rockets.

“We have had in previous years — I have not come across it this year — stands that were new to this area and weren’t aware of the Nebraska laws. Some of them have had large amounts of fireworks that weren’t allowed here. We try to work with them (operators) and give them an opportunity to remove them from the shelves.”

When discovering prohibited fireworks, he said, it is most often due to a vendor error and vendors will give stand operators refunds on the product. He does check back to ensure that the fireworks are removed from sale and can confiscate fireworks, if needed. Confiscated fireworks are detonated by the Explosive Ordnance Device team.

“We try to work with the stands, not against them,” he said. “It would seem unfair to expect immediate compliance. Every little thing that we do, it’s about safety.”

As he visits one stand, a fundraising stand set up by the Turning Point Apostolic Church near Menard’s, he opens a box of sparklers, a favorite for little children. In Nebraska, sparklers now have to be made of bamboo, not metal. The sparklers he examines are safe, and Anthony explains why metal sparklers are prohibited.

“They (metal sparklers) retain heat so much that if they get thrown down, they will start a fire.”

The metal sparklers have also been tied to injuries of children, including severe burns.

Another favorite is parachutes, which Murphy makes a point of checking during his visit as Nebraska doesn’t allow nighttime parachutes.

“The parachutes can come down hot and start a fire, and no one sees it,” he said.

Murphy, who has been a firefighter for 14 years and doing inspections for five years, isn’t just checking for prohibited fireworks. As he walked two stands early Thursday morning, he took notice of where the exits where, with three required and adequate signage so that people could find them.

He also checks that the stands have the required amount of fire extinguishers, and even gives an impromptu lesson to youth helping to man the Turning Point fireworks stand.

“Remember the acronym P.A.S.S.,” he tells the young men who gather and watch him demonstrate pulling the pin, aiming at the base of the fire, squeezing the lever of the extinguisher and sweeping it side to side. He also explains the difference between fire extinguishers at the stand, noting that one of them can’t be used on electrical fires, such as a cord fire.

Scottsbluff Fire Department has experienced at least one fire at a fireworks stand during Murphy’s time on the department. He said the department is careful to ensure safety aspects, such as making sure high grasses are mowed away from tents, no smoking signs are posted and other aspects to reduce fire hazards are checked. Aisle widths and other parameters are also checked, with companies often submitting set up plans in advance.

“Standard companies for fundraisers often submit the plans and give them (operators) an idea of where to put signs and other supplies,” he said. “It can take a lot of the guesswork out of it.”

Larger tents have to have emergency lighting and Murphy even stopped to test the switches on lighting as he surveyed the Finders’ Keepers stand set up on Avenue I.

Consumer fireworks have been banned in Goshen County this year, due to warm temperatures, effective on June 29, so Murphy reminded fireworks stand operators that transportation of fireworks across state lines are prohibited. Goshen County authorities are encouraging people to attend the public display that is put on by the fire department. The Star-Herald will provide a list of are public displays in an upcoming edition. Email news@starherald.com to make sure that your display is listed.

Local residents are also reminded that they can’t transport fireworks across statelines for use locally. Murphy said that he and other officials will be working over the 10-day period to monitor fireworks activity locally.

— Never allow young children to play with or ignite fireworks.

— Avoid buying fireworks that are packaged in brown paper because this is often a sign that the fireworks were made for professional displays and that they could pose a danger to consumers.

— Always have an adult supervise fireworks activities. Parents don’t realize that young children can suffer injuries from fireworks, such as sparklers.

— Never place any part of your body directly over a fireworks device when lighting the fuse. Back up to a safe distance immediately after lighting fireworks.

— Never try to re-light or pick up fireworks that have not ignited fully.

— Never point or throw fireworks at another person.

— Keep a bucket of water or a garden hose handy in case of fire or other mishap.

— Light fireworks one at a time, then move back quickly.

— Never carry fireworks in a pocket or shoot them off in metal or glass containers.

— After fireworks complete their burning, douse the spent device with plenty of water from a bucket or hose before discarding it to prevent a trash fire.

— Make sure fireworks are legal in your area before buying or using them.

What's 'hot' in fireworks this year? There is something for everyone

Firework stands and stores filled with bright colors and shelves full of big explosions are a staple of 4th of July celebrations, and firework…

Scottsbluff looking at potential projects as it needs to spend $3.45 million

LOOKING BACK: Minatare loses a publisher