Olivia Longmore, right, stands with her friends, who participated in the CBYX program, as they wait at the Frankfurt Airport to return to America. The trip was cut short due to the coronavirus. 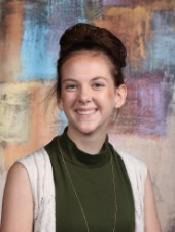 As the impact of the coronavirus spread across the globe, Olivia Longmore, a Gering High School junior had her trip to Germany cut short.

Longmore was selected to travel abroad to Germany as a foreign exchange student from August 2019 to June 2020, but the program was ended early.

“Unfortunately, my CBYK program made the decision to cut this year’s program short due to the COVID-19 virus,” Longmore said. “I received this notification at 4 p.m. on Thursday, March 14 that I would need to pack up, say goodbye and be in Frankfurt for my departure on the following day.”

With about 24 hours to pack and say goodbye to her friends, Longmore said it was tough to leave her German family and friends and other American CBYK friends.

“The next 48 hours were very stressful and emotional,” she said. “Leaving the country, friends, and family is hard enough, let alone during a national emergency.”

Since arriving in Germany seven months prior, Longmore created a family away from home and wanted to say goodbye to more people than she had time to before boarding an airplane. The people had welcomed her into their homes and she wanted to prepare goodbye notes, but she did not have enough time.

As she said her final goodbyes to her second family and new friends, she said, “They were all so lovely and managed to surprise me with small cards and last-minute presents, which really touched my heart.”

Her final hours in Germany were spent with people going through the same process she was to return home in the midst of a national pandemic.

After her host family drove her to Frankfurt to meet the other CBYK members, they headed to the airport where there were lines of people waiting to board international flights before the travel bans no longer allowed people to leave. Navigating through the crowds, Longmore said people wore masks and latex gloves for protection.

Once she landed in the United States, she went through a mandatory health screening and was advised to self quarantine for the next two weeks. Some people had to take their temperature and were given masks and gloves to wear while in the airport and on following flights. The process was lengthy, extending the time to get back to Gering.

“We were given explanatory information and advised to go into self quarantine for the next two weeks, so as not to unknowingly spread the virus,” she said. “This process as well as going through customs took about three hours, which meant most of us had to rebook domestic flights.”

Longmore is currently in self quarantine with her father, where she cannot leave her house nor stand within 6 feet of anyone other than him. They are required to take their temperatures twice a day and monitor their health. During the two-week period, Longmore said it has been a challenge to communicate with her other family members.

“It was devastating not being able to hug my mom and other family members after seven months without them and directly after such a traumatic emotional event,” Longmore said. “It’s heartbreaking to only talk to my family through windows and closed doors, but I am most worried about the spread of this disease to those who might not be able to withstand it.”

While practicing social distancing, Longmore said her family has made the process more bearable and fun.

“I’m not allowed to go onto the porch area, which gives them free rein,” she said. “We are able to speak through the closed window and even, after I angle the television, watch movies together.”

Her family also uses a scoop for passing where they can transfer food and other presents to each other.

Some of her close friends also came to visit, which Longmore said was a highlight of the last few days.

Despite the unforeseen pandemic that ended her adventure in Germany early, Longmore is grateful for the opportunity.

“I’m so very grateful that I was able to have this exchange year in Germany, even if it did end abruptly.”