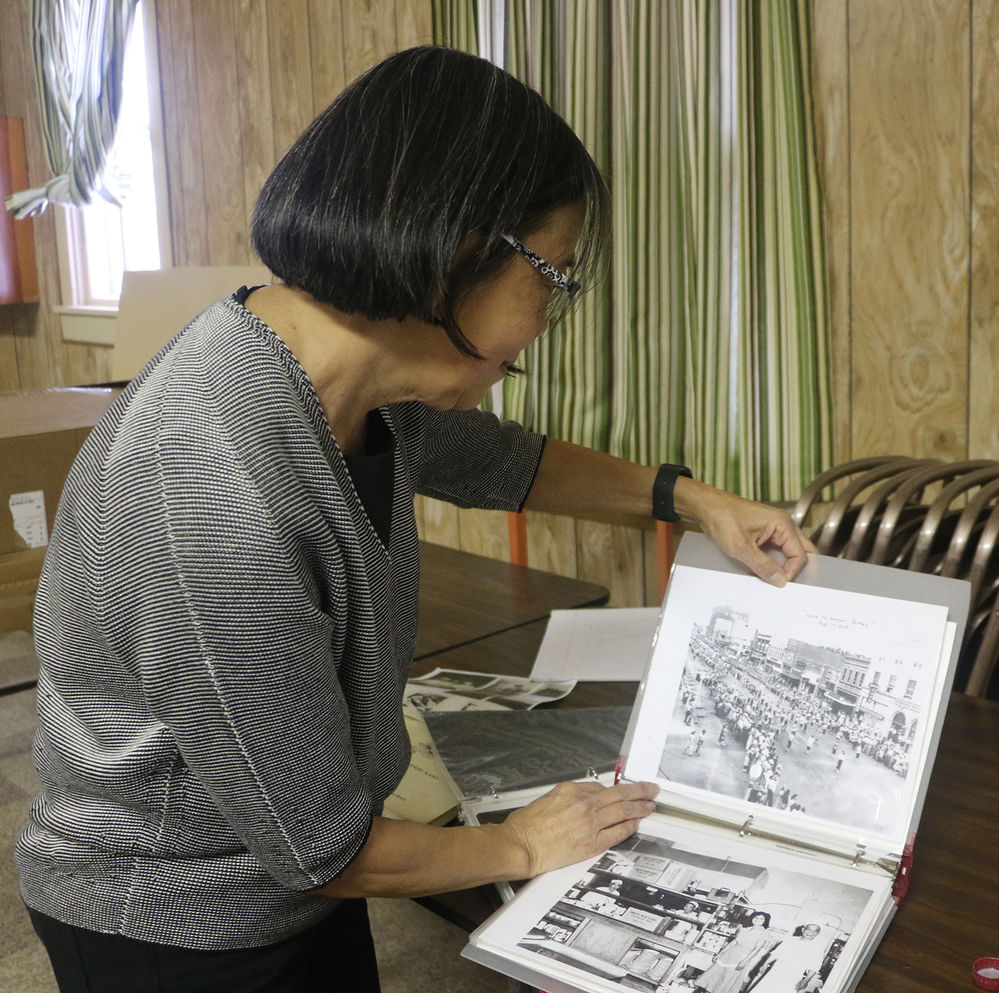 Vickie Sakurada Schaepler flips through a scrapbook with pictures of the history of Japanese-Americans in Scottsbluff. 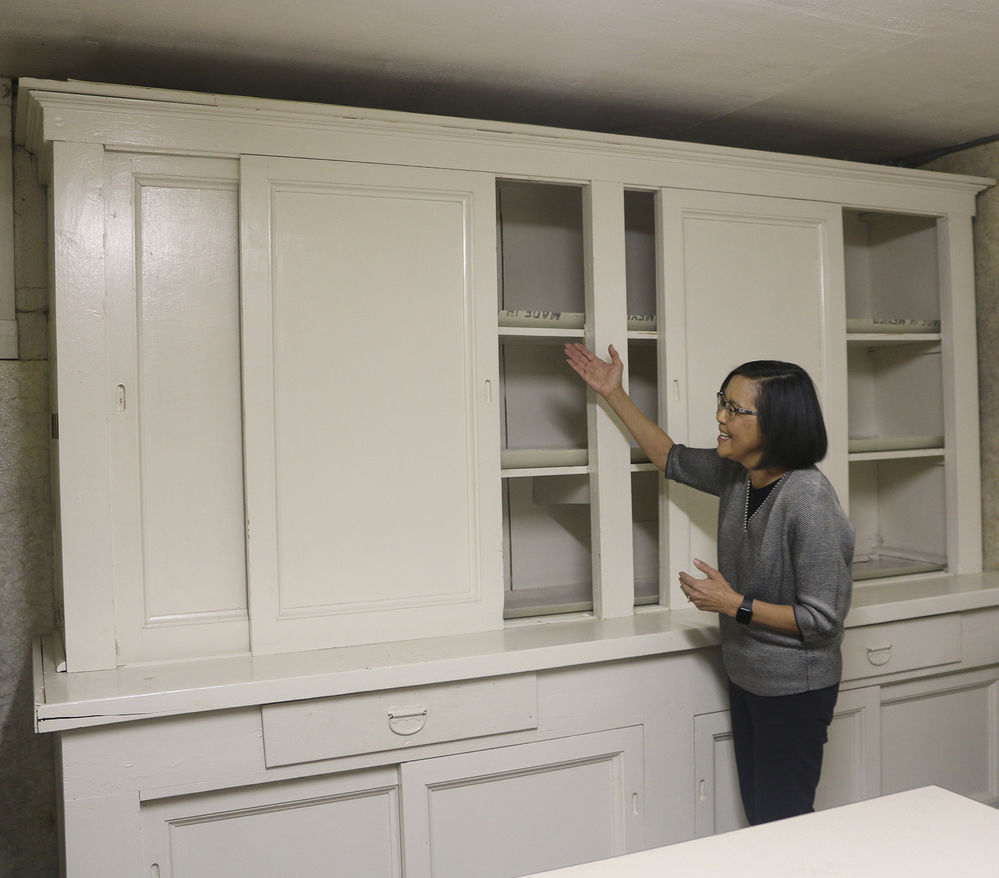 Vickie Sakurada Schaepler shows the well-preserved nature of the cabinets in the basement of the Japanese Hall in Scottsbluff. It has yet to be determine whether they were built into the building or not, but she hopes they can be saved and moved with the rest of the building to the Legacy of the Plains Museum.

Vickie Sakurada Schaepler flips through a scrapbook with pictures of the history of Japanese-Americans in Scottsbluff.

Vickie Sakurada Schaepler shows the well-preserved nature of the cabinets in the basement of the Japanese Hall in Scottsbluff. It has yet to be determine whether they were built into the building or not, but she hopes they can be saved and moved with the rest of the building to the Legacy of the Plains Museum.

SCOTTSBLUFF — A small, white building on 17th Street holds the history and stories of generations of local Japanese-Americans. The Japanese Hall at 1705 Ave. C is home to these memories in the valley. Vickie Sakurada Schaepler, a Sansei, or third-generation Japanese, is working to not only preserve the history, but the very building in which so many memories were made.

Many first-generation Japanese immigrants, or Issei, were young men and teenagers when they came to the U.S. through Seattle and Portland before traveling east on the Union Pacific railroad. In 1910, many of them settled in the area. The railroad was laying off workers and western Nebraska was having a boon crop of sugar beets.

The Issei and the Nisei, the second generation, worked as farm hands, started their own farms and owned restaurants in town. The Japanese Hall was built in 1928 as a place to meet and share their culture. The preservation of the Japanese Hall will expose younger generations to their history.

Schaepler, the Japanese Hall and history project coordinator at the Legacy of the Plains Museum, has already worked to move pictures, trunks and other items to the museum for preservation until the building itself is moved later this year.

One important artifact in safe keeping at the museum are theater curtains, one of which shows the Eagle Cafe as a sponsor.

“My parents eventually owned the Eagle Cafe,” she said. “I’m just thrilled we have it.”

The preservation of the hall and its history is important not just to Schaepler, but to those who are only now beginning to learn about Issei and Nisei and their tragedies and triumphs. Growing up, Schaepler did not know about the concentration camps in which many Japanese-Americans were held during World War II. She still struggles to say the words “concentration camp.” Her voice wavers for a moment before she explains that, in high school, someone asked her what she thought about the camps.

“I didn’t know anything about it,” she said. “I asked my dad and he said, ‘Things happened during the war that we don’t discuss and we won’t discuss it.’”

For Schaepler and the generations that have followed, they knew little of their history because it was purposely not spoken of.

“I think they didn’t want us to have any feelings of anger about the war,” she said. “They just wanted us to live.”

Shaepler flips through scrapbooks of memories of the Japanese Hall. Though the building is being emptied in preparation for its move, the cherished stories unfold in the scrapbook with each turn of the page. She joyously tells stories and explains roadblocks to information.

Her father, and others like him, never shared their stories and she wants to save them before they disappear. Her parents were some of the first Issei to pass away in her family. Documenting their history and all the Issei is vital to understanding them.

Schaepler was recently selected as a member of the Japanese American Leadership Delegation (JALD) Program and will soon travel to Japan. She was chosen because of her longtime commitment to tell the Japanese-American story in Nebraska.

“She believes that the history of Japanese-Americans in Nebraska is a part of a larger story of diversity in America,” said Shiori Okazaki, director of communications at the U.S.-Japan Council. “The JALD Program represents a diverse group of Japanese-Americans who come from a broad range of professions and from all parts of the United States.”

Schaepler said she was chosen in part because of the warm welcome Naoki Ito, the consulate-general of Japan, received when he visited in 2018. Schaepler was overwhelmed by the support from the community.

“Part of the reason I ended up in this delegation is because of the community and their continued support, “Schaepler said. “They have always been here to support us.”

When the building is moved, and pictures rehung, the stories will be told once again. People will hear the story of Sam Takei, who worked at the Eagle Cafe and always wore a bow tie and a smile. People will learn about the harrowing stories of many families who were relocated to Gila River War Relocation Center.

“Gila River was so desolate there wasn’t even a fence,” she said. “If you escaped, you would probably die in the desert.”

They will also hear about the good times in Scottsbluff where the Japanese hand-dug the basement to the hall and where Japanese-Americans always found support.

The basement will have to be recreated in its new home. Several of its items will be moved, but there is a question about a kitchen cabinet.

“We’re not sure if they were built,” she said. “It would be nice if we can take it out without destroying it.”

If you would like to donate to the ongoing maintenance of the building, contact the Legacy of the Plains Museum at japanesehall@legacyoftheplains.org or 308-436-1989.