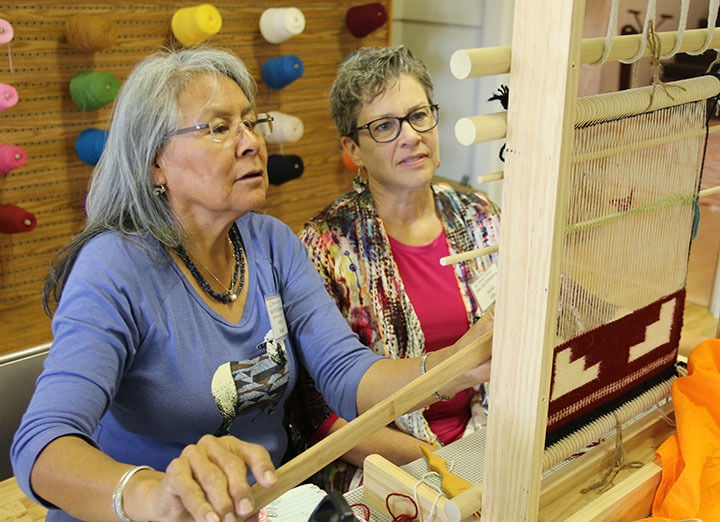 Navajo native Ilene Naegle (left) has been teaching a class in traditional Navajo weaving at Brown Sheep Company. She demonstrated some of the skills for Sarah Ellis, who lives in Michigan. Sarah and Ilene had met earlier while attending a fiber arts class in Pennsylvania. 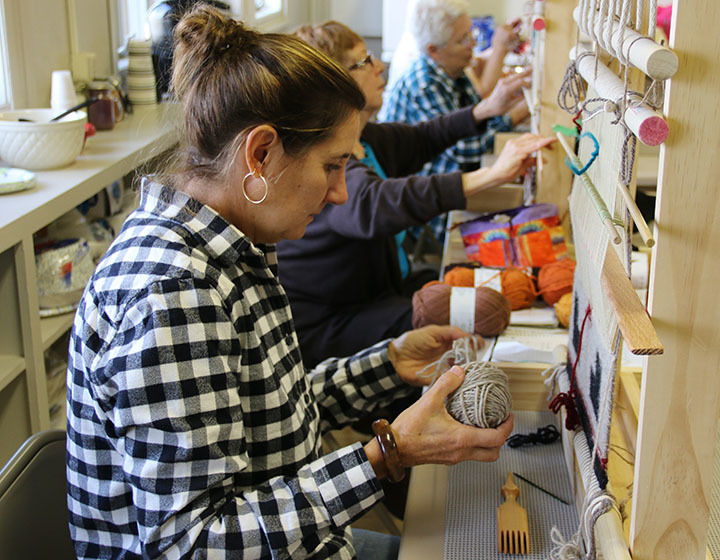 Laura Callahan considers different colors for her Navajo weaving project. Living in Connecticut, she learned about the weaving class from the Brown Sheep Company website and signed up right away. Laura said she enjoys the thought process that goes into creating a work of art.

Navajo native Ilene Naegle (left) has been teaching a class in traditional Navajo weaving at Brown Sheep Company. She demonstrated some of the skills for Sarah Ellis, who lives in Michigan. Sarah and Ilene had met earlier while attending a fiber arts class in Pennsylvania.

Laura Callahan considers different colors for her Navajo weaving project. Living in Connecticut, she learned about the weaving class from the Brown Sheep Company website and signed up right away. Laura said she enjoys the thought process that goes into creating a work of art.

MITCHELL — A group of women from across the country have been meeting in the Brown Sheep Company classroom in the old Haig School this week to learn the centuries-old art of traditional Navajo weaving.

They come from as far away as Michigan, New Mexico, and even Connecticut.

Ilene Naegle, a native Navajo from Ganado, Arizona, has been teaching weaving classes since 2003 at Dine’ Community College, with several branches in northern Arizona and New Mexico. 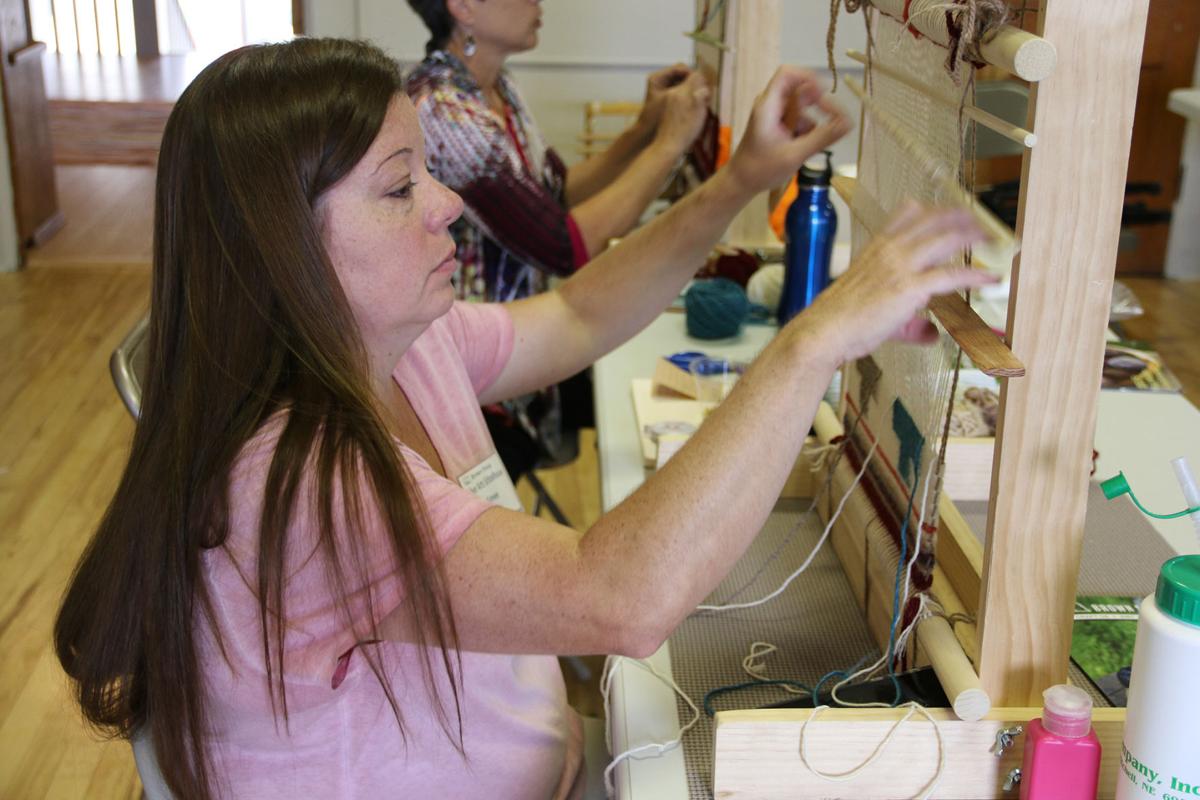 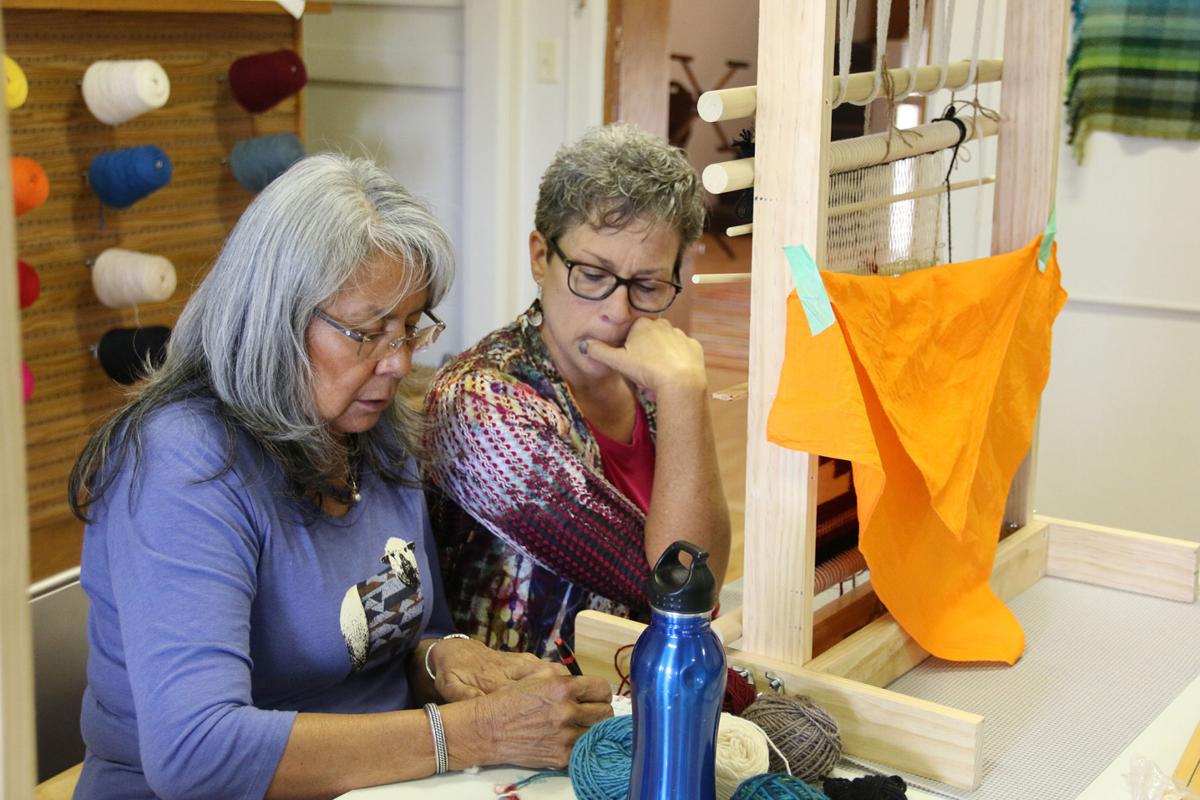 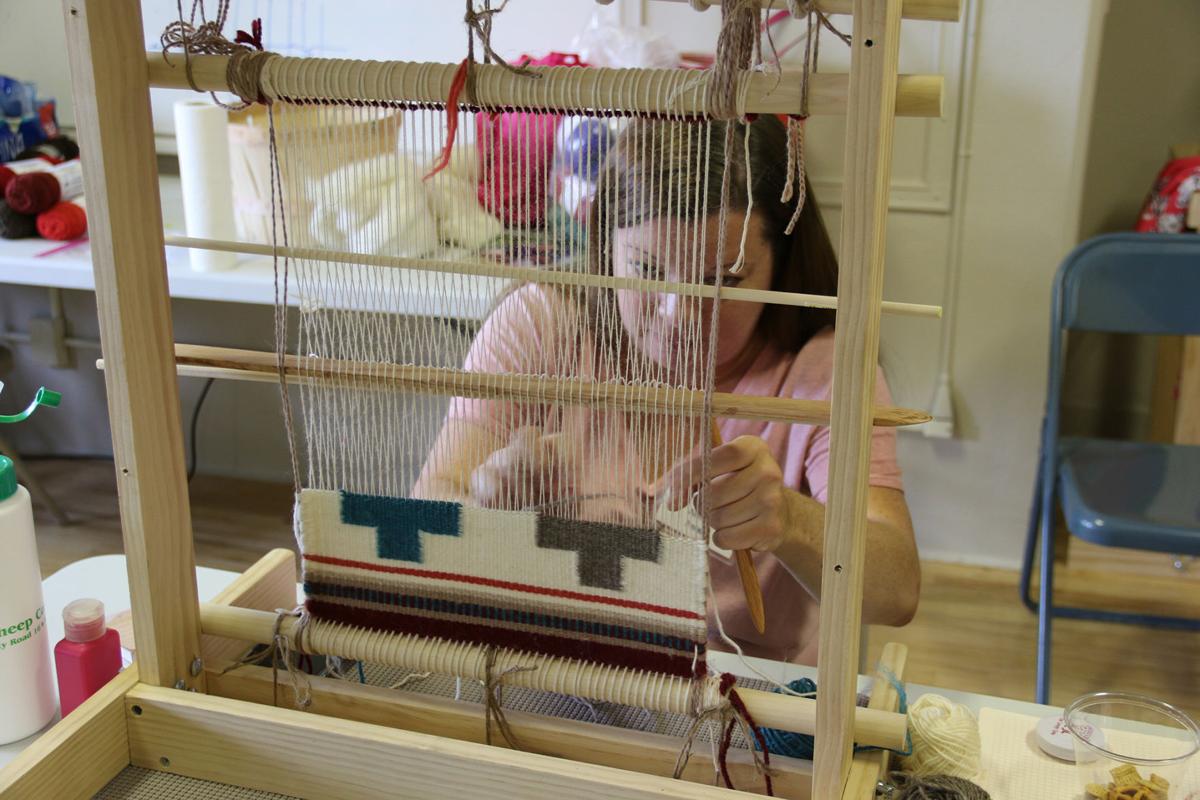 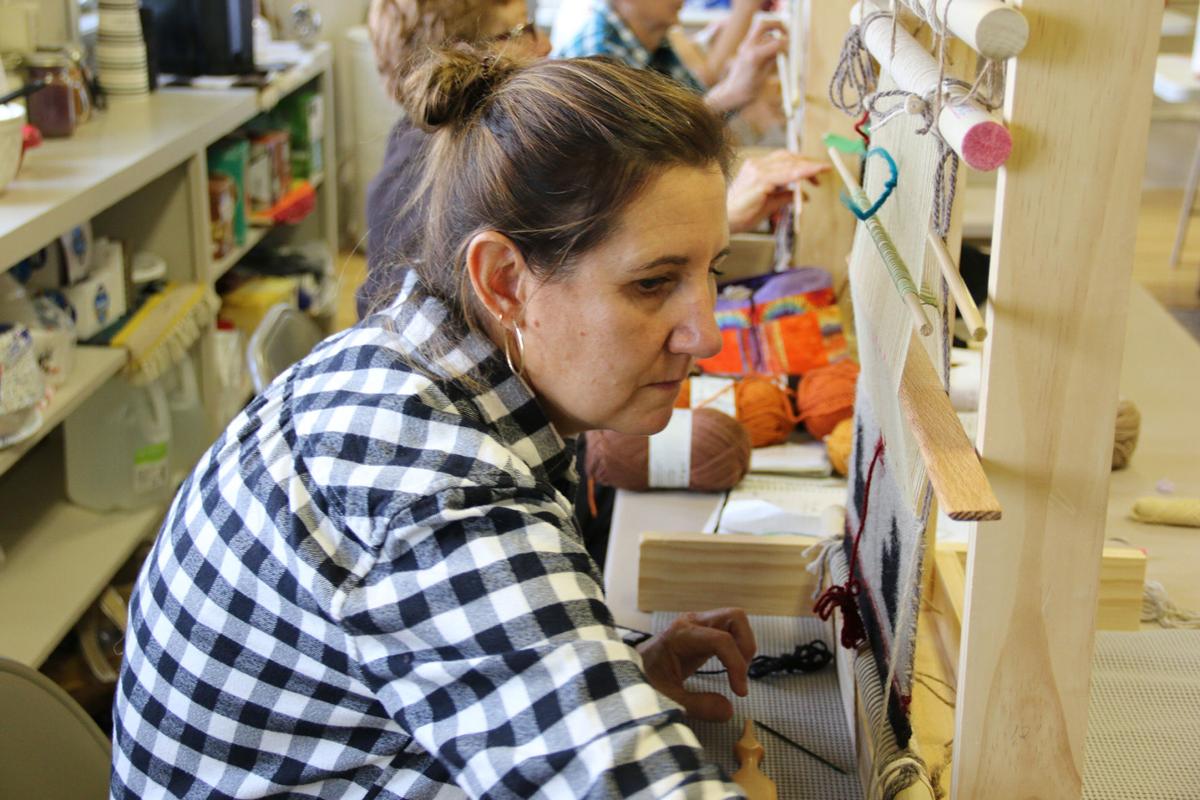 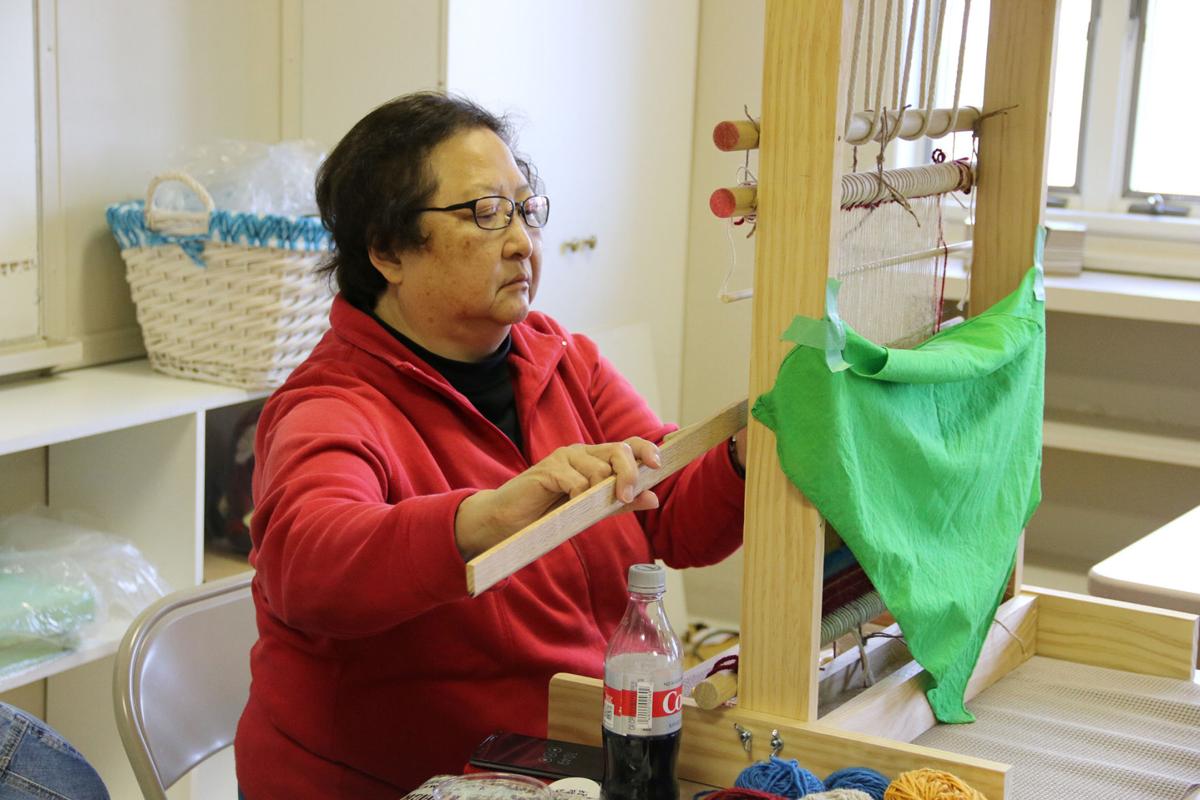 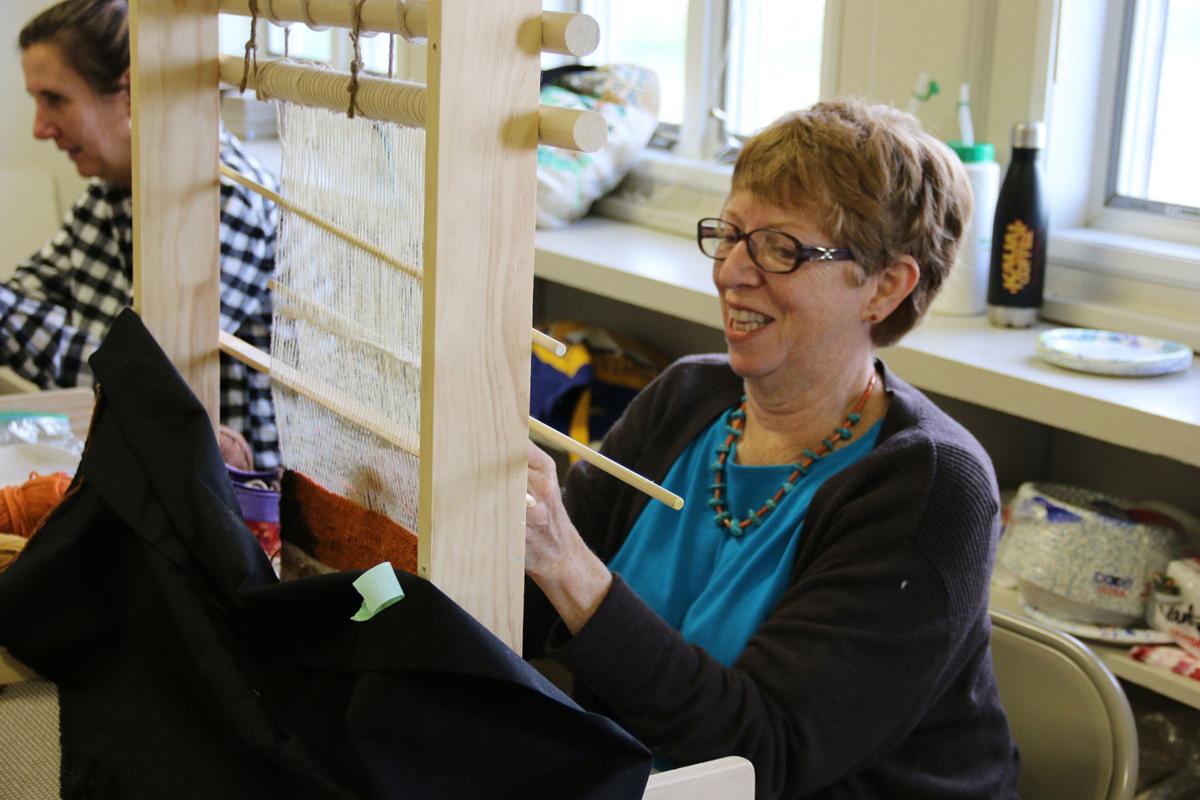 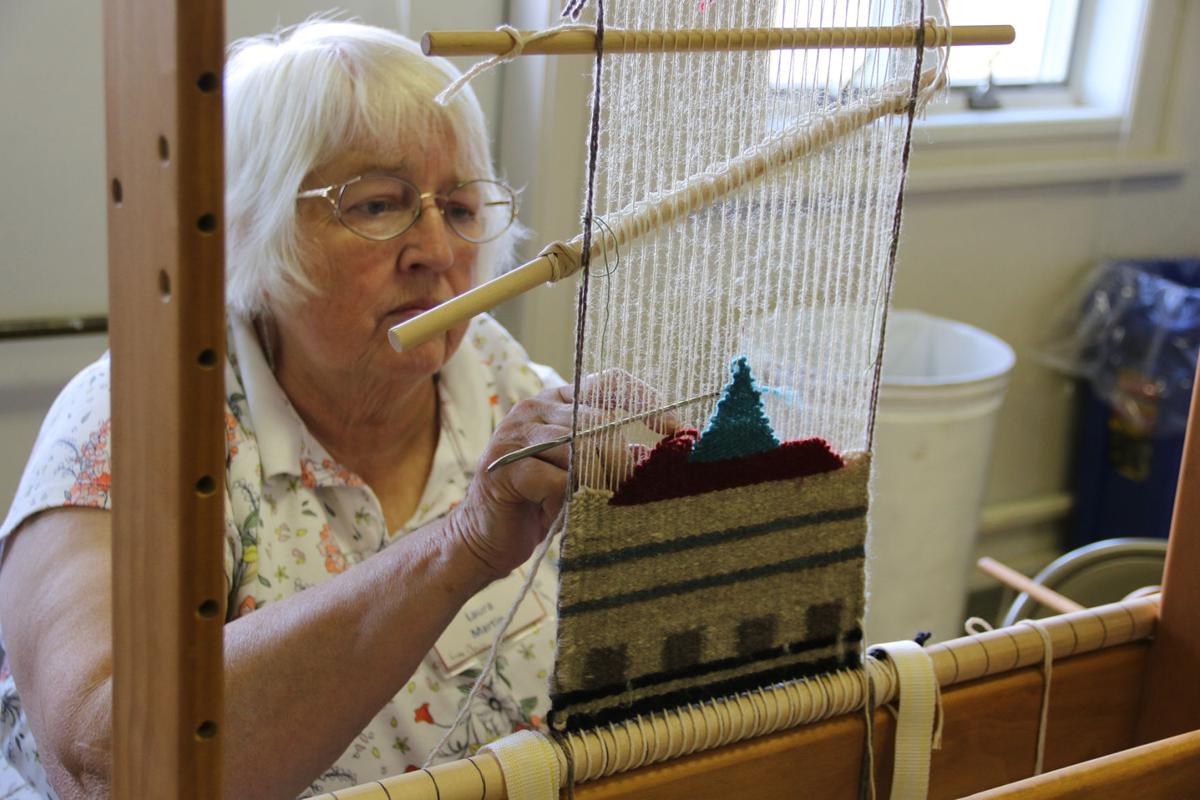 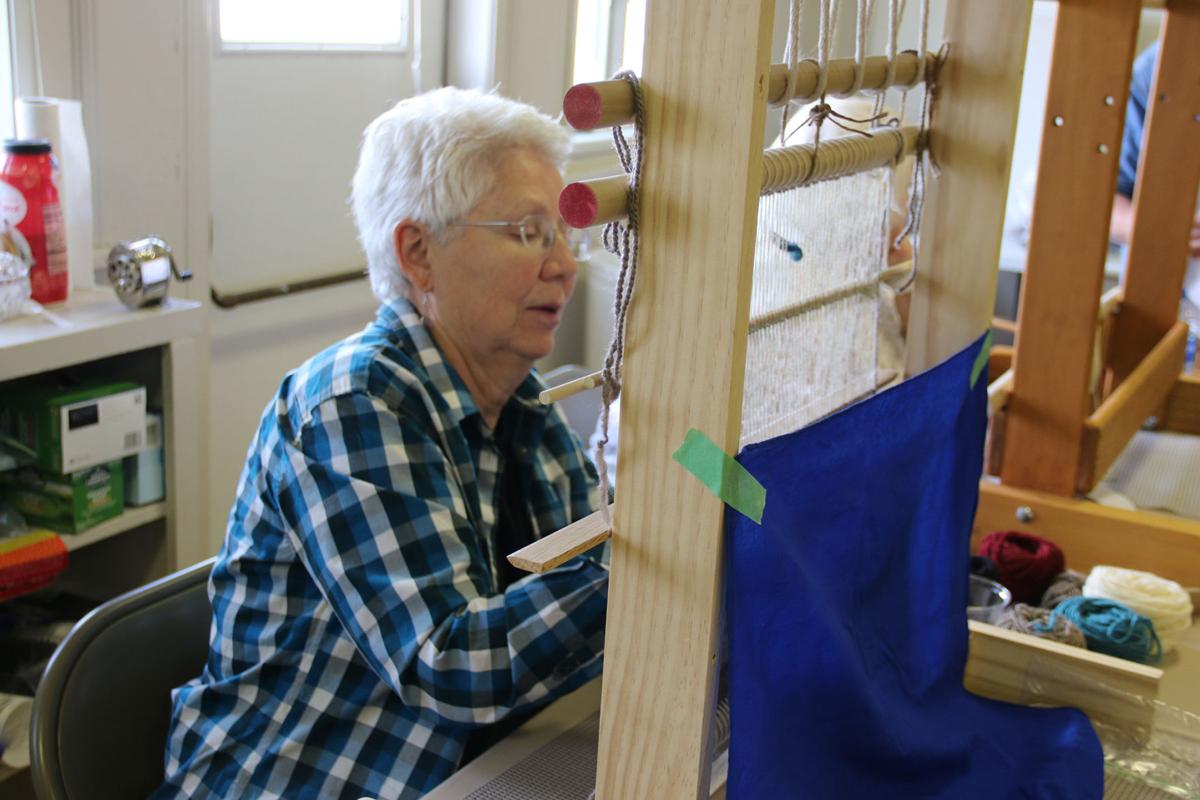 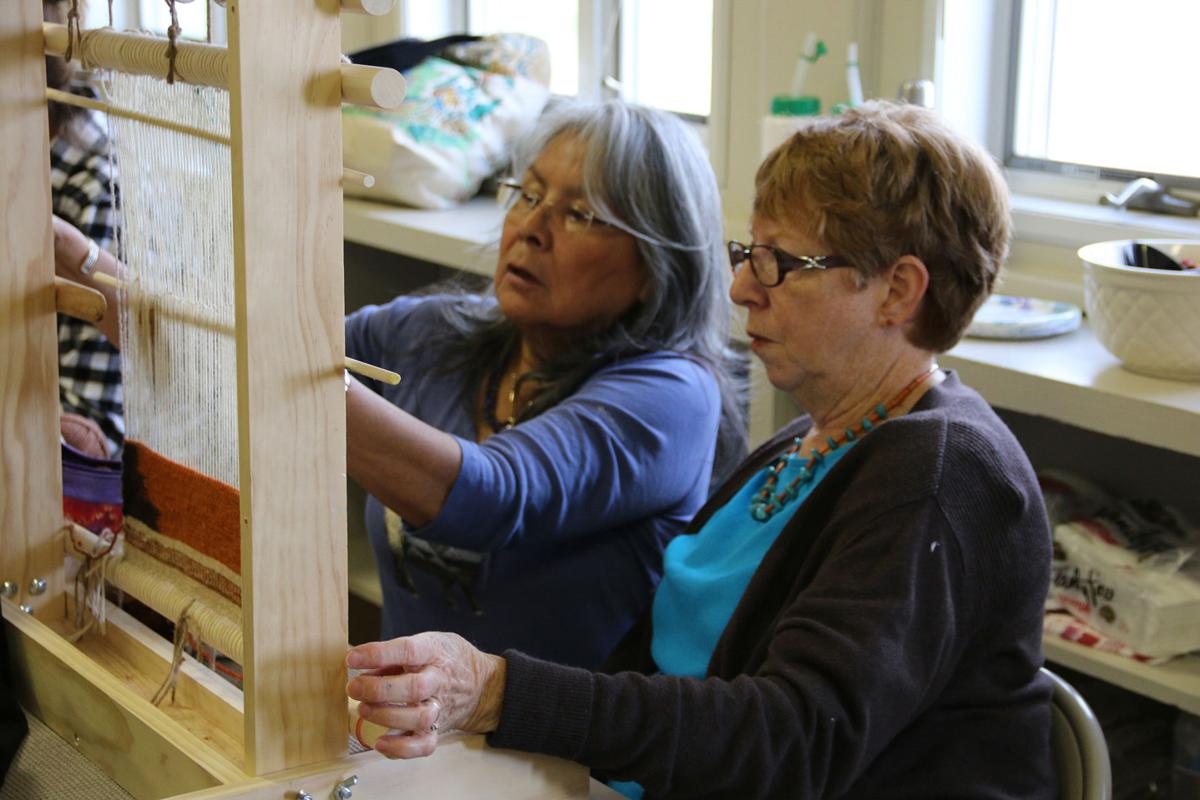 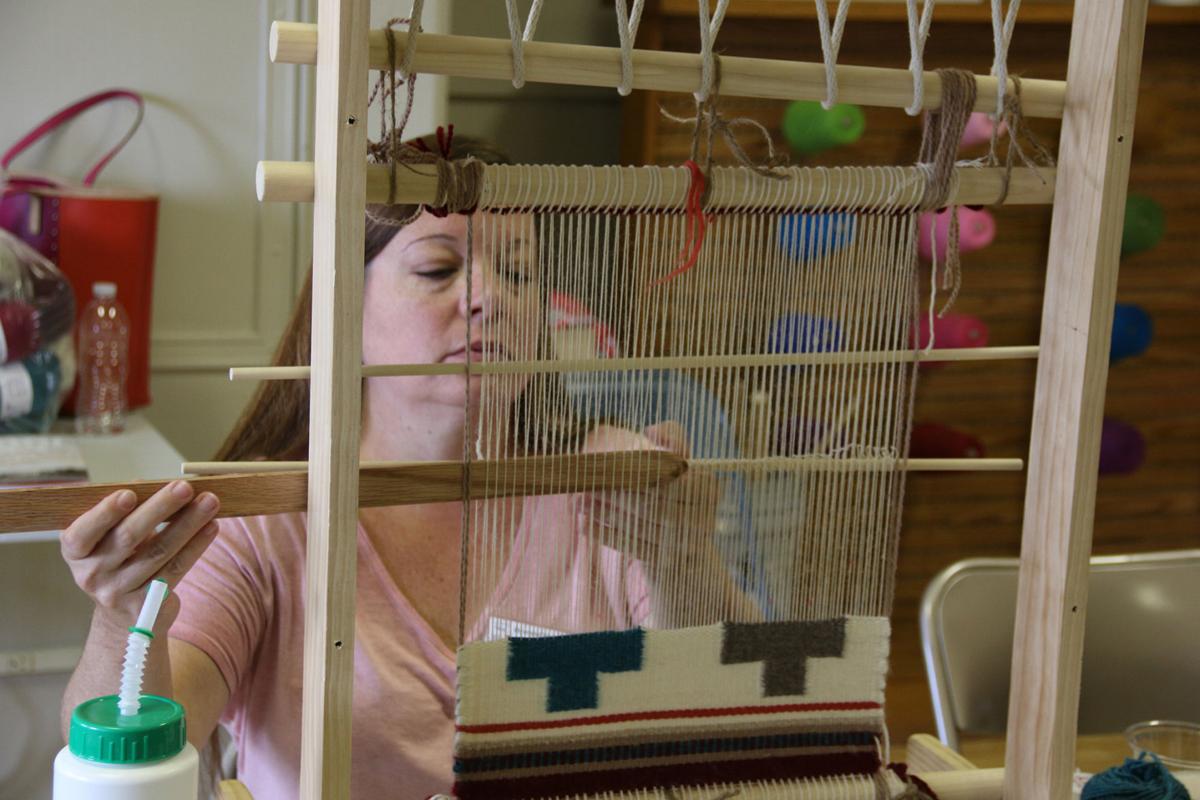 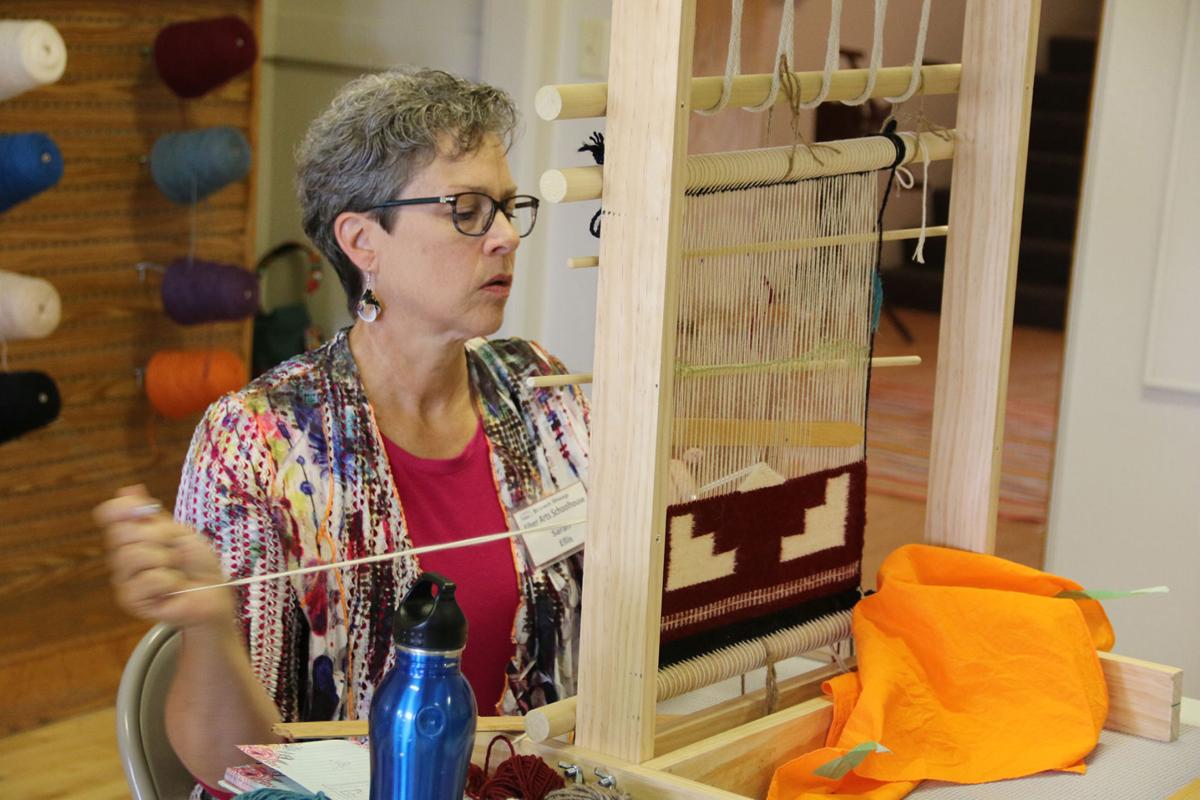 The week-long crash course in weaving is based on a class that takes her a semester to teach.

Naegle comes from a teaching tradition. Her mother and her aunt used to teach weaving classes in Sedona, Arizona.

“I’ve been around weaving all my life,” she said. “We do every process ourselves, from shearing wool from our sheep to carding the wool, spinning it into yarn and weaving it into rugs and other clothing items. We still do everything from home.”

She said her instruction involves teaching the basic techniques of weaving, they encouraging her students to market their art.

“In past years there have been certain colors and designs of Navajo rugs, but today, it’s more freestyle,” Naegle said. “It’s whatever comes to the artist’s mind so there’s no real pattern sketched out. My students come up with their ideas for designs.”

While modern Navajo weaving relies on the imagination, certain traditional symbols are often incorporated into the design. Some of them include mountains, stars and a cross symbol for Spider Woman, who according to Navajo lore first introduced weaving to the Dine’ (the people).

The frame used to create the rug is called an upright loom. In years past, Navajo women would make them from tree branches found along the way as the family led their herds to pasture across the high desert areas of northern Arizona and New Mexico.

Naegle explained that not all the wool was spun into yarn for rugs. Some of the wool was made into felt and used for utilitarian items like coats, leggings footwear and other clothing.

“As I teach, I want students to share an appreciation for our culture and for the skills that haven’t been lost yet and are still being taught,” she said.

One of her students for the week is Laura Callahan, who came to Mitchell from her home in Connecticut. After reading a book on traditional Navajo weaving, she started doing some online research.

“I found that the Brown Sheep Company provided a lot of the wool the Navajo used in weaving rugs,” she said. “There are some weaving classes in New England but they had long waiting lists. I called here and learned there was an opening, so I signed up right away.”

Callahan said what she likes about weaving is the process, the slow and deliberate process of building rows of weaving one upon the next to form a piece of art. Although she’s worked in fiber arts such as knitting in the past, this is her first time for weaving.

Peggy Wells, who operates Brown Sheep Company, said the company was started by her father. In the early days of their wool mill business, he would travel to the Navajo reservation in Arizona, where he started to sell yarn to the Navajo women for use in making their famed rugs.

Business took off to the point of where most of the yarn used in Navajo rug making now comes from Brown Sheep Company, which will celebrate 40 years of business next year.

Wells  said she met Ilene at a fiber arts show in Loveland, Colorado.

“Brown Sheep is a familiar name among the Navajo and they’ve been the bread and butter of our business for years.”

While visiting, Naegle learned about the different fiber arts classes Wells schedules at the old Haig School. Naegle volunteered to come to Mitchell and teach a week-long workshop in Navajo weaving. The first class was so successful a second one was scheduled.

“The history of Navajo weaving is centuries old and it’s beautiful,” Wells said. “There’s no written-down pattern so the design comes from weaver’s imagination.”

She said Naegle’s teaching is in the Dine’ oral tradition rather than learning from books and lessons. So the workshop is different than what most people would expect.

“These students are getting an entirely different learning experience,” Wells said. “The styles of weaving have changed over the years, but it’s still weaving. That’s important to hold on to.”