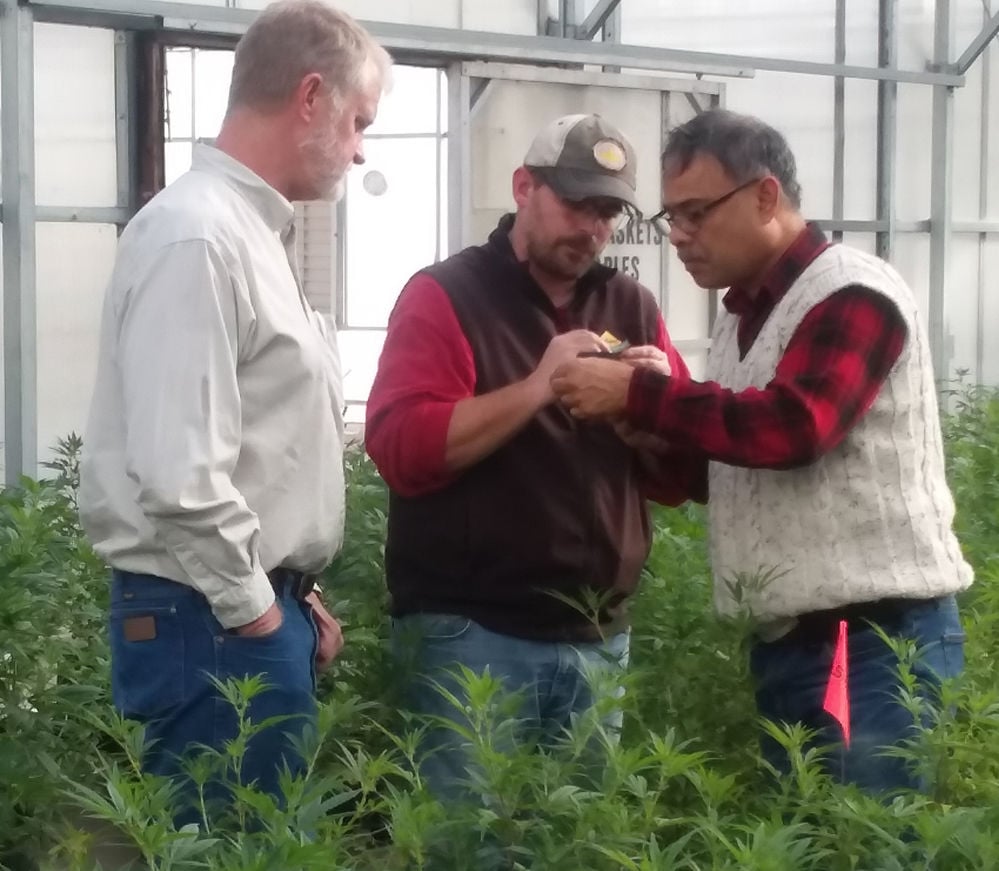 From left, Mark Johnson and PJ Hoehn with Western Farms Seed Company are joined by Dipak Santra, alternative crops breeder with the University of Nebraska Panhandle Research and Extension Center. They're inspecting some of the industrial hemp now being grown in the former TLC greenhouse in Scottsbluff. The company is hosting an open house on Dec. 12 for the public to learn about the many uses for the alternative crop. 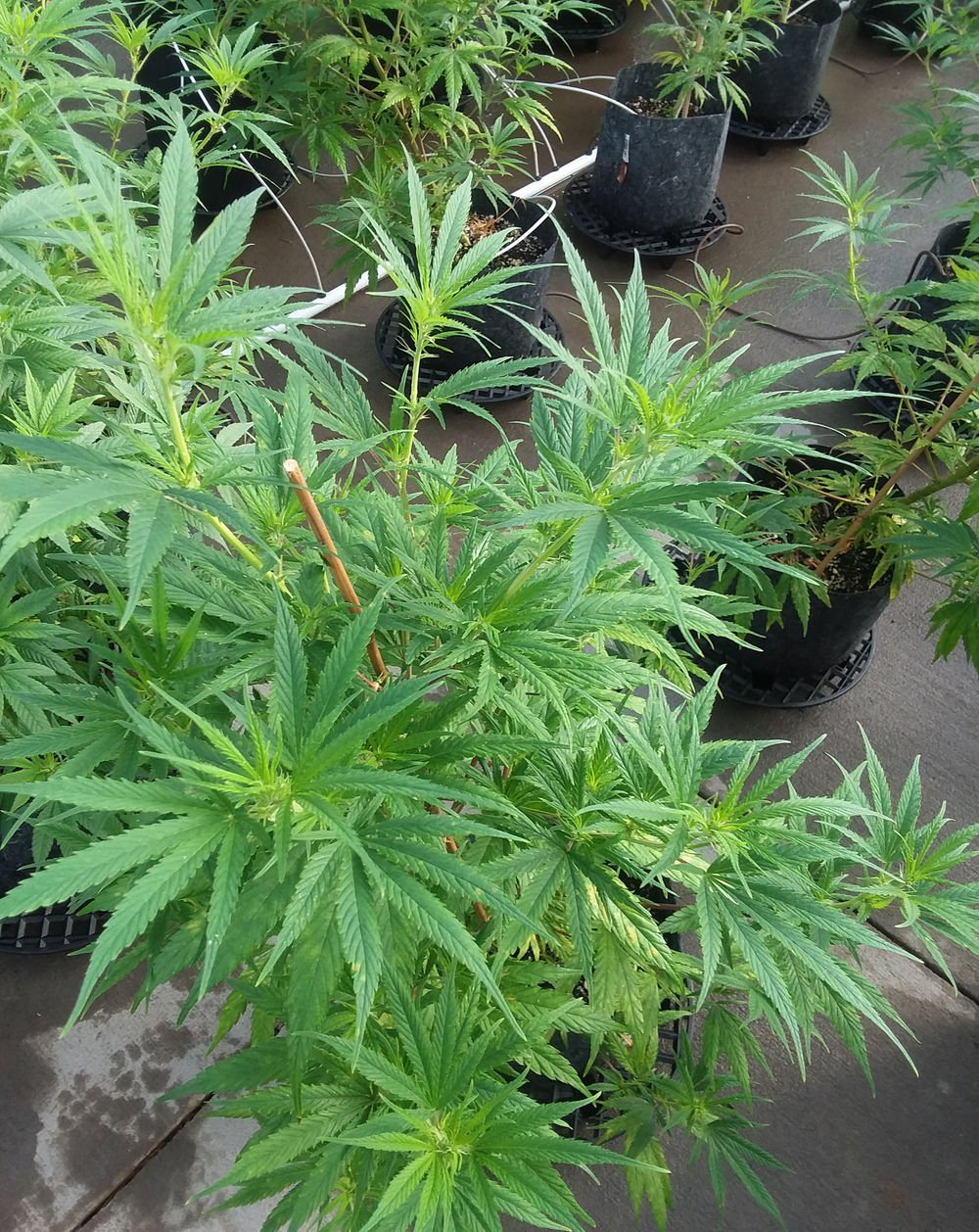 Western Farms Seed Company is investigating the potential market possibilities for industrial hemp. These plants are among the first indoor growth at the former TLC building in Scottsbluff. The public is invited to an open house on Dec. 12 to learn more about hemp production as an additional major crop for the area.

Industrial hemp, a plant with the potential to give a big boost to the area ag economy, is having its debut next week as Western Farms hosts an open house for their growing operation.

On Thursday, Dec. 12 from 4-6 p.m., Western Farms Seed Company will open its greenhouse in the former Aulick’sTLC building on Avenue B in Scottsbluff. Company President PJ Hoehn said it’s an opportunity for the public to visit, see the operation and learn about the many uses for industrial hemp.

“We have one full bay of hemp plants already growing in the greenhouse,” Hoehn said. “Those will be harvested the week of Jan. 17. After that we’ll plant the entire greenhouse.”

Hemp plants require about 3½ months to grow from seedling to full maturity. Although it’s in the same general genetic family as marijuana, and similar in appearance, industrial hemp contains less than .3% THC, the psychoactive ingredient in marijuana.

Once hemp was legalized under the 2018 federal Farm Bill, Nebraska also legalized its production and passed strict guidelines, including regular testing, crop monitoring and background checks for potential producers.

Hoehn said during their current indoor growing season, they work with researchers from the University of Nebraska Panhandle Research and Extension Center to conduct crossbreeding and pollination studies to develop plants that will grow well in the area.

“We have three different varieties established that have good oil content and grow well in dry areas,” Hoehn said. “We’ll continue to breed plants for our climate and conditions.”

He said the open house is an opportunity for the public to see how hemp is grown and its many uses. Over the past two generations, hemp has almost vanished as an alternative crop in the area so few people know anything about it.

Industrial hemp production has great potential, especially at a time when other major crops prices have been depressed for years, Hoehn said.

The first commercial venture for Western Farms will be seed sales to local farmers who would like to give hemp production a try. Like sugar beets, hemp seeds will be specially coated so producers can use their existing equipment for planting. Seed will also be packaged for sale nationwide.

Twin Cities Development (TCD) is also on board, providing marketing and business development expertise. They’ve also been contacting numerous hemp processing companies to see if they would like to expand into the local area.

“Hemp is biodegradable and non-toxic,” she said. “It can be used in fiber, clothing, paint, insulation, biofuels, plastics and even animal feed. It’s unlimited to what hemp can be used for. Plus, it’s cheaper overall to produce than traditional crops.”

CBD oil, a byproduct of the hemp plant, is also used extensively in home health applications, like pain relief products and cosmetics.

Keith Ellis, TCD community and economic development director, said the hemp industry has the potential to join sugar beets, corn and beans as major crops grown in the area.

Western Farms also planted its first few acres near Mitchell for the 2019 growing season. Hoehn said the results were far better than he expected. While the corn and bean crops took a pounding from two summer hailstorms, the hemp crop finished the growing season with no damage.

On Dec. 16, the Scottsbluff City Council will consider an LB 840 funding request from Western Farms to help with startup expenses as the hemp project moves forward.

“We feel that this could potentially be good for the community, diversifying crop and having another potential revenue source,” Scottsbluff City Manager Nathan Johnson said.

“The Hoehn family has put a significant investment into this project,” Ellis said. “They’re pioneers for putting this industry in Nebraska. Being a pioneer is being a risk taker. From an economic development perspective, we commend them for what they’re doing.”

Scottsbluff woman hospitalized after being shot; one man arrested