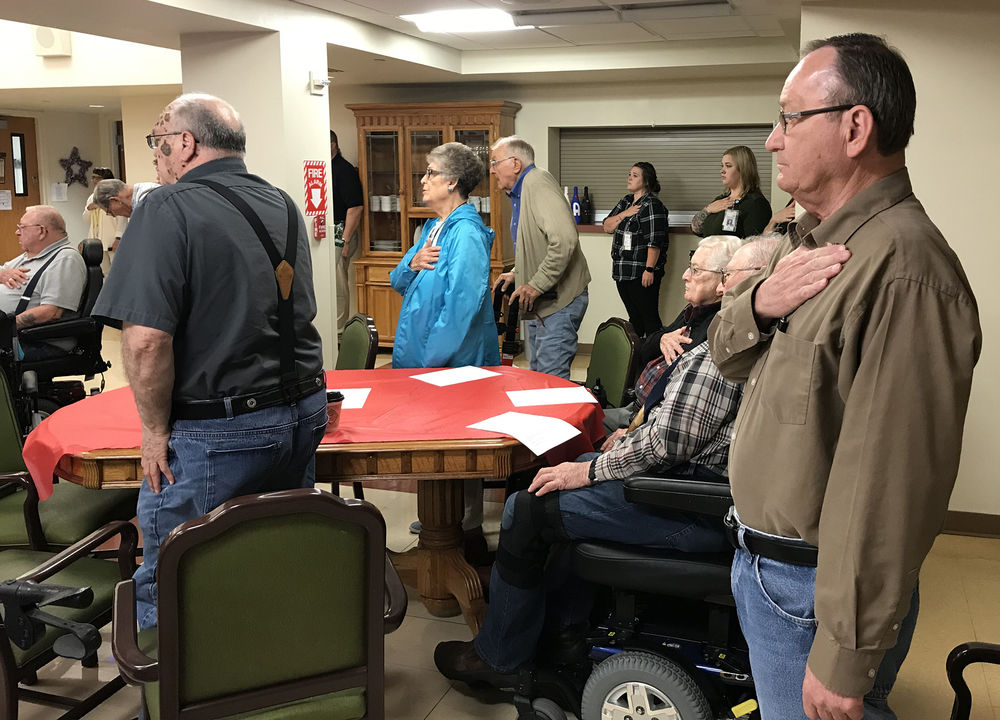 Veterans and staff salute the flag during the Patriot's Day Program at the Western Nebraska State Veterans Home Wednesday. 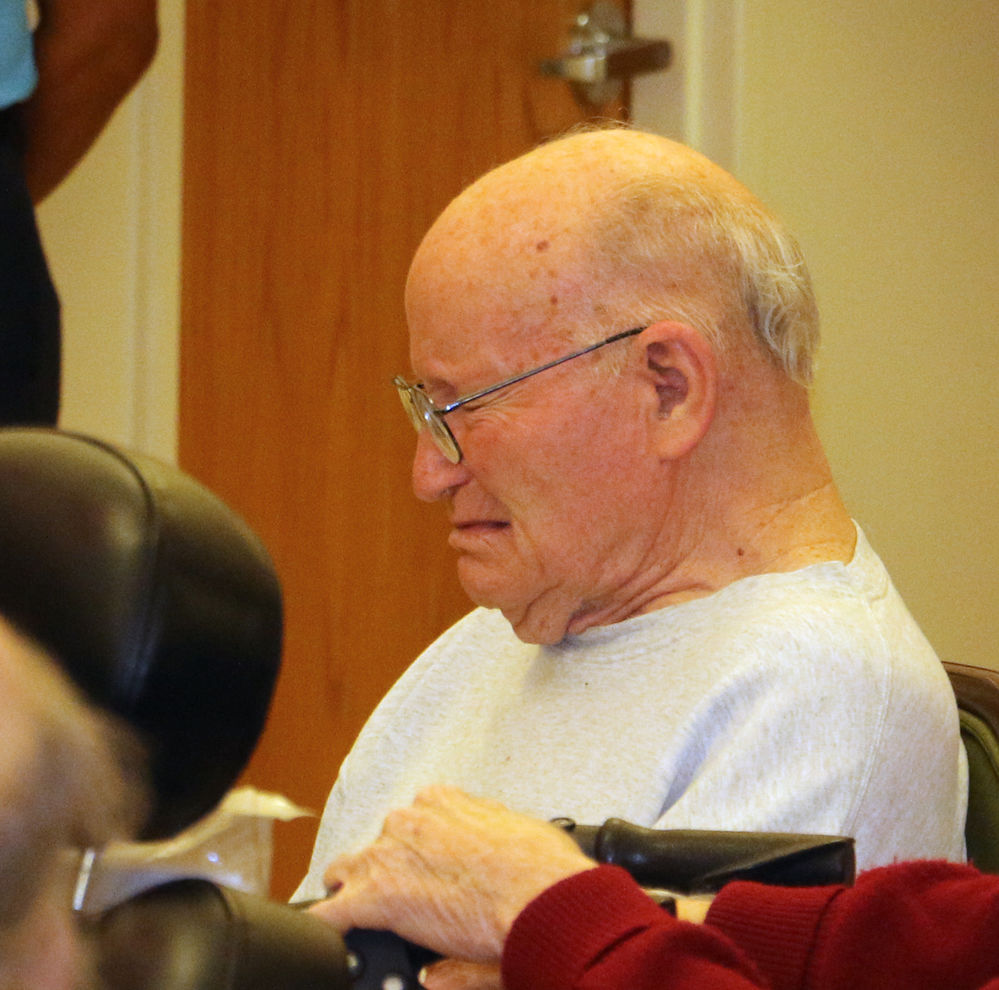 Richard Schaneman's emotions caught up with him during the playing of "God Bless America" during the Patriot's Day Program at the Western Nebraska State Veterans Home Wednesday. 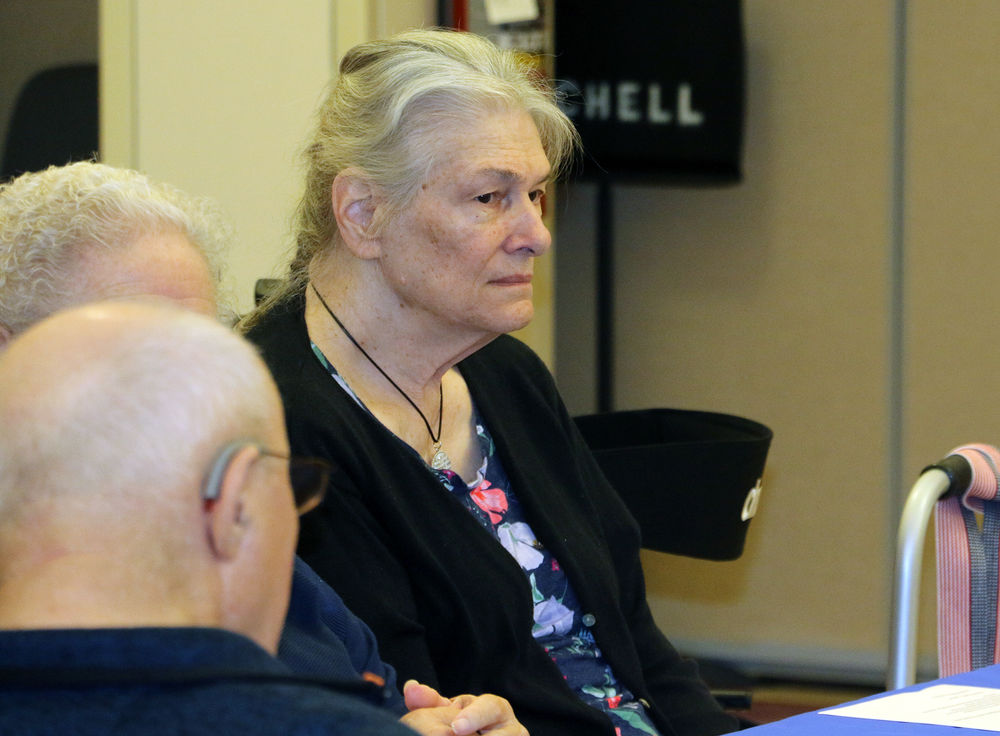 Michele Becker listens to a song during the Patriot's Day Program at the Western Nebraska State Veterans Home Wednesday.

Veterans and staff salute the flag during the Patriot's Day Program at the Western Nebraska State Veterans Home Wednesday.

Richard Schaneman's emotions caught up with him during the playing of "God Bless America" during the Patriot's Day Program at the Western Nebraska State Veterans Home Wednesday.

Michele Becker listens to a song during the Patriot's Day Program at the Western Nebraska State Veterans Home Wednesday.

SCOTTSBLUFF — A Patriot’s Day program brought back memories of 9/11 for the residents and staff at the Western Nebraska State Veterans Home Wednesday.

Patriotic songs were played, and a 9/11 poem was read during the program sponsored by VFW Post 1681 along with the veterans home staff and local veterans service offices.

In addition to the scheduled presentation, the residents were asked to share their memories of the day.

For resident Richard Schaneman, the attacks brought a flood of memories of the 38 years he lived in New York and the many friends he had still living there.

“The morning it happened, my one sister called me and told me to put on the news, and I put it on and the first tower had been hit,” Schaneman said as he broke down in tears. “I tried to reach my friends, and I couldn’t. I could not understand how those people were going to be living in high rises — how they were ever going to go to sleep that night.”

Laura Simpson said she is thankful for those first responders who saved so many others, and for those who lost their lives trying.

“That was the worst morning that I can think of,” she said. “There were a lot of people who did give up their lives, and I’m thankful for the fact that they did. ... It did bring everybody together. ... I’m grateful that we all stand together, and grateful that everybody does fill in in disasters, no matter what.”

Steve Jordan was working in Washington D.C., and one of his lasting memories is the quiet in the city when the Pentagon was hit. He waited at work for a few hours after the attack to make sure he wasn’t moving into more attacks on his route home.

“I had to go right past the Pentagon, and they were still pulling people out,” Jordan remembers. “It was still on fire, flames, and fire trucks and everything. It was very eerie, there was no traffic on I-95. It was just a very eerie feeling to do that and find out later what had happened.”

Kevin Collins, director of the veterans home, recalls the initial shock of what happened, but then the realization of the lives lost trying to save others. He also recalled the days and weeks after the attacks and the unity of the country and its resolve.

“I remember (President) George Bush standing on that rubble and he said, ‘Today, I hear you all, and in a few days the world is going to hear us all,’” Collins said. “Unfortunately, here we are all these years later still fighting terrorism. But if we give up, we lose. We didn’t lose those lives in vain. We’ll never forget them, and that’s why we’re here today.”

Students rehearse with Symphony prior to concert