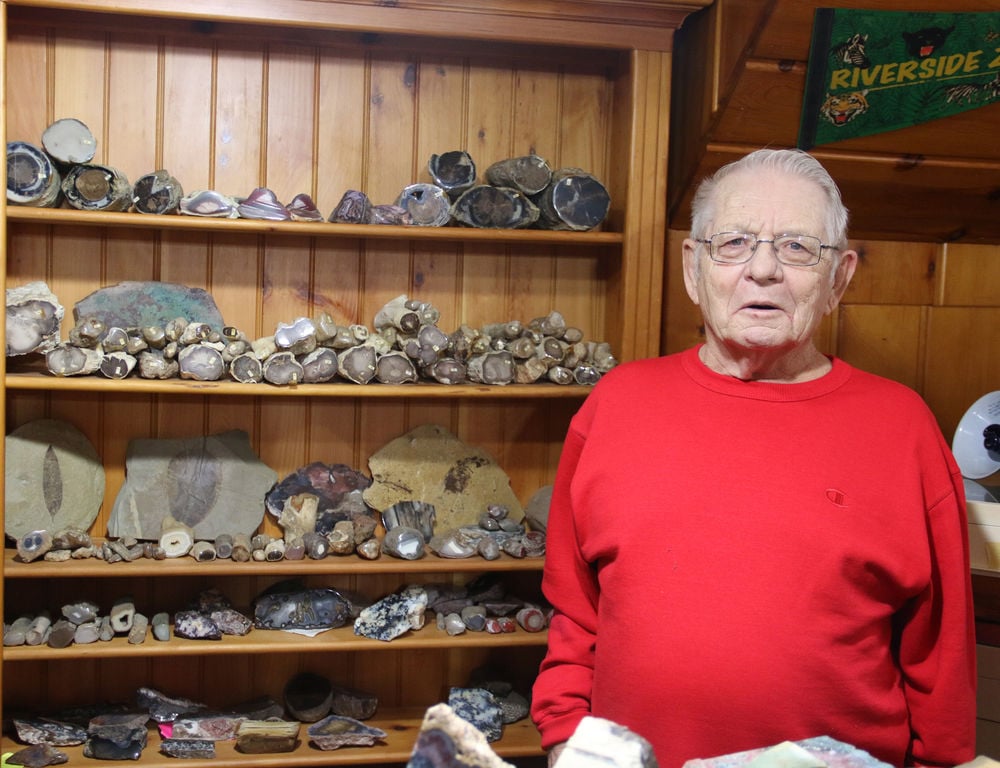 Shelves along the walls in Buzz Lenhart’s basement display a large collection of rocks of all kinds that’s he collected since he was in high school. 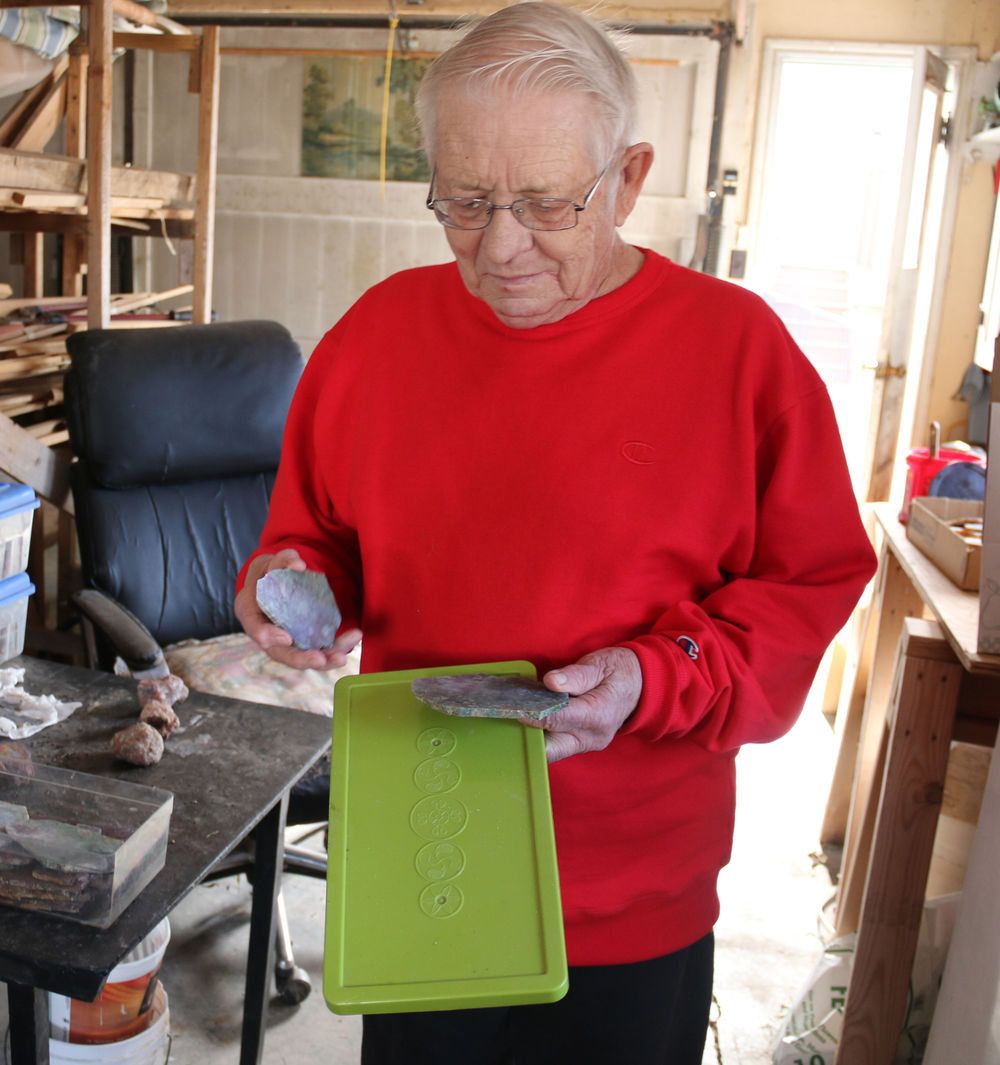 Buzz Lenhart inspects one of the rocks he’s been polishing. Because the polishing equipment requires water to keep cool, Buzz only works on cutting and polishing during the summer months. He’s a member of the Panhandle Rock and Gem Club and they always welcome anyone with an interest to join them.

Shelves along the walls in Buzz Lenhart’s basement display a large collection of rocks of all kinds that’s he collected since he was in high school.

Buzz Lenhart inspects one of the rocks he’s been polishing. Because the polishing equipment requires water to keep cool, Buzz only works on cutting and polishing during the summer months. He’s a member of the Panhandle Rock and Gem Club and they always welcome anyone with an interest to join them.

Like many hobbies, rock hounding might be slowly fading away. But there’s still something magical about keeping your head down, scouring the earth for that odd-looking rock that could be a precious gemstone in disguise.

Sherman “Buzz” Lenhart caught his case of “rock fever” when he was still in high school in Lingle, Wyoming. “I had a friend who collected rocks and he used to stop by and show me some of his collection after school,” he said. “When we moved to Gering in the 1970s, I learned about the Panhandle Rock and Gem Club, so I decided to join.”

Organized in the 1950s, the rock club today has about 20 members, most of them in their 60s and beyond. “I’ve noticed that with cell phones and other technology, people just don’t get out as much anymore,” Buzz said. “They don’t take the time to do it.”

But at club meetings, Buzz and his fellow members discuss rocks, what kinds they’d like to find, what’s being found and about anything else related to rocks and gems.

The group meets the third Thursday of the month at 7 p.m. in the Paul Reed Construction building. Everyone is welcome, and use the front entrance.

The most common types of rocks found in the local area are agates and jasper, but occasionally other varieties can be found along area river banks. “You have to go to Wyoming to find other kinds of rocks,” Buzz said.

A bumper sticker on the door in Buzz’s basement rock collection room identifies one of those locations — Jeffrey City, Wyoming. Located southeast of Lander, it started out as a boom town when the uranium mine opened.

With the end of the Cold War and the collapse of the uranium market in the late 1970s, the community had been reclassified as a ghost town by 1986. But the Jeffrey City area is still a prime spot for rock hounds to search for something unique, especially Wyoming jade.

Another place Buzz likes to search is near Lysite, Wyoming. Although it’s private land, a friend owns a claim to some of it. Like Jeffrey City, it’s in Fremont County. Buzz has collected enough specimens from there to fill most of one of the display cases in his basement.

Closer to home, Buzz likes to go rock hounding in the grasslands north of Crawford and up to the South Dakota state line. It’s a prime area to find the highly colorful Fairburn Agates.

When rock hounds are unable to get out in the field, they’re often found at some of the many rock shows around the region.

One of the big shows, a two-month affair in January and February at Quartzite, Arizona, brings in people from around the world.

But the largest one, also during the winter, is the Tucson Gem, Minerals and Fossil Showcase, spread out over some 40 venues. It brings in researchers, gemologists, miners, rock hounds and more for two-and-a-half weeks of learning and fun.

According to Buzz, the thrill is in the hunt. And he also enjoys spending time in his garage during the summer months. There he keeps his rock saws, along with tumbling and polishing equipment.

“There’s always a treasure to be found,” he said. “A plain looking agate might reveal a beautiful pattern once it’s cut open. Like antiques, you can always find something rare.”

Buzz said the group welcomes anyone with an interest in rocks and the joy of the hunt to join them at their monthly meeting. More information is available by calling him at 308-436-4888.