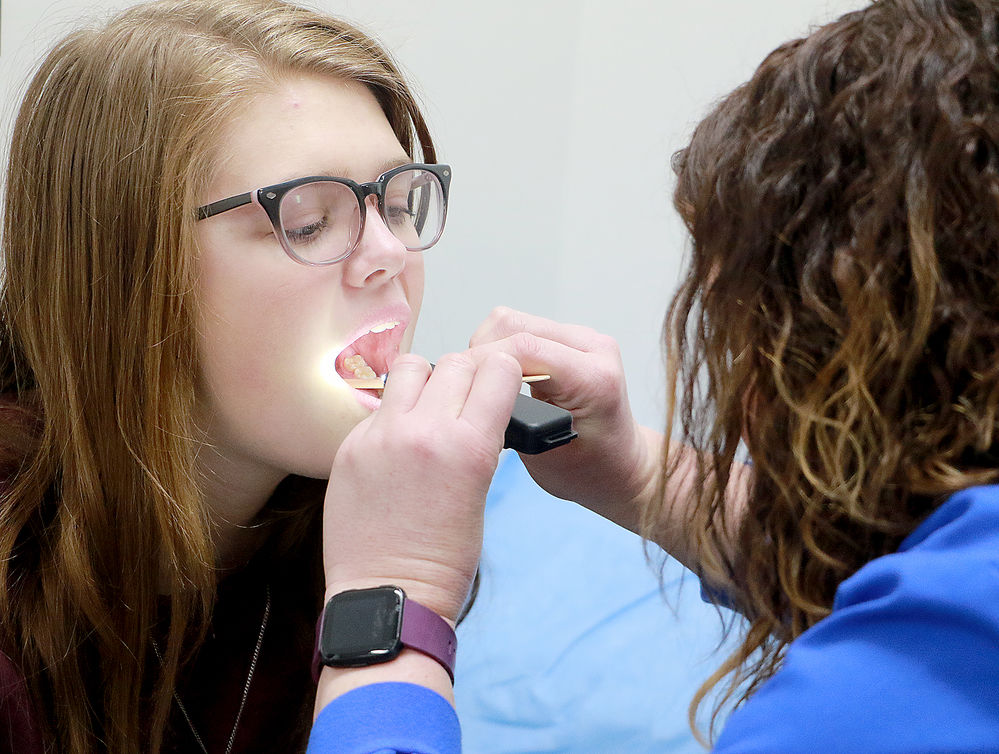 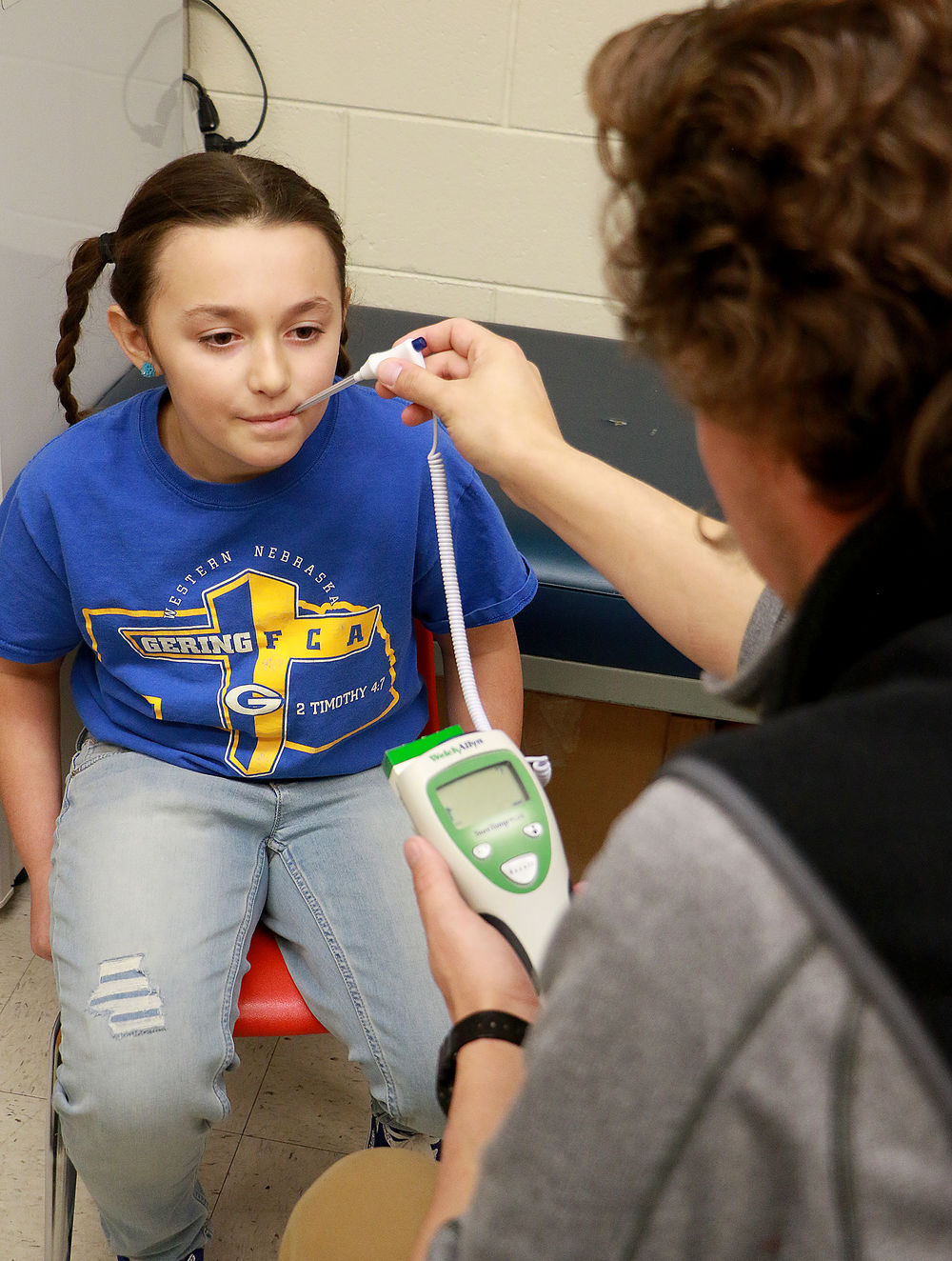 Jayd McDonald, nurse assistant at Northfield Elementary, uses a thermometer to take Bowen Williams' temperature. The number of students and staff in Scottsbluff and Gering schools with influenza is on the rise.

As school staff and students return for the spring semester, school nurses are helping everyone in the districts limit the spread of germs as flu season ramps up.

While it is common for flu cases to peak in the month of February, a recent report by the Center for Disease Control (CDC) shows the influenza virus is widespread in almost every state across the country. Seasonal influenza activity has remained elevated across the United States for nine weeks. During the flu season, the CDC estimates there have been at least 9.7 million flu illnesses, 87,000 hospitalizations and 4,800 deaths from flu.

According to the CDC, the flu is a “contagious respiratory illness caused by influenza viruses that infect the nose, throat, and sometimes, the lungs. It can cause mild to severe illness, and, at times, can lead to death.”

Knowing the heightened presence of this bacteria, local school nurses and janitorial staff are being diligent to keep the schools clean.

Lynne Adams, Scottsbluff Public Schools health services coordinator, said while they don’t have numbers of how many students and staff who are out, they are encouraging healthy habits to prevent the spread of germs.

“We talk with the students about keeping hands washed, covering their cough or sneeze with their sleeve and make sure the students get a lot of rest and fluids,” she said. “That’s the basics, but it would work.”

Students are being sent home if they are experiencing nausea, diarrhea or fever during the school day. Students who have a fever of 100 degrees or higher are also sent home. If a student is sent home, Adams said, “We ask the parents to keep their child home for 24 hours after the fever is gone without medication.”

The challenge with reducing the spread of the virus is that it is an airborne virus, which means it easily spreads from person to person.

Tiffany Leetch, Gering Public Schools school health coordinator, said the district saw an increase in viral infections following the new year. She has visited with staff about having students who are coughing wash their hands and then sanitizing those desks.

“I would encourage the students to push the fluids like water and juice, really anything they can keep down,” Leetch said. “It’s hard because germs are going to spread with a large population.”

At Northfield Elementary, Jayd McDonald, a nurse assistant, said he has seen an increase in students with influenza symptoms, so he visits the classrooms to reinforce the importance of hygiene.

Bowen Williams, a Northfield third grader, said McDonald visited her classroom and talked about washing their hands and staying hydrated.

“He talked to us about drinking water and using a lot of soap and hand sanitizer,” she said. “One day, he came in and told us to drink a lot of water to not get sick.”

Both districts’ janitorial staff are cleaning the building daily, which is part of a daily routine, as well as more thorough cleaning where necessary.

“If we’re feeling like there is a classroom with more illnesses, we would ask for a more thorough cleaning,” Adams said. “We make sure the desks are cleaned more thoroughly in those rooms.”

Adams said Scottsbluff Public Schools is seeing positive cases of influenza, but they are not sure of the strain. While there weren’t a lot of cases the first week of the semester, Adams said that changed this week.

“It all started when school started (in January),” she said. “Someone asked me how many people were out sick and we didn’t have very many. By Tuesday everybody was sick.”

While Adams is hopeful the teachers and administrators have built up an immunity, they are seeing some teachers out as well.

Leetch estimates she sees between 10 to 30 students a day with flu-like symptoms.

As the influenza virus becomes more widespread in the valley, both Adams and Leetch said getting a flu shot can help.

“The vaccine helps decrease the symptoms and shortens the virus,” Leetch said. “Influenza peaks in February usually until March when the weather improves.”

For students who are absent for five consecutive days in Gering, Leetch said they need a doctor’s note clearing them to return to the classroom.

“As the district’s health coordinator, I am all about keeping students and staff healthy and safe in the district,” she said.

Changing the look of our community