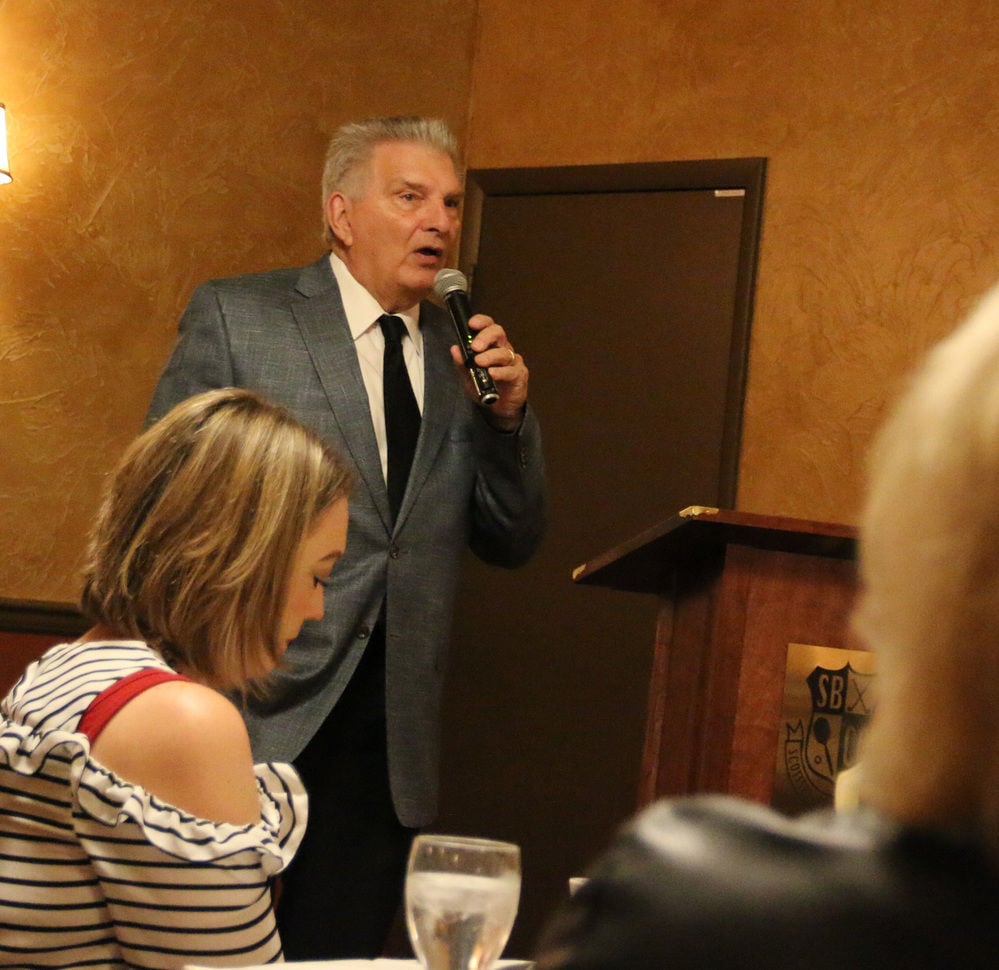 Nebraska State Senator John Stinner gives a "sermon" on the dangers of a petition drive that would create legislaton to give property owners a 35% income tax rebate from their property tax bills. Stinner spoke at the Pre-Legislative Breakfast, sponsored by the Scottsbluff/Gering United Chamber of Commerce.

Nebraska State Senator John Stinner gives a "sermon" on the dangers of a petition drive that would create legislaton to give property owners a 35% income tax rebate from their property tax bills. Stinner spoke at the Pre-Legislative Breakfast, sponsored by the Scottsbluff/Gering United Chamber of Commerce.

“Do you want to be involved in a state that has no future?”

In what he called a “sermon,” Stinner pointed out the dangers of the “35% Solution,” a ballot initiative that, if passed into legislation, would refund 35% of property tax bills back to the owners on their state income tax returns.

“That referendum would be a $1.4 billion to $1.5 billion deduction from the state budget out of an overall $4.5 billion to $5 billion,” Stinner said. “How are we going to do that?”

Stinner outlined some of the math for many people who have told him to “just cut the budget.”

About $1.3 billion goes to K-12 education, which is required by the state constitution. Of that number, some $220 million of that is for special education, mandated by the federal government.

“About 45% of our budget is for education,” Stinner said. “This referendum would take that off the table entirely. That’s our investment in the future.”

He added that much of the budget is taken up by “have-to” items such as aid to individuals. That included the recently passed expanded Medicaid, also overseen by the federal government.

“Another 12% of the budget is for safety,” Stinner said. “Are you going to take money out of prisons? Nebraska is either number one or two in the nation for prison overcrowding.”

The safety part of the budget includes funding the Nebraska State Patrol and the state’s judicial system.

Stinner said that when all the proposed cuts are put together, the state would still fall short of covering the loss from implementing the proposed 35% solution.

“People who want to sign this petition are only putting the state in an economic straight-jacket,” Stinner said. “We won’t be able to provide the services. We won’t have a future because when the University of Nebraska system increases tuition they become non-competitive and Kearney goes away. Then it will be the state colleges.”

He added it disgusts him to hear from petition supporters who keep saying the state Legislature has done nothing to hold down spending.

Before it became a petition initiative to refund 35% of property taxes, the cut was proposed as legislation by State Sen. Steve Erdman of Bayard. The petition drive to get it on the 2020 ballot was launched after the bill was defeated in the Legislature.

Property taxes are still a hot item for debate. Stinner said the Legislature will look at the property tax issue as soon as the next session convenes in January.

Nebraska Lt. Gov. Mike Foley was also in attendance for Tuesday’s Pre-Legislative Breakfast. He said the state’s current incentive package, the Nebraska Advantage Act, sunsets in 2020 and will need to be replaced.

One proposal to be considered this upcoming legislative session is LB 720, the ImagiNE Nebraska Act. The legislation would revise and enhance the state’s incentives by encouraging the creation of higher paying jobs and more investment from employers from both inside and outside the state.

“If we’re to create a future for our children, it will have to come from the creation of new jobs through the private sector,” Foley said. “We have to fix the economic factors that fight against job creation, whether it’s our tax structures or the litigious nature of our culture.”

The Pre-Legislative Breakfast is sponsored by the Scottsbluff/Gering United Chamber of Commerce.

The 35% solution is the citizens last chance to take back control of our state government. We cannot continue to be taxed at one of the highest rates in the nation. Spending is out of control. When the economy of this state is overwhelmingly influenced by the viability and profitability of agriculture, and thousands of farm and ranch families are cutting spending to meet their ever decreasing budget limitations, is it too much to ask that our government do the same? When was the last time there was a REAL cut in spending from this tax and spend group? The 1.3 or 1.4 billion dollars that you say will be cut from the budget will be given back to the people who EARNED that money. They will then, in turn, re-invest those dollars as THEY see fit, turning over in the economy up to seven times. The resulting sales taxes collected by the state will be almost 550 million dollars, over 1/3 of the "lost revenue" from the tax rebate. There are answers to higher taxes, and the best answer is cutting government spending. This petition scares politicians because it FORCES them to do the real, hard work of governing. Please don't let the doom and gloom naysayers discourage you from signing the petition and forcing the legislature to act on our behalf. If this petition qualifies to be on the 2020 ballot, the prophets of doom will go all out to portray the 35% solution as the end of life as we know it.

How many years has the property tax issue been alive? I believe the tax initiative is as much about forcing the legislature to actually solve the problem as it is about the actual 35% reduction. People are sick of the issue being pushed to the end of the session and then there is no time to deal with it. I feel it should be the FIRST ITEM and let nothing else be brought up until it is solved. If they have to be in session all year, fine. People have really had it with politicians who don't serve the people.