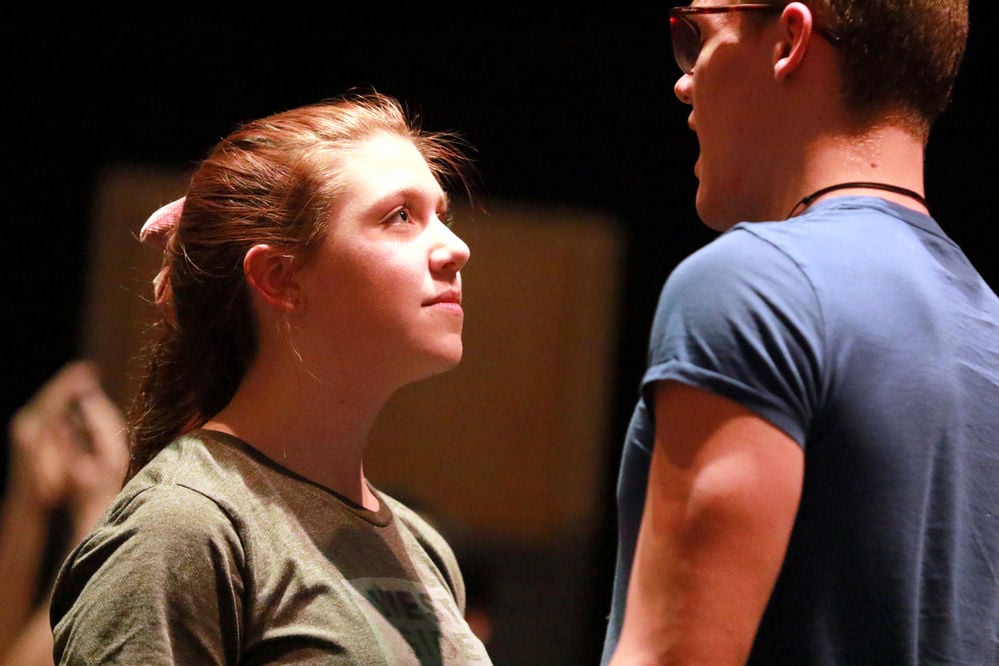 Anna Harveson's character Maria gazes up at Tony, played by Kennedy Ronne as the two characters meet during a dance. The pair were rehearsing for West Side Story, which was officially cancelled this week because of COVID-19. 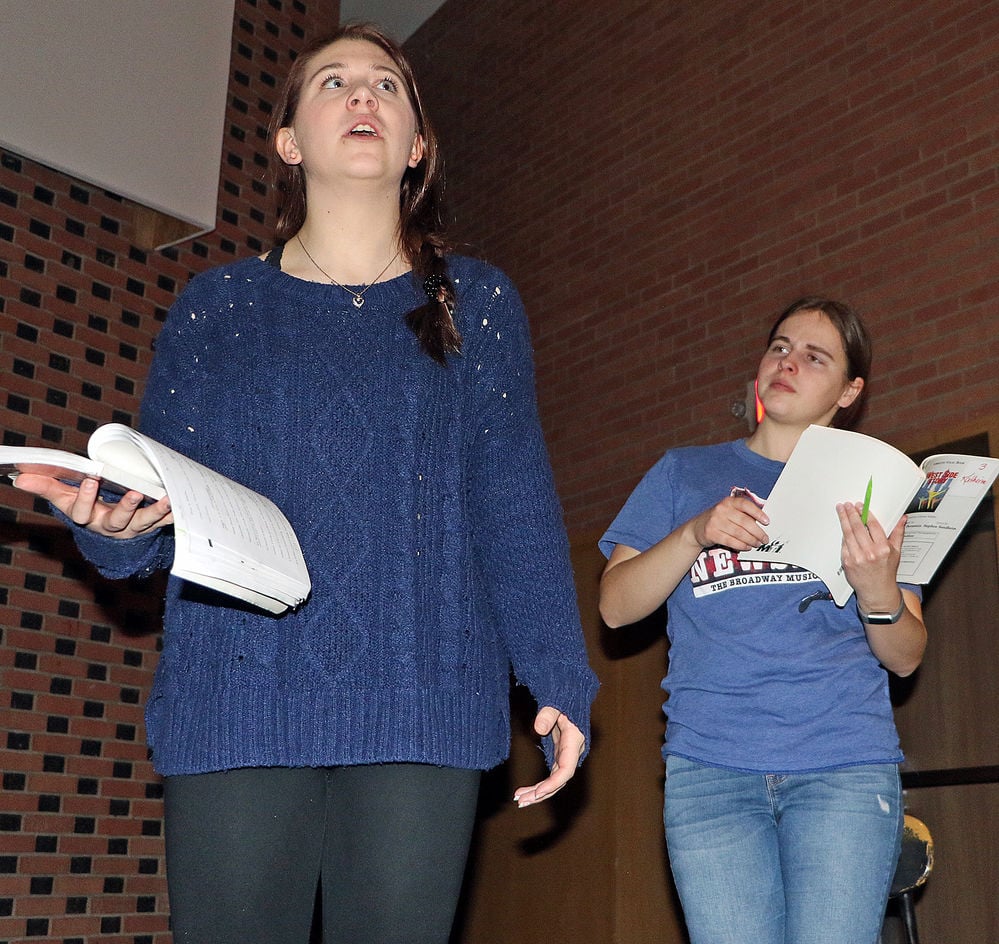 As they prepare for the dance, Maria, played by Anna Harveson, asks Anita, played by Katherine Reisig to change the dress' color from white to red. The two were preparing for their final musical at Scottsbluff High School, West Side Story.

Anna Harveson's character Maria gazes up at Tony, played by Kennedy Ronne as the two characters meet during a dance. The pair were rehearsing for West Side Story, which was officially cancelled this week because of COVID-19.

As they prepare for the dance, Maria, played by Anna Harveson, asks Anita, played by Katherine Reisig to change the dress' color from white to red. The two were preparing for their final musical at Scottsbluff High School, West Side Story.

The sets for West Side Story have been sitting on the stage at Scottsbluff High School since March, nearly complete and ready to be part of a show that will not go on.

When the doors of schools across the country were closed because of COVID-19, there was hope that maybe if they waited long enough, the students would have a chance to perform. Now approaching the end of June, the announcement was made earlier this week that the show has officially been canceled.

“By the time they officially canceled it, I wasn’t surprise,” recent graduate Katherine Reisig, who had been cast as Anita, said. “It would have been amazing if we had still been able to do it, but by that point, I was fairly certain it wasn’t going to happen.”

Vocal instructor Brad Ronne said he was heartbroken about having to make the decision to cancel, he’d wanted to do the script for years.

“It is a show that I have always wanted to do, but you have to have a large cast of guys who are strong singers and dancers to pull it off,” he said. “It’s a tough drama to pull off.”

This year, though, he had the cast he needed and they had been working so hard for so long.

“This has been really tough,” he said. “Since we were so close to production … much of it was ready to go. The sets were nearly complete and are still sitting on stage.”

Auditions took place in December and rehearsals kicked off in January, running until March 13. Some student crews began work in February.

In addition to handling the usual stage work, Ronne said, it was students who created the program, planned costuming, lighting, sound design and advertising among other things.

The production included 65 cast members and 100 crew members — 37 of them were seniors.

“The January rehearsal calendar was two days per week,” Ronne said. “By March 13, we were running four rehearsals a week until 10 p.m.”

Anna Harveson, another now-graduate, said they also spent time memorizing their lines outside of scheduled rehearsal, including during their CATS class, which is like homeroom.

They were two weeks out from opening night when everything came to a screeching halt and the hours of rehearsal were at risk of being in vain.

Harveson, like many of the other participants, wasn’t new to the stage and this was the last hurrah of high .

“My mom always took me to shows when I was little, so I grew up with so much exposure,” she said. “Once I got to high school, I just got as involved as I could.”

She wasn’t expecting West Side Story to be the final script she’d perform as a high school student, but looked forward to the challenge.

“I was Maria, and before this year, I was worried I couldn’t be a serious/dramatic actor, but I found out through the rehearsal process that I could,” she said. “It definitely challenged me, and I’m thankful for the experience.”

Musical was her favorite activity, and something she’d been looking forward to being a highlight of her senior year. As she spent the last semester cooped up in her house, she began to realize it wasn’t going to happen.

Reisig also hoped there was still a chance, but when it was announced on March 22 that schools would be close until at least May 1, it sunk in.

“All of a sudden I realized I wasn’t going to get a chance to say goodbye to the high school musicals I had idolized since I was 10 years old,” she said.

She would no longer have the opportunity to perform “America,” the song she was most looking forward to, alongside her peers.

“All of a sudden not doing musical meant not dancing Mambo and America; not having people sign my musical poster, not writing my cast mates notes in the dressing room,” Reisig said. “Not having my senior musical.”

It was the last of a long line of shows Reisig had participated in, beginning with a SHS production of Wizard of Oz when she was a fourth grader.

“I’d seen musicals before, and I loved acting, but that was really the first time I realized that I would get to do this amazing thing in high school,” she said. “For as long as I can remember, I’ve had this passion for music and acting, and I love getting to go up on stage and share in a unique and wonderful experience with my cast mates and with the audience. There hasn’t ever been a question of whether or not I will audition, because I love what I’m doing so much.”

Opening night came and went, and cast and crew members isolated at home.

“I knew it was over when we didn’t hear much from Mr. Ronne toward the end of May,” Harveson said. “When we were out of school, I was beyond upset. I can’t even describe how I felt, this is my favorite school activity and I didn’t get to participate, so it broke my heart.”

Ronne said had hoped maybe waiting it out would be the answer.

“Since much of the work was already complete, we could easily wait it out until things cleared up,” he said. “Sadly, there were just too many restrictions to make the show work logistically.”

Many patrons have expressed that they don’t want a refund, but those that do can request one by visiting www.ronne.com and clicking the link for tickets. There is a form to fill out for a refund request, and refunds will be issued for the face value of the tickets.

Money will be refunded back to the card used to purchase the ticket in about a week, minus the fees charged by ShowTix4U, which was about $1 per ticket. To report issues or ask questions, Ronne can be contacted at bronne@sbps.net.

Any ticket money that isn’t refunded will be used by the musical program to cover the expenses of productions.

Despite the disappointment, the young women have been trying to look at the silver lining — the memories they made along the way.

“All the cast made the rehearsals amazing,” Harveson said. “We had so much fun together and made so many memories. I’m sad that it’s over.”

She said she was grateful for the experiences that Ronne, the creative team and accompanist Barb Becker left her with.

When asked if the set would be used for West Side Story next year, Ronne said no.

“So many of the main characters were seniors,” he said. “We just won’t have the right mix of kids next year to make it work.”

Ronne said was so excited for the community to see the production his students had spent so much time preparing for.

“For so many vocal music students, the musical is a major milestone in their year,” he said. “It makes me sad that they did not get to do that. I will miss these seniors terribly.”