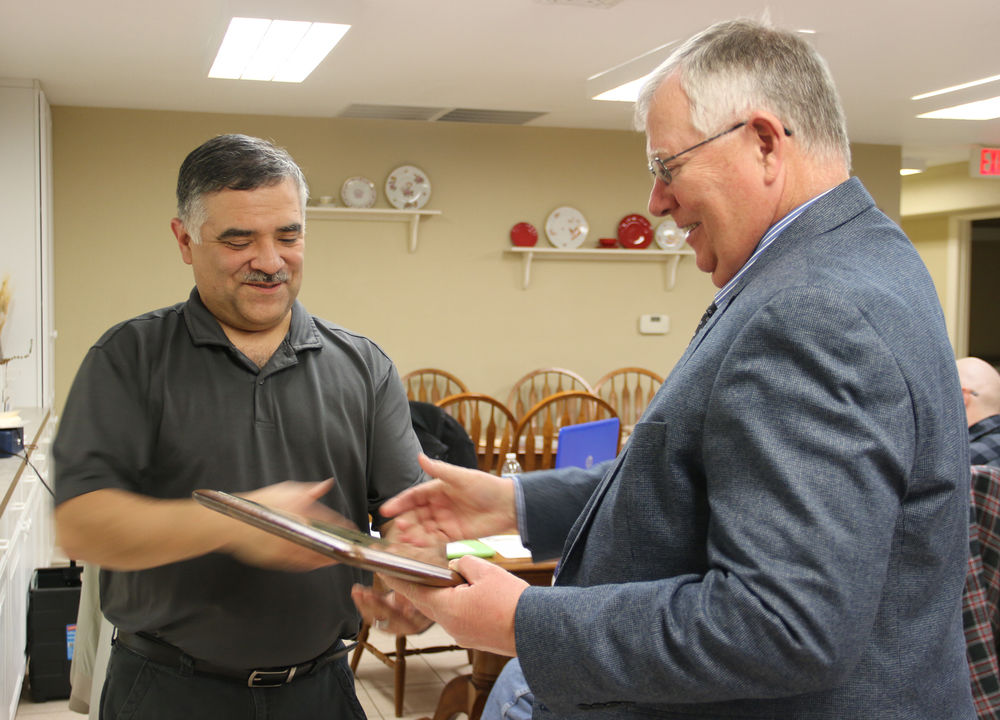 Terrytown Mayor Chris Perales, left, congratulates Lonnie Miller on his retirement from 12 years of service as city administrator and treasurer. Miller said he and his wife plan to do some traveling to see their children. He also plans to tackle a number of honey-do projects around the house.

If funding is available, the City of Terrytown plans to remove its landmark water tower once the city's water system upgrade project is completed. Installed in 1949, the tower continues to rust and funding isn't available to refurbish the structure.

Despite contractor delays, inclement weather and other hurdles, Terrytown’s multi-year project to completely upgrade its water system should be finished this summer.

The upgrade became necessary after one of Terrytown’s two water wells had to be shut off due to higher arsenic levels than allowed by federal regulations.

The estimated $3.1 million project included some new water mains in Terrytown and adjoining unincorporated Bellevue, as well as 200-300 new water meters for all residences and businesses.

Work started in 2017 when the city connected with neighboring Gering’s water system to supply its water needs.

The water mains have been installed and the remaining water meters will be hooked up as soon as spring arrives.

Until the entire system is operational, water users will continue to be charged a flat rate, even if their business or residence is connected to a meter. The meter reading will be included on the monthly bill so users will have an idea of what their bill will be once metering begins.

Another part of the project will be noticeable to the public. The water tower along Five Rocks Road will be taken down.

The tower dates back to 1949 when local entrepreneur Terry Carpenter founded Terrytown. For many people, it’s become a sort of landmark that identifies Terrytown’s location.

Terrytown City Engineer Jeff Wolfe said the city council considered three options. One would remove the tower. Another would keep the water tower operational. The third option was to take it out of service but leave it in place.

Because Terrytown now gets its water supply from Gering, a separate tower is no longer needed.

“It boiled down cost,” Wolfe said. ‘Because of the added cost of the last two phases of the water project, there weren’t enough funds left to refurbish the water tower.”

He said for the past several years, the tower has been rusting. An inspection of the tank’s interior revealed the coating is starting to come off.

“Neither the state nor federal governments had any money to help with refurbishing the tank,” Wolfe said. “Terrytown doesn’t have the funds to pay all the cost.”

Wolfe said he’s also heard public comments that the tower is the only “monument” Terrytown has. Technically, the tower isn’t in Terrytown at all. It’s located across the highway in Bellevue, but it is considered a part of Terrytown’s identity.

While the water upgrade project is expected to be completed by  summer 2020, removal of the water tower might have to wait until the next spring.

“We’re going to meet with the state and the USDA next week to see if any funds are available for removing the tower,” Wolfe said. “The council will have to make the final decision based on what kind of funding is there.

"We’ll also have to notify the companies that are leasing space on the tower, as they’ll have to remove their communications equipment. In the meantime, we’ll put together a bid package to see who can do the work.”