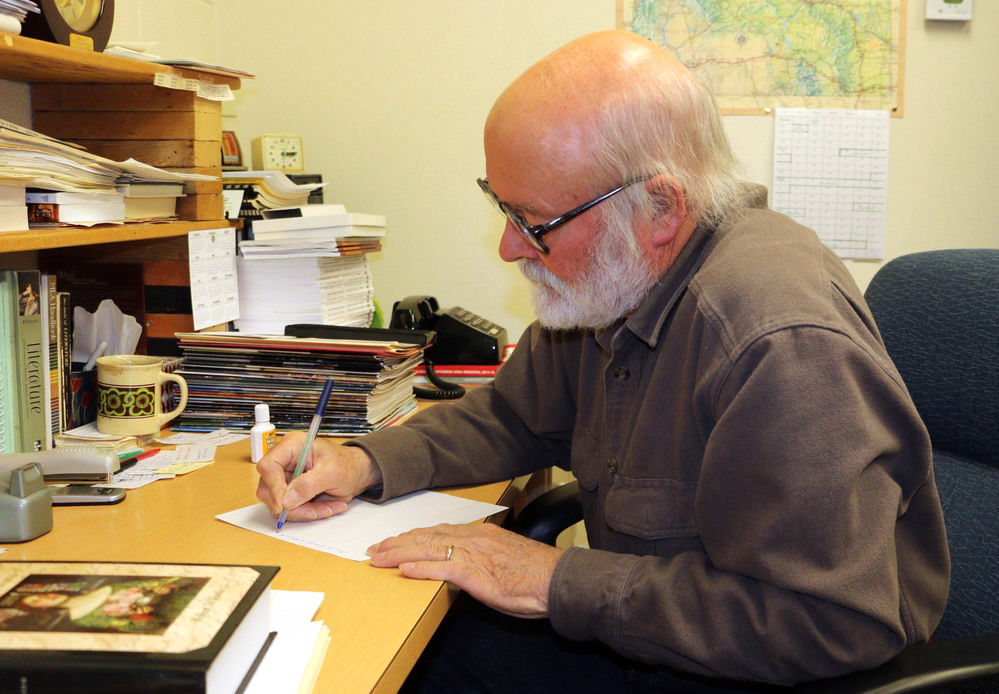 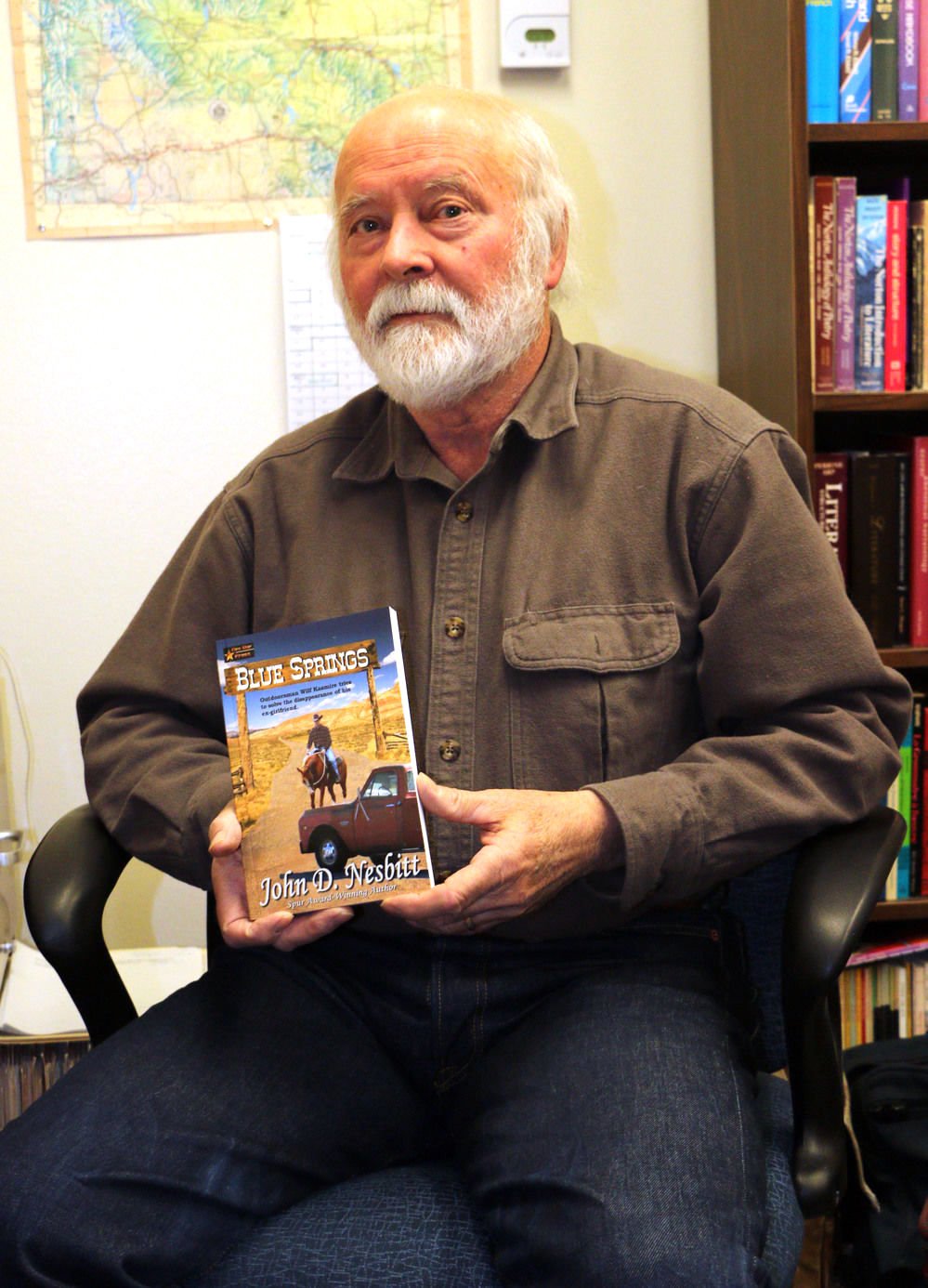 “Long, long ago, I wanted to be a writer,” he said. “I think I tried a novel early and was kind of afraid of it and didn’t know how to go about it even though read and studied lots of novels. The idea of doing it myself was a little intimidating.

He told himself that, “Sooner or later, I have to do this,” and set himself the goal of writing a contemporary novel. But completing the book was only half the challenge.

“I couldn’t get it to go anywhere in terms of getting someone to accept it,” he said. “I had an agent who said, why don’t you write a genre, western?”

An English and Spanish instructor at Eastern Wyoming College, Nesbitt was thoroughly familiar with the western novel.

“I had studied the western novel in my doctorate dissertation and lots of other academic work I’d done,” he said, “so I thought I’d give that a try.”

It was in westerns that Nesbitt found success. Since 1994, he’s published 27 books, most of them historical westerns, many of them mysteries.

“I think the opportunities for success are maybe a little more open in genre fiction,” he said, “not necessarily because it’s easier—I actually think it’s kind of hard—but because it’s easier for editors and publishers to look at your work and say what it is and know what they’re going to do with it.”

Genre fiction are works that fit into a specific category of writing: western, science-fiction, romance, etc. The fact that most of his books fit into these categories, Nesbitt’s publisher has an easier time marketing the book. It also happens to be a genre that he likes.

“They say that you write what you like to read,” he said, “and when I was young, maybe from the eighth grade to my early 20s, what I liked to read in my spare time was westerns and mysteries.”

That love for westerns and mysteries in his youth continues to affect what he writes today. His latest book, “Blue Springs,” is the story of a Wyoming man searching for his ex-girlfriend when she goes missing.

“It’s a kind of storyline that I’ve done in variations here and there,” he said. “It’s a missing-person mystery.”

When he writes a mystery, Nesbitt says he tries to come up with the ending first and then work his way toward it. Not every writer follows that rule, however.

“A lot of people just say, ‘Well, I get together with my characters and they lead me and tell me where to go and they’re just about always right,’” he said. “Some people let on, at least, and it’s pretty genuine in a lot of cases, that they really don’t know where the story’s going to go. I’m a little bit more, I know how I want this thing to end, but when I get to the conclusion I like to leave things open enough that if I’ve got a better way of tying things up, I’m not totally handcuffed to what my original story plan was.”

When it comes to actually writing books, Nesbitt tries to keep his style tight. When he writes historical fiction, his goal isn’t to transport the reader to the past with long descriptions.

“What I’m looking for is something that for me, at least, something that has a clarity of form and a concise of execution,” he said. “Some people worry too much about that and they’ll go on for pages giving exposition of what this town looked like in the 1880s or what the interior of a railway station is, but I come from the line of thought that says you want to have your form and then execute that form as purely as you can.”

When it comes to actually writing, Nesbitt likened it to carving the statue of an elephant out of a stone.

“It’s real easy,” he said. “You just get rid of everything that doesn’t look like an elephant. A person has an idea of the form and then what the person does is try to bring out the form and get rid of all the stuff that is extraneous.”

Nesbitt said that he gets ideas from everywhere: stories, real life, everywhere.

“Maybe you’re reading a story and you get an idea from the story,” he said. “Maybe the movement that takes place in this story as the person in the story moves to an improvement of awareness at the end is something you’d like to write about. Maybe a person has had a memorable experience and gets some of the storyline from that. Maybe here’s a story from somebody else. You get your ideas from everywhere and you get one idea from one place and another idea from another place and it’s like a pot of stew: you put it all in together and blend it all so it’s all part of the same substance.”

For example, the main character of “Blue Springs” is named Wilf, a Canadian name that comes from two sources.

“A long time ago, I read a story set in Canada and there was a character in there named Wilf,” he said. “Then there was this, not exactly corn but very much set in his time period, western singer called Wilf Carter. He was a yodeler. So I take this real serious but deeply ironic and grotesquely serious story where there’s a Wilf and I take this slightly corny cowboy singer and I put them in the pot and mix them up. I have this person who lives in Wyoming but has these northern affinities.”

Nesbitt also works to ensure that his Wyoming westerns also sound authentic. Most historical westerns are written in the aftermath of the Civil War, which was devastating to the American south but less meaningful to the west. What they usually miss, he said, was the weight that weather and distance have on the mind of Wyomingites.

“I don’t want to sound too sanctimonious here,” he said, “but there are people who write novels set in Wyoming and I don’t think they know very much about Wyoming. Maybe they get on Wikipedia and get some information there or other reference material, or maybe the come to Wyoming on their summer vacation and drive from here to Yellowstone or something, but one does not get an intrinsic feel for Wyoming in that story.”

“Blue Springs” is available for purchase at online book stores.