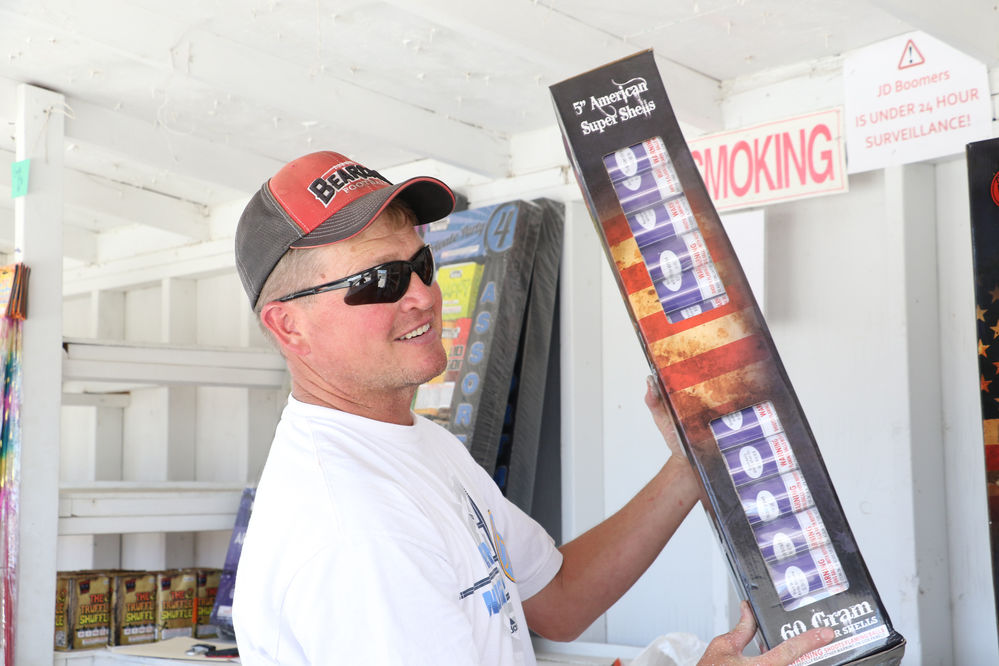 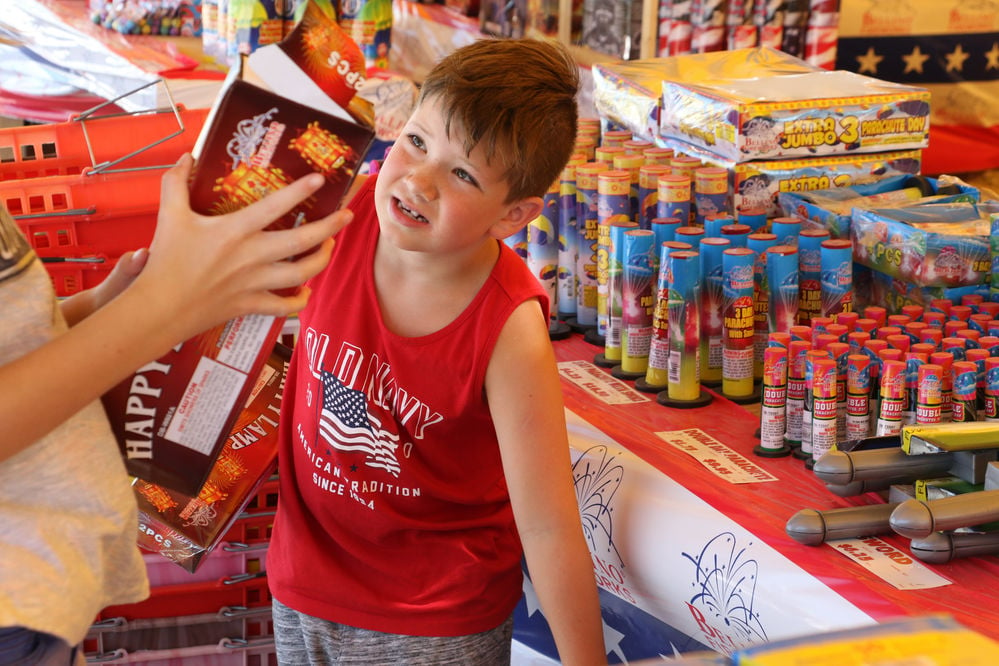 Siblings set out fireworks for sale at the Finders Keepers non-profit fundraising firework stand located on Avenue I near Wal-Mart. 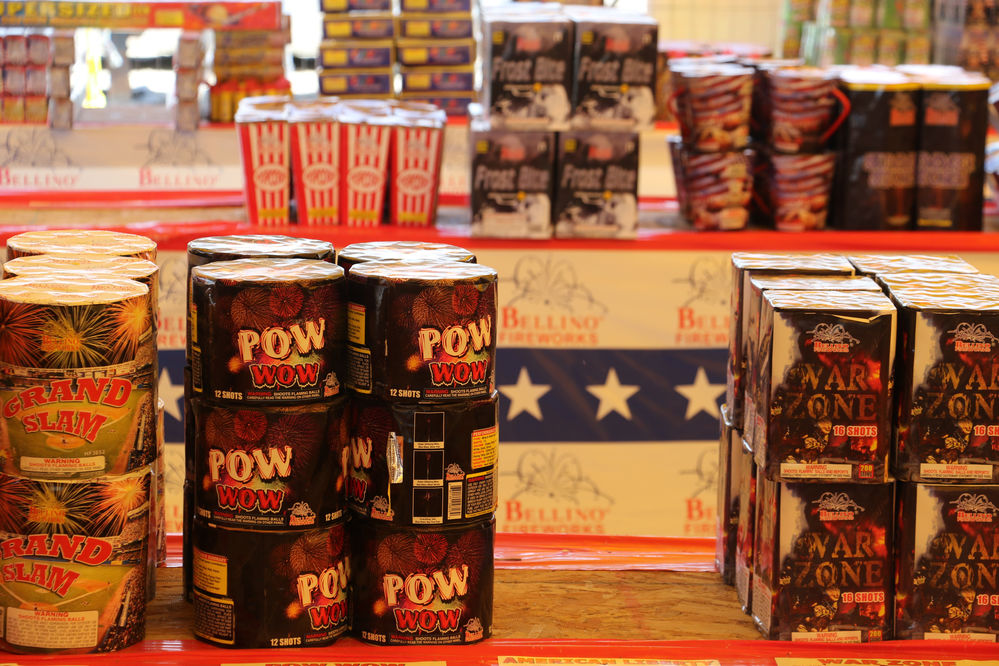 Fireworks sit on display at firework stores and stands across Scottsbluff.

Siblings set out fireworks for sale at the Finders Keepers non-profit fundraising firework stand located on Avenue I near Wal-Mart.

Fireworks sit on display at firework stores and stands across Scottsbluff.

Firework stands and stores filled with bright colors and shelves full of big explosions are a staple of 4th of July celebrations, and firework stand operators say this year’s selection of popular fireworks is nothing short of exciting.

Firework stand owners and operators located in Scottsbluff agree, finale cakes, known as the large displays generally used to end firework shows are fan favorites, but the small novelty fireworks such as smoke bombs and spinning and sparkling fireworks continue to be a standing item for kids and families.

With names like “Nuclear Warfare,” “Pandora’s Box,” “One Bad Mother” and “Wacky Tobacky,” JD Boomers firework stand owner Jon Amundsen laughed and said, it seems like the crazier the name, the better the fireworks are.

Amundsen said at their stand located in front of Wal-Mart, the fireworks with the largest allowable explosion tends to be everyone’s favorite, such as “Wacky Tobacky,” a nine-shot finale firework which customers tend to enjoy year after year. JD Boomers selection of five and six inch super shells, also displays which show off large effects, is a choice which Amundsen said he also recommends.

Smaller fireworks have their place in the sales category.

“The larger finale fireworks don’t normally sell until the last two days, but the small novelty fireworks sell out much sooner because kids are excited to come in with their parents to buy fireworks early,” Jill Trautman, at Fireworks Unlimited, said.

The “Torpedo,” a firework kept in stock at Fireworks Unlimited located on Avenue I, is known to be a popular item years in the past. Trautman described the “Torpedo” as an adult snapper, similar to the small popping fireworks which snap when thrown on the ground, known to be a kids favorite, the “Torpedo” takes the smaller snappers to a louder and larger scale.

“We actually have to order them (the Torpedo) from a specific company because they are hard to find, and we normally sell out of them every year,” Trautman said.

“Almost everybody that came through the line last year was getting something apart of the sale,” Brott said.

Brott said he recommends “Weapons of Warfare,” a large finale firework with a display of large bright colors which travel high in the air. Their unique selection of large fireworks, one specifically with Husker fans in mind, “Big Red Thunder, tends to be of interest year after year.

Scott Curtis, member of Finders Keepers non-profit organization said, at their fundraising firework stand located on Avenue I east of Viaero, family packages are popular items and their stock of cheaper small novelty fireworks, generally popular with kids, tend to sell in large numbers. Their firework stand also possesses a number of special deals, including a select number of buy one, get three free fireworks.

“We really have something for everyone’s budget,” Curtis said.

Eric Wilcox, owner of Discount Fireworks located on East Overland, said a popular firework in stock at their store, “One Bad Mother,” a large 16-shot display of bright colors and loud sound effects is a popular purchase of costumers in the past.

“We have the largest selection of fireworks in the Panhandle,” Wilcox said. “We have a variety of small and large items.”

Community Christian Fireworks Stand located in front of Paul Reed construction, also has a variety of fireworks for families and individuals in search of large displays.

Volunteers said the “10 foot Super Parachute,” a single shot parachute firework with an army figure is a favorite of kids in the past. In addition, volunteers said, “Great Balls of Smoke” a popular smoke ball well worth the purchase in comparison to smaller smoke balls.

Operators of firework stores and stands located in Scottsbluff said they encourage customers to stop by and find assistance with putting together their own show or packages for their specific budget.

Fireworks sales began in Nebraska on Thursday and will continue until July 4. Before each of the Scottsbluff fireworks stands opens, Scottsblu…

Regional West among sites to expand COVID-19 testing in Panhandle