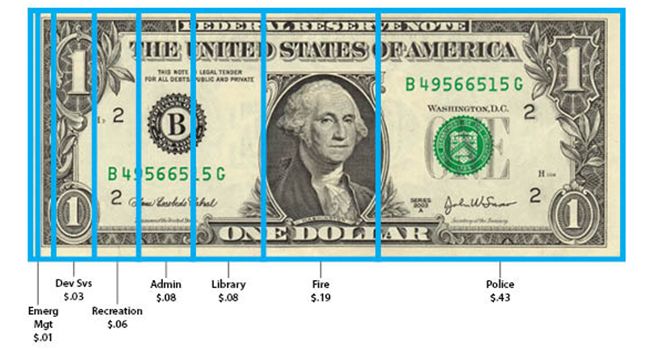 This graph shows how much of each dollar in the budget for the General Fund is spent. 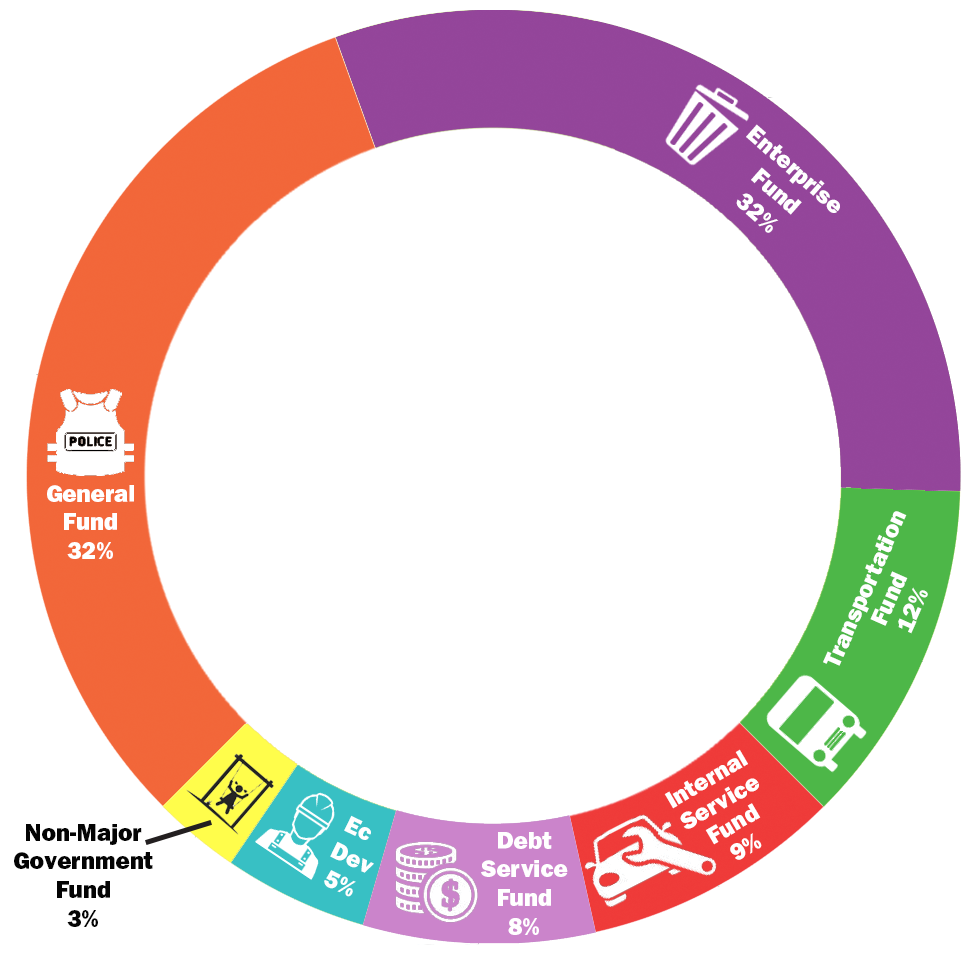 The city’s budget begins with anticipated revenues. These funds are then allocated between funds and departments. This graph shows the allocations of revenue for the City of Scottsbluff.

When a business has bills to pay, it’s not normally a complicated process. The money is here, pay the bills there.

For a government agency like the City of Scottsbluff, it’s substantially more complicated, so we asked Scottsbluff Finance Director Liz Hilyard and City Manager Nathan Johnson to give us view of how it works.

In governmental accounting, there is the general fund that’s basically a catch-all for anything that doesn’t fit into any other fund. The general fund is called general because it has the fewest restrictions and strings attached to it. What’s interesting about the general fund is that it includes the biggest departments – police, fire, administration, all the departments that don’t generate revenue on their own.

Then you’ve got your utility funds. The utility funds are self-contained and based on fees – charges for use – water, sewer, storm water. You use the service and you pay for it. All the money from those charges go into those funds and are used for payroll, equipment, operation, overhead, all those department costs. They’re self-contained by nature. They’re reported differently, separately from everything else. Each fund is like a separate business in the regular world.

All the other 14 funds are basically sinking funds for capital improvements. They’re all funded by property tax dollars, and all of that money goes into debt service for when the entity can’t pay cash for a capital project and has to issue debt. That money out of the debt service fund pays for that capital project or they sink money into all these other funds to pay for police cars, bridges or those types of expenses.

The exception to that is the street fund. All tax revenues from the city’s gas tax as well as all sales tax collected from the sale of motor vehicles in the city go into the street fund along with a certain amount of property taxes dedicated to debt service. Street fund dollars can only be used for street projects. The street fund is not a utility fund, but it almost looks and acts like one, other than the source of revenue is taxes. That funding isn’t from a user charge because there are no toll roads or fees to use the roads, but the tax dollars that come in have to be used for that fund. Those dollars cannot go into the utility funds or back into the general fund.

In the city’s general fund, which encompasses eight expense categories, 83% of the revenue stream comes from sales tax (not including motor vehicle sales), The city leases its electrical infrastructure, utility poles and power stations to Nebraska Public Power District and in return receives 13% of NPPD’s charges, contributing another 33% of the general fund revenues (approximately $2.5-3 million per year).

The remainder of the general fund comes from a hotel occupation tax, and smaller items such as fees for extra security provided by the police department, campground fees, pool passes and pool revenue and franchise fees collected from SourceGas and cable TV franchises Spectrum and Allo. The general fund covers everything from police, fire, library, parks, recreation, administration, developmental services and emergency management. For every dollar of expenditures from the general fund, 62 cents goes to police or fire protection.

The unpredictability of cash flow for the general fund presents a challenge when budgeting. The utility funds are more easily estimated based on use and history. Department heads and city officials look at economic indicators and do as much homework as possible, but in the end, it’s an inaccurate science when determining what the income will be. Add to that, once the budget is set, it can’t be changed simply.

“With the general fund, I can’t predict consumer spending,” Hilyard said. “I also can’t predict how much people are going to run their air conditioners in the summer. So, you’re budgeting up against a completely unguaranteed revenue source. You don’t know what’s going to come in and whether there’s going to be a hail storm or whether a Herberger’s is going to leave or all of those things – economic downturn, presidential election – there are so many things that factor into that, and every year you have to budget up against that.”

Every year, city staff and department heads sit down to work out a budget, but the restrictions are always in the forefront of any distribution.

“Every time that I authorize anything, it’s like I have to go back through those levels,” Hilyard said. “Is there a state statute? That’s where you start. Is there a state statute restricting the use of these funds? If that answer is yes, you go one direction, if it’s no, then something else. If state statute allows me to use this money, does city council allow me to use this money? Again, you go through the yes and no process. Is there an administrative restriction that maybe the city manager or myself has put on this or is there a legal restriction or an accounting restriction? ... So, I have to go those three or four layers just to make sure on every one of those. Again, that’s why we meet with all those people and make sure they understand that. You can’t just take property tax dollars that are meant for sinking and use it to pay payroll or for the general fund. It seems like you could, but in government it’s like every one of these funds is its own stand-alone business and they don’t do inter-company loans.”

The city keeps a cash reserve that could potentially keep the city’s departments running for three months in the event of a catastrophe without incurring additional debt. Essentially, it’s a savings account for the city. Over time, city councils and city managers have implemented the cash reserve as a best-practices measure. The city’s reserve does not drop below that three-month threshold without the authorization of the city council.

“As an accountant, you’re conservative by nature, so for me, it’s a good thing,” Hilyard said. “I would rather make sure we have money in those rainy day funds than to say we have this excess cash sitting here and go ahead and budget it into the following year and use it to do whatever with, and then on the flip side when you have an emergency, you don’t have that reserve there. For me, it’s non-negotiable.”

All the restrictions add up to a complicated structure where moving money around and paying the bills isn’t as easy as it might seem.

SPOTLIGHT ON OSHKOSH: Honoring history while looking to the future