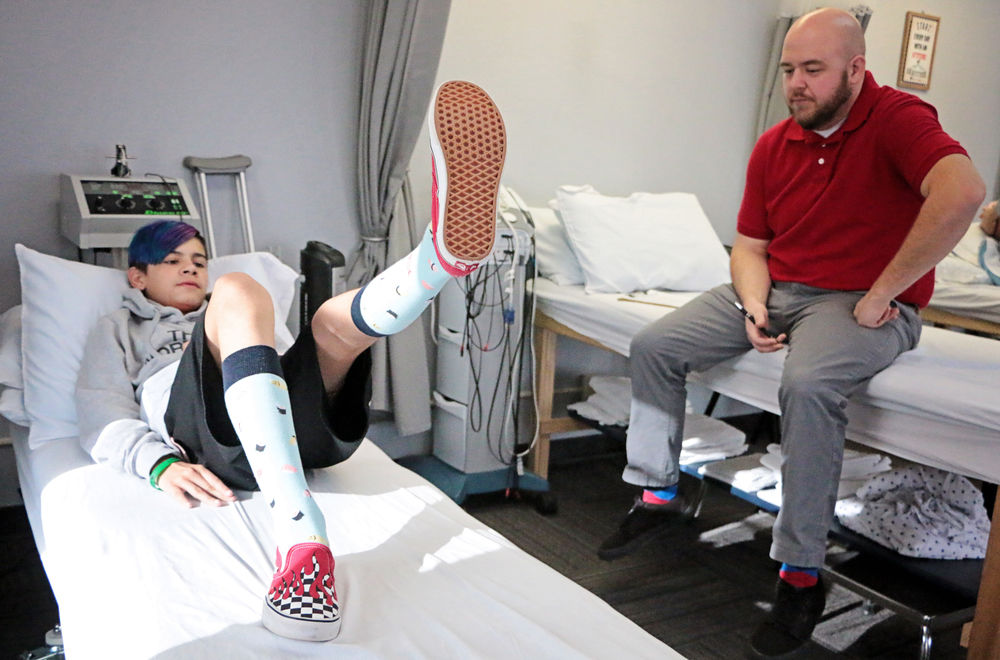 JP Walgren does leg lifts as part of his physical therapy as Ty Hebbert, physical therapist at Bluffs Physical Therapy, advises him during a session last week. The boy is now standing on crutches. 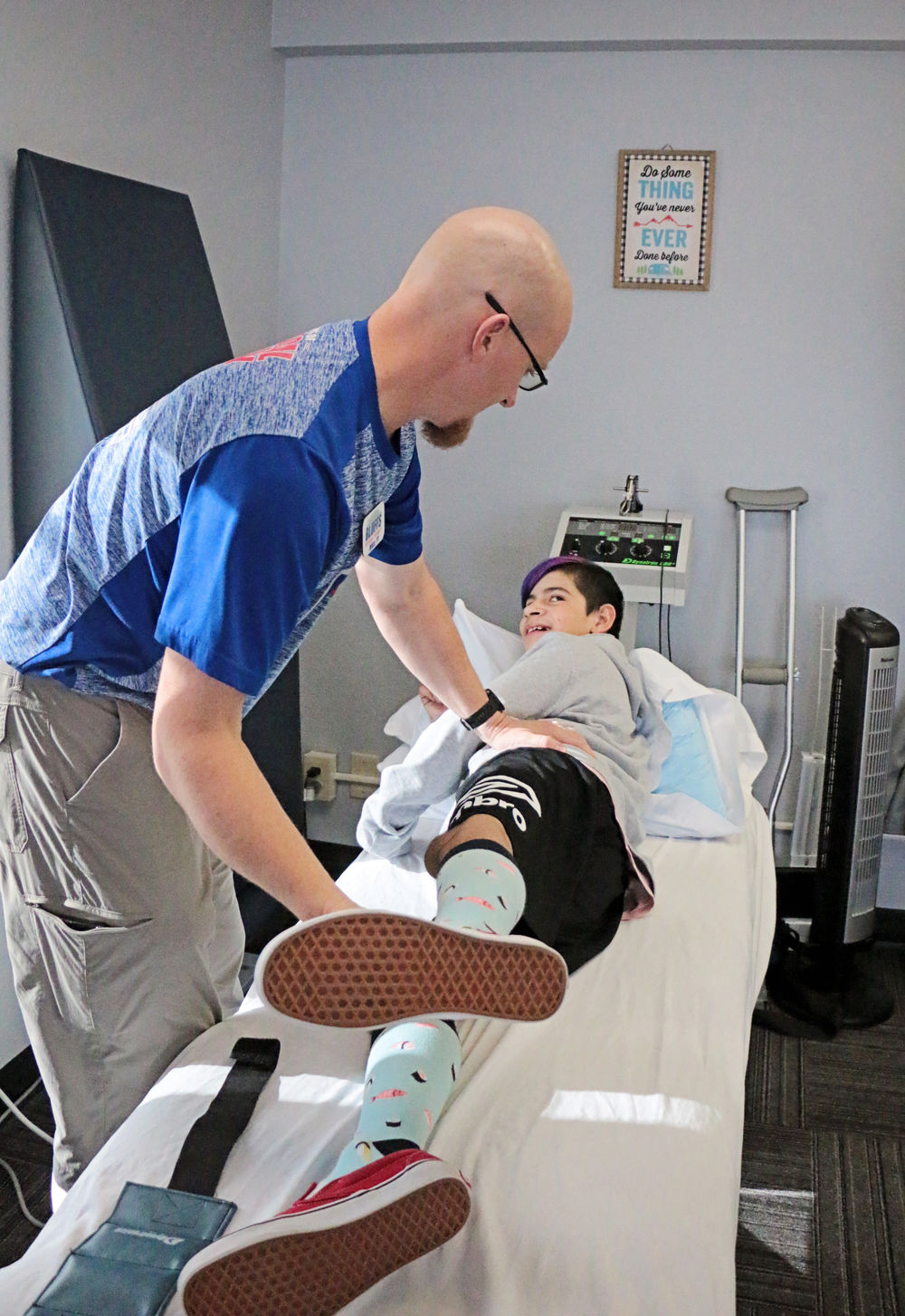 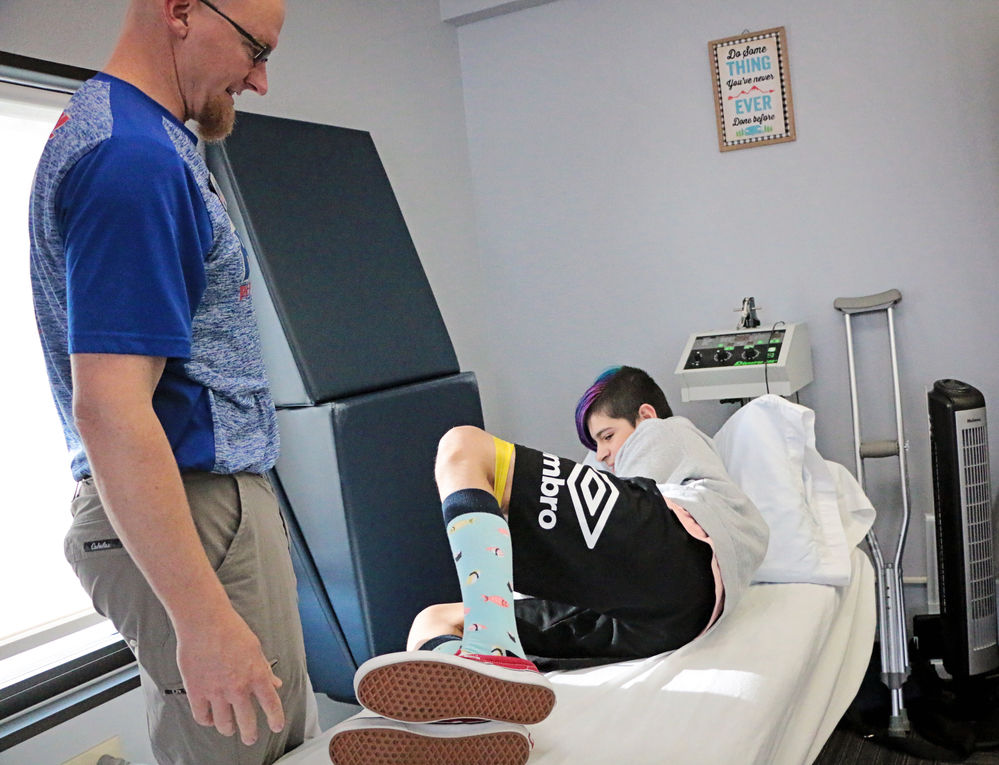 Physical therapist Michael Moravec adds an unexpected surprise to JP Walgren's physical therapy session on Wednesday - a resistance band. At first, JP growns, and then he accepts the challenge. The boy is building up strength as he tries to get back to walking after being injured in a September crash. 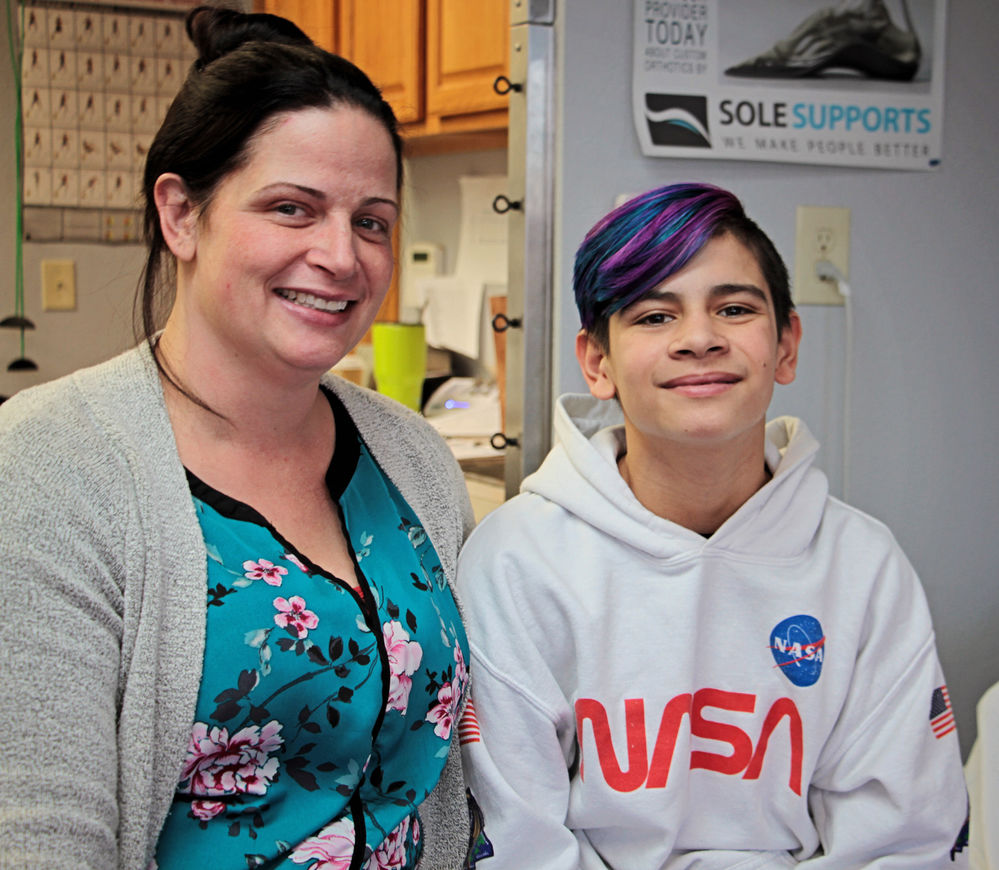 JP Walgren (right) and his mom, Sarah. After being seriousy injured in a car crash in September, JP is in regular physical therapy sessions so that he can regain strength and walk again. Sarah says the family is "putting the pieces together" after the crash.

JP Walgren does leg lifts as part of his physical therapy as Ty Hebbert, physical therapist at Bluffs Physical Therapy, advises him during a session last week. The boy is now standing on crutches.

Physical therapist Michael Moravec adds an unexpected surprise to JP Walgren's physical therapy session on Wednesday - a resistance band. At first, JP growns, and then he accepts the challenge. The boy is building up strength as he tries to get back to walking after being injured in a September crash.

“What are you thankful for?” Bluffs Physical Therapy’s Michael Moravec asks J.P. Walgren during a physical therapy appointment on Wednesday, the day before Thanksgiving.

He’s a 12-year-old boy, offering a pre-teen’s answer and prompting a discussion about what Takis are. Takis are a rolled tortilla chip. JP likes the spicy chips and Moravec agrees. “Takis are the best.’”

It’s one of the light-hearted moments during a physical therapy appointment for JP, who is recovering after he was struck by a driver as he walked to a friend’s home Wednesday, Sept. 18.

One suspects JP’s mom, Sarah, has a different answer to the question, thankful that her son is alive. The boy was seriously injured in a Sept. 18 crash, suffering a crushed pelvis and other injuries. The crash occurred as two men were allegedly racing down Broadway in the early evening hours, shortly before 6 p.m.

JP spent two months in a Colorado hospital and rehabilitation facilities. He’s only been home for about three weeks, returning home on Nov. 9.

Physical therapy appointments are part of JP’s recovery, which is going to take some time.

How much time? It’s uncertain.

At a doctor’s appointment before leaving Colorado, Sarah said, doctors had been concerned because the boy’s pelvic bone had not been healing properly. However, a recent follow-up last week showed it had and the boy could start putting some weight on both of his feet. Physical therapy appointments include strengthening that pelvic area so he can one day walk again.

“Hopefully, we can get to a point where he will not have to use any assistive devices. Two months ago, he couldn’t move, but now he is standing up,” she says as he lifts a pair of crutches. “He won’t be walking on his own soon, but hopefully, he’ll be on one crutch by his next appointment.”

Once JP is ready to return to school, he’ll use a wheelchair, but for now, he’s not returned to school. He’ll start receiving home services after the Thanksgiving break.

The emotional scars from the crash are also healing — for JP and for his mom, though she doesn’t talk about herself much. She acknowledges that “there are a lot of unknowns” right now.

“Being in a vehicle, around vehicles, on sidewalks or in the general area of the accident (which is just a half-block from their home) is not easy for him,” she says of the boy’s struggles. “It has created a big restriction on him.”

JP’s outings have been limited since he got out of the hospital, largely going to appointments. Sarah admits she scheduled a lot of appointments for him to be held after they returned home, and now, she says, she wonders why she thought it’d be so easy to “return to normal life.”

For now, JP and mom are taking every day as it comes.

She and school officials have worked on a plan for him to continue getting schooling. He attended a recent fundraiser and he did well, his mom said. He’s had his friends over, and even went to a sleepover.

The boy’s friends are one of the bright spots.

“They are really loving and really close,” Sarah says of JP’s friends. “It’s a bond. It’s crazy, their connection to each other.”

They have cheered up JP on days that he is feeling down. Even prior to him coming home, friends put together a bracelet fundraiser, and were even recognized for their efforts. One group of girls put together a hot chocolate fundraiser, gathering enough for a gift card for the family. Others have also stepped up with fundraisers and Sarah says, just as she did earlier this month, that the community has been awesome to the family.

“I’m so grateful to our community,” she said. “I could never, never thank them enough.”

After reading and hearing of other crashes involving children struck by vehicles in the area, Sarah said she remains steadfast in wanting to share a message for people to drive safely. Careless driving is a selfish act, she says.

The criminal case involving Jacob Gompert, 22, charged with hitting JP, has been transferred to district court and remains pending trial. He has been charged with second-degree assault, a Class IIA felony; willful reckless driving, a Class III misdemeanor; no valid registration, a Class III misdemeanor; failure to yield to a pedestrian. He has bonded out of jail and is next scheduled to appear in court in three months. Trial has been scheduled in March 2020.

Another young man, Truen Henderson, 24, of Alliance, has also been charged in the crash. Charges against Henderson, the man accused of racing Gompert, were filed on Nov. 18 and he will make his first appearance in court on Dec. 6. Henderson has been charged with reckless driving, second offense, and aiding and abetting second-degree assault, a Class IIA felony. He is accused of driving in excess of 50 miles per hour in a complaint seeking damages filed by Sarah in Scotts Bluff County District Court by attorney Maren Chaloupka.

Fundraisers for the family, which continues to face uncertainty regarding medical expenses as Gompert did not have a license and negotiations continue with insurance and Sarah remains unemployed, have been organized and some are ongoing. ​

The bracelet fundraiser for JP is one of those fundraisers. The bracelets read “Drive smart. Drive safe. We love JP” and it’s hoped it will raise awareness about driving safely, while raising much needed funds for the family.

A donation fund has been set up in JP’s name at Platte Valley Bank and a GoFundMe is online at gofundme.com/f/walgren-family.

What does Martin Luther King Jr. Day mean to you? Community members reflect