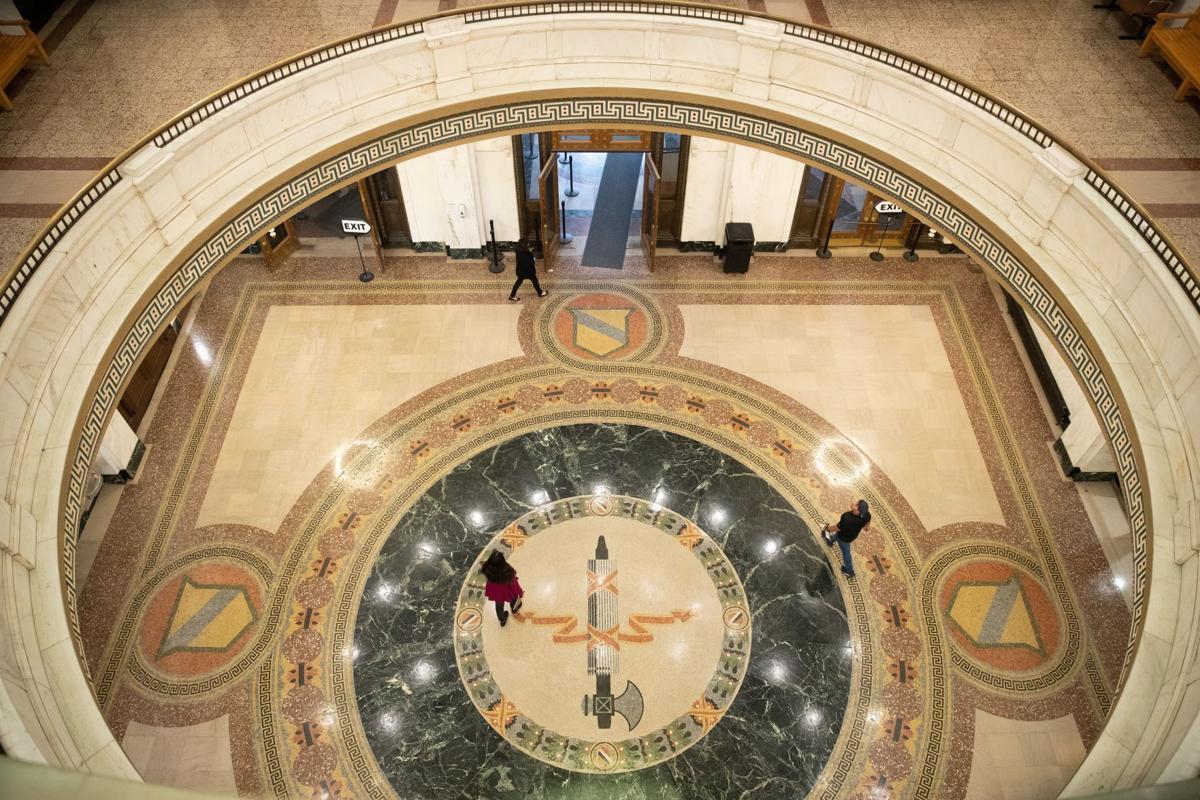 People wait outside courtrooms Tuesday at the Douglas County Courthouse. As of Friday, evictions in Nebraska has not been halted in the wake of the coronavirus. Housing advocates are asking for them to be paused to prevent the spread of the disease and increased homelessness. 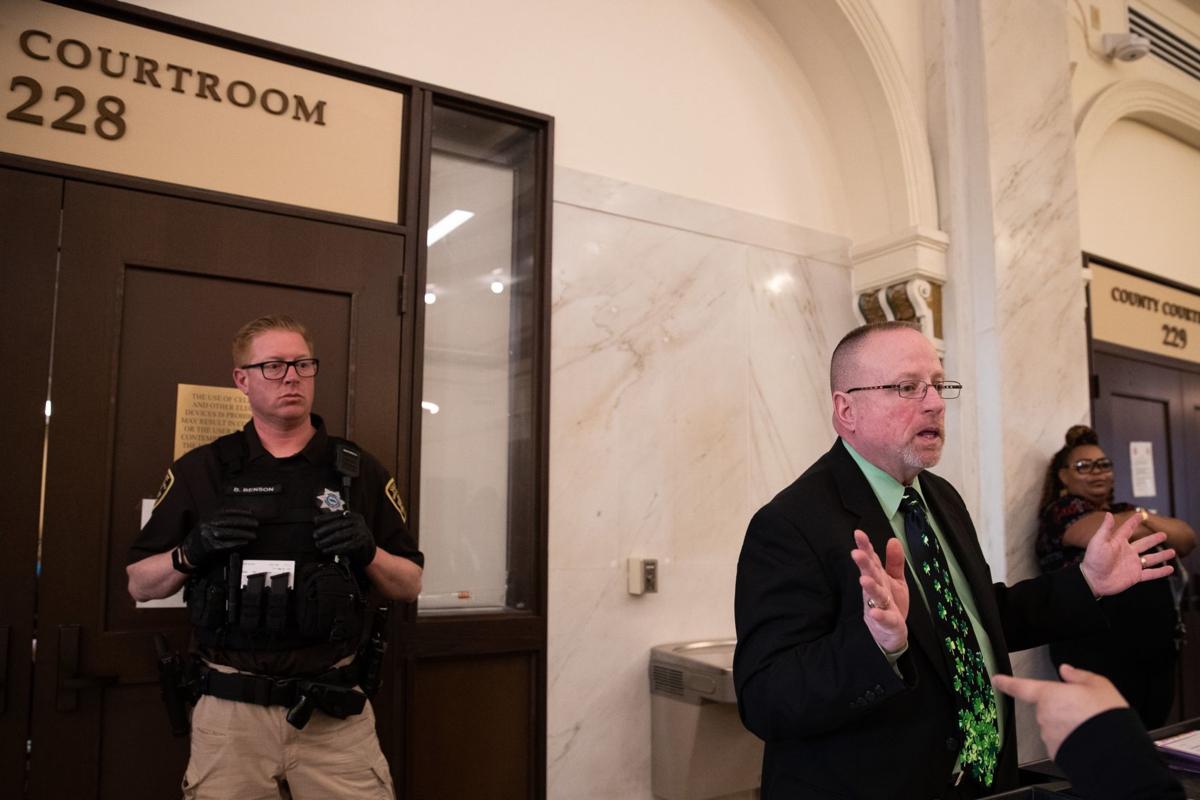 Ron Murtaugh, the Judicial Administrator for Douglas County Court, screens people before they can enter a courtroom at the Douglas County Courthouse. Only defendants and witnesses were allowed inside after Gov. Pete Ricketts called for public gatherings to be limited to 10 or fewer people on Monday to slow the spread of the novel coronavirus.

A couple of attorneys chatted about the pandemic. A few dozen defendants sat in rows of chairs, maintaining distance where they could.

Then Judge Grant Forsberg entered the courtroom, adding another body to the room of 40-plus people.

The coronavirus and crowd limits be damned — eviction court was about to begin.

Even under ordinary circumstances, eviction from one’s home can pose financial, emotional and health threats to people struggling to make ends meet. Add in a global pandemic, with directives to stay home and avoid others, and the challenges compound.

After one man Friday quietly relayed to Forsberg the circumstances that had prevented him from paying rent on his apartment near 72nd Street and Interstate 80, the judge summarized the law in a way that illustrated how narrow the margin is for many tenants.

“If you owe one penny, then a landlord has the right to make you move,” Forsberg said.

Similar scenes in Courtroom 20 at the Omaha-Douglas Civic Center play out four days a week. Housing advocates have counted more than 4,800 evictions annually since 2011 in Douglas County.

Over two dozen local advocacy groups have signed a letter asking Nebraska courts and elected officials in Omaha to suspend eviction and debt-collection proceedings in the wake of a public health crisis that’s creating an economic one. Some other states and municipalities have already done so. Iowa Gov. Kim Reynolds on Friday announced a temporary suspension of some evictions in certain circumstances.

By Friday afternoon, no Nebraska governmental authority had stepped in to offer clear guidance on evictions.

Gov. Pete Ricketts said his office is reviewing who has the power to stop evictions. Omaha City Attorney Paul Kratz said the City Charter does not give Mayor Jean Stothert the power to halt such proceedings.

State Court Administrator Corey Steel has said local courts have authority to say which types of hearings need to happen and which do not. Steel said that Heavican is unlikely to issue a blanket order, but will convene a meeting of attorneys from both sides of the issue to work on alternatives to evictions.

In the meantime, Ricketts said, he hoped that during a public health emergency, “when we are going through so much disruption,” that landlords would not evict anyone.

“Look folks, we’ve got to help our neighbors out,” he said during a Friday press conference. “We’re all going through a lot of tough times, a lot of uncertainty ... so do the right thing.”

Relying on the generosity of landlords didn’t pan out for one man whose case went before Forsberg on Friday. The man said he had through the weekend to gather his belongings from his apartment. Then, if he couldn’t find someone to stay with, he’d consider a shelter for the homeless.

But the man has underlying health conditions — COPD and chronic emphysema — so going to a shelter right now “scares the hell” out of him, he said.

The federal government is narrowly suspending evictions and foreclosures through April. The suspension applies only to homeowners with mortgages insured by the Federal Housing Administration.

Last week, the Metro Omaha Property Owners Association, which represents more than 450 landlords, asked its members to reduce rents by 10% for April and sent a sample letter landlords could use that said, “we know our community is stressed out.”

“Kicking them out is not the answer,” said Rick McDonald, vice president of the association.

McDonald has 23 rental properties in Omaha. He said he expects half his tenants not to be able to make rent because of their types of jobs and layoffs he already knows about.

The eviction process can move so fast — within 10 to 14 days after a tenant is one week late on rent — that tenants have little ability to stop or delay it. Typically if they can’t pay rent on time, they don’t have the resources to find an attorney. Nine out of 10 evictees don’t get lawyers.

Those who manage to get an attorney through Legal Aid, Family Housing Advisory Services or the Creighton University legal clinic still are pinched for time.

Evictions in Omaha happen “exactly where you think” they occur, Fischer said. “In the poorest parts of town. With elementary schools with the highest rates of transfers. Poverty. Lead. You name it.”

But during the public health emergency created by the spread of COVID-19, that churning can become physically dangerous. Tenants who get evicted are thrust onto streets or into homeless shelters or close-quarter scenarios with friends and relatives.

Given the fragility of the economy, with unemployment likely on the rise, Fischer and others predict housing instability will get much worse.

“We can’t make any more people homeless during this pandemic,” said Karen McElroy, a member of Omaha Together One Community, a group that works on housing and other issues. “The immigrants, the refugees, all of our people who are below the poverty line ... I don’t know how they do it now, before this crisis came.”

The federal government is working on plans to send stimulus checks that could help families pay their bills. But one landlord noted that there’s no guarantee that money would be put toward housing costs.

“If you haven’t worked for two weeks, you’re buying corn and toilet paper and diapers,” said Meghann Youngblood, who runs a family property business. “Rent is the last thing on your mind.”

Some housing advocates are talking about rent freezes as a way to help tenants stay in their dwellings.

But it’s a complicated situation: How would rent freezes work for landlords who still have mortgages to pay?

On Wednesday, Youngblood laid off her two office workers in anticipation of the downturn. Meanwhile, her maintenance workers are afraid that a call to fix a renter’s leaky sink or broken refrigerator could expose them to the coronavirus.

Youngblood’s business, The Homesteads Group, owns 180 rentals or homes for sale in Pottawattamie and Mills Counties in Iowa. Rents range from $595 to $1,200 per month.

“I don’t plan on doing any corona-related evictions,” she said. “I told them pay what you can, we’ll keep working with you. I don’t know if other landlords will be that accommodating.”

If courts close for weeks or months, Youngblood is worried that it will be harder to evict problem tenants who are breaking the law or destroying property, or recoup money from renters who were late on rent before the coronavirus outbreak began. Ten of her tenants are already past-due on March rent.

But evictions are expensive — Youngblood estimates it costs her $3,000 to $4,000 each — and she doubts there will be many people looking to move this spring.

Even larger Omaha landlords, including the Seldin Group and Dave Paladino, did not return calls for comment.

Chris Foster, who owns 10 rental properties in Omaha’s Gifford Park neighborhood, said smaller landlords like him may have less access to lines of credit or have repair projects they’re still paying off, compared with larger companies that manage thousands of units.

Still, Foster acknowledged, “probably in most cases landlords are in a better situation and can weather the storm better” than their tenants.

Foster said he’d prefer to see landlords and tenants work out issues themselves, instead of a sweeping eviction ban or rent freeze.

“At least with my renters, it’s a long-term thing,” he said. “It’s kind of the cliché — we’re all in this together.”

Ricketts: April will be another 'tough month' for Nebraska