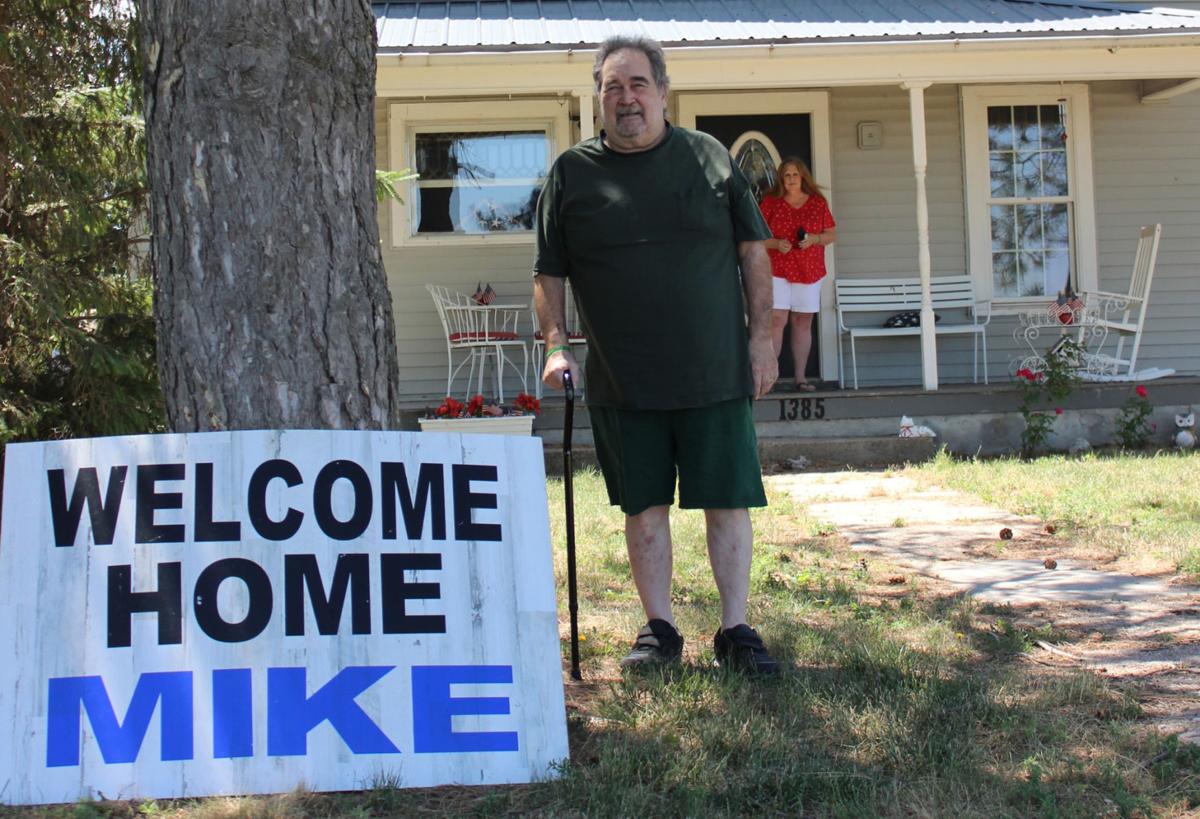 Mike Markvicka’s daughter, Jennifer, put up three signs to welcome her father back to their farm west of St. Paul. Behind him is his wife, Diana. (Independent/Jeff Bahr) 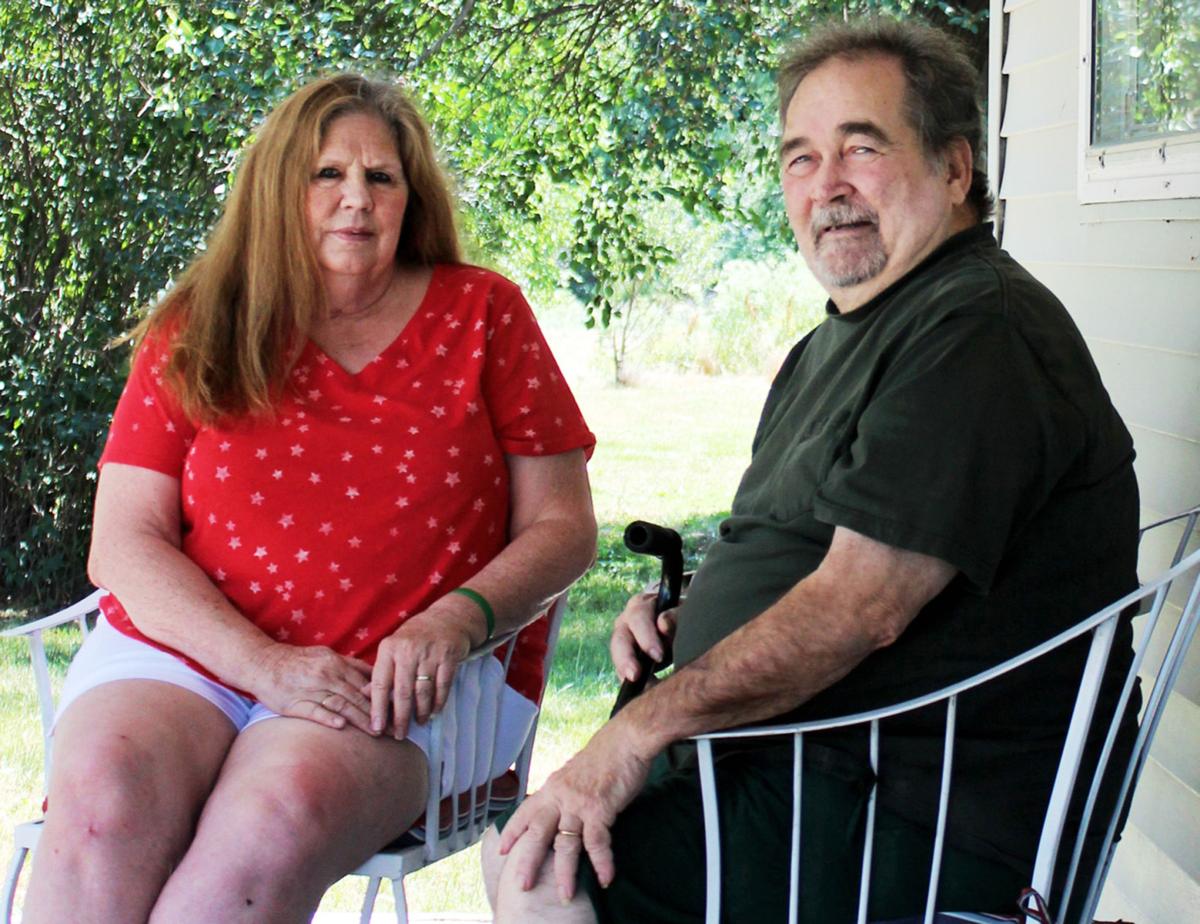 Mike Markvicka, who survived a battle with COVID-19, is glad to be back at his home west of St. Paul, where he lives with his wife, Diana. (Independent/Jeff Bahr)

Mike Markvicka’s daughter, Jennifer, put up three signs to welcome her father back to their farm west of St. Paul. Behind him is his wife, Diana. (Independent/Jeff Bahr)

Mike Markvicka, who survived a battle with COVID-19, is glad to be back at his home west of St. Paul, where he lives with his wife, Diana. (Independent/Jeff Bahr)

ST. PAUL — When Mike Markvicka went into the hospital in mid-April, the trees hadn’t yet budded. When he finally arrived home last week, the corn was 3 feet high and the trees were covered with leaves.

After 65 days in a Lincoln hospital, Markvicka is thrilled to be home and on his way back to full strength.

Markvicka survived a very tough battle with COVID-19. During his long stretch at Bryan Medical Center West, he was in a drug-induced coma, hooked to a ventilator, for three weeks. Doctors told his wife, Diana, that “if my heart quit, they weren’t going to revive me,” he said.

For a while, Diana was reluctant to answer the phone. She was afraid the call would bring bad news.

In early April, Markvicka became the first Howard County resident to be infected with the virus.

He was supposed to go home the following day. But a friend who lives in Omaha took him home a day early.

St Paul police and firefighters were going to give Markvicka an escort to his farm. “But he ruined all that,” Diana said, smiling.

Diana hadn’t been able to visit her husband in Lincoln because she had the coronavirus herself. She didn’t require hospitalization, but she was plenty weak.

On June 16, Markvicka walked into his home, surprising his wife, his mother, his daughter and his three grandsons. The hugs told him how much they’d missed him.

On Sunday, area residents saluted Markvicka with a drive-by parade in front of their home. Four semi-truck drivers were among the motorists who honked their horns in honor of the returning hero.

The best thing about being home is “seeing people I know that missed me,” he says.

He can’t say anything bad about the nurses and doctors in Lincoln. “But it’s not like being home,” he said.

He was given the convalescent serum on a Saturday. “And by the following week, I can’t remember what day it was, he started opening his eyes and coming off that vent,” Diana said.

She said he also benefited from prayer chains.

Churches in St. Paul, Loup City, Dannebrog and Ashton were praying for Markvicka.

Prayers were offered by “all of our neighbors and friends — everybody,” Diana said.

She had a priest give healing rites to her husband when he was on the ventilator.

Diana had read that in New York, 80% of those who went on ventilators didn’t make it.

He husband has chronic obstructive pulmonary disease, and his age and having diabetes didn’t help. “It was all against him,” she said.

When Markvicka came out of his coma, he didn’t know what city he was in. He thought he might be in Columbus, because one of his nurses reminded him of a cousin, or at a nursing home in Palmer.

“He also thought it was October,” she said.

Markvicka is better now. But some of the days in the hospital were tough.

“I was really depressed for a while,” he said.

He felt helpless, because someone had to help him get out of bed, go to the bathroom and take a shower.

One day, a therapist got him seated up on the bed. “My feet were hanging from the bed. And it took three people to hold me up.” Without their support, he would have fallen backward. “I didn’t have any muscles,” he said.

Toward the end of his stay, he was moved to Select Specialty Hospital, which is on the Bryan West campus.

For now, Markvicka uses a cane and a walker. Occupational therapists, physical therapists and nurses come to his house to help him improve.

His 88-year-old mother, Vange Obermiller, was finally able to see her son on June 14.

Nurses and doctors kept Diana up to date over the phone.

She says her husband “got wonderful care down there.”

Markvicka, who lost 30 pounds in the hospital, is looking forward to going fishing with a friend. He also wants to get behind the wheel of a semi. He drives a truck part-time.

“And he beat that. So I told them down there he’s a fighter,” Diana said.

She urged the people at the Lincoln hospital, “don’t let him die.”