Read through the obituaries published today in Scottsbluff Star-Herald Online. 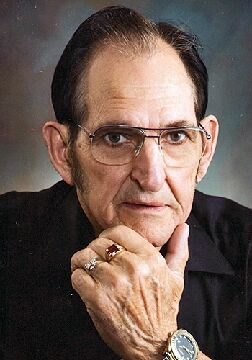 Bob L. Henkel passed away in his home in Scottsbluff, Nebraska on May 28, 2020 due to COPD.

He was 86 years old. Bob was cremated per his wishes and a private service was held at the Fairview Cemetery.

He was born to Henry Henkel and Mary Foltz Henkel in Meriden, Wyoming on April 18, 1934. He was the 3rd of 4 children. He married Marlene Baum on March 28, 1954. They had two children, Steve Henkel (Annette) of Alliance, NE and Laurie Henkel of Fort Collins, CO. Bob was well known in the machinists and welding services in the valley for 62 years. He started his career with Petzold Engineering in 1955 gaining experience and knowledge in machine work, fabrication, welding and installation and maintenance of elevators. In 1962 he opened his own business, Central Machine Works, and had the motto, "If it can be fixed, we can fix it". Bob maintained that belief and work ethic throughout his life. In 1976 he became a partner in Water-Flo Industries. Their main focus was on building and repairing centrifugal irrigation pumps.

He established Henkel's Machine and Welding on the Scottsbluff Beltline in 1995. After providing service in the Panhandle he retired from the industry at 83 years of age in 2017. Bob took great pride in his workmanship. Among some of his most interesting projects were the removal, repair and installation of the large needle valves which controlled the flow of water on the outlet at Lake Minatare. The most complex project was designing and engineering the butterfly valve controlling the opening and shutting of the gates at Lake Minatare which was located through an underground tunnel 100' under the dam. Hobbies included stockcar racing (#4) hunting, fishing, bowling, gambling and watching football and baseball. Bob Henkel will be remembered by many friends, former employees, and customers. And will be sadly missed by his family.

He was preceded in death by his parents, Henry and Mary Henkel, his sister, Betty Schwartkopf and his brother, Sonny Henkel (Mildred).

Alvin Barta passed away peacefully May 31, 2020 in Lincoln Nebraska. He was 97. The graveside service will be at 1:00 pm (mountain time) on Saturday, June 6, 2020 at the Hemingford Cemetery in Hemingford, NE. The public is invited but encouraged to wear face masks and practice social distancing. www.bmlfh.com