CLINTON, Md. - When Mónica Hernández told her husband that her 2019 New Year's resolution was to go back to work, he was surprised. He kept asking her whether that's what she really wanted to do. She had been out of the workforce for a year after a difficult pregnancy and the birth of their first child.

"I want to put my brain to use," Hernández told her husband. "Now my son is here, and it makes me want to do even more."

Hernández, 28, landed a job this spring as a part-time receptionist at Impressions Pediatric Therapy in Maryland, making her part of a surge of Hispanic and African American women who are entering the workforce amid one of the hottest labor markets in U.S. history.

Today, she earns $15 an hour, a big jump from the $9-an-hour cashier jobs she once thought would be her working life. Clients like that Hernández is bilingual, and the owner of the fast-growing therapy practice just offered her a full-time position.

The surge of minority women getting jobs has helped push the U.S. workforce across a historic threshold. For the first time, most new hires of prime working age (25 to 54) are people of color, according to a Washington Post analysis of data the Labor Department began collecting in the 1970s. Minority hires overtook white hires last year. 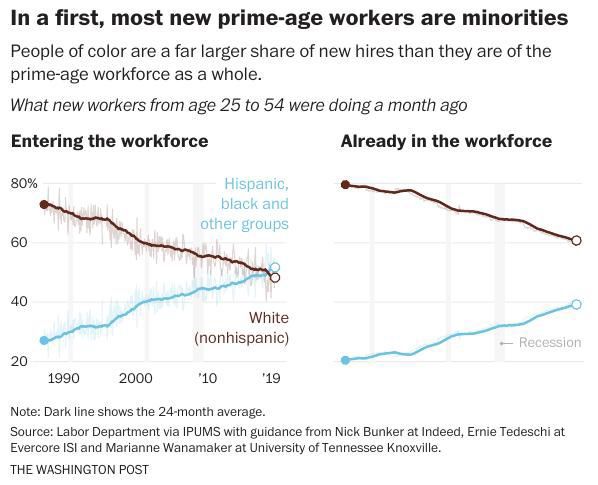 Women are predominantly driving this trend, which is so powerful that even many women who weren't thinking about working - because they were in school, caring for kids or at home for other reasons - are being lured into employment, according to The Post's analysis.

Minority women began to pour into the labor market in 2015, and they have begun to reshape the demographics of the U.S. workforce, especially because many white baby boomers have been retiring. There are 5.2 million more people in the United States with jobs than at the end of 2016, and 4.5 million of them are minorities, according to The Post's analysis of Labor Department data.

Now, the question is whether minority groups will hold on to these gains as the economy shows signs of fraying. Job growth is slowing this year, the Labor Department reported Friday, giving rise to fears that a trade war and global economic slowdown that have already hit U.S. economic growth could begin to restrict hiring.

President Donald Trump frequently celebrates the recent record lows in the Hispanic and African American unemployment rates, one of his favorite talking points as he makes the economy a central argument for re-election.

"We've seen a lot of gains in employment among lower-income and lower-education groups," said Marianne Wanamaker, an economist and former member of Trump's Council of Economic Advisers. "But it is precisely those groups that are vulnerable to layoffs if economic activity slows."

Politicians and top policymakers, including at the Federal Reserve, say it's critical to keep this economic expansion going so more Americans can get jobs - and build financial security. And it's especially critical for many minority families, who usually earn less and have far less wealth than whites.

"People who live and work in low- and middle-income communities tell us that this job market is the best anyone can recall," Fed Chairman Jerome Powell said in a speech last month in Jackson, Wyoming. "Our challenge now is to do what monetary policy can do to sustain the expansion so that the benefits of the strong jobs market extend to more of those still left behind." 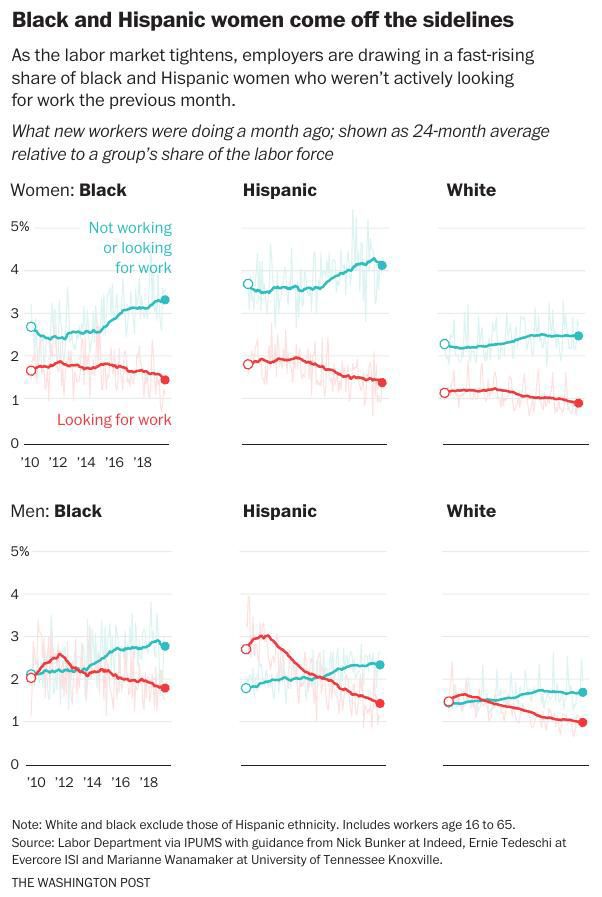 Economists say the minority hiring boom is explained mainly by a tight labor market that is forcing employers to look beyond their normal pool of candidates. But interviews with more than 30 new hires, their managers and caseworkers who help people find jobs suggest other forces, such as cultural attitudes and educational attainment, are pushing up the supply of minority women in the work world.

Many Latino women today say their families encourage them to work outside the home, a major change from when their mothers and grandmothers were expected to remain home with kids.

"Culturally, our role was to stay home and take care of the children," said Frances Villagran-Glover, vice president of student services at Northern Virginia Community College, which has seen Hispanic enrollment double in the past decade. "But that mind-set is changing. And as women go into the workforce, they see opportunities for leadership and growth."

Villagran-Glover and other experts say more women are also getting jobs because families need two incomes to pay rent and other bills. Minority women over age 45 have been some of the biggest job gainers now that their children are older.

Deportation efforts by the Obama and Trump administrations may also be a factor causing more females to seek employment. More than 90 percent of U.S. Immigration and Customs Enforcement arrests are of men, according to the Migration Policy Institute.

"We see women entering the workforce because their husbands may no longer be in the country," said Samantha Sherman, chief program officer at Wesley Community Center in Houston that offers employment coaching.

Four years ago, Milagros Tasayco immigrated to Manassas, Virginia, from Peru with her family after she was able to get a green card. She knew almost no English and stayed home with her two children while her husband, an American citizen, ran a mechanic shop.

Another mom at the school bus stop told her about low-cost English classes at Hogar Immigrant Services, a community center in a Manassas strip mall that's run by Catholic Charities of the Diocese of Arlington.

Tasayco, 49, enrolled in the beginners course and eventually branched out to computer classes, a CPR course and a certificate program in child development offered by Hogar and Penn State Extension's Better Kid Care. As Tayasco's English improved, her husband's health deteriorated. He was diagnosed with Parkinson's. Ultimately, he had to close his business.

Tasayco, a former social worker in Peru who hadn't worked in years, had to become her family's breadwinner. She found a job in summer 2018 at Macy's, stocking shelves for $9 an hour, but she longed to work with children again. In the spring, with the help of Hogar, she got a job as an recreational aid in the preschool classroom at Manassas Park Community Center for $10 an hour.

"Now there are more job opportunities, I think. I look for jobs that want English and Spanish speakers," said Tasayco, who spends her mornings at the community center and her afternoons at a private day care. "My children say, 'Wow Mommy, you have two jobs!' My husband is proud, too."

Job postings containing terms such as "fluent in Spanish," "Spanish required" or "Spanish preferred" have nearly doubled since 2017, according to the job site Indeed.

Arely Angel, the lead preschool teacher at the Manassas Park Community Center, liked Tasayco as soon as they met at a job fair. Angel was looking for someone mature who could grow quickly into a leadership role. Tayasco's social work degree and her Spanish were an asset for a school where about half the students are bilingual or speak Spanish as a first language.

Tayasco's family is no longer on food stamps, but it still struggles. Angel has urged the woman to earn additional qualifications.

"I want to learn to be a nurse to help children more and maybe get a better job," Tasayco said. "I love working with kids."

More than any other population, Latinos made huge strides to further their education when jobs were scarce after the Great Recession, making them more attractive to employers.

About 72 percent of Hispanic Americans over age 25 have high school diplomas, up from 59 percent in 2006, according to the Education Department. And college enrollment among Hispanics has tripled since 1996.

Hernández credits the Training Source, a Maryland nonprofit, for transforming her life. She was unemployed from 2014 to 2016. Despite sending out résumés daily, she couldn't get past the phone interview stage.

As she browsed Indeed for cashier and barista jobs - anything that didn't list strict qualifications beyond her high school degree - an ad popped up offering free certified nursing assistant (CNA) training near her home in Clinton. She feared it was a scam, but she dialed the number and connected with the Training Source, which helped her acquire everything from a CNA license to an interview-appropriate wardrobe.

"I still have my notes from the professionalism course they provided," Hernández said. "They taught me how to be more confident and outgoing."

The Training Source has been around for more than 25 years, but it only started offering a course for people to obtain geriatric nursing assistant (GNA) and CNA licenses in 2014. The program is free because of a state government grant, one that could be on the chopping block in a recession.

Companies and labor unions have also stepped up their outreach to minorities and have their own training programs. Labor Department figures show employers started 3,229 new apprenticeship programs last year - almost double the rate in 2016. Part of the jump may be due to companies feeling the need to grow talent from within and the Trump administration's push to formally register apprenticeship programs.

Suriana Rodriguez, 19, is earning about $40,000 a year as an apprentice lab technician in IBM's office in Poughkeepsie, New York, a step on the career ladder that her family members say wouldn't have been available at their Mexican restaurant.

Last year, she graduated with both a high school diploma and associate degree, part of a new program IBM helped create eight years ago called P-Tech (Pathway to Technology Early College High School), which aims to get more people from disadvantaged backgrounds into tech. This fall, 93,000 students in 10 states are enrolled in P-Tech programs.

"I want to make my family proud, especially my mom," said Rodriguez, who is the first in her family to earn a college degree and was just offered a full-time IBM job with higher pay. "My mom took a chance on bringing me to the United States at such a young age."

On graduation day, Rodriguez's mother brought her blue and gold balloons, telling her they symbolized how she could "go beyond the sky." For Rodriguez, the main hurdle now is that she's part of the Deferred Action for Childhood Arrivals (DACA) immigration program, which Congress and the Trump administration have left in limbo.

These women - Rodriguez, Hernández and Tasayco - were not in the workforce three years ago. They credit local programs with helping them launch new careers. They have been telling their sisters and friends to also get credentials to open doors to better-paying jobs, but they know the programs they went through have limited spots - and funding can evaporate at any time.

"I try to advise my peers to take a risk and get out there," Hernández said. "I have a CNA title under my name. I am proud of it. I'm moving in the right direction."