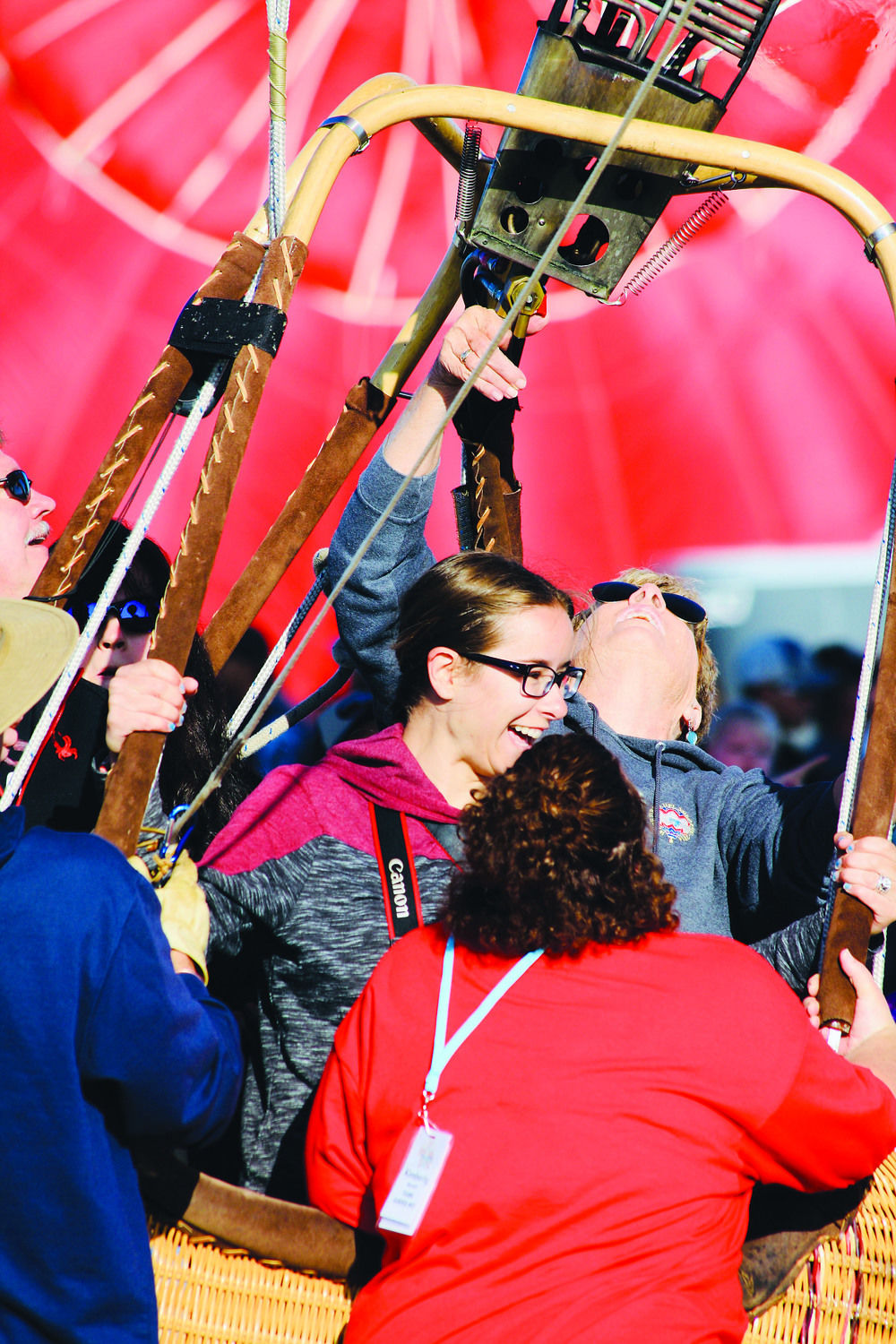 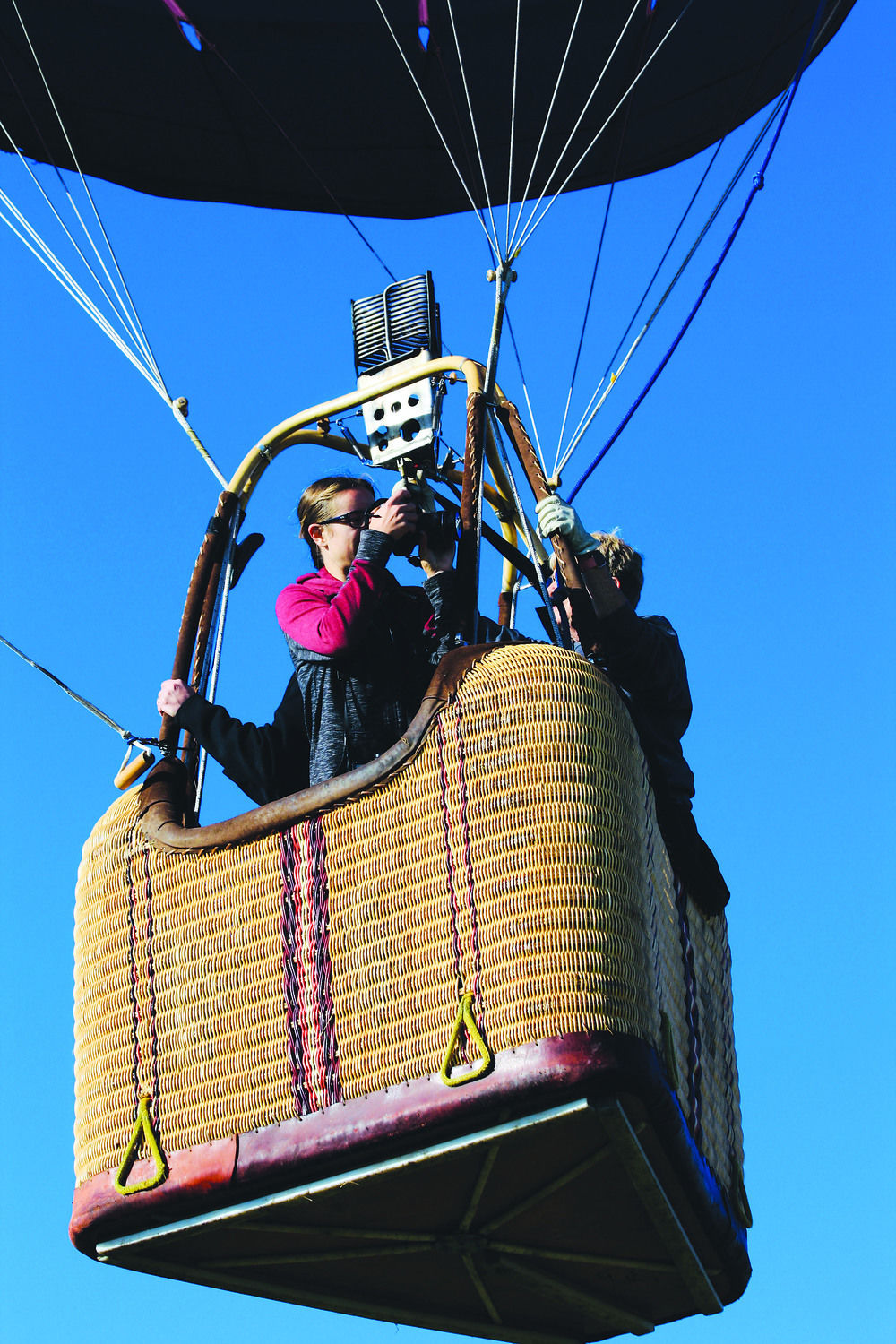 I laid with my head in the weeds and closed my eyes as I tried to recapture my breath.

Saturday was the final day of the Old West Balloon Fest and I had been looking forward to this day all week. While I chased the national pilots around the county, I was hoping to go up in a balloon to capture a new perspective of the event.

Weather had been a factor every day as the pilots took to the skies to complete tasks and the weather again proved a challenge Saturday morning. Just as the Old West Balloon Fest pilots found their launch locations at the Mitchell Air Field, fog rolled through the area. After a short delay, the skies cleared and it was time to inflate.

With neon orange gloves on, I helped Patricia Newlin inflate the envelope by pulling out the fabric bunched up on the ground to ensure the envelope was fully cold inflated before she started the hot air inflation. Once the basket stood up, all I wanted to do was get into the air, so I could photograph the mass ascension of balloons. But by the time Newlin waited for the envelope to stabilize, rather than rocking back and forth, most of the other pilots were up.

As we ascended over the air field, we could see the Old West Balloon Fest balloons to our east and the national pilots coming toward us from the west. The ground fog, that delayed our launch, was to the northeast and the balloons seemed to float on top of the clouds. The picture was so serene and breathtaking, I didn’t know which way to take pictures.

Just as I began taking in the view, I noticed the wind picked up, causing us to catch up to other balloons. Then we noticed several balloons were losing altitude in front of us. We were completing a Hare and Hound task, so as pilots approached the hare balloon, they threw a baggie out toward the X. As we approached the target, Brian Christeleit threw a baggie toward the target.

After completing the task, our attention turned to finding a landing location. Looking down at the target site, Newlin said we would have a high speed landing since other balloons were laid flat out in the field south of the X. While we made our descent, we looked for power lines or trees that posed hazardous to ensure Newlin had time to adjust our altitude. With an empty field below us, we were instructed to bend our knees and hold on in two places. Just as we reached the top of the trees, Newell instructed everyone to hold on but before we had a chance to get down, the basket hit the ground, throwing me forward and flipping my eye glasses off into the field. We hopped before hitting the ground again, being thrown back and forth inside the basket. The final hop resulted in the basket dragging on its side for several feet as the envelope pulled us east.

The image of weeds flying under the basket ran through my mind for what seemed like hours.

Then the basket hit a row of dirt and stopped.

With one camera pushing into my upper stomach and another tucked under my left arm, I tried to catch my breath. Three other passengers laid on top of me as I looked out into the field.

All I wanted was to get out of the basket.

Newlin asked if everyone was OK and said she needed to climb out before the rest of us could to deflate the envelope and ensure we could safely get out. Once Jodi and Brian Christeleit were out, Brian picked me up to help me out. We walked away from the basket in search of my glasses when Christeleit looked at his knee, which had gone through the basket and was beginning to swell. Seeing his injuries, I became worried. With aches and pains in my back and shoulder and a swirling sensation in my head, I decided I needed to rest so my body could recoup, but it wasn’t until Monday I learned the landing gave me a concussion.

Nurses informed me our balloon group was not the only ones injured. Some people suffered broken ankles and feet, so I counted my blessings.

The past week had been a great educational experience about ballooning. While the crash may sting for awhile, the flight took my breath away.

EDITOR’S NOTE: Lauren’s crash was a little harder than first thought. She is out with a severe concussion and will return to work on Sept. 5. She is missed and we encourage you to keep her in your thoughts and prayers.

MATTHEW HANSEN: Our preschoolers can help end racism, if we help them first