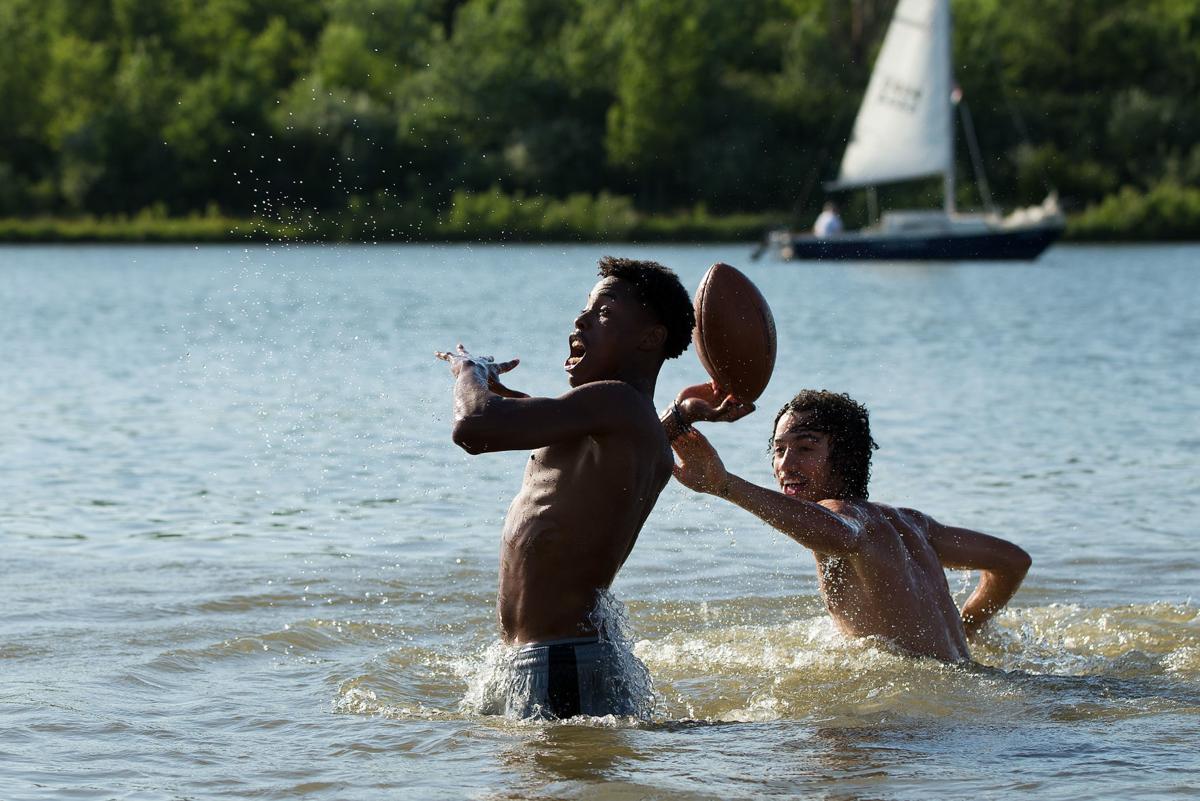 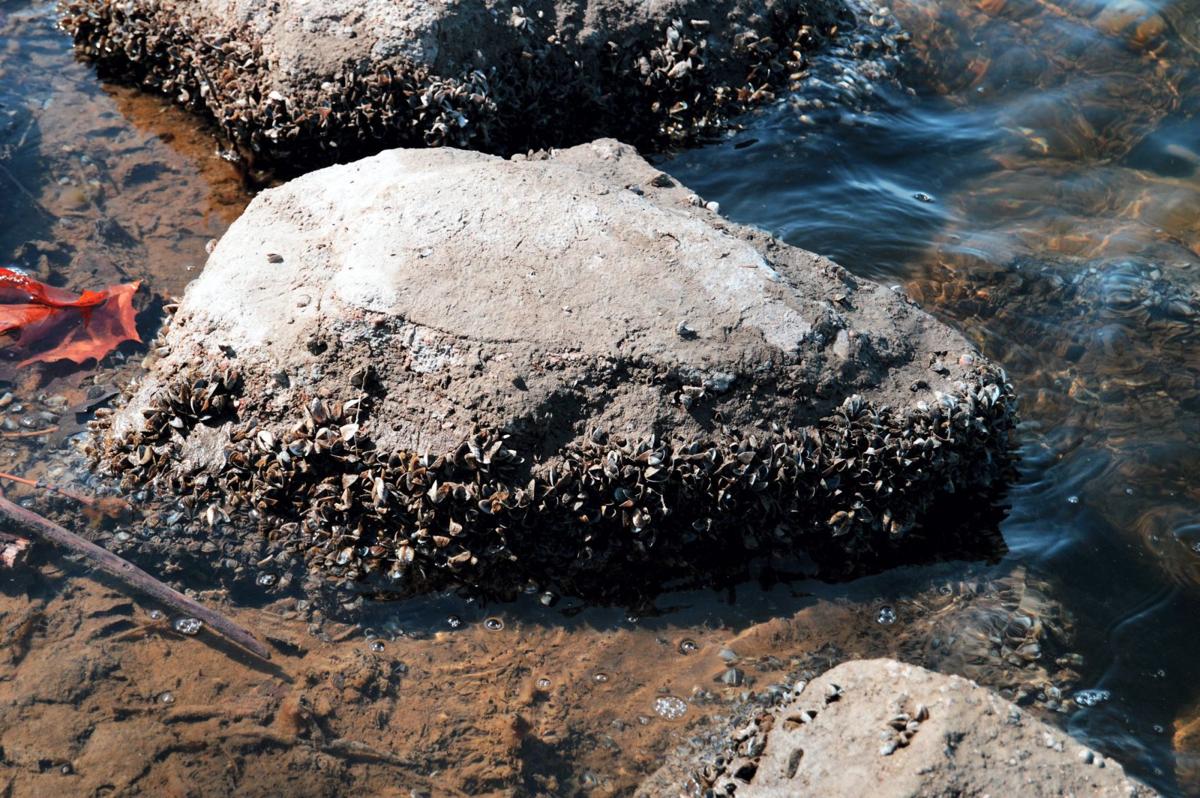 The invasive zebra mussels, on these rocks, have no large-scale natural predators in North America.

The invasive zebra mussels, on these rocks, have no large-scale natural predators in North America.

The park at Cunningham Lake would be closed to visitors and the lake would be drained this fall under a plan for killing off invasive species there.

The goal of draining the lake is to kill off two aggressive foreign species, the zebra mussel and the common carp. If the carp and mussels aren’t killed off, a report says, the two species are likely to destroy the lake’s entire fishery.

Additionally, the mussels have the potential to multiply by the millions, adhering to docks and pipes and littering the shoreline with their knife-edged shells.

The U.S. Army Corps of Engineers has released a 25-page environmental assessment of options.

The corps’ analysis estimates that the park would be closed for six months. Cunningham’s woods and grassy areas are popular with dog-walkers, joggers, horseback riders, picnickers and disc golfers.

The corps is taking public comment until Oct. 17. The corps, the Nebraska Game and Parks Commission and the City of Omaha will finalize their decision after that.

“I don’t see any reason why we wouldn’t (drain the lake) at this point,” Jeff Jackson, southeast district fisheries manager at Game and Parks, said Thursday.

Closing the entire park is a change from past practices. In 2010, when Zorinsky Lake was drained to kill off zebra mussels, the park around it remained open.

And in 2006, when Cunningham was drained to allow for an extensive resculpting of the lake bed and banks, most of the park remained open.

Jackson and Angel Pletka, natural resources specialist for the corps, said the decision to close the park itself is largely the city’s. The corps owns the lake, and the city manages the park around it.

“We’re definitely in discussions about that,” he said. “For us it’s strictly a safety issue.”

After Cunningham was drained in 2006, workers pulled about 500 pairs of shoes left by people who’d ventured into the mucky lake bed, Bench said. And at least one four-wheeler got stuck in mud. Also of concern is the risk for people to fall through unstable ice shelves that could form this winter, Bench said.

”We don’t want kids getting hurt, going where they shouldn’t be, or four-wheelers getting stuck,” Bench said.

Another reason to close the park and lake is to minimize the chance that anglers or others will salvage fish and, by doing so, inadvertently transport the zebra mussel or its larvae to other lakes, Jackson said.

Also in the works is a companion plan to simultaneously drain Lonergan Lake, a private reservoir upstream of Cunningham. Officials think carp from Lonergan flushed down the Little Papillion Creek into Cunningham during high water.

The logic behind draining the lake in the fall is that it will expose the mussels to winter’s drying and freezing weather, with the hope that doing so will kill most of them. Once the lake is drained, remaining pools would be treated with the chemical poison Rotenone.

A wide variety of aquatic life would be killed off in the draining, freezing and chemical treatment, the corps’ report said. Additionally, some large animals that venture into the deep mud, deer for example, could become stuck and die.

Those are among the negatives listed in the analysis. Others include the likelihood of noxious odors as fish and vegetation decay, and the unpleasant views for adjacent property owners.

The corps concluded that the negatives would be short-lived and that aquatic life and mammals large and small would return once the lake is refilled. With normal rainfall, the lake would probably take a year to refill, the corps estimated.

Draining a lake doesn’t guarantee success. It might be possible for mussels to survive in watery nooks that don’t freeze or get poisoned. Boaters and anglers can reintroduce the species.

Larval forms of zebra mussels were found in Zorinsky several years after it was drained in 2010. Testing detected the larval forms in 2016 but subsequent tests haven’t found any, Pletka said.

Unlike the $4.5 million renovation of Cunningham in 2006, little cost is expected with this work. The only cost listed in the corps’ plan is $12,000 for Rotenone.

Jackson said the larger goal of draining lakes like Cunningham and Zorinsky is to protect the rest of Nebraska’s major lakes. At 337 acres, Cunningham is much easier to drain and chemically treat than a lake the size of 1,800-acre Branched Oak, near Lincoln.

“We don’t want the zebra mussel spread throughout the state,” he said. “We’ve been more successful than any other state that I’m aware of, in keeping them isolated.”

Zebra mussels are believed to be native to parts of Europe and Asia and have no large-scale natural predators in North America. The common carp also is native to Europe and Asia. It is regarded as a pest because of its ability to out-compete native fish, but some anglers like it for sport fishing and food.

In the greater Omaha area, adult zebra mussels also have been found in an isolated lake at Offutt Air Force Base, and the larvae of adult mussels have been detected in Carter Lake. The mussels also are found in the Missouri River.

Floodwaters mean duck hunters should be cautious; 'accessibility is going to be very difficult'