Nebraska quarterback Brook Berringer (18) looks for an open receiver against the Miami defense at the FedEx Orange Bowl in Miami, Jan. 1, 1995. Berringer replaced starting quarterback Tommie Frazier in the first quarter. Frazier returned to lead the top-ranked Nebraska to a 24-17 win over Miami. (AP Photo/Lynne Sladky) 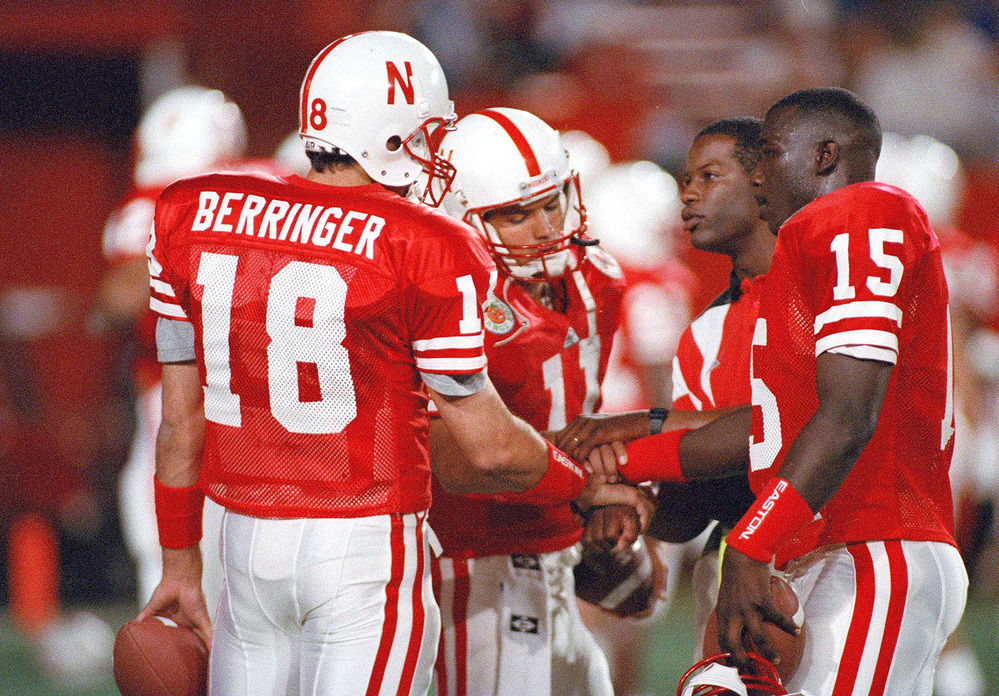 Nebraska quarterbacks Brook Berringer (18), Matt Thurman (11) and Tommie Frazier (15) get together before the start of the FedEx Orange Bowl in Miami, Jan. 1, 1995. Top-ranked Nebraska plays number three Miami. The other player is unidentified.

Nebraska quarterback Brook Berringer (18) looks for an open receiver against the Miami defense at the FedEx Orange Bowl in Miami, Jan. 1, 1995. Berringer replaced starting quarterback Tommie Frazier in the first quarter. Frazier returned to lead the top-ranked Nebraska to a 24-17 win over Miami. (AP Photo/Lynne Sladky)

Nebraska quarterbacks Brook Berringer (18), Matt Thurman (11) and Tommie Frazier (15) get together before the start of the FedEx Orange Bowl in Miami, Jan. 1, 1995. Top-ranked Nebraska plays number three Miami. The other player is unidentified.

Tradition is what drives Nebraska’s nation-leading sellout streak. Relive that tradition with Tom Shatel’s column that ran after the Huskers’ 200th consecutive sellout.

It is a phenomenon. It is a mystery.

This Saturday, Nebraskans will stream into Lincoln and turn Memorial Stadium into the third-largest city in the state for the 200th straight Nebraska football sellout. Who are these people? Why are they here? Will this incredible streak ever end?

I have the secret.

It arrived in the mail a month ago, just after Nebraska’s demolition of Pacific on Sept. 24 before sellout No. 197. It was then that a certain Omaha sports columnist wrote that the mismatch was “the day college football died.” The letter writer wondered aloud who would not only tolerate such exhibitions but stay around to the unglorious end.

The letter said I was wrong.

Steve Bischof, a teacher and football coach at Elkhorn Middle School, requested that I not print his letter. But after I called and pleaded, he agreed to share it. The letter, I said, is a major clue to what makes Big Red football tick.

“I took my son Taylor to the game on Saturday for his eighth birthday. Just like my grandfather took me to Husker games 35 years ago. They weren’t the Big Red back then. The Huskers played teams like South Dakota, and won 56-6. My grandfather and I stayed to the very end.

“We watched the marching band come running out of the corners of the end zone. We watched the band form the zig-zag line as the Huskers entered the stadium.

“Sitting in section 103, we watched a Nebraska football game. When the Huskers scored on their first possession, my son watched in amazement as thousands of balloons sailed off over the south end zone. Later he also noticed the solitary balloon that wafted over the crowd as the extra point made the score 49 — 0. ...

“Some things never changed. My son announced the ‘Coca-Cola instant replay’ every time they showed up on the big board. The hot dogs aren’t the same this season, and the popcorn doesn’t come in a cardboard cone that turns into a megaphone. The time is kept on a digital clock instead of the old analog clock face still visible on the side of the field house under the north stadium. My grandfather no longer bellows, ‘Fummmmmblllle,’ from the east stadium. ...”

Bischof, 38, has been going to games “since before I was born.” He used to sleep on the ramp outside Section 5. He remembers getting in free because he wore his Cub Scout uniform. Now, he sits in Section 103 with other members of the Nebraska Coaches Association, who yell “FUMBLE!” out of habit whenever the ball squirts loose. As if the player can hear them.

‘Part of Growing Up’

“There’s a pride in it,” Bischof said Monday. “But it’s also tradition. It’s part of growing up here, part of being a kid in Nebraska.”

There is that corny charm to Nebraska football and the people who have formed this record streak. For so long, the game has been the thing. Only recently has modernization crept in. The stadium, with new video boards and updated concessions, is now “fan friendly.” Skyboxes are on deck. And now the athletic department is beginning to put a price on certain seats. Can The Streak withstand progress?

“When my grandparents took me, there used to be people in back of us who would bring brownies and share them,” Bischof said. “There was a guy sitting around us who laughed like Woody Woodpecker. It would sure be a shame if those people couldn’t make it to games anymore.”

If not them, then somebody will put their money down. Two hundred games have shown us: There will never be a shortage of people willing to put on their Saturday red, drive down Cornhusker Highway and perpetuate the legend. Neither ice, nor the glut of TV games nor the plethora of Husker blowouts has broken up this unique relationship.

That’s because it is a marriage made up of a thousand relationships and many more memories. Bischof’s letter, in closing, put it best:

“Maybe from the press box this game was a ‘big loser.’ But for two guys sitting in section 103, row 8, seats 7 and 8, this was a connection to old traditions and new memories. As we headed back home, another 8-year-old was falling asleep listening to scores on the radio.”

Nebraska in the mix for 2020 junior college corner Nadab Joseph