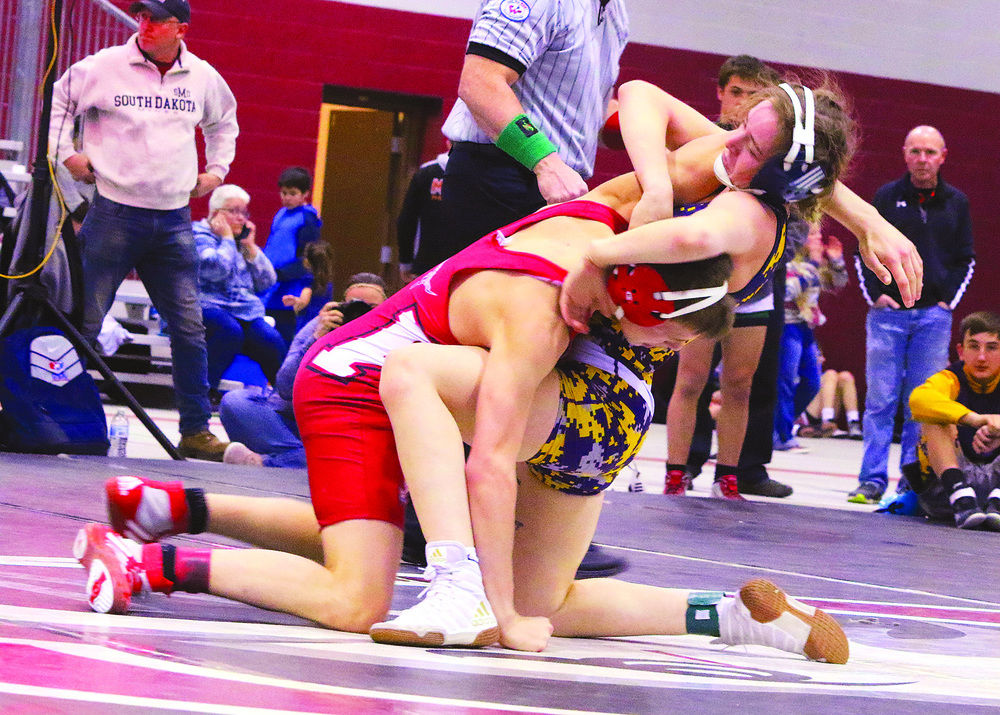 Jerzie Menke, of Bridgeport, wrestles Kimball's Connor Cluff during a match at the Chadron Wrestling Invite earlier in the season. 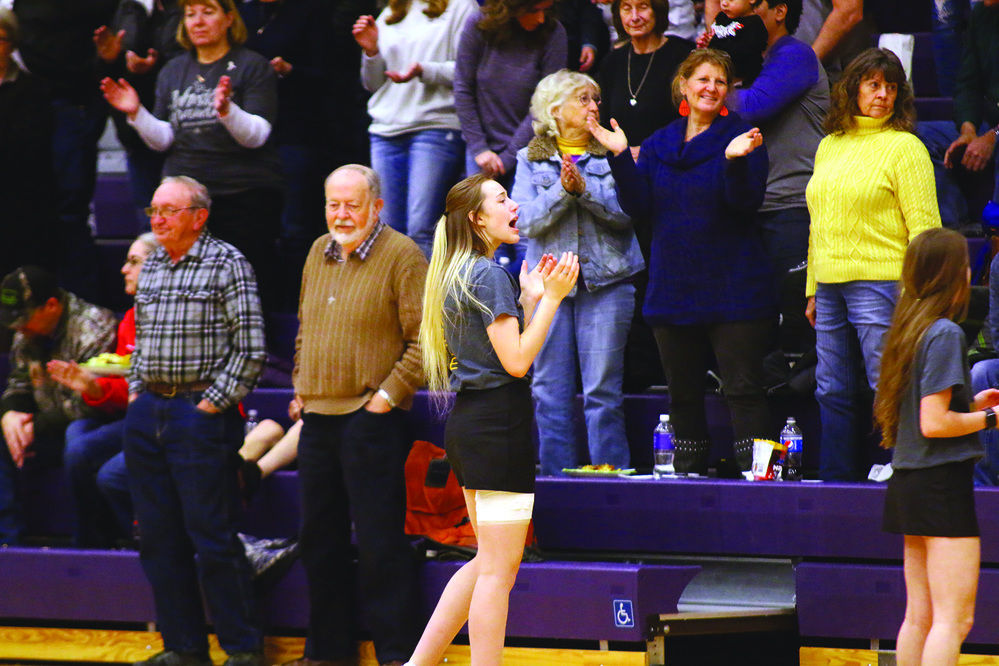 Jerzie Menke, of Bridgeport, wrestles Kimball's Connor Cluff during a match at the Chadron Wrestling Invite earlier in the season.

Jerzie Menke, of Bridgeport, pinned all four of her opponents to claim the first-ever 126-pound championship at the NSWCA Girls High School State Tournament on Feb. 1.

Menke said it took a little bit for her accomplishment to sink in.

“It really didn’t hit me until after my finals match. I was like, ‘Oh my gosh, I just won,’” she said.

The senior described going to the first-ever girls state tournament as a great experience.

“The atmosphere was so amazing. There were no negative attitudes. Whether you are from their town or not, everybody was just cheering each other on,” she said.

Menke pinned her way through the tournament. After having a first-round bye, she pinned Nebraska City’s Lexi Southard in 16 seconds. She pinned Brooklin Kuester, of West Point Beemer, in 30 seconds.

Menke said her hardest match was her semifinal match against Pacie Lee, of Nebraska City. She won by pin in 1:49.

“It felt good to close out my senior year with the girls state tournament. That was pretty cool,” she said.

Bridgeport wrestling coach Zach Malcolm made the trip with Menke.

“It was something neat to see,” he said.

Menke wasn’t the only Panhandle wrestler to go to the girls state tournament. Chadron’s Paige Denke and Hemingford’s Emma Gomez also took part in the tournament. Both Denke and Gomez placed second in their weight classes.

Menke, who considers herself an ambassador for girls wrestling, said the girls state tournament will only help her later in the traditional season. Menke and her Bridgeport teammates have their sights on getting a district win and going on to the state tournament.

“If I can do it at girls state, lets make it to boys state and prove we belong here,” she said.

Menke is hoping to see more girls get into wrestling and the first step is to get the sport sanctioned by the state.

There were 111 girls who competed at the girls state tournament.

Malcolm said Menke and the other girls who competed at the girls state tournament are helping get it sanctioned.

“I think it’s a step in the right direction,” he said. “I think number-wise, for the state, it will have to get bigger. You can see it’s on the rise. I coach little kids wrestling and every tournament, there’s tons and tons of girls who want to do it. If they keep getting more and more females involved, it will just keep growing. It’s good for the sport of wrestling.”

Menke started wrestling at a young age, so she said wrestling boys isn’t something that intimidates her.

“As a female wrestler competing against boys, you have to work harder,” she said. “For boys, strength comes naturally, plus they workout. You have to be really technical. You have to stay in position. If you get out of position and get caught, it’s pretty much over. Mostly, you don’t outmuscle boys because they’re just so strong. You just have to be faster and have good technique. Girls are a little more flexible, it’s hard to pin us.”

Malcolm said Menke is one of his hardest workers. She is helping to get girls wrestling in the public eye.

“She’s just a kid that never quits working and she loves the sport of wrestling,” he said. “She’s a great ambassador for getting female wrestling on the map in the state of Nebraska.”

She represented her school well at the girls state tournament, he said.

“I’m proud of her,” Malcolm said. “She represents Bridgeport at a high level. It’s awesome to see her finally get to go to a state tournament to wrestle other females and come home with a gold medal. That was pretty awesome. I’m really proud of her. It’s a great opportunity for her going forward to maybe go down and go on to college and wrestle. It was an awesome experience to go to for the first time.”

Menke said she does have several offers from colleges to wrestle. She said she is leaning toward Iowa Western and anticipates signing a letter of intent in late February.

She did weigh other athletic options as a young athlete and she is member of the cheerleading team at her school.

“When I was younger, they sent home fliers. Federation wrestling was on one side and cheerleading was on the other. I was like, ‘No, I’m not going to cheer.’ Well, now, I cheer,” she said.

As for wrestling, her interest had been spurred by following her brother in the sport.

“I showed up to practice with my brother. I would go to practices and I would play games with him. Eventually, I started wrestling and went to tournaments.”

Menke said she loves everything about wrestling, including the hard work she has to put in to improve, and, of course, getting wins.

She says she is well on her way to accomplishing her goals with the work she puts in to improve her wrestling skills.

“You set a goal at the beginning of the year. Coach has us write it all down. We look at it every day before practice, and we work for our goals. At the end of the year, we answer yes or no if we worked hard enough to make it. If you circled no, you know how much harder you need to work for next year,” she said. “My goal for the year is to have a winning record. To place at state, which I won. I need to be better on my feet and on bottom.”

Menke and her teammates will take the first step toward state when they compete in the Class C-4 District Tournament on Feb. 14-15 in Hershey.

Medvedev and Shapovalov through to Open 13 quarterfinals