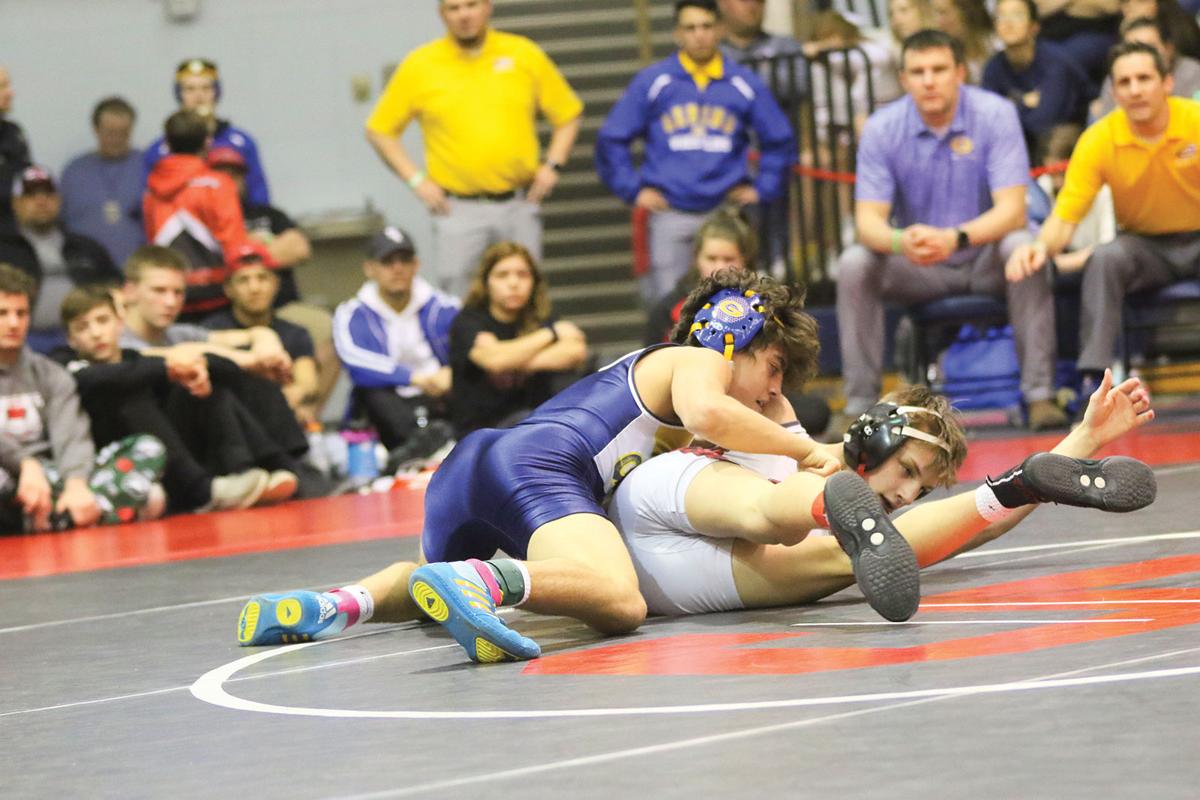 Gering coaches and fans watch as Quinton Chavez wrestles Sidney’s Austin Munier for the 113-pound title in the Class B-4 Sub-district Tournament at WNCC’s Cougar Palace on Saturday, Feb. 15. 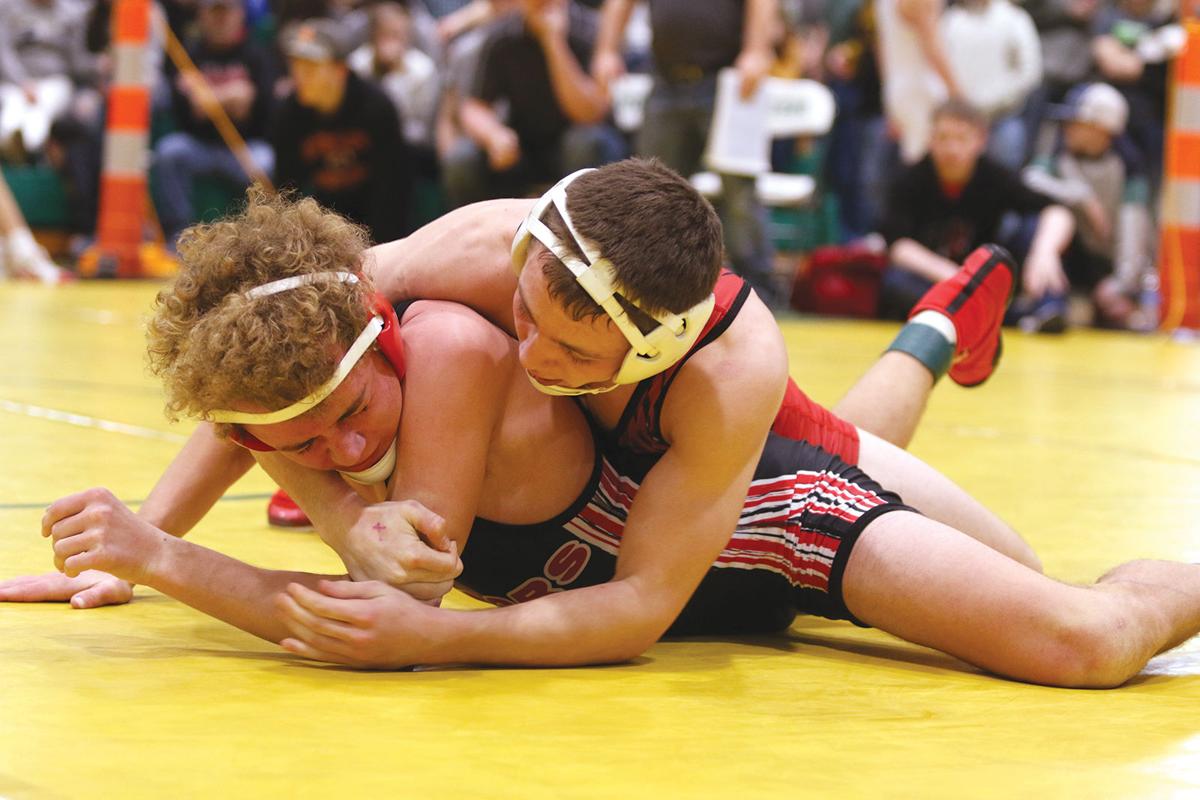 Gering coaches and fans watch as Quinton Chavez wrestles Sidney’s Austin Munier for the 113-pound title in the Class B-4 Sub-district Tournament at WNCC’s Cougar Palace on Saturday, Feb. 15.

The Gering wrestling team is sending seven wrestlers to state after the Bulldogs claimed the Class B-4 district wrestling title Saturday at Western Nebraska Community College.

Gering won the team title with 166 points to Lexington’s 146. Sidney finished third with 135.

Gering coach Jarred Berger, who was named the Nebraska Wrestling Officials Association Coach of the Year, said his team wrestled well to claim their first district title in 11 years.

“We wrestled well. We put some peak performances together and kids went out and got bonus points,” Berger said. “We took care of business. We got the match wins that we needed to get. Our 106-pounder came through and qualified. We knew he had a shot and he just went out and wrestled.”

Sidney is also sending seven to state, while Scottsbluff and Chadron are sending three.

Berger said that is nice for his team since last year they only sent three to state.

“Last year we had three and this year we had seven,” he said. “It is progress and I am excited about that.”

Gering and Sidney both have opportunities to do well at state next week. Berger said his team needs to stay focus.

“That is just it, we have to be focused and ready to go,” he said. “Our kids’ weights are good and we are hitting on all cylinders. They just have to go out and be mentally prepared, which is the big thing. We have to get rested, have a good week of practice, and then go down there and take care of business.

Gering’s state qualifiers include five district champions. Earning district titles for the Bulldogs were Quinton Chavez at 113; Tyler Nagel at 126; Nathan Murillo at 132; Nate Rocheleau; and Jacob Awiszus at 160.

Chavez captured the title to move his record to 39-3 with a 9-1 win over Sidney’s Austin Munier.

Nagel won a high-scoring match against Lexington’s Dylan Hubbard 16-12 for the title.

Rocheleau went to 44-4 on the year with a 6-2 win over Alliance’s Asa Johnson.

Awiszus picked up a pin in the title match in 5:35 over Gothenburg’s Riley Baker.

Finishing runner-up for the Red Raiders were Munier at 113 and Hayden Hofrock at 285.

Robb won the title over Ogallala’s Brock Skinner with a 6-4 decision.

Lecher earned a pin in 2 minutes over Lexington’s Efrin Aguirre.

Chadron, Scottsbluff, and Alliance are all sending three qualifiers.

The Bearcats have two district champions in Paul Garcia at 120 and Trayton Travnicek at 285 as champions.

Also qualifying for the Bearcats was Mychaia Moss at 152.

Garcia earned a tough decision over Gering’s Paul Ruff 4-3 in a back and forth match to earn the district title.

Travnicek earned a pin over Sidney’s Hayden Hofrock in 54 seconds.

Chadron earned qualifiers from Paige Denke at 106, Daniel Wellnitz at 145; and Isaiah Beye at 220.

Denke, a junior, captured second place after she fell 7-2 to Lexington’s Daven Naylor. Denke is 30-12 on the season.

Wellnitz took third with a 3-1 decision over Holdrege’s Treven Melroy.

Beye lost in the championship match by getting pinned by Cozad’s Cade Stott in 3:13.

Alliance’s state qualifiers included Jaxon Minnick at 132, who finished second; Asa Johnson at 138, who took second; and Matthew Escamilla, who took third with a 9-3 decision over Holdrege’s Imanol Munoz.

During the tournament, the officials association named Berger the coach of the year. Berger said he is honored to receive that honor.

“It means a lot and it was a little bit of a surprise,” he said. “It is an honor to get that. This is my third year coaching and I have great kids and great support staff. I have a great coaching staff that supports me and helps me. That award is not just about me, it is about my team, the parents, the community, and especially my assistant coaches that helped me out.”

Berger said the Gering wrestling program has come a long ways in his three years during his tenure as head coach.

“We have grown a lot. When I came in here, we were in a pretty tough spot,” Berger said. “We didn’t have a good culture. We weren’t Gering of old, Gering that I grew up with and wrestled with. So, we have come a longs way and kudos to all the people that helped the kids and families and assistant coaches and everybody. That is a culture change and that is what we did when I became head coach and we are on the right path.”

Bridgeport and Mitchell wrestling teams finished in the top six of the Class C-4 tournament in Hershey on Saturday.

The Bulldogs Trevor Widener also claimed the district title at 145 with a 10-4 decision over Valentine’s Morgan McGinley.

Bridgeport’s Josh Warren also took first at 170 with a 12-8 decision over Ravena’s Jesse Drahota in the title match.

Other members of the Bridgeport team headed to state include Chance Cooper at 126, who placed third with a pin in 57 seconds in the third-place match over Valentine’s Ashton Lurz.

Damien Bell also qualified for state with a fourth-place finish at 138, falling to Mitchell’s Kadin Perez in a 6-1 decision.

Steven Menke qualified for state with a third-place finish at 152 over Gordon-Rushville’s Curtis Rittgarn in a 8-5 decision.

Mitchell will be sending four wrestlers to the Class C state tournament. They included Thomas Hughson at 106 for taking third place; Kadin Perez at 138 for his third-place finish; Nicholas Coley taking fourth at 195; and Nathan Coley finishing fourth at 220.

Hughson won the third-place match over Broken Bow’s Lane Russell in a fall in 2:03.

Hemingford will be taking seven wrestlers to state with one district champion.

Carter Buchheit took the district championship at 132 with a 3-2 decision over Sutherland’s Jon Peterka. Buchheit is 25-4 on the season.

Bayard will be taking three state. The Tigers Christian Leonard won the district title at 152 when he earned a major decision over Hemingford’s Isaiah Bryner 12-7.

Other Tigers headed to state include Hunter Kildow at 132 for a fourth-place finish; and Beau Lake for taking second at 138.

Minatare will be sending three to state. Leading the Indians is Ceasar Garduno at 285 in winning the district title with a win over his teammate Tony Gonzales, Gonzales is also headed to state for the Indians.

Hayden Olds will also be headed to state for Minatare at 160 with a third-place finish.

Garden County is taking three to state as Colton Holtuhus won the 145 class with a pin over Dundy County’s Serbando Diaz in 3:28.

Also headed to state for the Eagles is Riley Holthus at 152 for a third-place finish; and Dallas Miller at 182 for a fourth-place finish.

Crawford will be taking all three of their wrestlers that were entered. Dennis Vogl at 138 earned the district championship with a medical forfeit.

Leyton has one state participant as Brenton Abbott at 126 took fourth.

AP Was There: Snead tops Hogan in playoff to win '54 Masters

AP Was There: Snead tops Hogan in playoff to win '54 Masters