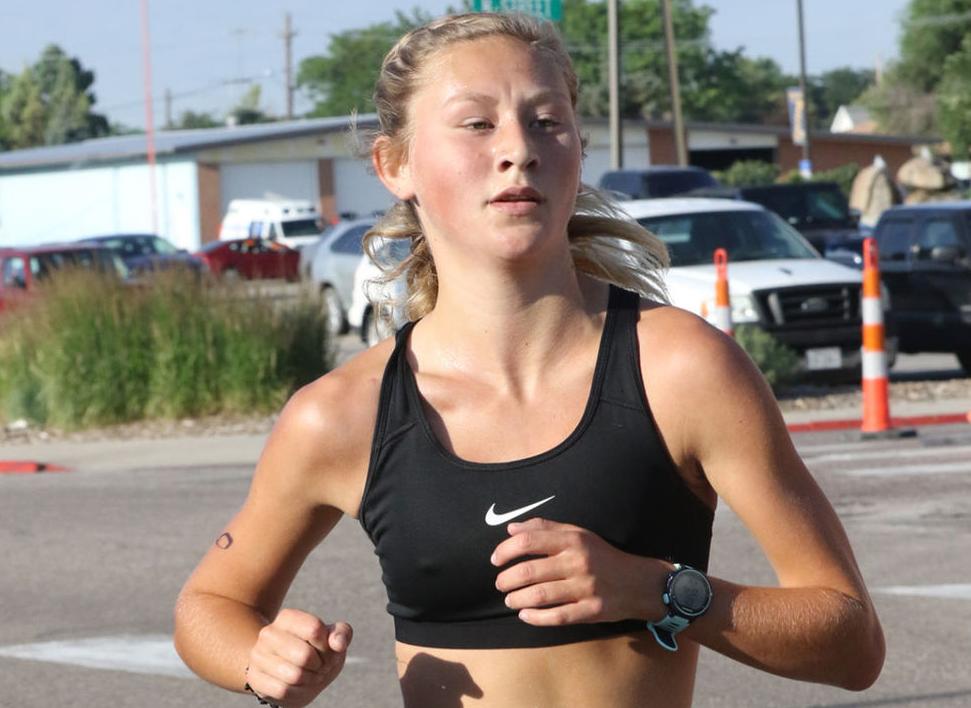 Kaylee Bentley, of Scottsbluff, runs in the Don Childs Memorial Run in Gering on July 12. Bentley won the women's division of the race. 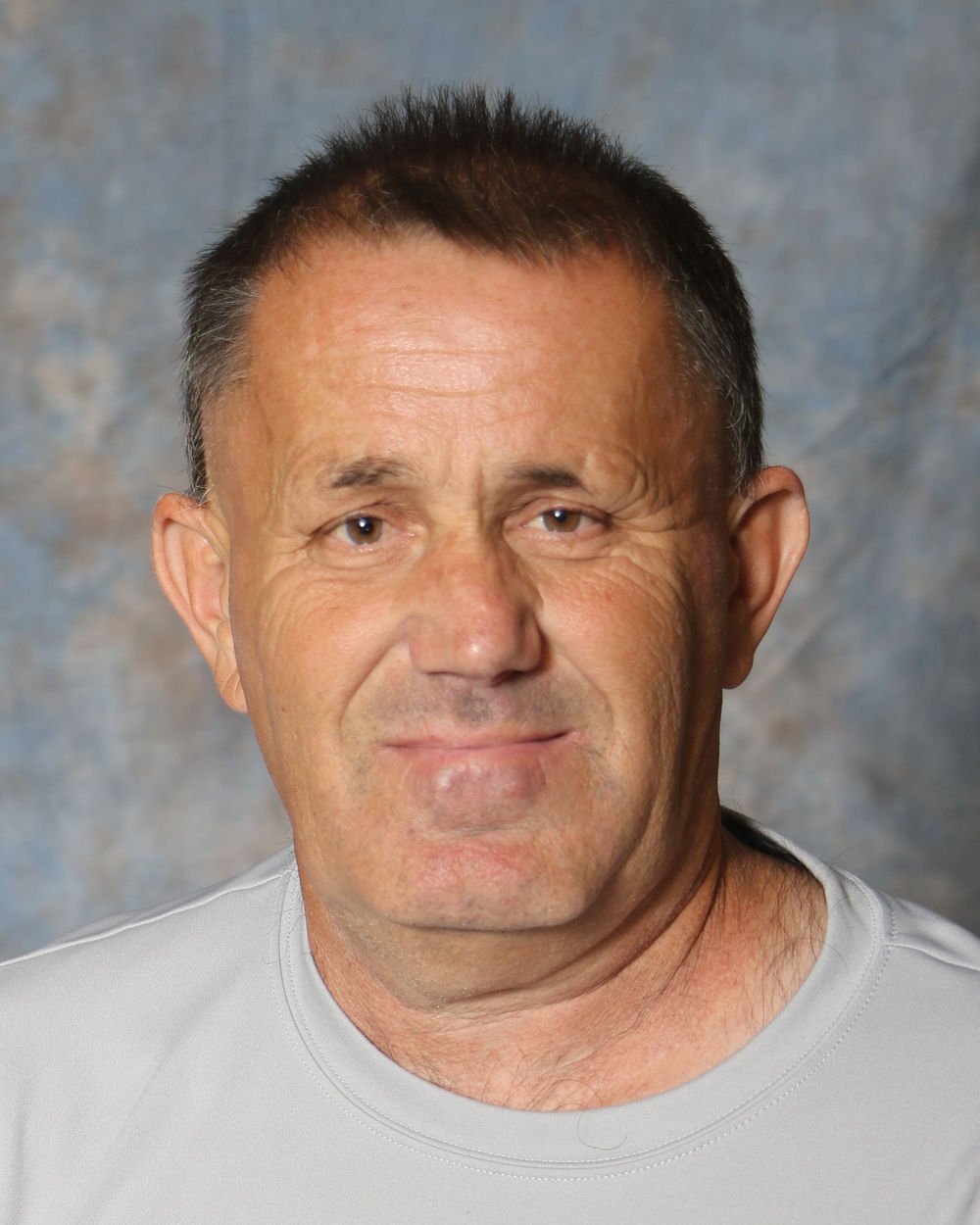 Mark Rein is a correspondent for the Star-Herald.

Kaylee Bentley had an outstanding running and soccer career at Scottsbluff.

Now, Bentley is taking her running success to the next level at the University of Wyoming where her sophomore season is shaping up to be her best yet.

“My sophomore year has been going great so far,” Bentley said. “We only have one cross country meet left before we move on to indoor and outdoor track.”

The Wyoming cross country team competed in the Mountain West Conference championships last weekend and the women’s team did well. Bentley, herself, finished 40th out of 88 runners in a time of 21:35.2.

“Our team did very well at the Mountain West Championships,” she said. “Last year we were 8th and this year we improved to 6th. It’s one of the best distance running conferences in the country, so that was exciting for us.”

With conference action out of the way, Wyoming will get ready for the NCAA regional meet in Salt Lake City, Utah, on Nov. 15.

“The focus for regionals is just to do as well as we can and hopefully improve from last year,” she said. “It’s also one of the hardest regions in the country so we are hoping to crack the top 12.”

Bentley’s running has gotten better and a big reason is the training they do at the higher elevation.

“Practice is pretty tough. I run 70-75 miles a week during a normal volume week which means I have to run twice a day about four days out of the week,” she said. “We usually do two speed workouts, a midweek long run, and a long run every week. It’s also difficult, but very rewarding training here at 7,200 feet. Sometimes for our long runs, we even go up and run between 8,000 and 9,000 feet.”

That training has generated faster times this year with personal records in the 5K of 17:44 and a PR in the 6K of 21:09.

“I have improved significantly in my two years here at Wyoming,” she said. “Not only have I improved physically as an athlete, but mentally and academically as well. I have been challenged in all different aspects here and it has allowed me to grow so much as a student and an athlete.”

Being only 2 1/2 hours from home is not bad either. Bentley said she loves being at Wyoming.

“I love the coaches and the team atmosphere that we have here at Wyoming,” she said. “Our team atmosphere this year has been incredible, and the coaches are amazing. I feel like I’m in a great place to reach both my academic and athletic goals. We also have so many trails and beautiful places to run, I couldn’t ask for a better place to go to school.”

Bentley has some advice for high school students to make their sport fun.

“My advice to high school kids would be to have fun with whatever you’re doing,” she said. “Be consistent, work hard, and enjoy the process. Everything else will fall into place. Make the most out of every opportunity that you get and always find the positives in whatever situation you may be in. You never know what lessons you may learn along the way.”

 Emerson Cyza, Alliance graduate, has been a contributor for the University of Wyoming volleyball team this year. Cyza has appeared in 12 matches for the 15-8 Cowpokes. She has 62 kills with a hitting percentage of .168. She also has two aces and 16 total blocks. Cyza had a season high 13 kills in a win at Colorado State on Oct. 29. Wyoming will next be in action Saturday when they travel to Fresno State. Their next home matches will be Nov. 14 and 15 when Boise State and Utah State come to Laramie.

 Jadyn McCartney, a Chadron High graduate, is having an outstanding junior campaign for 17-7 Division I University of Northern Colorado. McCartney, a 6-foot-1 outside hitter, has pounded down 145 kills this season with 182 digs. McCartney had a season high 15 kills on Sept. 7 against Wyoming and had 24 digs on Sept. 6 against the College of Charleston. UNC is on a 3-game win streak as they host Weber State on Thursday.

 Jessi Smith, University of Nebraska senior, had a personal best performance for the Husker cross country team on Sept. 21 when she ran a 19 minute, 34.2 in a 5k race to finish 58th out of 184 runners during the Woody Greeno/Jay Dirkson Invitational at Mahoney Golf Course.

 Alan Pinho, former Western Nebraska Community College men’s soccer player, was part of a solid season for Point Park University men’s soccer team, helping the Pioneers to a 15-3 regular season mark. Pinho finished the regular season with three goals and two assists. Point Park now needs to wait to see if they will get an automatic berth into the NAIA national championships.

 Enna Masaki, former WNCC volleyball player, is having a solid junior season for UTEP this season. Masaki has played in 22 matches this season. She has 404 set assists, 132 digs, 14 kills, and 20 aces this season so far.

 Mitch McKibbon, a Bayard graduate, had a big part in Black Hills State’s game with South Dakota Mines on Oct. 12 when the defensive back registered two solo tackles in a 48-28 win. Black Hills State is 2-7 on the season.

 Logan Moravec, a Gering High School graduate, ran his fastest 8K at the RMAC championships in October. Moravec, freshman on the Chadron State College cross country team, was the fastest Eagle male runner in the meet with a 27:06.8 time to finish 96th in the RMAC championships in Grand Junction, Colorado. The Eagle cross country team will be back in action on Saturday when they compete in the NCAA South Central Regional in Canyon, Texas.

Farrells face off in father-vs.-son clash in Six Nations

Hunter Pence thrilled to be back with Giants after year away