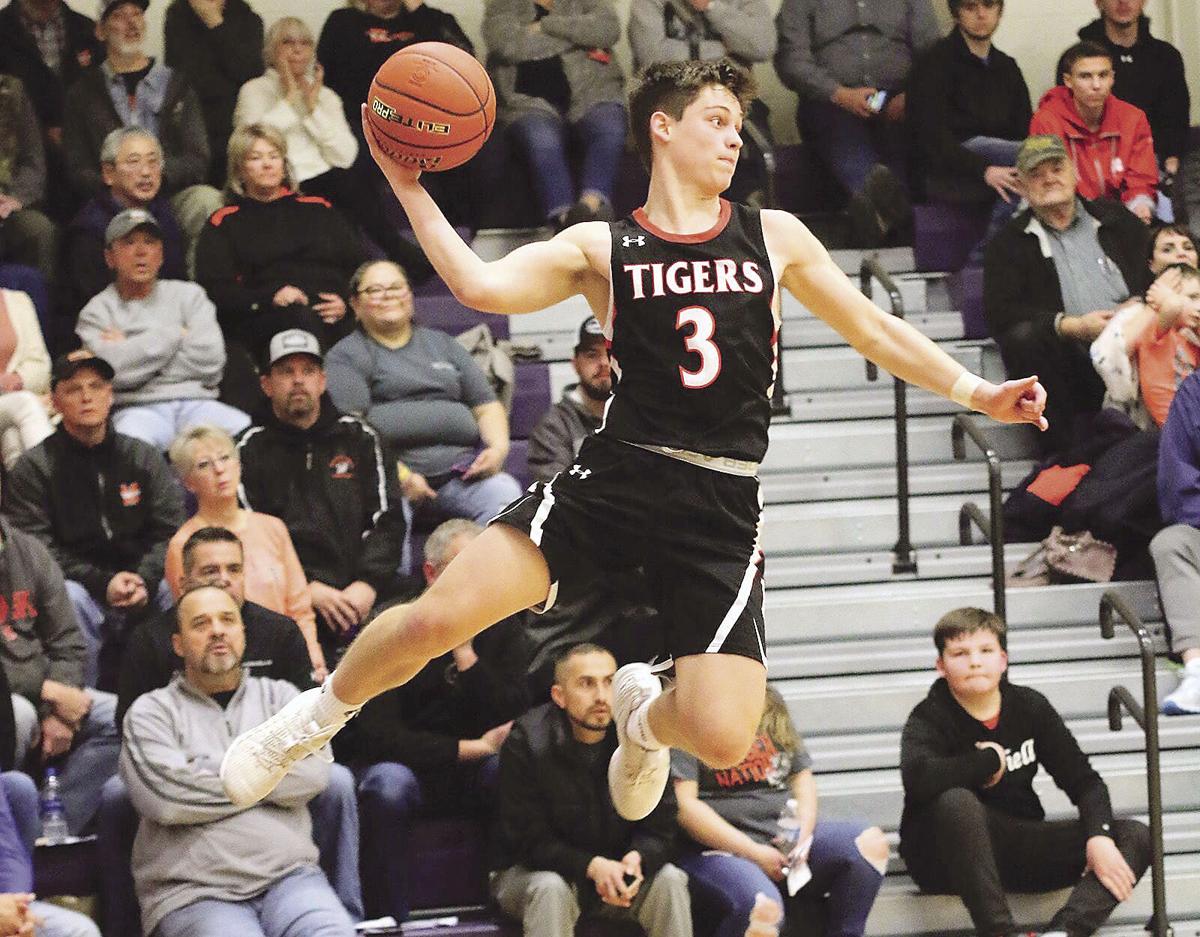 Mitchell sophomore Austin Thyne saves the ball from going out of bounds during a game against Ogallala on Feb. 13 in Mitchell. Thyne scored 39 points to thwart a comeback attempt by Ogallala. 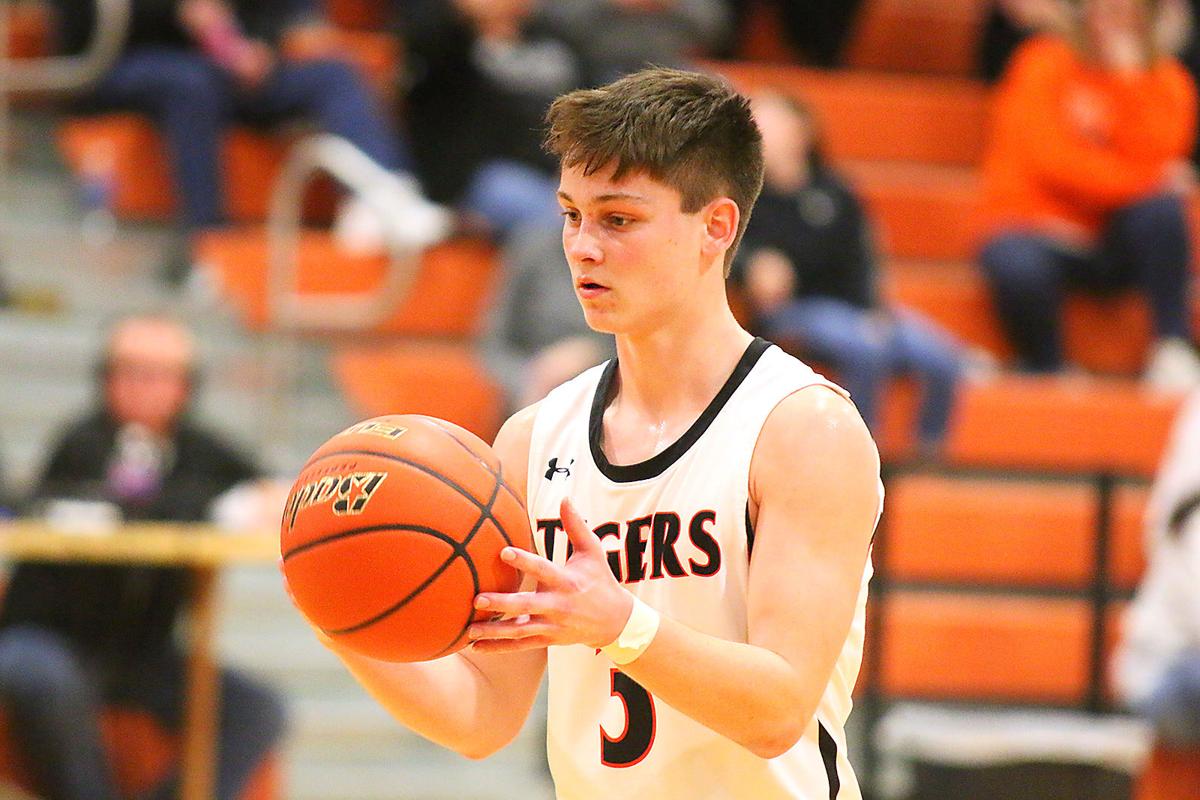 Mitchell sophomore Austin Thyne gets ready to shoot a free throw during a game against Ogallala on Feb. 13 in Mitchell. Thyne scored 39 points to thwart a comeback attempt by Ogallala. 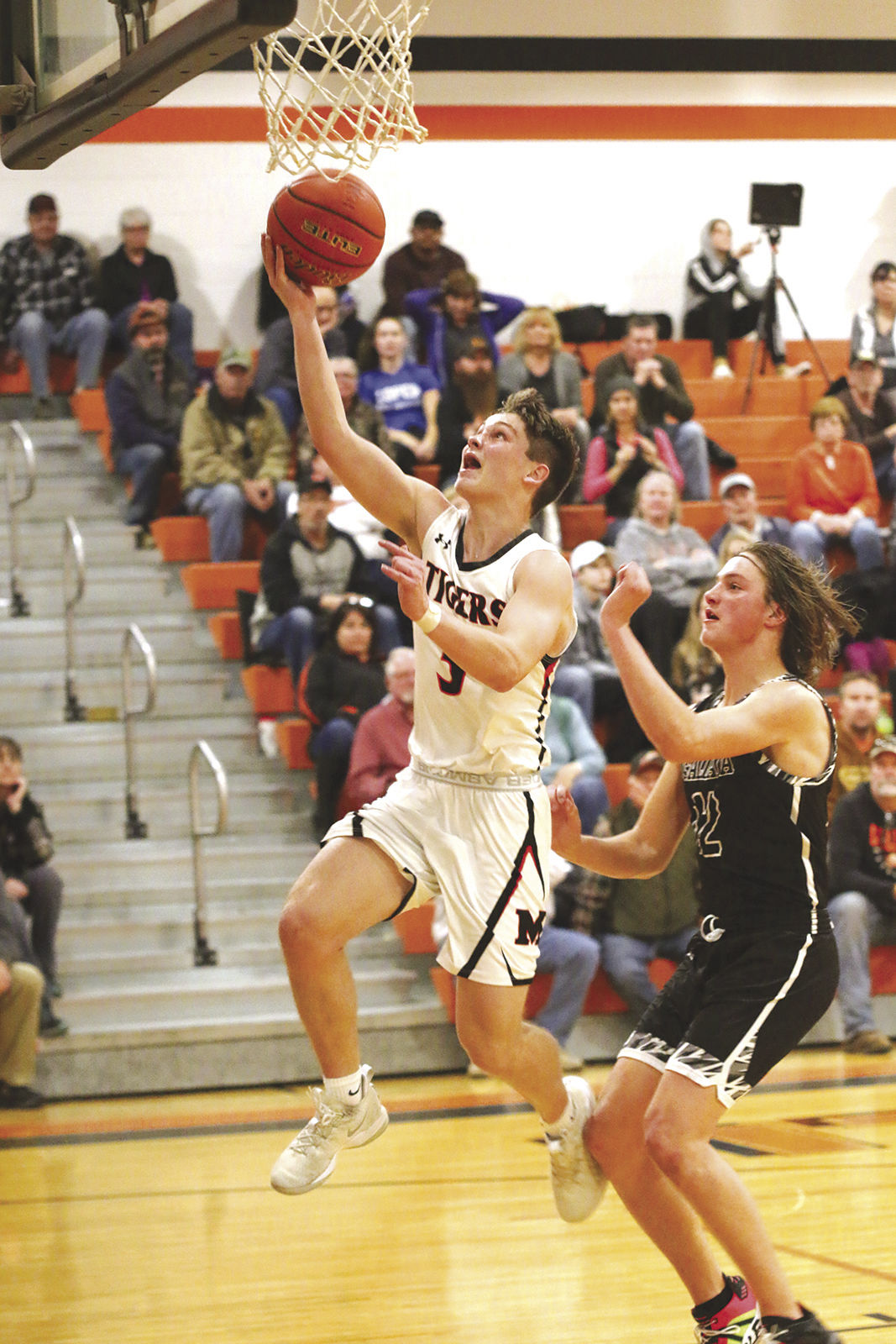 Mitchell sophomore Austin Thyne drives past an Ogallala defender during a game against Ogallala on Feb. 13 in Mitchell. Thyne scored 39 points to thwart a comeback attempt by Ogallala.

Mitchell sophomore Austin Thyne saves the ball from going out of bounds during a game against Ogallala on Feb. 13 in Mitchell. Thyne scored 39 points to thwart a comeback attempt by Ogallala.

Mitchell sophomore Austin Thyne gets ready to shoot a free throw during a game against Ogallala on Feb. 13 in Mitchell. Thyne scored 39 points to thwart a comeback attempt by Ogallala.

Mitchell sophomore Austin Thyne drives past an Ogallala defender during a game against Ogallala on Feb. 13 in Mitchell. Thyne scored 39 points to thwart a comeback attempt by Ogallala.

With an impressive sophomore campaign, Mitchell’s Austin Thyne is quickly cementing himself as one of the best players in the region after recently being selected as the Western Trails Conference MVP.

Thyne ranked third in scoring in Class C1 at 18.7 points per game. Thyne, though, says he didn’t necessarily go out looking to score as prolifically as he did. Thyne scored a season high 39 points against Ogallala helping seal the game with some late free throws and thwarting a big comeback.

“It was kind of the flow of the game. I just let the game come to me and tried not to force anything. I let it take care of itself,” he said.

Even with the great season he turned in, Thyne was surprised to learn he was the WTC MVP. With the MVP honor, Thyne said he has to work harder to maintain that status.

“I think the recognition will give me some motivation,” Thyne said. “I just want to work as hard as I can in the offseason to get better for next year. It is a good thing to fall back on.”

There are some facets of the game Thyne would like to work on to make himself even more of a complete player.

Thyne ranked fourth with 60 3-pointers on the season, which he said he hopes to improve on next season, as well.

“I think I’m a pretty good 3-point shooter. I focus on that a lot in my game. Next year, I’d like to extend that a lot more,” he said. “I do like to drive to the basket. I want to be a dual threat on the offensive end.”

Thyne, though, is not a one-dimensional players. He is a pesky defender ranking sixth in C1 with 62 steals.

“I think I get a lot of fastbreak points, especially off of steals. Those are easy points in transition when you’re already down the court,” he said.

“It is a stop on defense, and then it leads to points too,” he said. “With a three, you get 3 points and have to go back on defense, too. A good steal can get everyone hyped up a little bit. It is just a little more demoralizing.

“I’ve always focused on steals. I’m just in the right position a lot of times where I can bite on the ball and see when people are going to pass it. That’s when I usually when I get a steal.”

Even losing some key seniors, Thyne said the Tigers should field a strong team again next year.

“Everyday in practice, we have good competition from seniors, sophomores and freshman. Everyone just plays together. I think next year we will be just as good. I’m really excited for next season. We have a lot of really good talent coming up in the junior class,” he said. “I need to step up (as a team leader) a lot more, especially with losing three or four seniors. I just need to step up a lot more for the younger players, too.”

Next year will be a little different for Thyne. One of the graduating seniors is his brother Blake.

Social distancing and everything else that has come with the coronavirus outbreak hasn’t kept Thyne away from basketball.

“I’ve been shooting outside two to three hours a day on my own. I have my own hoop outside, so that’s kind of nice to have. I’ve been working on a lot of things out there because there’s not much to do right now,” Thyne said.

The coronavirus outbreak did rob Thyne of the chance to compete in golf during the high school spring season.

“I was pretty excited to play golf this season. It’s a bum deal that I can’t compete, but I still go out and play,” he said. “For two weeks, I didn’t golf. I’ve been golfing quite a bit recently because Scenic Knolls is open and like golfing with my brother. It gives us something to do.”

Berry airs out grievances with USOPC in wake of Floyd death

Berry airs out grievances with USOPC in wake of Floyd death

Brees says he 'completely missed the mark' in flag comments