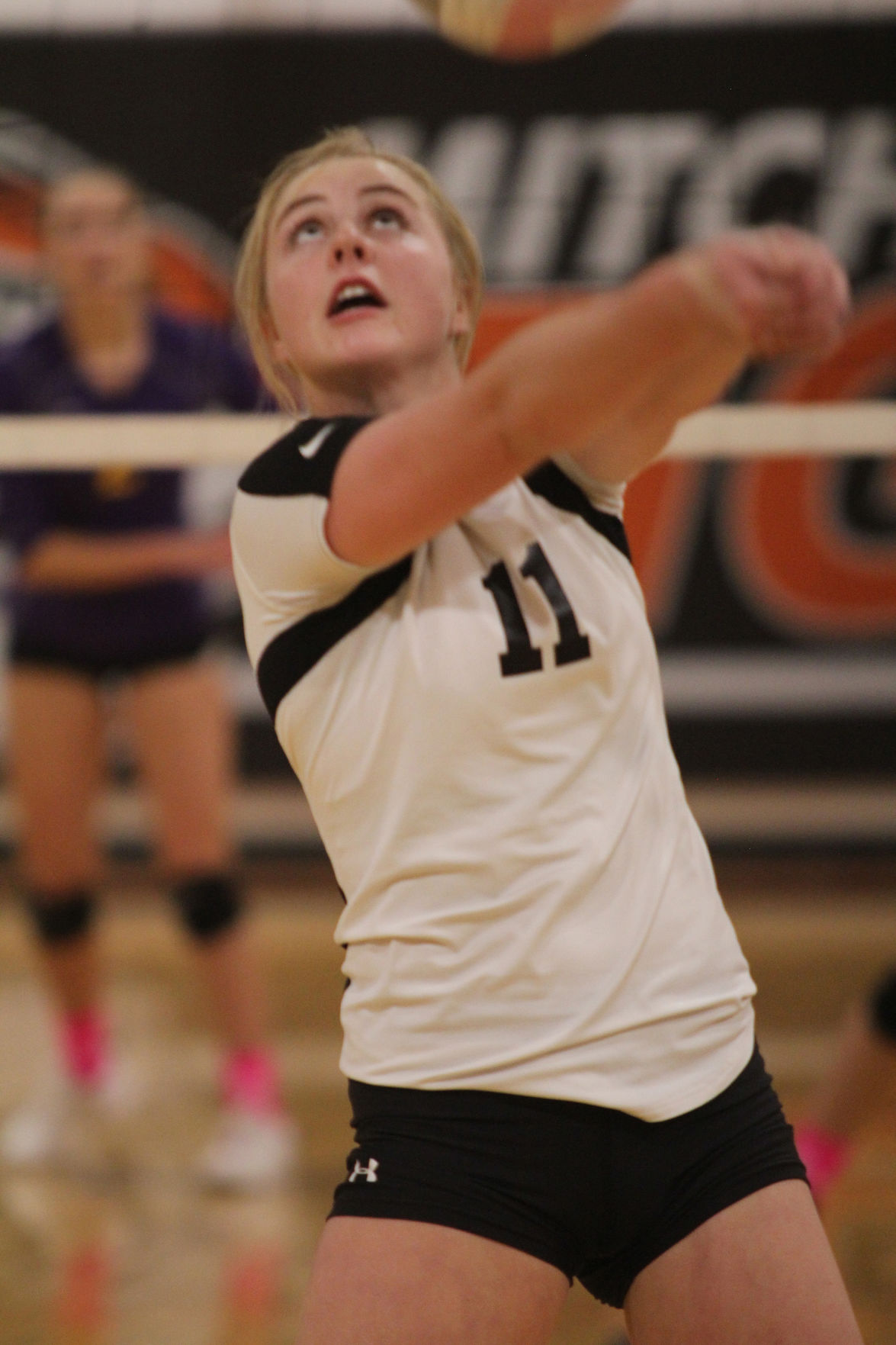 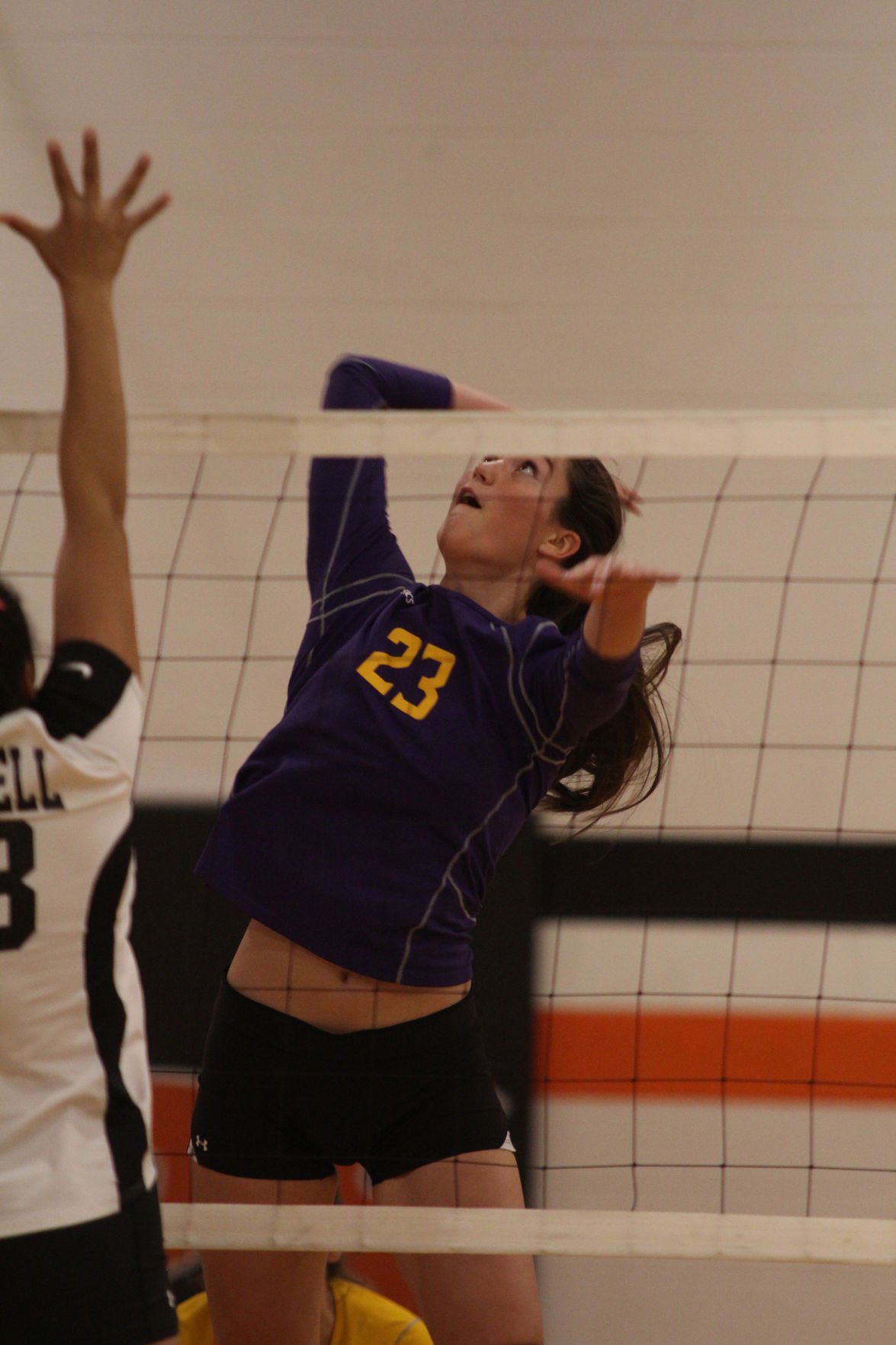 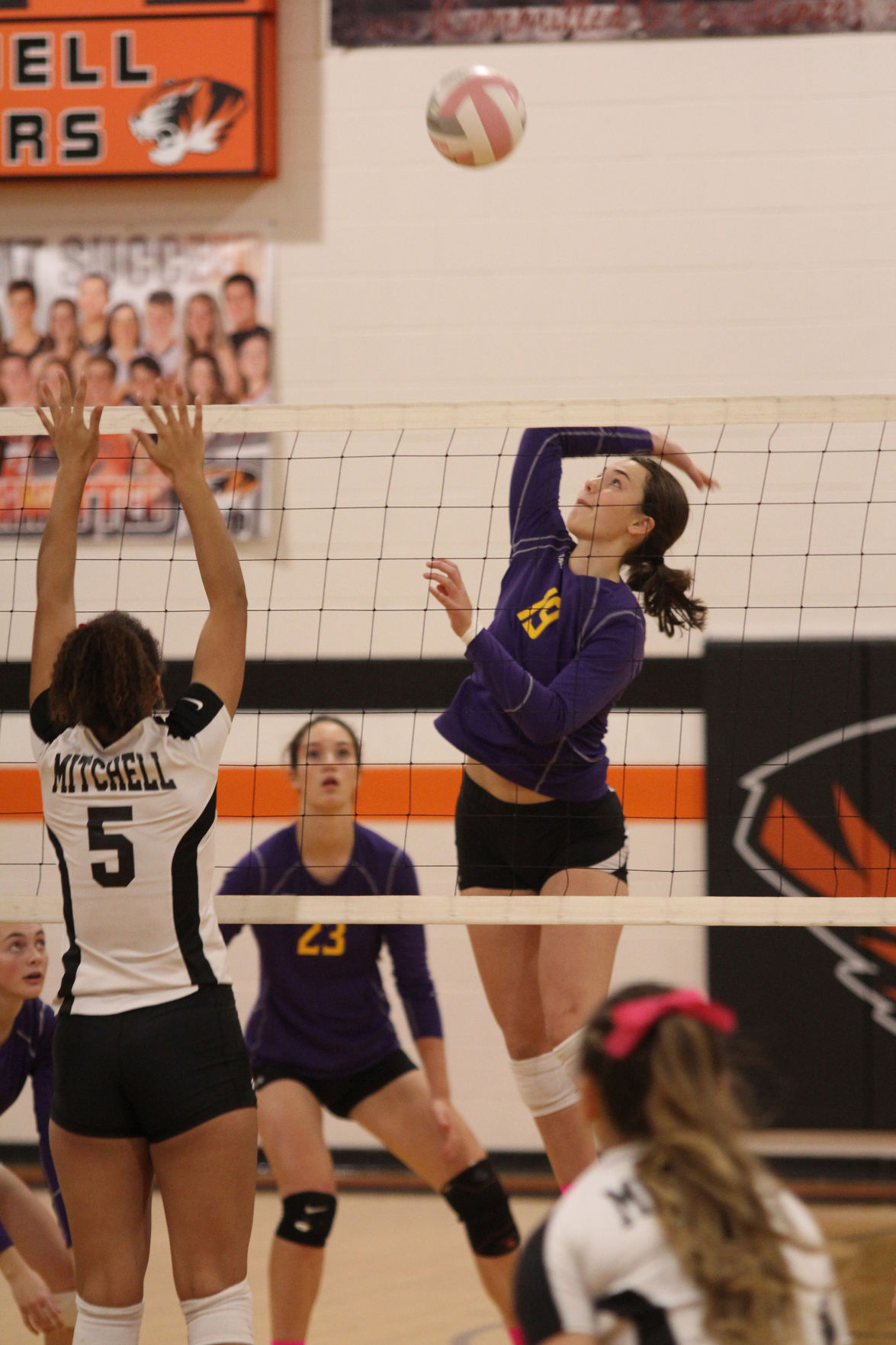 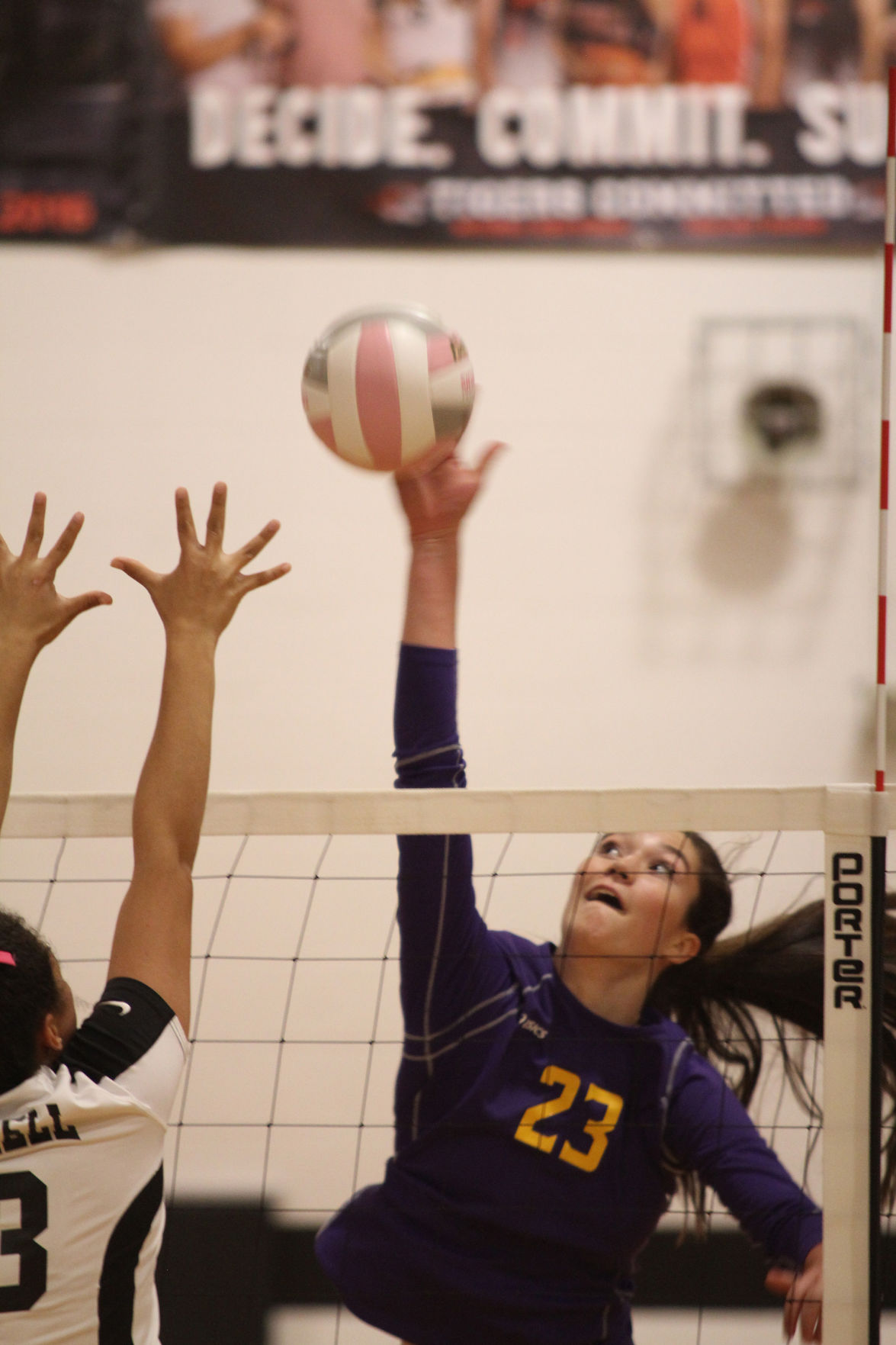 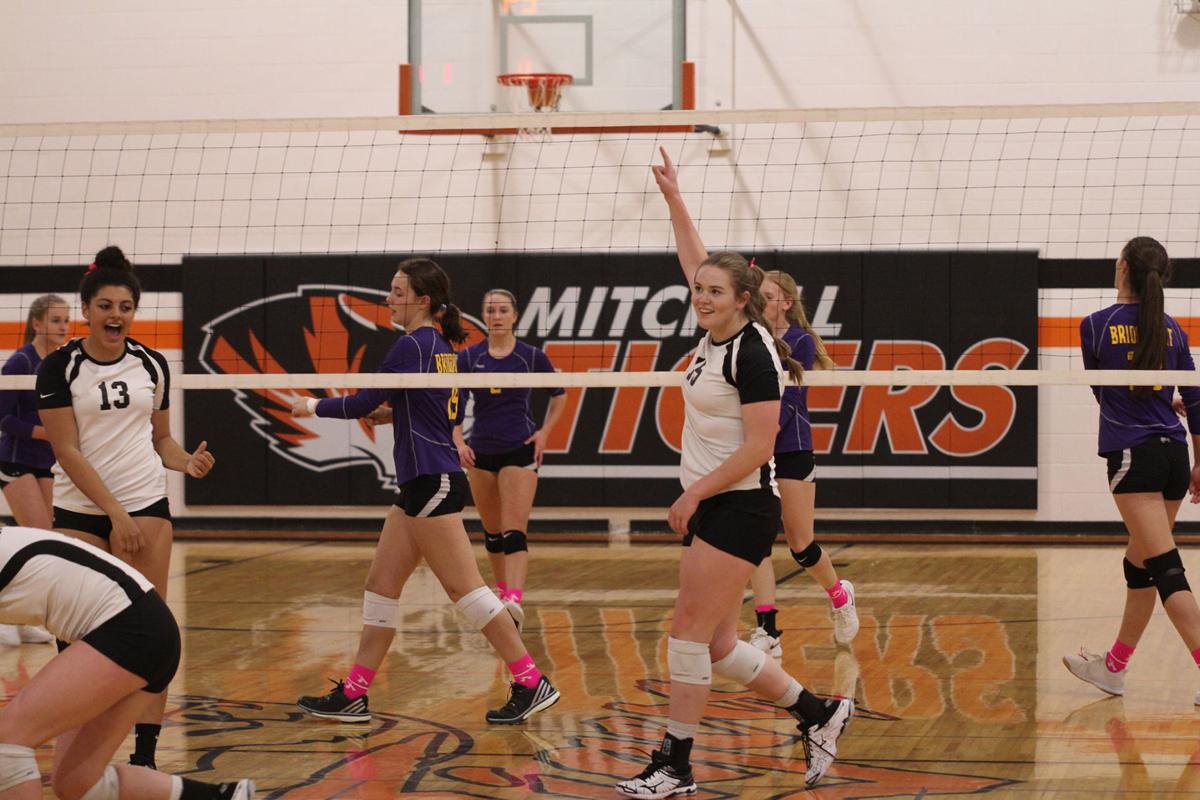 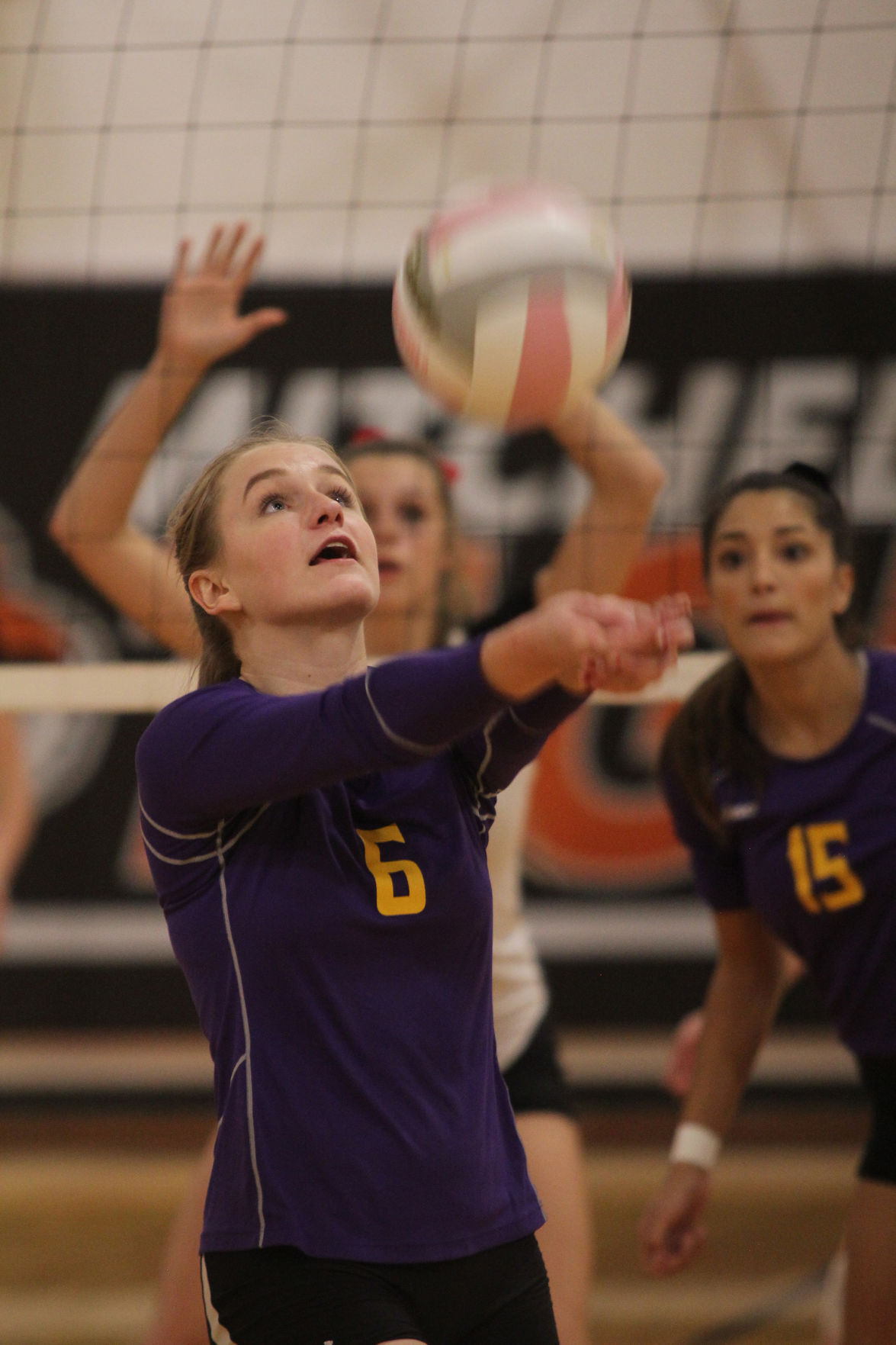 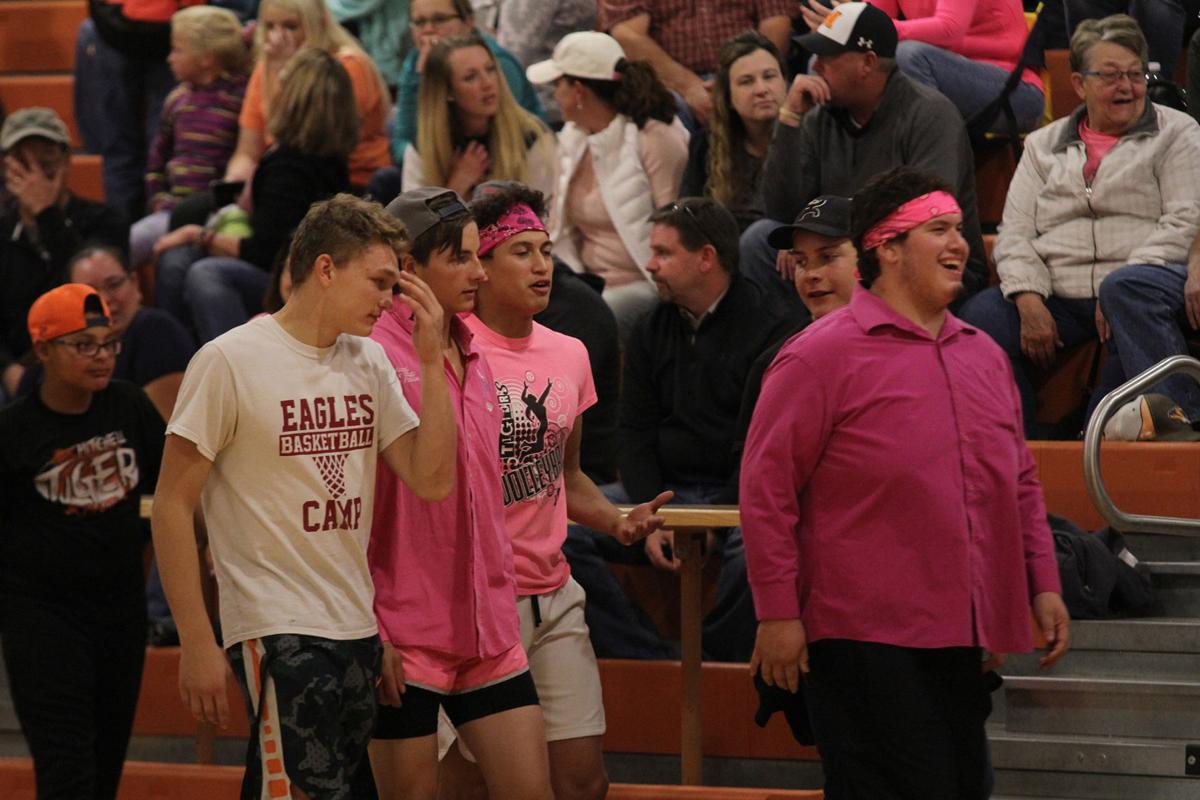 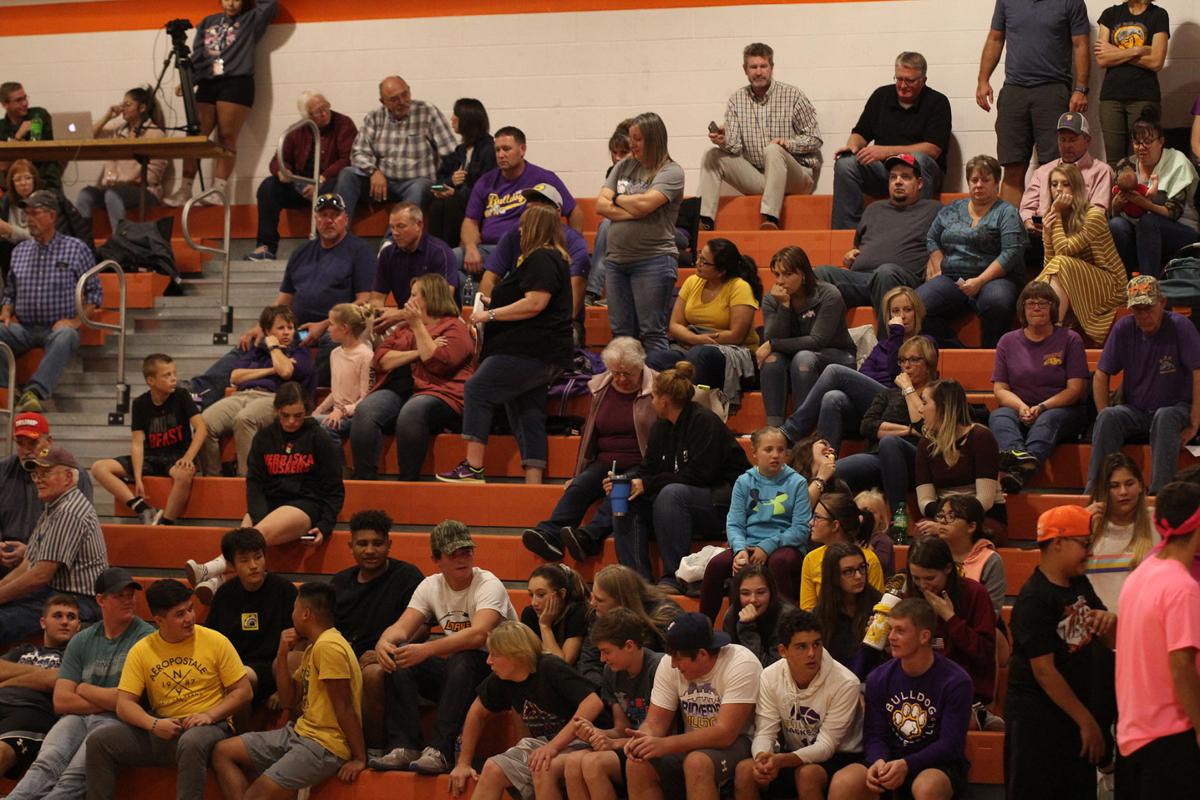 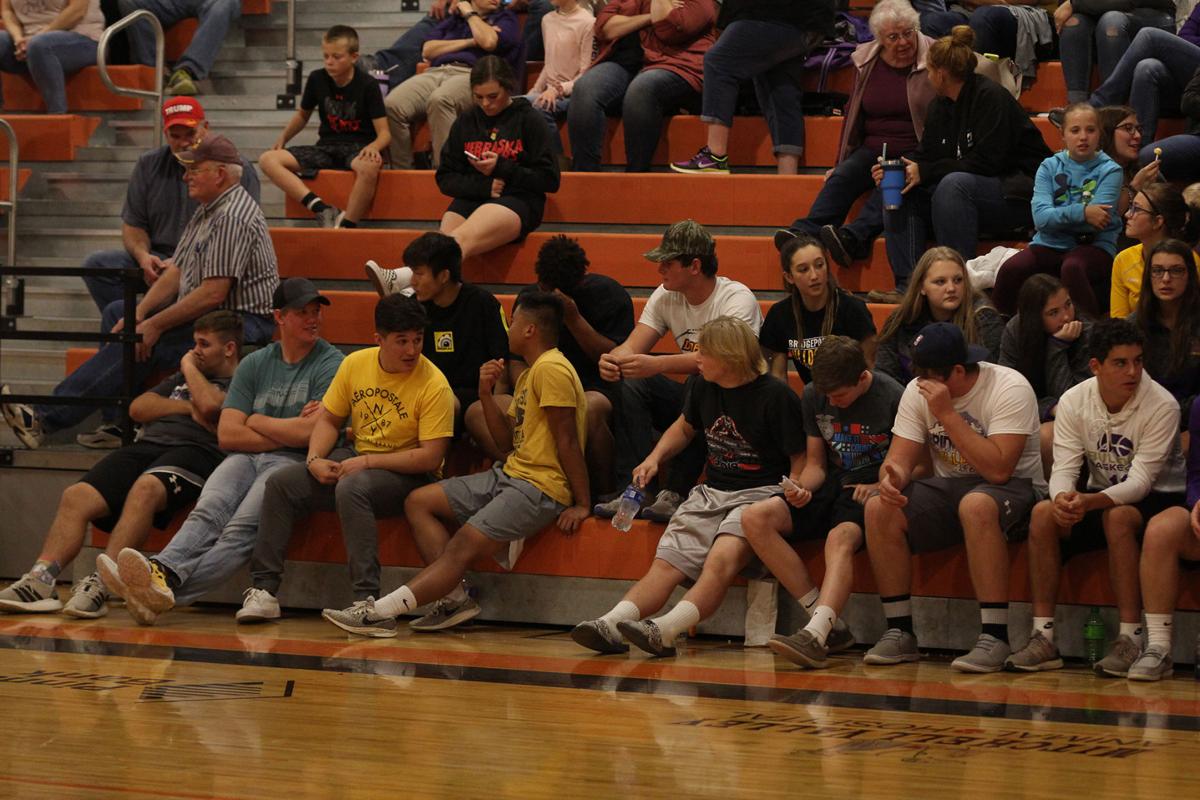 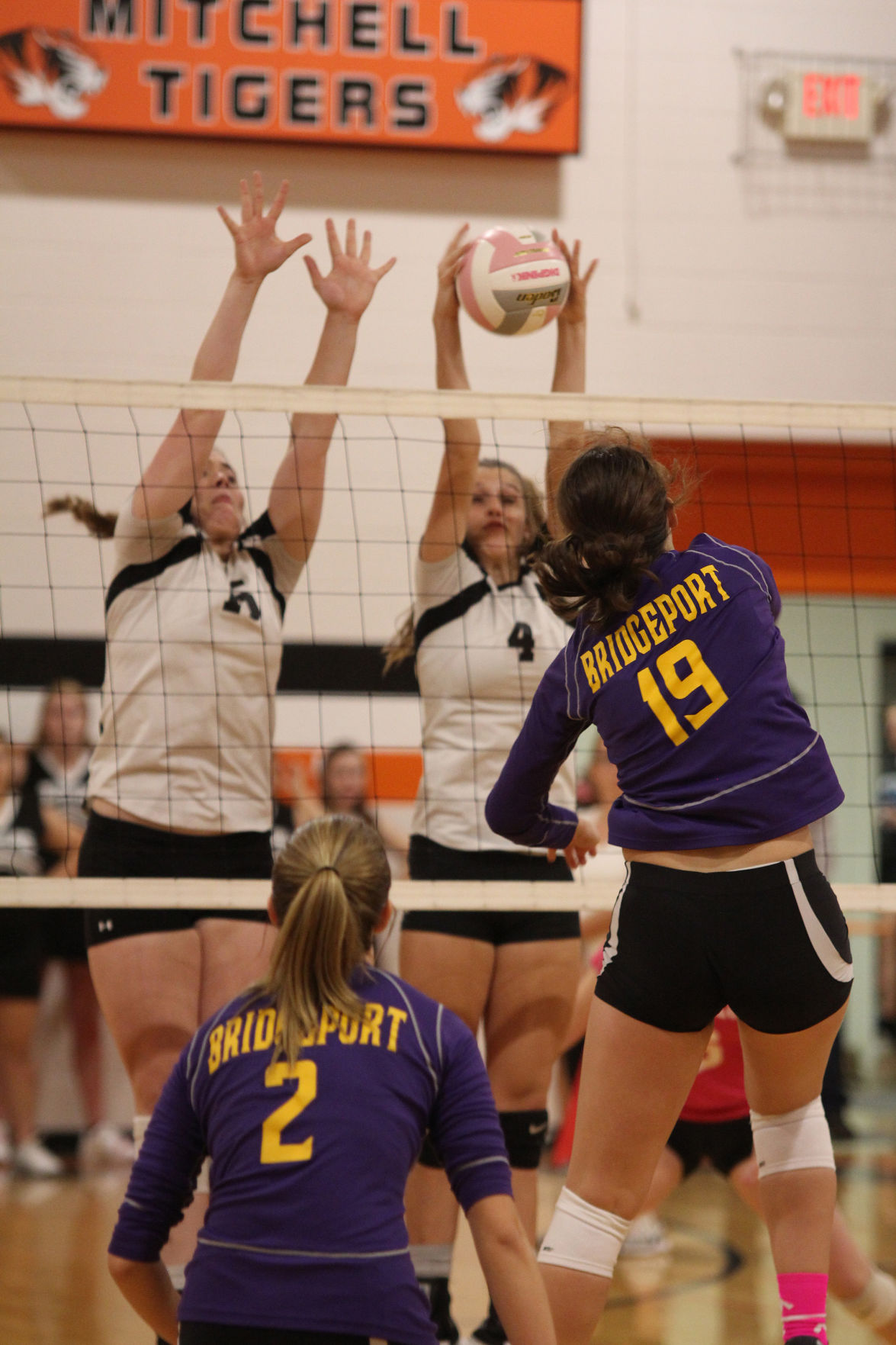 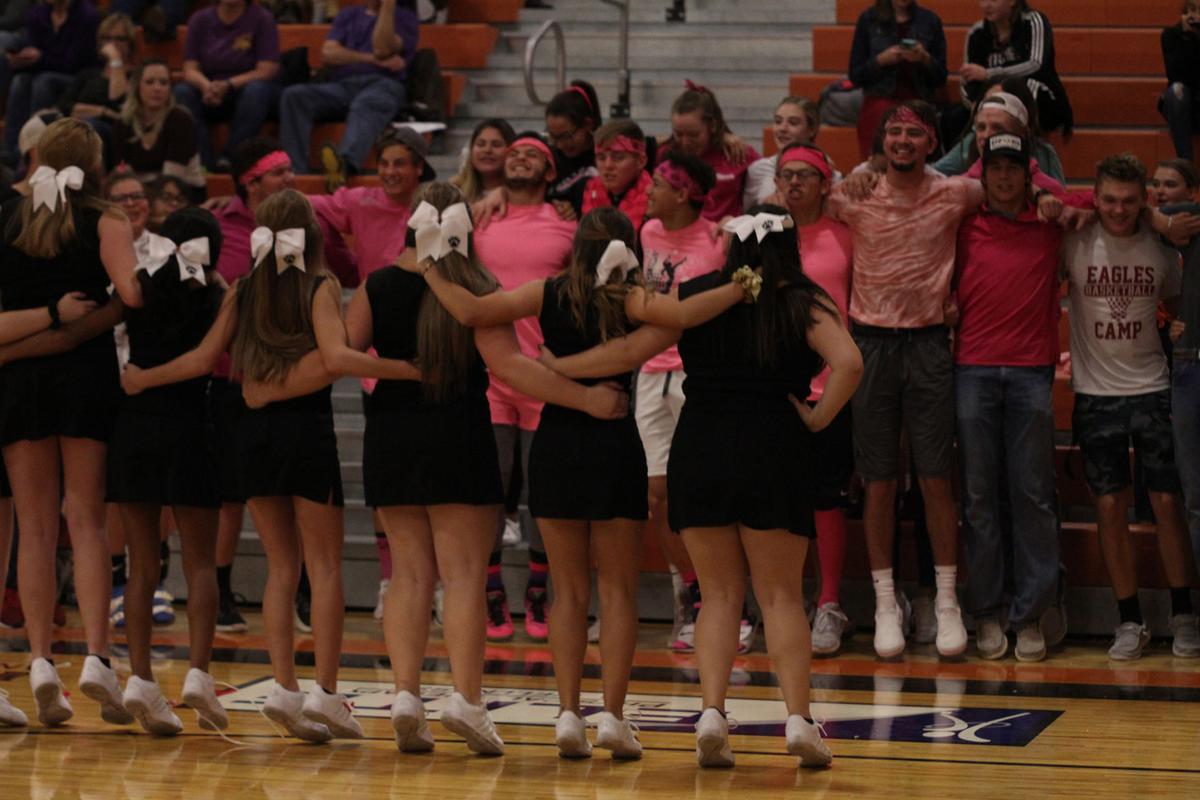 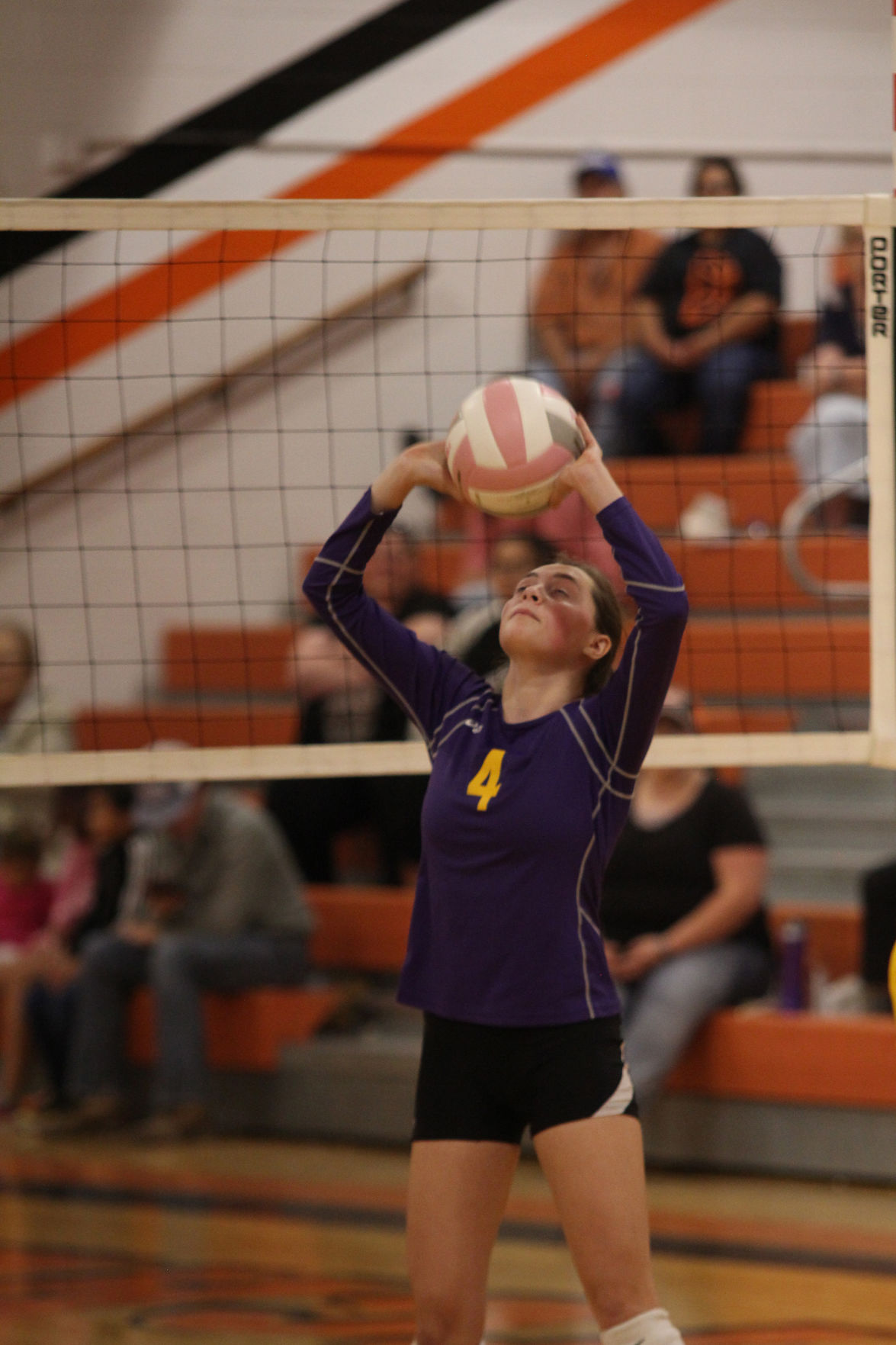 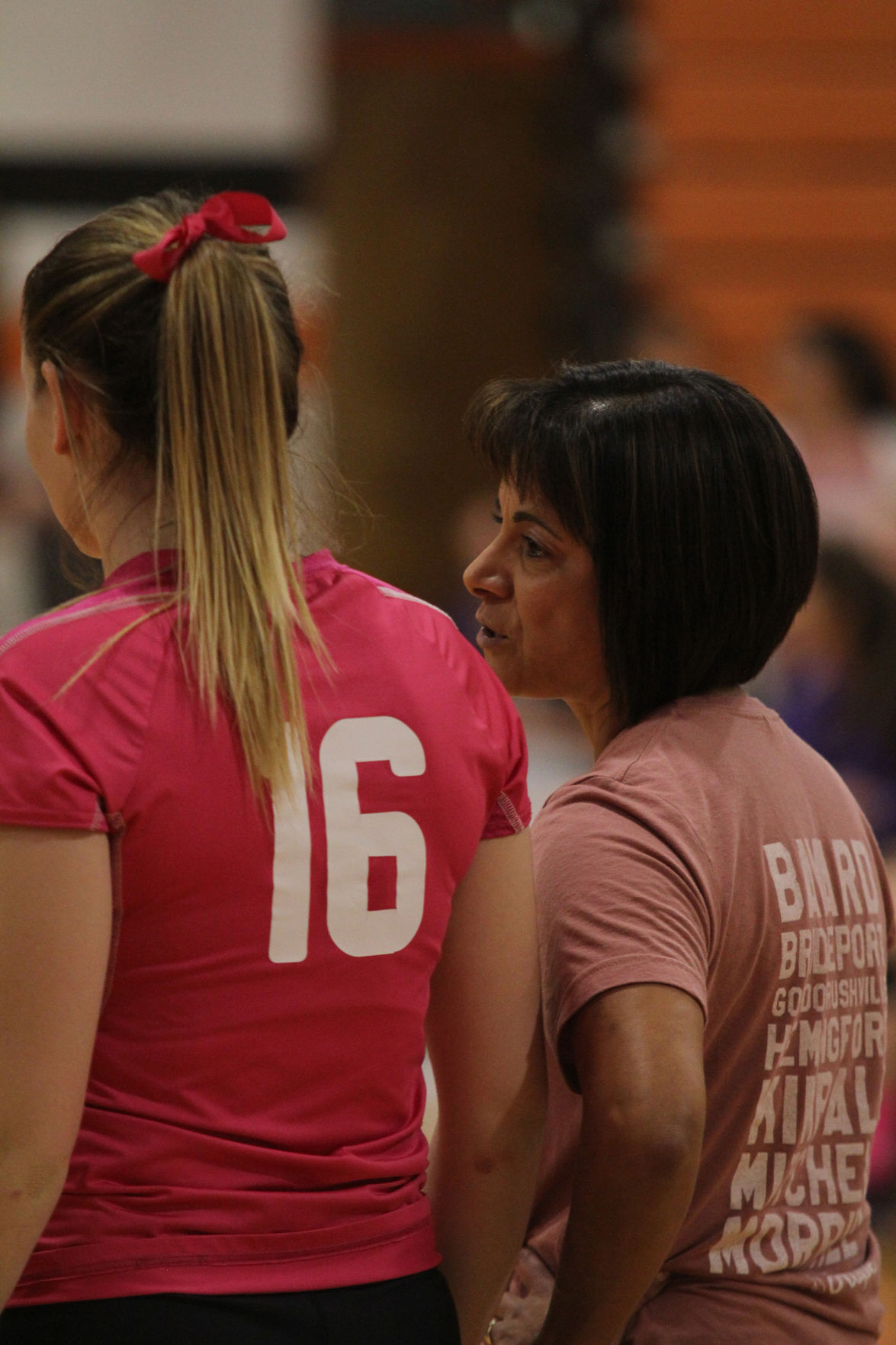 The win snapped a three-game skid for Mitchell and head coach Michelle Peters said it was good getting a few key players back into the lineup.

“I’m pretty proud of these kids,” she said. “We’ve had some ups and downs and tonight these kids decided they were going to play their potential. We got everybody back. We were missing some players on Saturday at Western Conference and we got everybody back, and so it’s just nice to see them all back on the floor and us getting that team chemistry back.”

The Tigers jelled early on in the match, racing out to a 18-8 lead midway through the frame led by strong offense from Quincey Johnson and Josie Jenkins before finishing out the set on a 7-1 run go take a 1-0 lead in the match.

After falling behind 5-0 to start set 2, Bridgeport put together one of its strongest runs of the night going 7-1 from the line and taking a 7-6 lead in the set. Both teams bounced back and forth in the frame until Mitchell pounded out a 5-2 run showcased by a pair of aces from Avery Hobbs to extend its lead to 14-10. Strong net play by freshman Ruthie Loomis-Goltl and Karlie Deaver pulled the Bulldogs back to within two, 17-5 at the midway point of the set. However, the Tigers chipped away with kills from Jenkins and Trinity Penn to take a 24-19 lead. Bridgeport, though, wouldn’t give up the set point after a pair of kills from Ruthie Loomis-Goltl cut the deficit to 24-22, but an unforced error on the next sideout gave Mitchell the set win and put the Tigers in the driver’s seat, 2-0 in the match.

“I was a little disappointed,” she said. “We played too cautious. We played not to lose instead of playing to win. We just have to get past that.”

Mitchell kept its momentum going in set 3, giving up the first point to the Bulldogs before Jenkins rattled off five-straight service points to put the Bulldogs in a hole, 5-1, early on. Mitchell kept pounding away with kills by Jenkins and Johnson, topped off by Jenkins’ third ace of the night to give Mitchell a 23-17 lead. Bridgeport received one more kill from Ruthie Loomis-Goltl, but the Tigers finished off the sideout on a kill from Makena Chambers to finish the sweep over the Bulldogs.

Peters feels good about where her team is at this point of the season and believes the Tigers will finish things out on a high note.

“These kids are pretty resilient. Again, we’ve had some obstacles to overcome, but this group just works hard,” she said. “They live for the next ball or the next point or the next game. They don’t dwell on the bad things and that’s what’s so fun about these girls. They just live for the moment and deserve to have a great season and I’m pretty sure that’s going to happen.”

Rahmig said her team needs to have a short memory and prepare for their final opponents of the season. The Bulldogs travel to Grant for the SPVA tournament this weekend before finishing out the regular season at home against Gering next Thursday. Her message was simple, play hard and play to win.

“We just have to go out and play with intensity,” she said. “We have to play at the level we’re capable of playing and not play cautious.”

Mitchell will next be in action on Monday in a triangular with Creek Valley and Bayard at Creek Valley. Bridgeport travels to Grant for the SPVA tournament on Saturday.

'Lift Every Voice and Sing' hymn ignites hope across nation