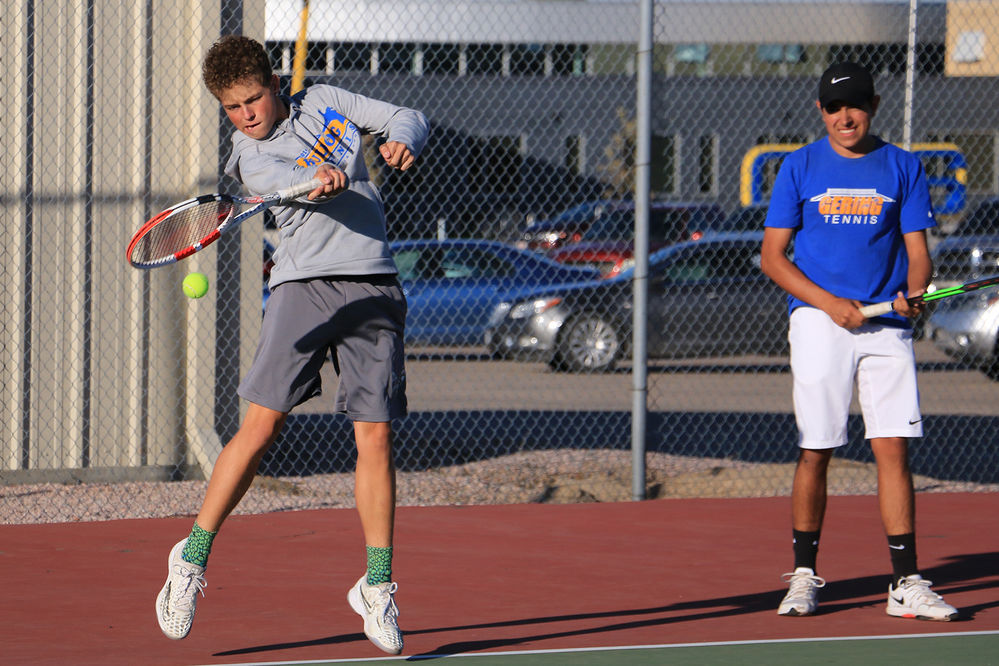 Gering's Dyson Dollarhide hits a shot while teammate Mark Karpf looks on during practice on Tuesday, Oct. 15 in Gering. 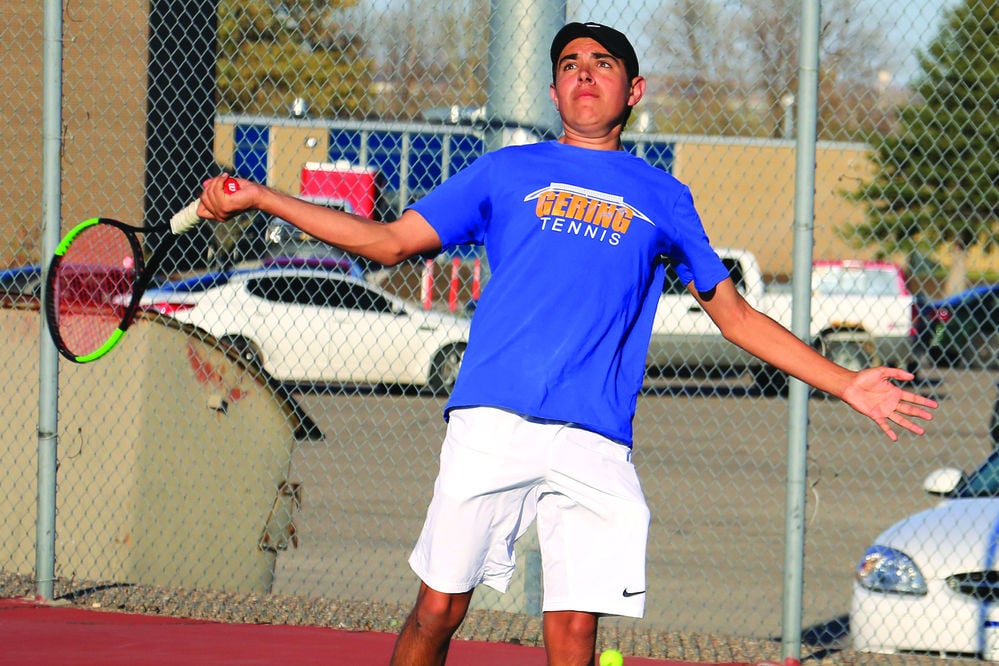 Gering’s Mark Karpf hits a shot during practice on Tuesday, Oct. 15 in Gering. 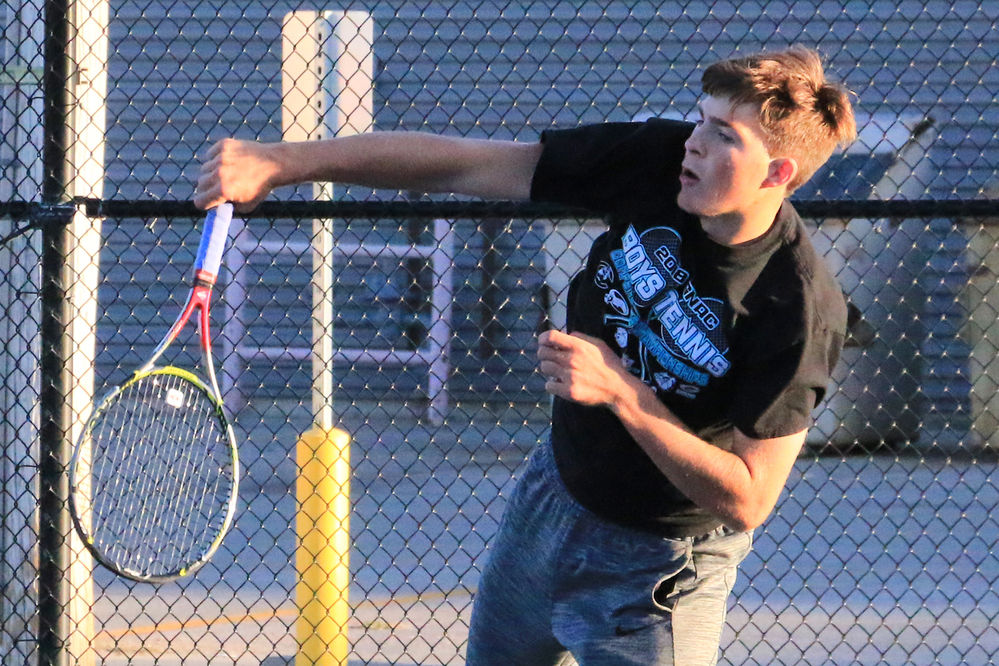 Scottsbluff's Dawson Mohr practices against his father Paul Mohr Jr. on Tuesday, Oct. 15 in preparation for the upcoming state tennis tournament in Lincoln. The state tournament starts on Thursday, Oct. 17.

Gering's Dyson Dollarhide hits a shot while teammate Mark Karpf looks on during practice on Tuesday, Oct. 15 in Gering.

Gering’s Mark Karpf hits a shot during practice on Tuesday, Oct. 15 in Gering.

Scottsbluff's Dawson Mohr practices against his father Paul Mohr Jr. on Tuesday, Oct. 15 in preparation for the upcoming state tennis tournament in Lincoln. The state tournament starts on Thursday, Oct. 17.

The Scottsbluff and Gering boys tennis teams are taking two of their most competitive teams ever to the state tournament in Lincoln.

The Class B state tennis championships begins Thursday morning at the Woods Tennis Center in Lincoln.

Scottsbluff and Gering both go into the tournament with three seeds.

Gering coach Ron Swank said the byes will give his singles players a chance to catch their teammates in action.

Mohr will face Hogan Wingrove of Waverly in the second round.

Mohr said he’s been facing a familiar foe to get ready for the tournament.

“I’ve been practicing a lot with my dad (Paul Mohr) recently to prepare for the competition that’s going to be at state,” Mohr said. “My dad’s really helping me get up to pace.”

Mohr said getting that first win is the first of his goals at state.

“If I get past the first match then work toward winning it all. That’s always the goal,” he said.

“He does have experience because he played (in the state tournament) last year as a sophomore,” Emerick said. “That takes a lot of pressure off. I find that most kids are usually super-nervous their first time at state. He got there last year and played. I think the bye gives him a little bit of an advantage because it gets him to the warmer part of the day.”

“(Barret has) played a lot of really good players,” Swank said. “He’s a 50-50 (winning percentage) guy. He’ll be no slouch. They never are coming out of Omaha Skutt Catholic.”

“This is their second year at state (for Frank and Robbins),” Emerick said. “They’ve improved dramatically. They’ve taken their game from a good solid doubles game to an exceptional attacking doubles game.”

Swank said Dollarhide and Davis will have to play a consistent game to advance in the tournament.

“If doubles play like they’re capable (they should make it to the second day of the tournament). They play in streaks. They play lights out, then they go away,” he said.

In No. 2 singles, Gering’s Hunter Walker (19-9) enters the tournament with a fifth seed.

Unseeded Kade Huck, of Scottsbluff, will face Kearney Catholic’s Creed Martin in the first round in No. 2 singles.

“My goal is for (Kade Huck) to play a high level of tennis,” Emerick said. “He’s a very competitive player who doesn’t get rattled. I want to take that mindset and that competitive fire and put it into his tennis.”

Swank said Huck will give fits to whomever he faces on the court.

“(Huck) in Scottsbluff is a ninth-grader that got rewarded for working his way up,” Swank said. “He plays a kid from Kearney Catholic. He’ll wear down (anybody he plays). He’s really good.”

Walker will play the winner of that match, and Swank said fatigue could play a factor in that match. Whomever Walker faces in the second round will only have a half-hour to an hour of rest before the match.

In No. 2 doubles, Aaron Schaff and Ethan Ramirez have the 10th seed for the Bearcats.

Schaff and Ramirez have a first round bye. They will take on Lexington’s Eli Yound and Damian Salinas, whom also have a first-round bye, in the second round.

Swank said his No. 2 doubles team of Noah Moreno and David Karpf have potential to do well in the state tournament.

“Noah is really new this year, but he hits a beautiful ball,” he said. “It’s just learning where to go with the ball. David’s got good hands. He will be a stalwart for us next year.”

Karpf and Moreno drew Mark Crane and Aakash Mehta of Omaha Brownell Talbot/Concordia in the first round.

Both teams were on their respective courts on Tuesday, Oct. 15, getting in some practice before hitting the road on Wednesday.

Emerick said his team wasn’t working specifically on its game.

“I’m a big believer in tennis is more in your mind than anything, then your footwork and then your strokes. A lot of times people get those reversed. It’s a very mentally challenging game. It’s a lot like boxing. It’s very one-on-one.”

Alliance will also take some players to the state tennis tourney.

Alliance’s Bryson Darveau will compete in No. 2 singles. In No. 1 doubles, Chance Crowe and Devin Garcia earned the eighth seed for Alliance. They have a first-round bye.

At No. 2 doubles, Alliance’s Tory Picket Pin and Kysen Walker will play Omaha Roncalli Catholic’s Samuel Solis and Noah Hering in the opening round.

Antetokounmpo has triple-double as Bucks down Bulls 111-98

The Latest: Raonic finishes off quickly on Day 2