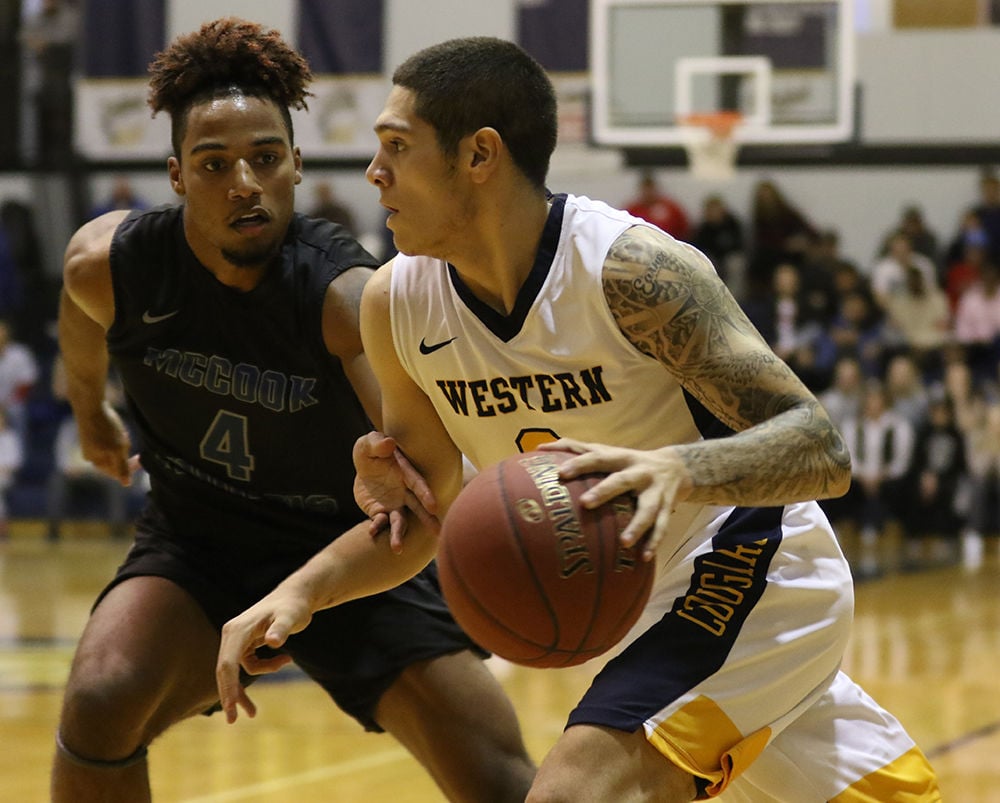 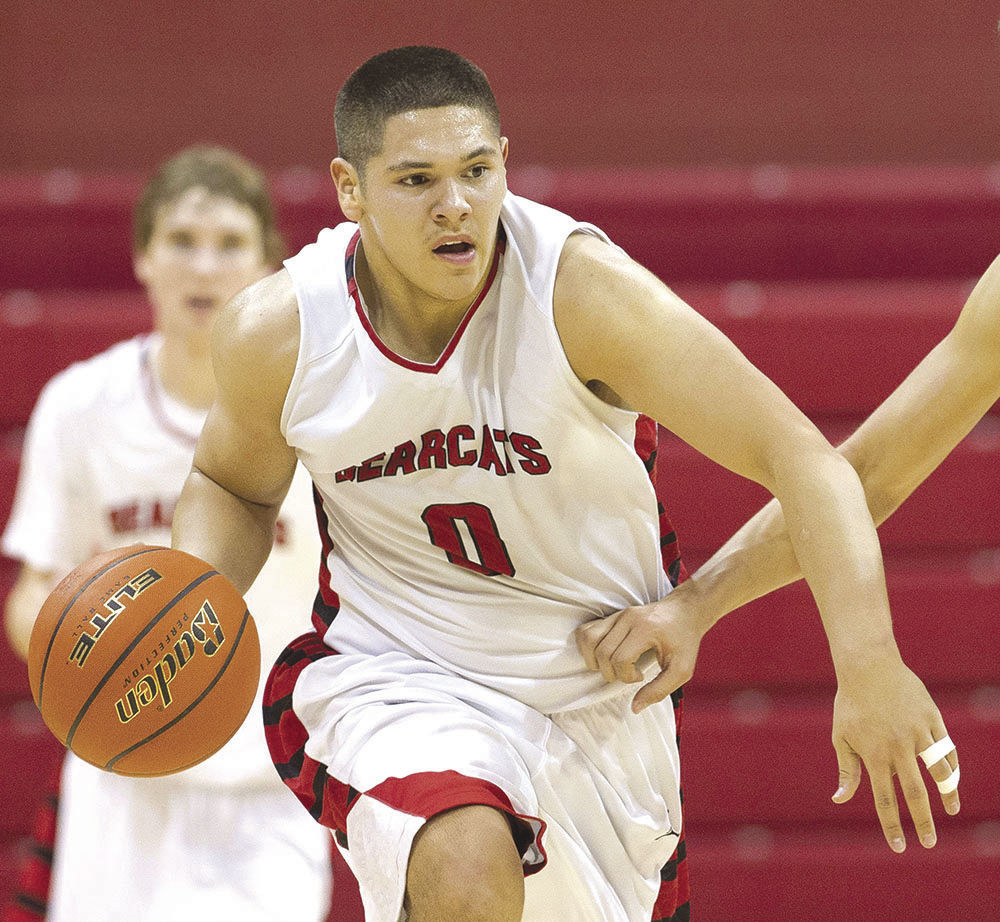 Scottsbluff’s Dru Kuxhausen dribbles against Crete during a first-round game at the Class B state tournament on March 9 in Lincoln. Kuxhausen, who helped lead the Bearcats to a second straight runner-up finish at state, finished his career as Scottsbluff’s all-time leading scorer. He’s been named the Star-Herald’s All-Region Boys Basketball Player of the Year for a second time. 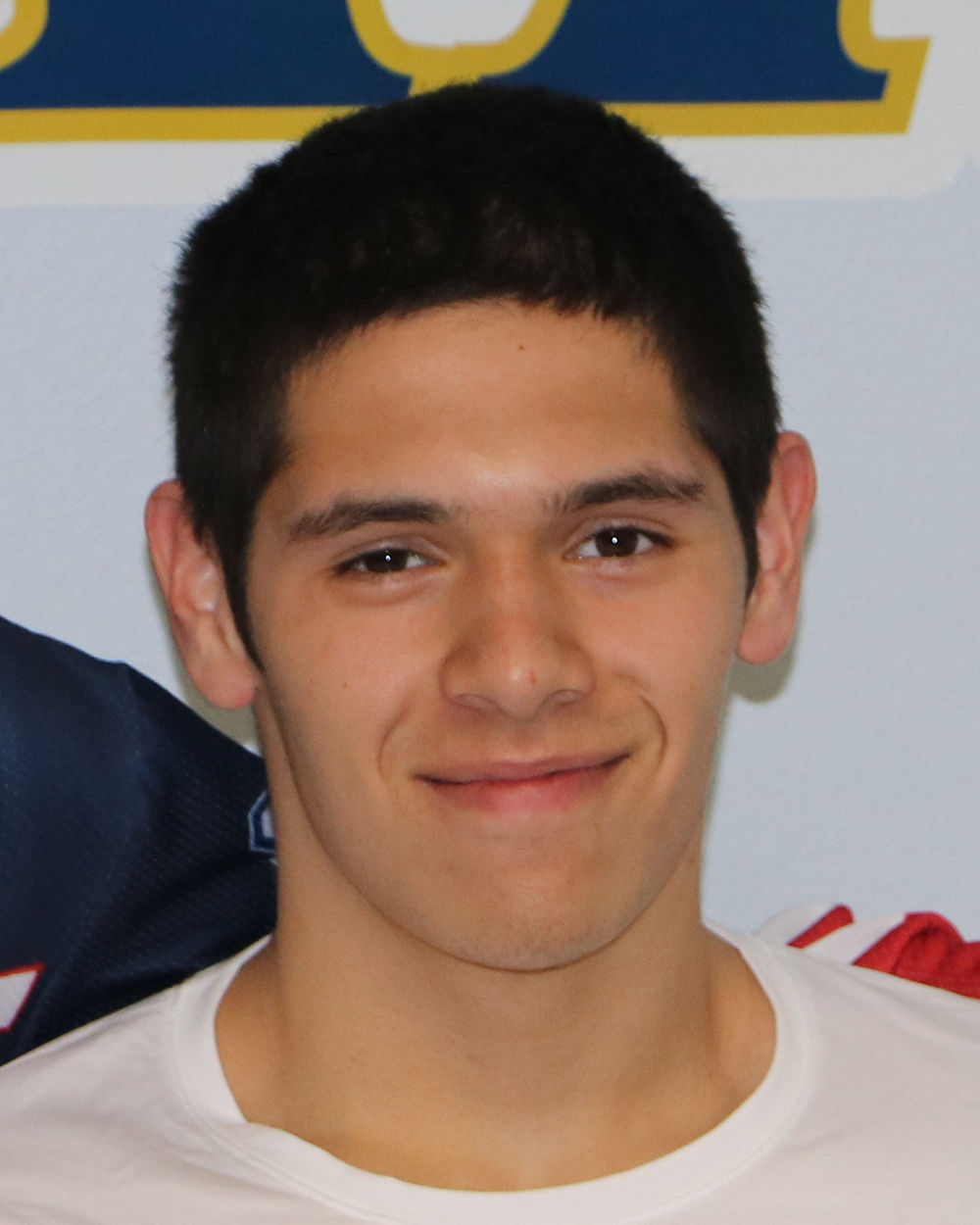 Scottsbluff’s Dru Kuxhausen dribbles against Crete during a first-round game at the Class B state tournament on March 9 in Lincoln. Kuxhausen, who helped lead the Bearcats to a second straight runner-up finish at state, finished his career as Scottsbluff’s all-time leading scorer. He’s been named the Star-Herald’s All-Region Boys Basketball Player of the Year for a second time.

Dru Kuxhausen’s hard work on the court is paying off as the Scottsbluff graduate and former Western Nebraska Community College basketball player is excelling at McNeese State in his junior year.

Kuxhausen said everything is going well for him at the NCAA Division I university in Louisiana.

“It is going pretty good so far,” Kuxhausen said. “It was good for me to get down here in the summer and learn the offense and get to know the coaches. First of all, that helped me the most being able to come here for the summer workouts. Not only that, just being able to do (the workouts) through the pre-season has been good. Since we started playing games three weeks ago, it has been real competitive. We just need to find a way to start winning some games now.”

McNeese State is currently 2-5 on the season with their next game Saturday, Nov. 30 when they travel to face the Texas Longhorns. Kuxhausen said his team can play with anyone, what they are having trouble with is playing a full 40 minutes.

“I think the thing with us is we don’t have a problem coming into games and playing big schools, I think we start every game off real strong and then toward the end we just don’t have enough in us,” he said. “I think that is something that we will get worked out real quick. I think it has been good for us to play some of these bigger teams because it allows us to see the competition we will be playing against and we are playing a lot of top schools, which will help us get better when conference comes.”

Kuxhausen has started all five games for McNeese State, but he said helping the team is his main goal.

What Kuxhausen has accomplished in the first month of the season has put his name on the radar. Kuxhausen led the NCAA in 3-pointers made for a couple weeks. Right now he sits second behind Nevada’s Jazz Johnson. Johnson has made 32 treys while Kuxhausen has buried 29.

Kuxhausen said leading the nation isn’t that important because he doesn’t want to be a one-dimensional player.

“It is something that is real cool, but it is also something that I really don’t want to think about too much,” he said. “First of all, it doesn’t matter really. Second of all, I don’t want to be a one-dimensional player always looking to shoot and make threes so I can stay on top of the list. That is not my goal. It is cool to have that out right now to say I can do this and play with these guys. Now, I have to continue to get better.”

Kuxhausen is also known for his excellence at the charity stripe. He is a perfect 7 of 7 from the free-throw line.

There are seven players that are also perfect in the NCAA in the stat category with at least 15 or makes to lead the stats. Kuxhausen doesn’t have the minimum attempts yet, but everyone knows how accurate his free throw shooting was in high school and junior college.

Kuxhausen credits his deft shooting touch to his dad, AJ, for teaching him shooting at a young age.

“I take pride in my shooting in general. Free throw shooting is something I take real pride in,” he said. “That is one thing that my dad taught me to do when I was growing up was how to shoot, and free throws was one of the most important parts of the game. Just putting in a lot of time and keep working on it, because that is something that a lot of people don’t work on.”

Kuxhausen was a standout basketball player at Scottsbluff High School where he scored 2,110 career points, where he ranks 17th all-time in the state. He averaged 11.5 points his freshman year, 14.2 his sophomore year, 21.9 his junior year and 28.5 his senior year.

At WNCC last year, Kuxhausen averaged 19.1 points, 3.4 rebounds and three assists per game. He connected on 51% from the 3-point line, sinking 119 of 234 treys, ranking fifth in the nation. He also shot 89.1% from the free throw line. Kuxhausen also scored in double figures 27 times.

One of his biggest games he has played this season so far was the New Mexico game and that was because he had his mom, dad and his cousin Eddie Salazar in attendance when McNeese State made the trip to New Mexico.

“It was fun to go to New Mexico and play a pretty good game because both my parents were in attendance,” he said. “That was the first time I saw them in six months, so for them to come and watch me play in New Mexico and to show them what I have been working on since I have been away from home was nice. It was nice to see them and talk to them again.

“My cousin Eddie Salazar came up and I got to see him. I am glad he got to come, too, because that dude literally, every team I played on he has came to watch. I am telling you since grades third, fourth, fifth grade trips to seventh and eighth grade all through high school, WNCC and now. I am glad he got to watch me play because it is always special when he can make it to games.”

In that game, Kuxhausen finished with 21 points and seven 3-pointers.

“The New Mexico game was a lot of fun for me because I was able to hit some three pointers right off the bat to allow me to get going,” he said. “My teammates did an amazing job of finding me and getting me open in my spots. Once that happened, I was just able to hit some shots.”

People around the Panhandle know what kind of a gym rat Kuxhausen is — he practically lives in the gym. His success at McNeese State is happening because he went down over the summer to the campus to workout and to get know the offense.

“This summer I definitely was in the gym. When I got down here I was in the gym trying to work out and go in as many times that I can,” he said. “During the summer I was trying to get in 500 makes a day. I was able to stay in the gym a lot during the summer. It still is pretty easy to stay in the gym now because I usually try to go at night to get some work in. The facilities here at McNeese is good, there is everything to get better.”

Out of high school, Kuxhausen signed to play at Chadron State College. That lasted one year and he transferred back to Western Nebraska Community College, the same school his father played at in the mid-1990s alongside Bobby Jackson. Kuxhausen said that year at WNCC was the best move he has ever made.

“My year going to junior college is what really changed everything around for me,” he said. “I wasn’t real happy at Chadron and I wasn’t having a good year and then I got on the WNCC team with Cory [Fehringer] , Billy [Engel] and Roybell (Baez) and those dudes helped me get my game right working me out every day. They helped me get my body right to where I was losing some bad weight. They took me under their wing and allowed me to play my game and have a good year and move on. I am really thankful I got to play for them at WNCC and in my hometown.”

Now that Kuxhausen is at the Division I level, he is loving it and he is hoping to get even better. His plans after two years at McNeese State is to continue playing professionally someplace.

“I love everything about playing Division I basketball with how much time goes in it,” he said. “Really, this is what I wanted to do for a long time. This was my goal to play Division I. Now that I am here, I am just trying to soak it all in in using these facilities, using my coaches, to get as good as I can in the next two years.”

With his hard work, that shouldn’t be a problem.

“I definitely want to finish my two years in college and then I fully plan on playing after that, trying to play professionally someplace like overseas or here,” he said. “It really doesn’t matter to me as long as I can continue what I am doing.”

Atlético gets Morata, Costa back in time for Liverpool

All-Star weekend, as expected, was about honoring Kobe