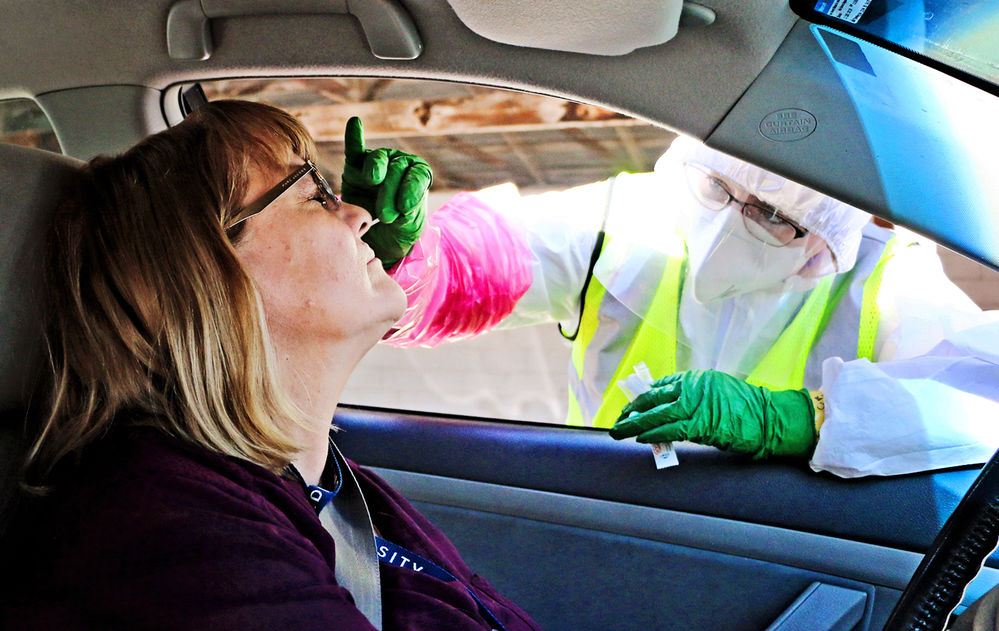 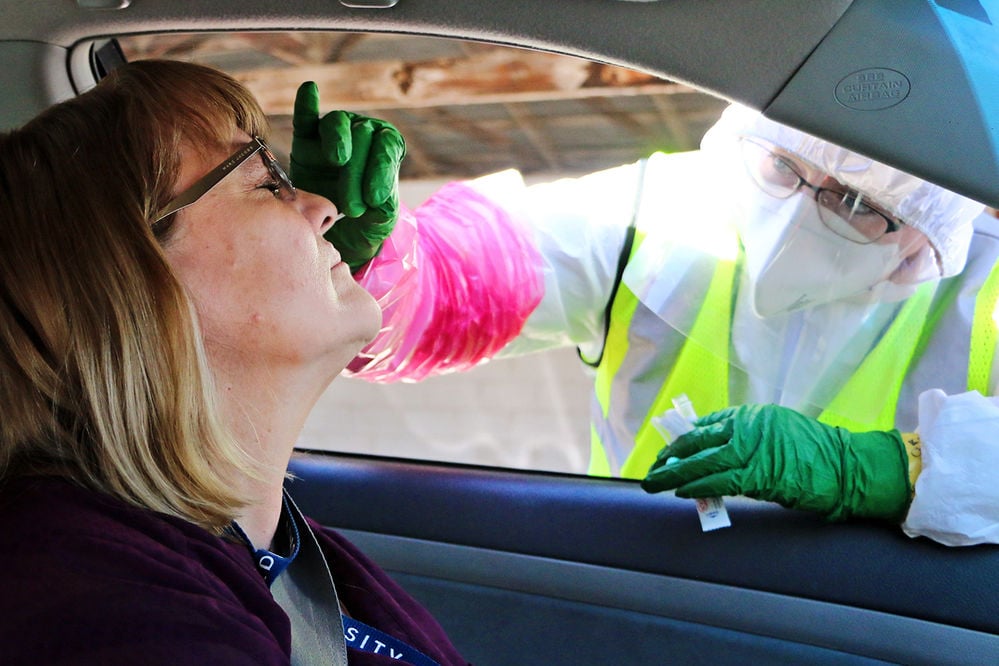 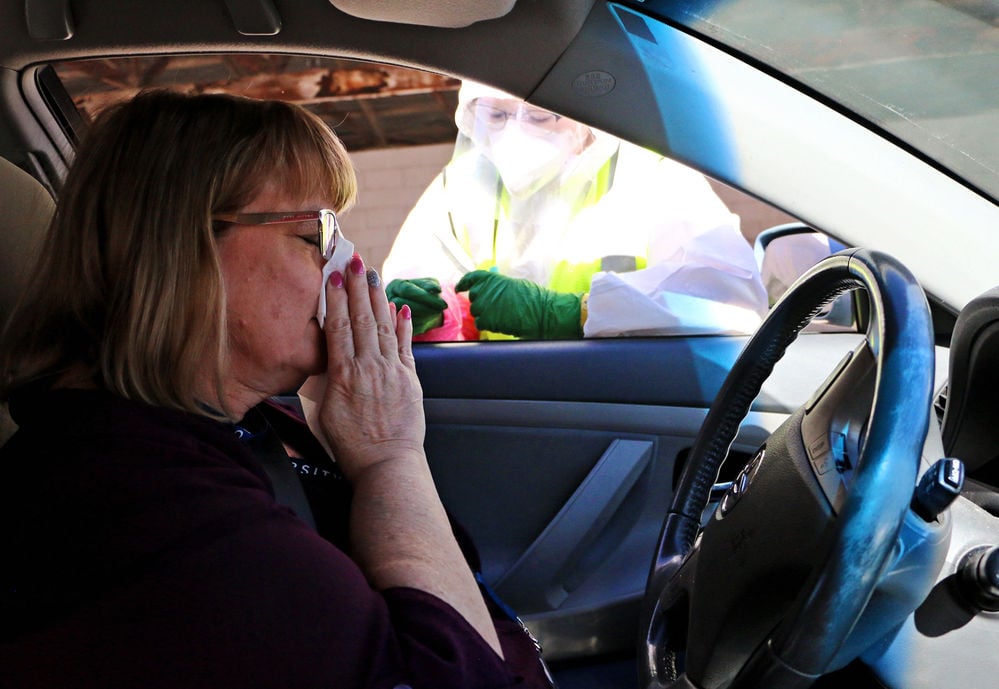 Scotts Bluff County Public Health Director Paulette Schnell blows her nose. It's the first step of getting a coronaviurus test. 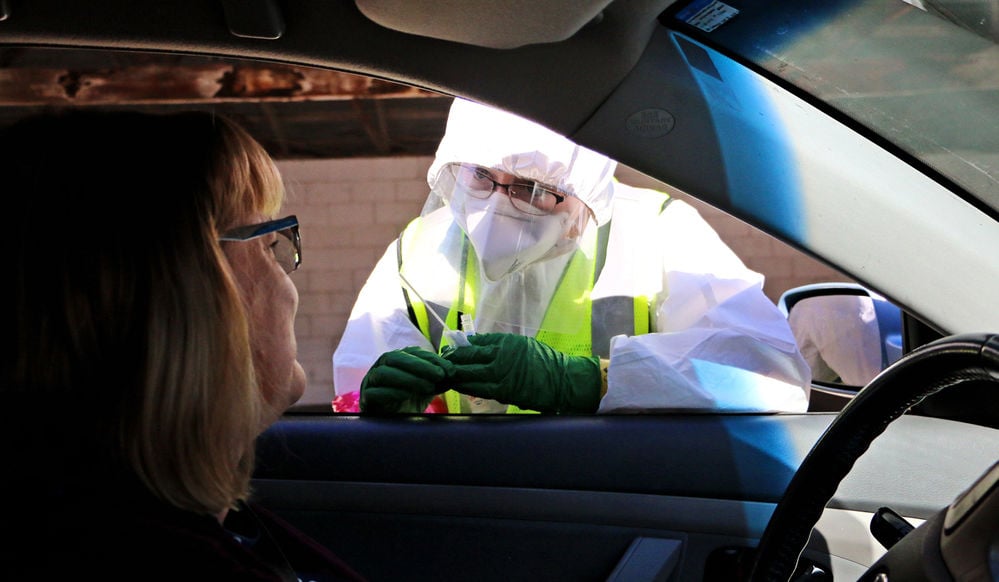 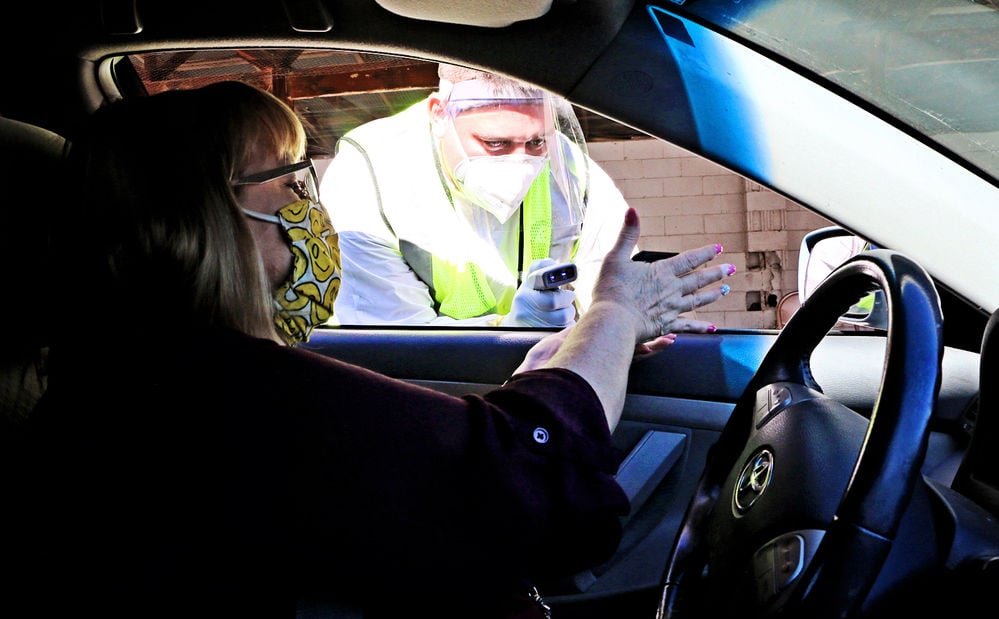 Scotts Bluff County Public Health Director Paulette Schnell blows her nose. It's the first step of getting a coronaviurus test.

Cars were lined up in three rows soon after coronavirus testing done in coordination with TestNebraska began at the Panhandle Public Health District Offices Thursday morning.

Scotts Bluff County Public Health Director Paulette Schnell was one of the first people in line for testing. Like others, Schnell took the TestNebraska.com assessment and met the initial criteria for testing. She has exhibited some minor symptoms — though they could likely be allergies — and with the nature of her job, she has been around persons who have been diagnosed with COVID-19. With elderly family members who she assists with caring for, Schnell said she took advantage of the free testing available in the community.

Over the two-day period, 600 tests have been set aside through the TestNebraska program. The criteria for the testing is set by TestNebraska, with the initial invitations to be sent to persons who are symptomatic or at high-risk. Schnell said that as those testing slots are alloted, she expects persons who did not initially qualify will be invited to test on Friday.

“(Response) has been good, but we could have even more sign up because we have more slots (Friday),” she said. “We are really encouraging people to take that assessment.”

People who are symptomatic or been in contact with someone who has tested positive for COVID-19 are encouraged not to wait until testing, such as TestNebraska, comes to town but to contact their physician. However, Schnell said, the testing does have advantages.

“What this does is take away that barrier of having to go to your doctor’s office,” she said. “If you are symptomatic, don’t wait for an event like this, but if you happen to be symptomatic when they come to town, it is a great opportunity. It’s also great for those people who are in those high-risk groups.”

She said that the downtown location for testing Thursday and Friday had been specifically selected because it was a central location that would make it reachable for persons who work or persons without transportation.

To qualify for testing, persons need to take an assessment, which is available at TestNebraska.com. If you do not have a computer, you can contact Panhandle Public Health District, 308-262-5764, for assistance.

While the National Guard is here, strike teams will do TestNebraska testing at other locations that have been identified by local health officials. Schnell said that health officials have identified some area group homes, long-term care facilities and other types of organizations for testing.

In the Panhandle, Schnell said, a lot of the cases have involved persons suffering from mild symptoms. She said teens specifically have had mild symptoms, which can be an issue when they gather with each other and expose parents and grandparents.

The directed health measure in place now expires on May 31.

“We have been able to flatten the curve and we are maintaining that hospitals are able to handle what has been there. We’re not experiencing that surge that we wanted to avoid and that is what Gov. Pete Ricketts has been using as a measure.”

The directed health measures in place now expire on May 31. Ricketts announced updated health measures that will take effect in June during a press conference on Thursday, including the relaxation of gatherings from 10 to 25 and other measures. Travel restrictions limiting out-of-state travel have immediately lifted. Panhandle Public Health District officials noted that some entities, such as daycares and others, may still opt to have tighter restrictions. Rickett’s newest measures will be detailed on the Panhandle Public Health District website, pphd.org, and are also on the governor’s website, governor.nebraska.gov.

In the coming weeks, even as health measures loosen, people are still urged to follow health measures such as wearing masks when going to public locations where social distancing is not able to be maintained such as grocery stores and shopping, washing hands and monitoring your symptoms.

Health officials know that there will be cases of the coronavirus that continue to occur in the community. However, the key point of measures has been to prevent an overload on the health care system and the impact on high-risk groups.

“If people can be wise — social distancing, washing hands, wearing masks — and keep our keep our numbers low and keep from spreading it (coronavirus) to those high-risk people and being smart about being together, the health measures are going to continue to loosen,” she said.

As new directed health measures are put into place, she said, conversations continue with the governor and his office on guidelines that are released by health officials to entities, such as has been done with restaurants, churches and the like. Schnell said that health officials have seen some venues that aren’t following directed health measures and she encourages people to support those that are.

Health officials expect that some sort of health measures will be in place until a vaccine is produced. Once that happens, Schnell said she anticipates that the vaccine will be first made available to those in high-risk categories, such as those who are 65 years and older.

In the meantime, she said, health officials do realize — and it is even part of their training — that people will tire of health measures or that they may be controversial. She said that state officials have even discussed the phases of a pandemic in planning.

“With this, it’s not going to end next week,” she said, saying that national health officials and epidemiologists are predicting a second wave of the virus in the fall. For the state of Nebraska, it’s estimated that second wave could occur in October.

During Thursday’s Panhandle Public Health District’s daily briefing, two more cases were announced in Scotts Bluff County: one man in his 40s and another man in his 70s. The total number of cases in the Panhandle since March 2 are 89, with 64 people having recovered.